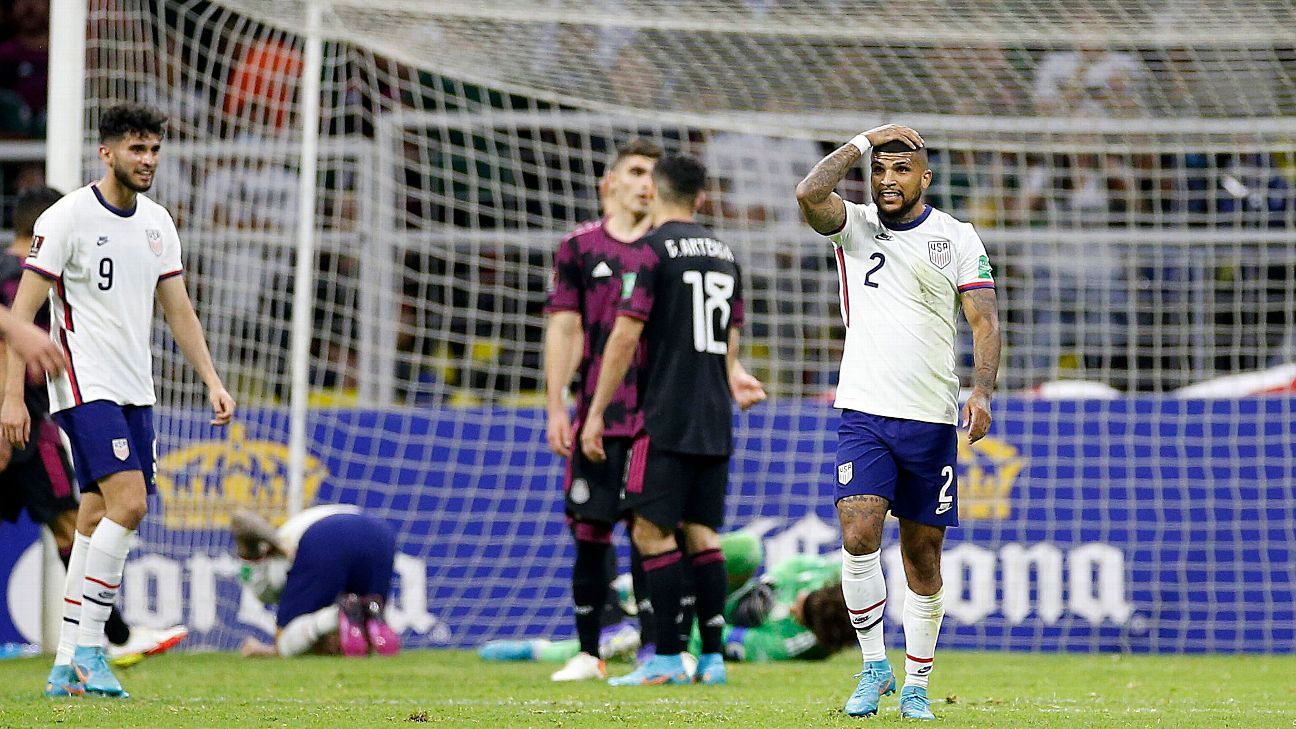 MEXICO CITY — When the final whistle blew, bodies started dropping. The Estadio Azteca was every bit the energy sucking force the young United States men’s national team had been warned of and after 90-plus minutes, there was nothing left in the tank. Even striker Jordan Pefok, a 60th-minute substitute, immediately dropped to the prone position, exhausted, after the U.S. secured a massive point in a 0-0 draw with Mexico. No one was spared.

Therein lied the dilemma, something U.S. coach Gregg Berhalter acknowledged. By playing what amounted to a first-choice starting XI, he risked wearing out those players — with just two days of recovery before a more pivotal game against Panama on Sunday — and getting nothing to show for it.

– O’Hanlon: Why the draw in Mexico was one of U.S.’s best performances (E+)
– How U.S., Mexico and Canada can qualify
– USMNT draws at Mexico: How social media reacted

For now, though, the point appears to be worth the cost. Had there been a momentary breakdown in defense, Berhalter would have been villainized. Had Christian Pulisic or Pefok put away their close-range chances, a World Cup qualifying win at the Azteca would have served as a crowning achievement.

The gap between resounding success and utter failure can be almost nonexistent.

“It was definitely a tough game. It took a lot out of us,” Pulisic said. “I’m really proud of the way that the guys just put in a shift and the effort to make sure that we got that point at the end was really big. We put ourselves in a position to play on Sunday and win and go to the World Cup.”

Ultimately, that is the lens through which the entire qualifying cycle will be viewed, and nothing else matters.

Berhalter maintains there is plenty of time to recover from playing at the Azteca, but other teams have fared poorly in similar circumstances throughout qualifying. After losing 2-1 at Mexico on Sept. 2, Jamaica lost 3-0 to Panama at home three days later. Canada backed up its 1-1 draw at the Azteca with a 0-0 draw at home against Jamaica. Honduras lost 2-0 to Jamaica three days after it made the trek. Only Costa Rica, which also drew 0-0 at Mexico, backed up its Azteca journey with a win in the next game within the same window, beating Jamaica 1-0.

That sample is small enough to where those results might not be indicative of anything, but common sense dictates fatigue will be a worthwhile concern, necessitating at least some squad rotation.

Yedlin, right, will miss Sunday’s game vs. Panama due to suspension, but does this squad have enough energy left to get the needed result in Orlando? Gary Coronado / Los Angeles Times via Getty Images

At two positions, Berhalter doesn’t have a choice. Both right winger Tim Weah and right-back DeAndre Yedlin will be unavailable due to yellow card accumulation. Setting aside the CONCACAF absurdity of a suspension for two yellow cards over 12 games, these are two positions that seem to have obvious replacements.

Gio Reyna, perhaps aided by Mexico’s tired legs, was a revelation after he replaced Weah in the 60th minute, and he needs to be on the field from the beginning. He missed several months with a hamstring injury and only recently returned, but he did play the full 90 for Dortmund before the international break. If Dortmund thinks he can play those minutes against FC Koln, there’s no justification for leaving him on the bench with a World Cup berth on the line.

“You could see that he’s stronger, he looked quick and he’s getting fit,” Berhalter said of Reyna. “When he gets 100% fit, he’s going to really help this team for longer stretches, but I thought he had a solid performance [against Mexico].”

With Yedlin out, Reggie Cannon unavailable after testing positive for COVID and Sergino Dest not with the team due to injury, Berhalter called in Shaq Moore, who is playing for Tenerife in Spain’s second division. Moore started all six games of the United States’ Gold Cup matches, during which they didn’t allow a goal from the run of play, but has appeared just twice in qualifying. His lone start — and last appearance — came in the United States’ first World Cup qualifier against Panama, a 1-0 loss during which he was pulled after 55 minutes.

Zack Steffen will remain in goal and the rest of the backline seems set. Left-back Antonee Robinson and center-back Walker Zimmerman have emerged as two of the team’s most indispensable players, and the idea of breaking up the successful Zimmerman-Miles Robinson partnership at this stage to introduce Aaron Long, Erik Palmer-Brown or James Sand doesn’t make sense.

In midfield, Berhalter said Tyler Adams should be ready to go. It’s conceivable Yunus Musah could be on the bench after he went 90 minutes, but he’s too important for that to be the expectation. The obvious spot to rotate is the other advanced midfield role, where it makes sense for Luca de la Torre to come in for Kellyn Acosta. Acosta has more defensive bite, which was important against Mexico, but against Panama at home in a game the U.S. should look to dictate play, De la Torre’s ability to progress the ball and create is better served.

Pulisic didn’t have his best game against Mexico, but he has been brilliant of late for Chelsea and it’s inconceivable he could be dropped.

The most interesting decision Berhalter has to make is what to do at striker. Neither Ricardo Pepi nor Pefok did anything to inspire confidence against Mexico, while Jesus Ferreira — fresh off his first Major League Soccer hat trick with FC Dallas — will be fully rested.

In the first game at Panama back in October, Berhalter heavily rotated his team, using seven new starters compared to the previous game — the lack of continuity negated any possible gains he was hoping to get from fielding a fresh team. The U.S. managed just 0.24 xG — by far its worst showing during qualifying — in a 1-0 loss and its press was ineffective, something that’s seemingly influenced Berhalter’s player selection ever since.

“We were hoping with this lineup that we’re going to get that get mobility and we didn’t play our best,” Berhalter said at the time. “We had a number of guys that performed below the expectations.” Six players who started that game — Mark McKenzie, George Bello, Sebastian Lletget, Paul Arriola, Gyasi Zardes and Moore — have since combined for just one start (Zardes against Canada) and 117 minutes (Zardes, 90 minutes in three appearances; Arriola, 27 minutes in two appearances).

That’s all to say the first United States-Panama match shouldn’t be used as a barometer of what to expect on Sunday.

“We knew, obviously, this window is going to put us in position to either qualify or not qualify,” Berhalter said. “I’m looking forward to getting back home and having a good performance.”

It’s worth remembering that a win against Panama doesn’t guarantee a spot in Qatar. The U.S. would also need Costa Rica to either draw or lose against El Salvador to officially clinch on Sunday. If both the U.S. and Costa Rica win, the the Ticos could pull level with three points when they play each other in San Jose, Costa Rica, on Wednesday. But Costa Rica would also need to overcome the United States’ current seven-goal edge in goal differential to break the tie, meaning a win against Panama would almost guarantee an automatic bid for the Americans in Qatar.

If the United States loses or draws, it opens multiple nervy scenarios that would require a result in Costa Rica on the final match day, a place where the team is 0-9-2 all time.