Whether it’s making rash decisions or feeling grumpy, hunger can make us think and act differently — “hangry,” even. But little is known about how hunger signals in the gut communicate with the brain to change behavior. Now, Salk scientists are using worms as a model to examine the molecular underpinnings and help explain how hunger makes an organism sacrifice comfort and make risky decisions to get a meal.

Their latest findings, published in PLOS Genetics on May 5, 2022, reveal that proteins in intestinal cells move dynamically to transmit signals about hunger, ultimately driving worms to cross toxic barriers to reach food. Similar mechanisms may also occur in humans.

“Animals, whether it’s a humble worm or a complex human, all make choices to feed themselves to survive. The sub-cellular movement of molecules could be driving these decisions and is maybe fundamental to all animal species,” says senior author Sreekanth Chalasani, associate professor in Salk’s Molecular Neurobiology Laboratory.

Chalasani and team used a tiny worm called Caenorhabditis elegans as a model to determine how hunger leads to behavioral changes. The researchers created a barrier of copper sulfate, which is a known worm repellant, between the hungry wormsand a food source. They observed that if the worms were deprived of food for two-to-three hours, then they were more willing to traverse the toxic barrier compared to well-fed worms.

Using genetic tools and imaging techniques, the researchers then investigated the gut molecules that might be sending signals to the brain. They found that specific transcription factors, proteins that turn genes “on” and “off,” shifted locations in hungry animals. Normally, transcription factors hang out in the cell’s cytoplasm and move into the nucleus only when activated — similar to the way we live at home but go into the office to get work done.

The team was surprised to discover that these transcription factors, called MML-1 and HLH-30, move back to the cytoplasm when the worm is hungry. When the scientists deleted these transcription factors, hungry worms stopped trying to cross the toxic barrier. This indicates a central role for MML-1 and HLH-30 in controlling how hunger changes animal behavior.

In a follow-up experiment, the researchers also discovered that a protein called insulin-like peptide INS-31 is secreted from the gut when MML-1 and HLH-30 are on the move. Neurons in the brain, in turn, make a receptor that might detect the INS-31secretions.

To sum it up: A lack of food leads to movement of MML-1 and HLH-30, which could promote the secretion of INS-31. INS-31 peptides then bind receptors on neurons to relay hunger information and drive risky food-seeking behavior.

“C. elegans are more sophisticated than we give them credit for,” says co-first author Molly Matty, a postdoctoral fellow in Chalasani’s lab. “Their intestines sense a lack of food and report this to the brain. We believe these transcription factor movements are what guide the animal into making a risk-reward decision, like traversing an unpleasant barrier to get to food.”

Next, the scientists will further investigate the dynamic nature of these transcription factors and underlying mechanisms. With further work, these findings could provide insight into how other animals, such as humans, prioritize basic needs over comfort.

Materials provided by Salk Institute. Note: Content may be edited for style and length. 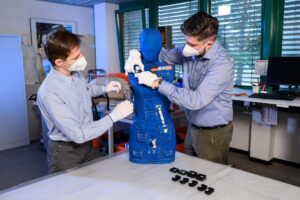 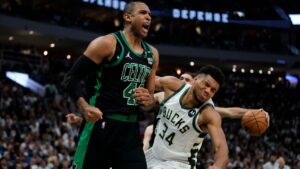 Next post G4 star Horford: Giannis’ actions ‘got me going’

Dental health is so important, and luckily, there are plenty of great foods and drinks that can help keep your...

Keeping your teeth clean and white can be a daunting task, but with these seven tips, it can be easy...

We all know that we're supposed to brush our teeth at least twice a day, but are we doing it...

Did you know that the first thing people see about you is your smile? It can't be denied that a...

When it comes to brushing your teeth, you might think that as long as you're doing it regularly, that's all...

The importance of dental care cannot be overstated. Your oral health is essential to your overall well-being, and neglecting your...