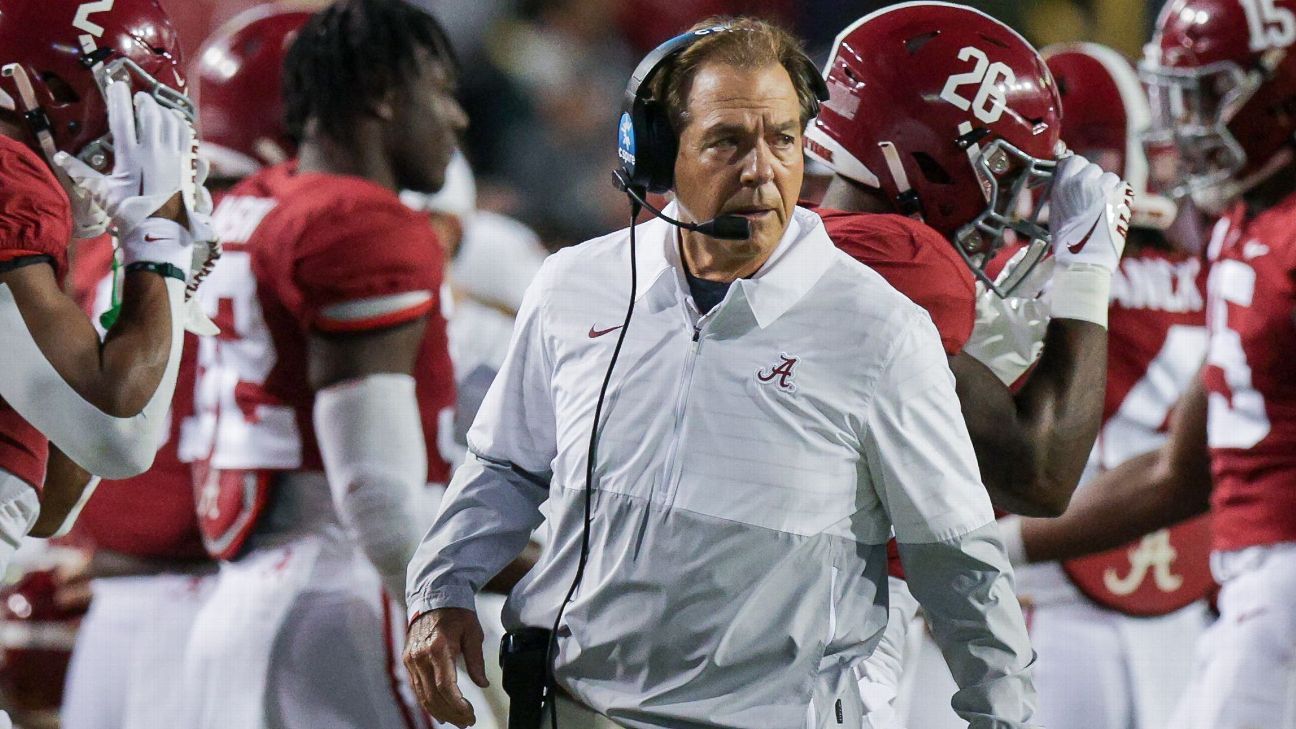 BATON ROUGE, La. — It was too loud and too chaotic inside Tiger Stadium to hear the crash of Alabama’s season late Saturday night. The fall happened so quickly and so unexpectedly it was hard to comprehend in real time. LSU coach Brian Kelly wouldn’t dare go for two, would he? After taking a timeout to think it over some more, surely he’d reconsider, kick the extra point and play for a second overtime. Right?

But he didn’t. Kelly thought he had the perfect play to expose an erratic Alabama defense, and he went for it. Quarterback Jayden Daniels rolled to his right and found an open target in tight end Mason Taylor, who tumbled into the end zone for the score.

What happened next was a scene Alabama has become familiar with this season: an eruption of noise, followed by fans rushing the field by the thousands. Nick Saban and his players, once again, were left to navigate the bedlam and retreat to the safety of the visitors locker room.

Three weeks earlier, Tennessee fans had done the exact same thing when the Vols won on a walk-off field goal in regulation. But instead of the cigar smoke that was hanging in the air in Knoxville, it was fog encircling the stadium in Baton Rouge. And, thanks to some well-placed security, the goalposts weren’t uprooted and thrown into the Mississippi River.

When Saban sat down with the media to try to explain how his team had lost to LSU 32-31, it felt similar to the Tennessee loss. That same resigned quality was in the 71-year-old’s voice. He strained to hear the questions being asked; instead of “Rocky Top” blaring through concrete walls, it was chants of “L-S-U!” And he had the same explanations: too many defensive lapses, way too many penalties, no consistency in the run game, not enough offense around star quarterback Bryce Young.

The most noticeable difference from Saban was a lack of hope. Because it was gone. In order to reach the SEC championship game, Alabama would have to beat No. 11 Ole Miss and Auburn AND hope for an LSU collapse with losses at unranked Arkansas and Texas A&M.

“Look, I can’t blame the players,” Saban said. “I’m responsible for all this stuff. So if we didn’t do it right, that’s on me.”

Credit Saban for not throwing his offensive or defensive coordinators under the bus — or any of his assistants for that matter. But, frankly, they’re all accountable for what has been a failure in coaching this season.

Alabama had the talent to win a national championship, let alone beat a two-loss LSU team that’s still finding its way after a coaching change. Young and outside linebacker Will Anderson Jr. are two of the top three to five players in college football. Recruiting has remained strong thanks to more than a dozen consecutive top-five signing classes, so the depth should be there. What’s more, Saban owned the transfer portal this past offseason, signing all-conference players and Power 5 starters at multiple positions.

Saban said it himself: Last year was the rebuilding season, not this one. Complacency — that old saw — couldn’t be to blame after the Tide came up short in the national championship game against Georgia in January. Veterans Young, Anderson and safety Jordan Battle were convinced during the summer this team was different. They said players were focused and paying attention to the little things in a way they hadn’t before.

So what exactly was missing if not buy-in or talent?

The drop-off at receiver of late has been striking. After producing a flurry of first-round NFL draft picks (including current stars Jerry Jeudy, DeVonta Smith and Jaylen Waddle), Alabama struck gold in the portal with Jameson Williams last season. But the moment Williams was sidelined — first against Auburn, then in the national title game — the passing game cratered.

Maybe it was too much to ask for Jermaine Burton to be another savior like Williams. But remove Burton from the equation (and fellow transfer Tyler Harrell), and it’s a wonder that among Isaiah Bond, Ja’Corey Brooks, JoJo Earle, Traeshon Holden and Kobe Prentice, no one has been capable of becoming a playmaker. What’s more, they’ve been unreliable as a team, with 21 dropped passes — fifth most among Power 5 schools.

Jahmyr Gibbs, a running back, quickly became Young’s most reliable receiver. But for as good and versatile as Gibbs has been, along with his backup Jase McClellan, neither has proved to be the kind of between-the-tackles runner Alabama desperately needs. Roydell Williams, who does run with power, has only 38 carries this season. As a team, 22.9% of Alabama’s rushes have gone for zero or negative yards.

So without the ability to play smashmouth football and without a receiver to stretch the field vertically, the offense has become one-dimensional, and opposing defensive coordinators have been able to blitz at will.

After a loss to LSU essentially eliminated his team from SEC title contention, Nick Saban said, “I can’t blame the players. I’m responsible for all this stuff.” Stephen Lew/USA TODAY Sports

The result has hardly been the kind of offense Young signed up for — the kind of dynamic attack that benefited his predecessors at quarterback, Tua Tagovailoa and Mac Jones. Playing behind a shaky offensive line, Young has had to run for his life. He has been contacted on 22% of his dropbacks this season and was pressured on 44% of his pass attempts against LSU.

Remove drops and throwaways, then adjust for air yards, and Young’s adjusted completion rate of 78.0% is the best in the SEC. In other words, he’s playing up to — and maybe even surpassing — his play from last season, when he won the Heisman Trophy.

But even he can’t overcome a flawed team like this one. He can’t make up for a defense that has made a habit out of giving up big plays, whether it was in the close call at Texas or losses on the road to Tennessee and LSU — not to mention a near loss at home against unranked Texas A&M (albeit without Young). And he definitely can’t overcome a team that is tied for the most penalties (78) in the FBS.

Let that sink in for a moment. Saban, a stickler in every sense of the word who rages on the sideline against self-inflicted errors, has overseen 671 yards in penalties, an average of 74.6 yards per game. There’s no way to describe this Alabama team other than sloppy and undisciplined. Even coming out of a bye week in which Saban said he thought his team was sharp, the Tide committed nine penalties, including two pivotal pass-interference calls in the fourth quarter.

How will Saturday’s top games affect the College Football Playoff chase? What are the current odds for the top four? The Allstate Playoff Predictor has the answers. Check back every week as the odds are updated following that week’s games.

After the loss, Saban called it an “understatement” to say his players were disappointed. This is the first time since 2010 that Alabama has two losses before facing Auburn in the Iron Bowl. Saban said they were capable of more, but “sometimes we beat ourselves and it’s kind of hard to overcome.”

Saban asked his team to “check their hole card” as they look to finish the season strong. Players had their own stock to consider, he said, as well as reaching the goal of winning 10 games.

That last comment was odd. Alabama talks a lot about playing up to the standard, but that usually means championships, whether SEC, national or both. While winning 10 games would be a nice feather in the cap, it’s hardly what anyone in or around the program has come to expect. Remember, this is a program whose strength coach once destroyed the championship runner-up trophy.

Crimson Tide fans will want nothing less than to get back to the playoff next season. But is that even possible? Young, Anderson and a handful of NFL draft hopefuls are likely to move on. And staff departures seem likely. Saban hasn’t specifically called out offensive coordinator Bill O’Brien, but he has been asking for more balance for a while now and hasn’t gotten it. Saban said he wouldn’t second-guess the offensive game plan against LSU, but then added, “Whatever we did, we put ourselves in a position to do that and just came up short.” That’s not exactly a ringing endorsement.

Regardless of who goes and who stays, something has to change. Georgia is threatening to win a second national championship and become the power player of the SEC, and Tennessee and LSU appear to be serious contenders again after going through coaching changes. To get back on top, Alabama must recapture what made it so successful over the past decade-plus: being a team that not only refused to beat itself, but a team that prided itself on going beyond beating opponents and making them quit.

Maybe that means dialing back on what has become a pass-happy offense in order to reestablish a physical style of play in the trenches. Maybe that means a culture shift on defense where the hard-nosed edge that defined the era of Rolando McClain, Ryan Anderson and Mark Barron is all but gone.

During his radio show in September, Saban hinted at how the mentality of this team shifted of late, which was evident at Tiger Stadium.

“We used to play better on the road than what we played at home because we had some hateful competitors on our team,” he said. “And when they played on the road, they were mad at 100,000 people and not the 11 guys they were playing against. And they wanted to prove something to everybody.”

Not only does this current incarnation of Alabama football allow itself to be affected by 100,000 screaming fans, rather than the other way around, it has made a habit of losing and giving those same people a reason to rush the field and celebrate.

The danger for Alabama is that losing will become such a normal occurrence, fans won’t bother to leave their seats to go anywhere but home. That’s when you’ll know the dynasty is over.

We’re a long way from that, but this season should serve as a warning that the foundation is eroding and work must be done.