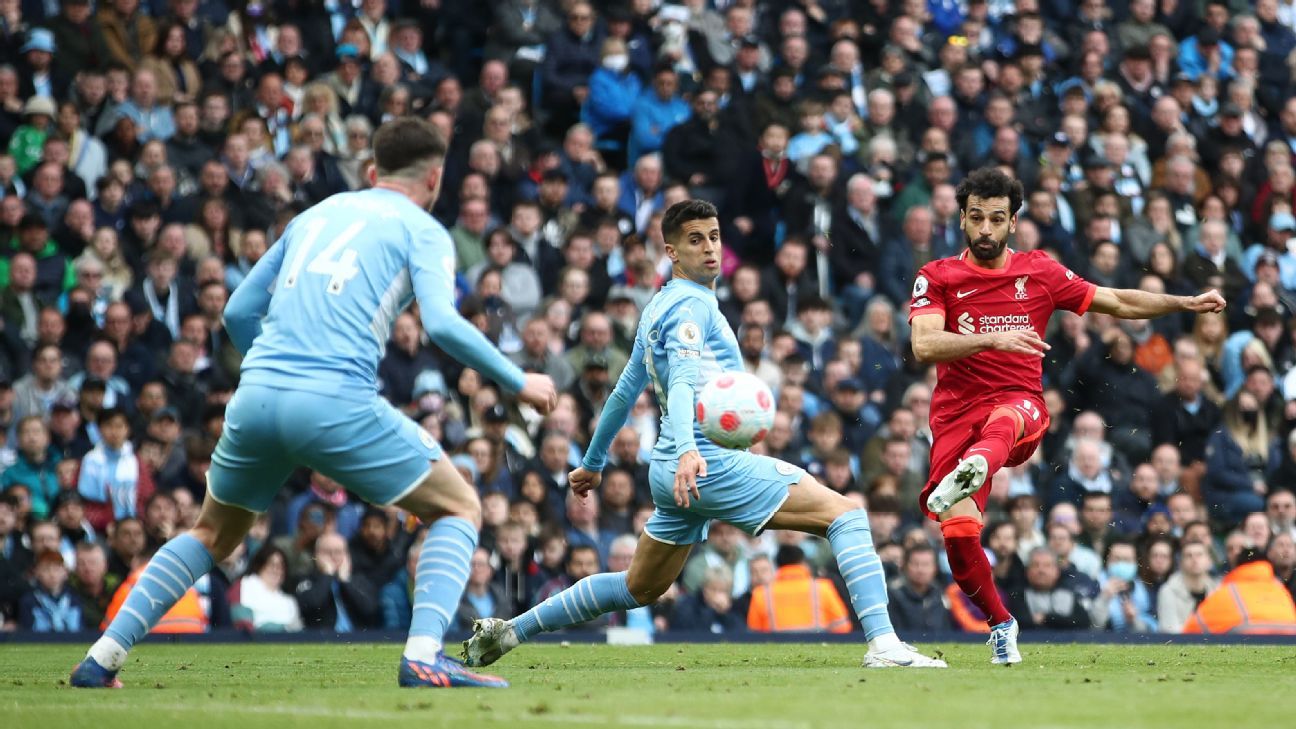 Manchester City and Liverpool have six games left to battle it out for the Premier League title. They couldn’t be separated when they played each other, with both fixtures finishing 2-2, but one team will have to come out on top by the time the league campaign draws to a close on May 22.

City hold a one-point advantage, 77 points to 76, and Liverpool, who have a better goal difference, have a marginally tougher run-in, but there is still plenty of time for twists and turns.

Jurgen Klopp has already raised concerns about Liverpool’s schedule as they try to do what no other English team has done before and win an unprecedented quadruple, having already won the Carabao Cup. Pep Guardiola, meanwhile, saw City’s chances of the treble ended by Liverpool in the FA Cup semifinal at Wembley last weekend, a game that finished 3-2, but could still end the season with the Premier League and Champions League trophies.

Here’s a look at how the title race could play out as we predict their remaining fixtures.

Man City 4-0 Watford (Apr. 23): City were made to work for their 3-0 win over Brighton on Wednesday, but Watford, 19th in the table, should be more straightforward. Guardiola might make changes ahead of Real Madrid’s visit to the Etihad the following Tuesday in the first leg of their Champions League semifinal, but it shouldn’t affect the result.

Liverpool 3-0 Everton (Apr. 24): Liverpool are flying after their 4-0 demolition of Manchester United at Anfield, while Everton haven’t won away from Goodison Park since August. They say anything can happen in a derby game — except when one of the best teams in the world meets one of the worst in the Premier League. Liverpool will win comfortably.

Liverpool and Man City are too close to call based on their head-to-head meetings, but playing out the rest of the season, who will come out on top in the Premier League? Chris Brunskill/Fantasista/Getty Images

Newcastle 2-2 Liverpool (Apr. 30): This is a tough game. Liverpool host Villarreal in their Champions League semifinal, first leg, on the previous Wednesday and then have an early kick-off on Saturday against Newcastle, who haven’t lost at St James’ Park in the league since December. The schedule is a manager’s worst nightmare — Klopp has already highlighted the tight turnaround –and Liverpool will have to be at their very best to avoid dropping points.

Leeds United 1-3 Man City (Apr. 30): In contrast to Liverpool, City face Real Madrid on the Tuesday and have been given the 5:30 p.m. kick-off slot on the Saturday at Elland Road. In terms of preparation time, City’s players will get an extra 30 hours to recover. It might not seem a lot, but a title race this tight is often decided by fine margins.

Liverpool 3-2 Tottenham (May 7): Liverpool have a tougher run-in than Man City, and this is the pick of their games between now and the end of the campaign. Liverpool travel to Villarreal on the Tuesday before meeting Spurs, who will be desperate for points as they try to qualify for next season’s Champions League, on the following Saturday.

– Marcotti: Where does soccer stand one year after Super League collapse?
– Stream ESPN FC Daily on ESPN+ (U.S. only)
– Don’t have ESPN? Get instant access

Man City 4-1 Newcastle (May 8): Newcastle have been much improved since January, but away from home, they still managed to lose at Everton and were hammered 5-1 at Tottenham. It will be too much for Liverpool fans to expect Eddie Howe’s team to get something at the Etihad, even if City are playing their Champions League semifinal second leg in Madrid four days earlier.

Liverpool 3-0 Aston Villa (May 10): Steven Gerrard will get a hero’s welcome on his return to Anfield, though it should be a straightforward evening for the hosts given how little Villa have to play for. Gerrard won’t make things easy for his former club, but Villa have lost their last four games and it looks like they’re counting down the days until the summer.

West Ham 1-3 Man City (May 15): Liverpool are involved in the FA Cup final against Chelsea on May 14, which means they won’t play in the Premier League that weekend. Their supporters will be hoping for a favour from West Ham the following day: Although City lost in the Carabao Cup at the London Stadium in October and drew there in the league last season, they have a good record in East London.

Southampton 1-3 Liverpool (No date): Because of Liverpool’s FA Cup commitments, there isn’t a date yet for Liverpool’s trip to St Mary’s. Southampton are a difficult team to judge — they lost 6-0 at home to Chelsea and beat Arsenal 1-0 in the space of a week — but Liverpool should be too strong against a team comfortably in midtable.

Wolves 0-1 Man City (No date): Wolves have been impressive this season and this has all the makings of a very tight game. It’s another game without a date, but it could be played in the final week of the season and City might get a scare before nicking it late on.

Man City 2-0 Aston Villa (May 22): The dream scenario for Liverpool fans is that they’re neck-and-neck with City going into the final round of games before club legend Gerrard leads Aston Villa to a shock result at the Etihad to send the title to Anfield. But that ignores the fact that Villa have lost all but six games since Boxing Day.

Liverpool 5-0 Wolves (May 22): The final day of the Premier League season at Anfield is likely to be a celebration either way, with Klopp’s side heavy favourites to book their place in the Champions League final on May 28 in Paris at Villarreal’s expense. The fans will give them a good send-off and Liverpool should win comfortably, though it won’t be enough to pip City.