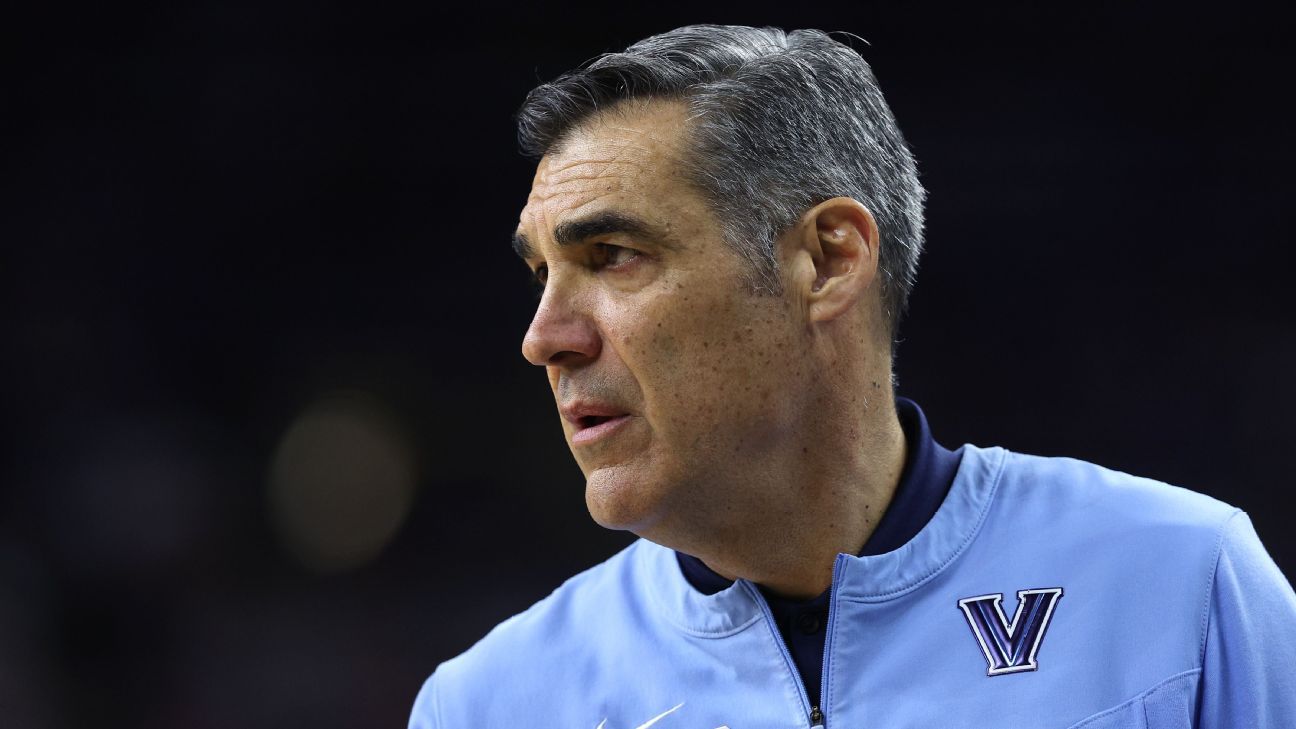 A quiet Wednesday night in mid-April got very loud in quite a hurry within the world of college basketball, as Villanova men’s coach Jay Wright stunned the industry via word of his imminent retirement after 21 seasons, 520 wins, two national championships and four Final Fours on Philadelphia’s Main Line. Wright stepped down just 18 days after leading the Wildcats in their Final Four loss to eventual national champion Kansas in New Orleans.

While the world awaits word from Wright, ESPN’s college basketball team of Myron Medcalf, Jeff Borzello, John Gasaway and Joe Lunardi weighed in on Wright’s accomplishments, where the shock factor of his retirement ranks in college hoops history and what’s next for a storied Villanova program set to turn the reins over to ex-Villanova assistant and Fordham head coach Kyle Neptune:

What will Jay Wright’s legacy be in college basketball? In the Big East? At Villanova?

The day after Villanova reached its latest Final Four, the most popular topic on sports radio in Philadelphia was unusually sensible: Is Jay Wright the greatest coach — any sport, any level — in the city’s history? With the shocking news of Wright’s retirement, the answer is equally sensible. If Jay isn’t the No. 1 answer, he’s on a very, very short list.

The legendary Philadelphia Big 5 has produced one Hall of Fame coach after another: Harry Litwack, Dr. Jack Ramsay, Tom Gola, Chuck Daly, Massimino, John Chaney. Many are giants in the city and beyond, but Wright surpassed them all as a college coach.

What do John Thompson, Jim Boeheim and Massimino have in common? They are Big East icons with multiple Final Four appearances and a national championship to their name. Wright bested each and added an Olympic gold medal for good measure.

One could argue it was Wright, not his mentor Massimino, who killed the Big 5 — simply by being too good. Or that it was Wright who saved the Big East when it was reborn a decade ago. In the first five years of the “new” Big East, all Villanova did was win two national championships, collect three No. 1 seeds and go well over five full seasons without losing two games in a row. Think about that.

College basketball has lost as good a coach and representative as there is in the country. But for all the suits and swooning fans, Jay Wright has been an incredible competitor and a first-class mind. That is where the winning was born and what an entire sport can never replace. — Lunardi

Jay Wright took a proud Villanova program and elevated it into the stratosphere. Photo by Tom Pennington/Getty Images

What do you consider to be Wright’s finest achievement at Villanova? What’s an underrated part of his college basketball legacy?

I believe his finest achievement was the 2017-18 national title run. I think we view the 2015-16 championship as a miraculous effort from a group that gave us one of the most memorable buzzer-beaters in the history of the NCAA tournament. Kris Jenkins won’t have to pay for another meal in Philly after that incredible moment secured the 2016 title. But 2018 was something else.

Before it had even reached the national tournament, Villanova had defeated elite Tennessee and Gonzaga squads. After Valentine’s Day, the team lost just one game (an overtime battle at Creighton) the rest of the way. In the NCAA tournament, the Wildcats beat every team by double digits, including a 17-point win over Michigan in the title game. That was one of the most dominant runs in recent NCAA tourney history. It also was a statement: Villanova had kicked in the door of the blue-blood country club with its second title in three years and made sure the Power 5 would be viewed as the “Power 6” with the Big East earning a spot.

The most underrated part of his legacy has been his ability to develop NBA talent. Once you get past the schools that have excelled in the one-and-done climate, there are not many programs with more players in recent years who’ve found spots in pro rotations than Wright’s. Kyle Lowry is a five-time All-Star who has played more NBA games than anyone in Villanova history. Saddiq Bey averaged 16.7 points per game with the Detroit Pistons this season. Jalen Brunson is a reliable point guard for the Dallas Mavericks. Mikal Bridges was a NBA Defensive Player of the Year finalist with the Phoenix Suns. Dante Cunningham bounced around the league for nearly a decade and made $20 million. Josh Hart just signed a three-year deal for $37 million. Those who went through Wright’s program not only had a chance to play at the next level, they were prepared to compete once they arrived. That’s a part of his legacy that deserves more recognition. — Medcalf

On April 4, 2016, North Carolina’s Marcus Paige hits a miracle 3 to tie the score but is outdone by Villanova’s Kris Jenkins, who hits a 3 to give the Wildcats the title.

Where does Wright’s retirement fall on the scale of all-time shocking college basketball retirements?

Wright’s retirement or career change or whatever this is ranks way up there in terms of shock value. In normal jobs, reaching the age of 60 means it’s time to start thinking about the next chapter. Then again, successful college basketball coaches aren’t in normal jobs. Wright, 60, is almost 17 years younger than Jim Boeheim, 13 years the junior of Leonard Hamilton and 12 years younger than Jim Larranaga. When you’ve reached Wright’s level, the standard operating procedure is to keep going through your 60s. Instead, he has apparently decided that two national titles will suffice.

You might have to go back almost a half-century to find anything comparable to what Wright has just done. Al McGuire stunned a good many people when he announced in December 1976 that he was planning to step down as Marquette head coach after the end of that season. At the time, McGuire was just 48. Still, even McGuire’s precedent doesn’t quite measure up to Wright’s departure. We know now that Marquette ended up winning the national title that season. McGuire certainly didn’t know that in advance, and in fact, his team came fairly close to not even making the 32-team NCAA tournament field. By contrast, Wright knows exactly what his legacy is and what his decision entails. This is a bombshell. –– Gasaway

Kyle Neptune received high marks for his work during his lone season as head coach at Fordham. Photo by John Jones/Icon Sportswire

Just 37 years old and with only one year of head-coaching experience under his belt, Neptune will be replacing a Hall of Famer. As with Jon Scheyer at Duke and Hubert Davis at North Carolina, it’s going to be a shock to see someone else on the sideline. But Neptune should understand the Villanova culture as well as anyone. He spent two seasons under Wright as a video coordinator, from 2008 to 2010, before going to work under Joe Mihalich at Niagara for three seasons. Neptune then returned to the Wildcats in 2013 as an assistant coach. He was in that position for eight years, winning two national championships and solidifying himself as the next in a long line of Wright assistants to get a head-coaching job.

Neptune earned that chance last spring, when he was named the head coach at Fordham. In his lone season with the Rams, he went 16-16 overall and 8-10 in the Atlantic 10. While those numbers don’t jump off the page, consider Fordham had won just two games in 2020-21 and hadn’t won eight A-10 games since 2015-16. — Borzello

Will the next phase be successful for Villanova? Who do the Wildcats have returning in 2022-23?

Villanova had five seniors on this season’s Final Four team: Collin Gillespie, Jermaine Samuels, Caleb Daniels, Brandon Slater and Dhamir Cosby-Roundtree. Of that group, only Gillespie and Samuels are officially out of eligibility after the NCAA granted every student-athlete a free year due to the pandemic-impacted 2020-21 season. Of the players certain to return, Justin Moore is atop the list — although the torn right Achilles tendon that he suffered in the Elite Eight will keep him out indefinitely. Fellow starter Eric Dixon also is back. And then there are a lot of question marks across the rest of the roster. Wright mostly used just six players throughout the key parts of the campaign, and only one (Dixon) is healthy and definitely set to come back. Bryan Antoine, Chris Arcidiacono and Jordan Longino played varying roles along the perimeter this past season, and the same goes for Trey Patterson and Nnanna Njoku in the frontcourt. But none of those five players averaged more than 1.8 points or played more than 10 minutes per game.