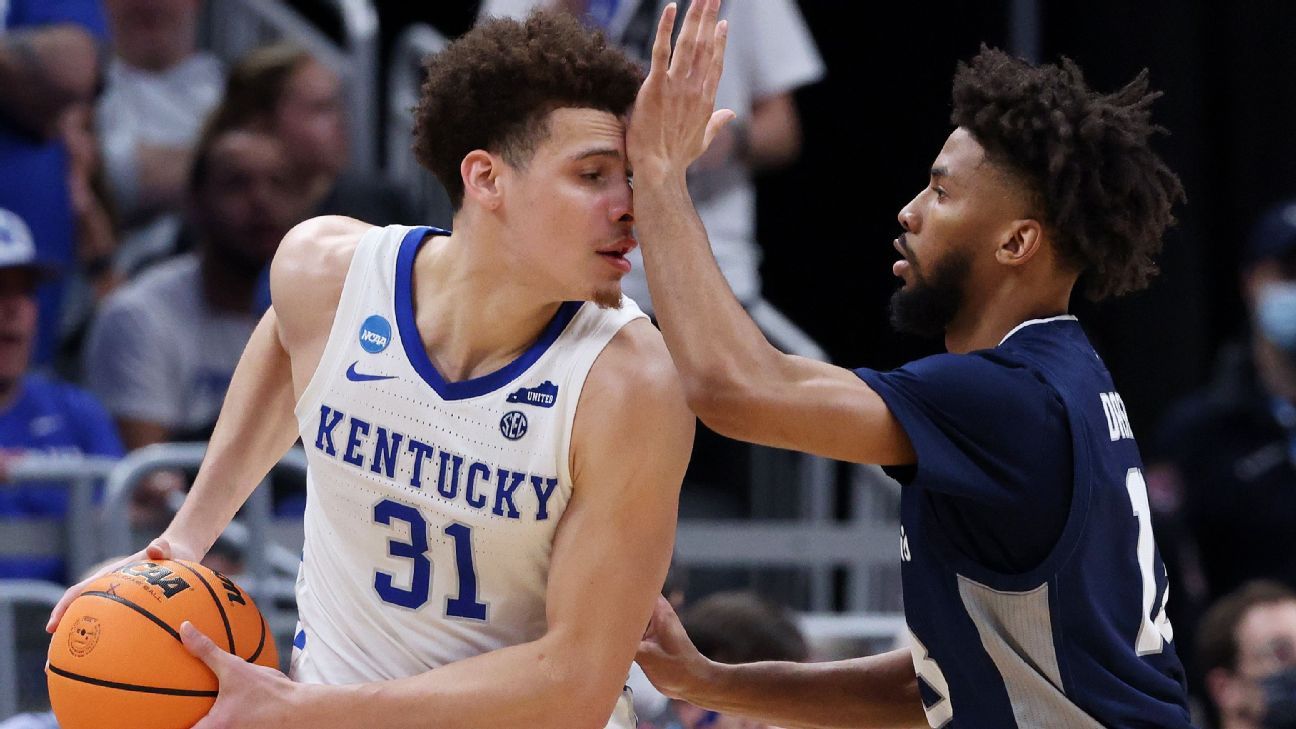 In the first truly shocking upset of March Madness 2022, a Kentucky Wildcats team that many bracket-fillers and national observers had pegged for a Final Four appearance (at a minimum) fell to the 15th-seeded Saint Peter’s Peacocks 85-79 in overtime on Thursday in Indianapolis.

Among ESPN’s 54-person panel, 37 had the Wildcats reaching the Final Four, with a selection of those picking Kentucky to win what would have been the program’s ninth national title. As it is, the 2022 NCAA tournament will be without one of its perennial blue bloods, throwing into greater question what is now perceived to be a wide-open East Region bracket and eliciting an offseason’s worth of major questions for head coach John Calipari and his program.

With the historic loss now in the books, ESPN’s team of Myron Medcalf, Jeff Borzello, John Gasaway and Joe Lunardi reflected on the reasons for and meaning of the Kentucky loss, projecting how far the Peacocks can go and what the Wildcats might look like in the 2022-23 college basketball season. Follow this link for NCAA tournament tip times, and visit here to check your March Madness bracket.

Saint Peter’s was not rattled by Kentucky, getting the Wildcats to overtime and then handling them in the extra session. Photo by Dylan Buell/Getty Images

What sunk Kentucky in its loss to Saint Peter’s?

The Wildcats lost the battle on the perimeter. Kentucky’s guards offered very little offensively throughout the game: TyTy Washington Jr. shot 2-for-10, Kellan Grady was 1-for-9 (although the one make nearly gave Kentucky the win in regulation) and the Peacocks’ decision to go zone at key times prevented Sahvir Wheeler from getting downhill and creating plays for himself and teammates. The offense too often turned to throwing the ball to Oscar Tshiebwe and hoping for the best — and while Tshiebwe was the best player in the country this season, he’s not at his best trying to create his own offense in the low post. As a team, Kentucky shot 4-for-15 from 3. Meanwhile, Saint Peter’s made nine 3-pointers and shot 53% from behind the arc. Doug Edert and Daryl Banks III played with a ton of confidence and were able to get shots off against Kentucky’s defense.

Even with all that, Kentucky had plenty of chances to win, but the nail in the coffin was free-throw shooting in overtime. The Wildcats shot 1-for-6 from the stripe in the extra period, failing to extend their lead after getting out to a four-point edge in the opening minutes. On the flip side, Saint Peter’s made 18 of its 21 free-throw attempts — making nine in overtime. — Jeff Borzello

What are the historical implications of Kentucky’s loss? Where does this rank on the list of disappointments for Wildcats fans?

This tops the list in terms of shocking upsets. John Calipari was previously perfect in the round of 64 as Kentucky head coach. The Wildcats did lose early in 2004 as a No. 1 seed, but that was to UAB in the round of 32. The Christian Laettner shot that propelled Duke over UK in the 1992 Elite Eight is legendary, but losing to a No. 1 seed like the Blue Devils isn’t quite the same as falling to No. 15 seed Saint Peter’s. Kentucky fans have their tales of heartbreak, of course, but the Wildcats have customarily performed well in relation to their seed in the Calipari era. Losing to the Peacocks has to rank very near the top for disappointing surprises in UK’s NCAA tournament history. — John Gasaway

What does this mean for the East Region? Who’s the favorite now?

Geez. I never thought we’d even have to consider this after the first round. But I’d say Baylor, with a full acknowledgement that Purdue and UCLA probably feel confident about their respective chances to emerge from the region and reach the Final Four. I also think the sleepers in this region are far more interesting now. Murray State and Saint Mary’s can’t be counted out in that conversation.

Complete your bracket by selecting the winner in each of the games in the NCAA tournament from the Sweet 16 to the championship. Tournament Challenge Second Chance

Kentucky was unique. It had the most dominant force in the sport with Tshiebwe, the likely Wooden Award winner, in the paint. At its best, Kentucky was an offensive-rebounding monster that could turn those second chances into key opportunities for the SEC’s most efficient offense. I think the rest of the region is full of flawed teams, so Baylor’s shot at making a return trip to the Final Four — the Bears registered 139 points per 100 possessions in Thursday’s win over Norfolk State — have just increased. By a lot, I think. — Myron Medcalf

What is the ceiling for Saint Peter’s? Can the Peacocks win another game?

First they need an opponent, a certain mid-major emerging from the Murray State-San Francisco portion of the East bracket. But that’s tomorrow’s story. [Editor’s note: Murray State defeated San Francisco in overtime.] Today is about Saint Peter’s, now looking to become just the third No. 15 to ever reach the Sweet 16.

Why not? Are the Peacocks any more of an underdog than Oral Roberts? ORU turned the same trick way back in… last year! And the Golden Eagles had to defeat surging Florida in the second round. The Peacocks won’t be facing a team that overwhelms them physically, and they certainly won’t be afraid after going toe-to-toe with a much stronger 2-seed than ORU did with Ohio State (not to mention all of Big Blue Nation!).

I’d give Saint Peter’s at least one chance in four to advance. — Joe Lunardi

Who does Kentucky have coming back? What will the Wildcats look like next year?

With the portal and the extra year of eligibility due to COVID, it’s almost impossible to tell what teams are going to look like in a month, let alone seven months. But Washington is a likely lottery pick and Tshiebwe will get drafted if he leaves this season, so let’s assume both leave. Davion Mintz and Grady are seniors, so they’re gone, too. The big question is Shaedon Sharpe, arguably the No. 1 prospect in the 2022 class who graduated early and enrolled in Lexington for the second semester. He would be a top-10 pick if he ultimately departed, but he seems legitimately up in the air. A possible projected lineup, without Sharpe, would include returning starters Wheeler, Keion Brooks Jr., five-star recruits Cason Wallace and Chris Livingston — along with Jacob Toppin or returning five-star prospect Daimion Collins. More likely, Calipari will go back into the transfer portal and find at least two or three players to reload and make another run. — Borzello