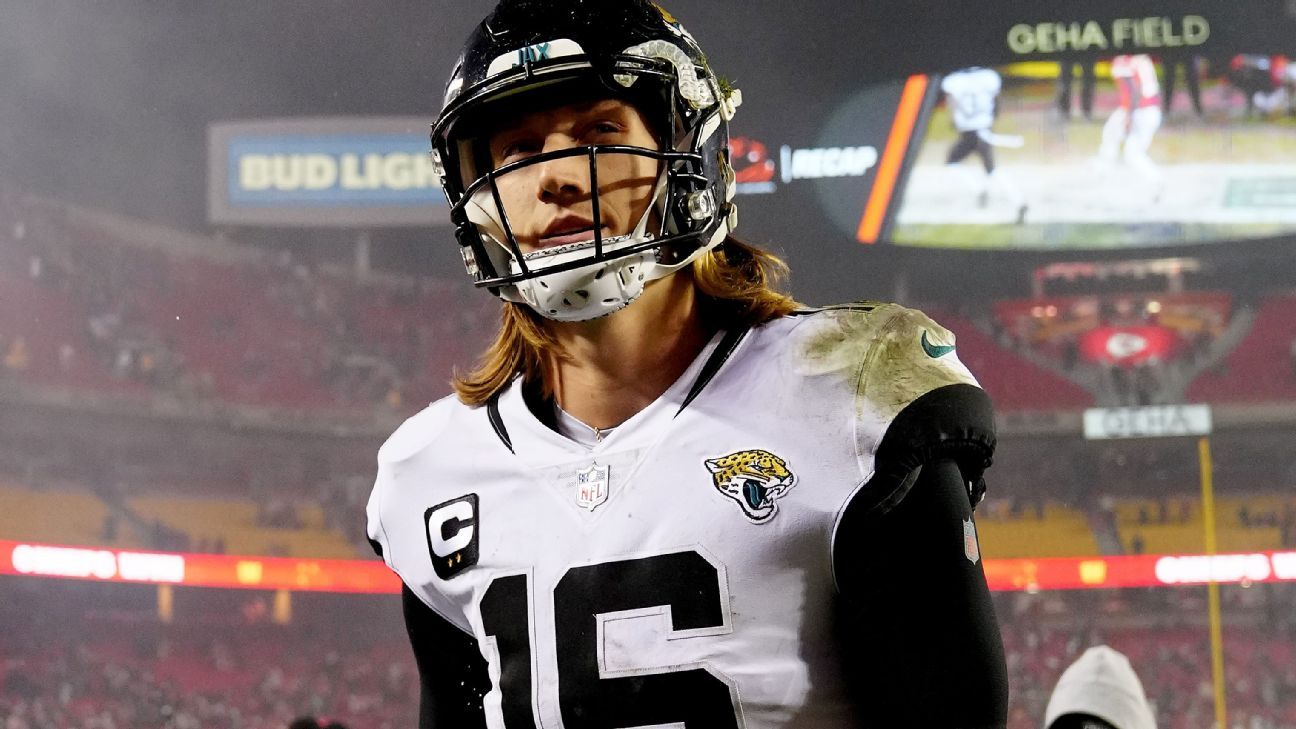 KANSAS CITY, Mo. — The Jacksonville Jaguars’ AFC South title and berth in the divisional round of the playoffs certainly were among the most unexpected developments of the NFL season.

Coach Doug Pederson and quarterback Trevor Lawrence agree that shouldn’t be the case any longer.

Winning division titles and competing for a spot in the conference championship game and Super Bowl should be the baseline, they say, for the franchise going forward.

“We worked so hard to get here, and nobody thought we were going to be here, and we had our shot — and that’s what hurts,” Lawrence said Saturday night after the 27-20 loss to the Kansas City Chiefs at Arrowhead Stadium. “We’ll be back. I’m confident in that. This is more the beginning than it is the end of something.

“This is just getting started for us. We got a taste of it, and guys are already hungry to get this opportunity again.”

You can’t blame anyone for not believing the Jaguars would be a postseason team when the campaign started: They had just landed the No. 1 overall pick in back-to-back drafts; they had won four games combined in 2020 and 2021; and they were still trying to recover from head coach Urban Meyer’s dysfunctional 11-month tenure.

It looked like the Jaguars were headed for their 11th season of double-digit losses in the past 12 after they dropped to 3-7 when the Chiefs beat them on Nov. 13 in Kansas City. Instead, Jacksonville won five of its next six games to set up a winner-take-all game with the Tennessee Titans in Week 18. The Jaguars won that game in Jacksonville 20-16 to earn just the second AFC South title in franchise history and make the playoffs for the first time since 2017.

After committing five turnovers — including four interceptions by Lawrence — and falling behind 27-0 in the first half of a wild-card playoff game last weekend, the Jaguars rallied for a 31-30 victory over the Los Angeles Chargers at TIAA Bank Field. That set up Saturday’s rematch with the Chiefs.

The Jaguars couldn’t stop Chiefs tight end Travis Kelce (14 catches for 98 yards and two touchdowns), committed two turnovers (including one in the red zone) and were unable to pressure an injured Patrick Mahomes in the second half. An up-and-down campaign that included a five-game skid in October and a five-game winning streak to close out the regular season ended one game shy of the AFC title game.

There are definitely more ups ahead, Pederson said, and that’s mainly because the Jaguars finally have the thing that has eluded them for more than two decades: a franchise quarterback.

“I think it’s everything,” Pederson said. “I’ve said this before that the success of your football team lies with your quarterback and you’ve got to get that piece and that player right, and I feel that Jacksonville got that person right. And he’s just going to get better.”

Lawrence finished his second season with 4,113 passing yards, 25 touchdowns and eight interceptions. He completed 66.3% of his passes, and his 95.2 passer rating ranked 10th in the NFL. The Jaguars’ offense ranked 10th in yards per game and 11th in scoring in the first year of Pederson’s system. Pederson and Lawrence expect the offense to be even better in their second season together — and with the addition of wide receiver Calvin Ridley, for whom the Jaguars traded in November.

There still are issues with the roster — the pass rush has to improve, and cornerback is arguably the top need — but the Jaguars are in the best shape of any AFC South team because of Pederson and Lawrence.

That’s why they believe the Jaguars will be playing deep into January (and, they hope, February) for the foreseeable future.

“We’re all hurting because of the loss, but we’re all hurting too because this is the final game of this year, and that’s the hard thing,” Pederson said. “But like I told the guys, these are the games we’re going to learn from and we’re going to be better because of. I told them, ‘Just plan on every year of us being in these meaningful games at the end of the season.’ We want to be one of the four, five, six teams in the AFC every year.”

Lawrence said it might take a while for him to get over the loss but that the 2022 season will be what’s talked about as the turning point for the franchise.

“I think this year obviously was huge for this organization, for our city, for just our franchise moving forward,” he said. “That kind of sets the bar of who we’re going to be and what we’re going to do moving forward, and that’s the mindset, and we won’t settle for less than that. We got a taste of it being here, but there’s more left, and we all feel that.

“It’s going to make us better. This won’t be the last you guys hear of us. We’ll be back.”

Next post Jinger Duggar Vuolo: I was ‘terrified’ of outside world, raised in ‘cult-like’ religion