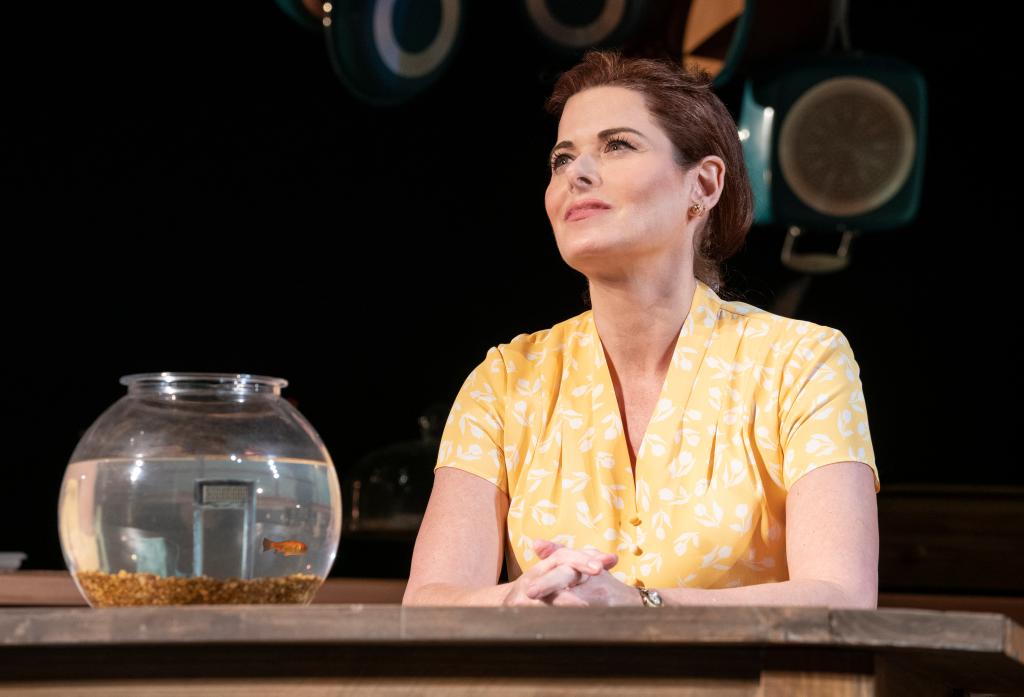 There are flickers of beauty in the new play “Birthday Candles,” which opened Sunday night on Broadway.

Noah Haidle’s warm-but-flawed dramedy, with great feeling and occasional poignancy, takes us through 90 years of an average Michigan woman’s life.

Of course, when you condense nine decades into an hour and a half, both bliss and tragedy arrive faster than spam emails on a Monday. The name of Ernestine’s hometown, Grand Rapids, describes her rocky, unpredictable road well.

After every victory for Ernestine (Debra Messing) — an invitation to prom, the birth of a child, the starting of a new business — a crushing blow soon follows. Deaths, cheating and health scares are all weathered with Midwestern steeliness that hides immense pain.

What really packs a punch, though, are her smaller losses. During one scene, we race through a series of her birthday celebrations in her eighties and nineties over a matter of seconds. The parties start out big and boisterous, and by the end of the sequence, no one is visiting her house anymore. That all too truthful observation about aging makes you want to run out and call grandma. 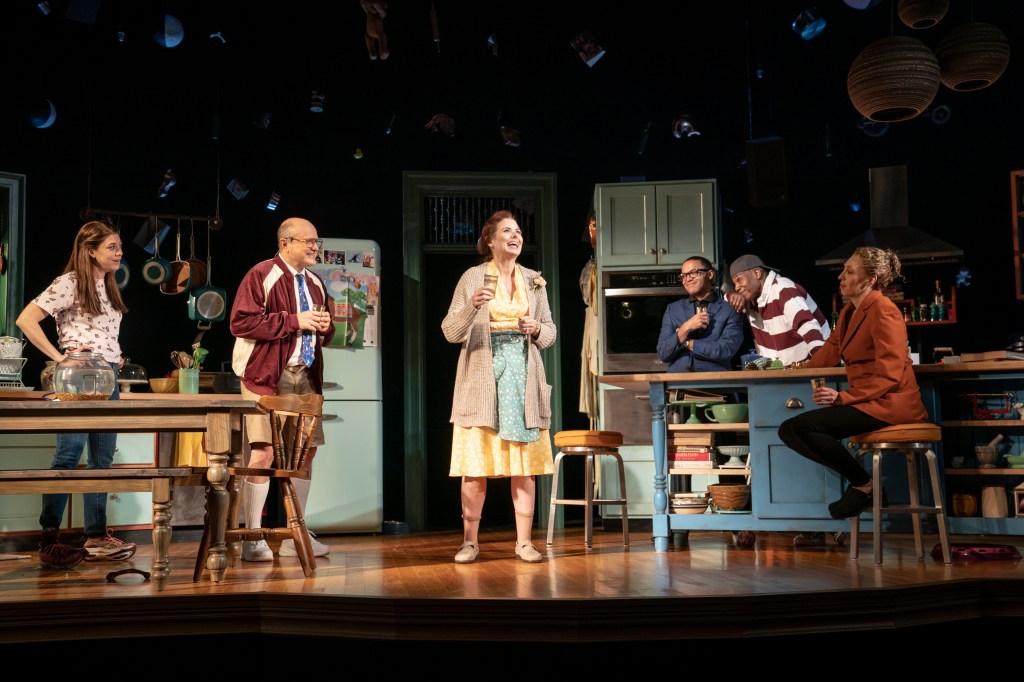 The play begins when Ernestine is 17, and is learning how to make a birthday cake with her mother — a tradition she will repeat every single year. These first several minutes are cloying. The actress overdoes it playing a teen, and Haidle writes partly in metaphysical mumbo-jumbo that can be hit-and-miss.

For instance, her second line is, “In the career of my soul, how many times have I turned from wonder?” That’s a bit heady for a show’s first 30 seconds.

But “Birthday Candles,” which is set in one kitchen, shakes off the pretentiousness when Ernestine enters middle age and has children of her own. The actors who play rebellious Madeline and Billy, Susannah Flood and Christopher Livingston, storm in with tremendous humor and energy and cut through the weird, stuffy, “Philadelphia Story” act Messing is doing.

Impressively getting more laughs than the “Will and Grace” star is the hilarious Crystal Finn as Joan, Billy’s neurotic college girlfriend and later wife. When she chastises herself in the third person — “You ruin everything, Joan! They’re all laughing at you!” — she morphs into everybody’s strange in-law. Finn, making her Broadway debut, is a talent to watch. 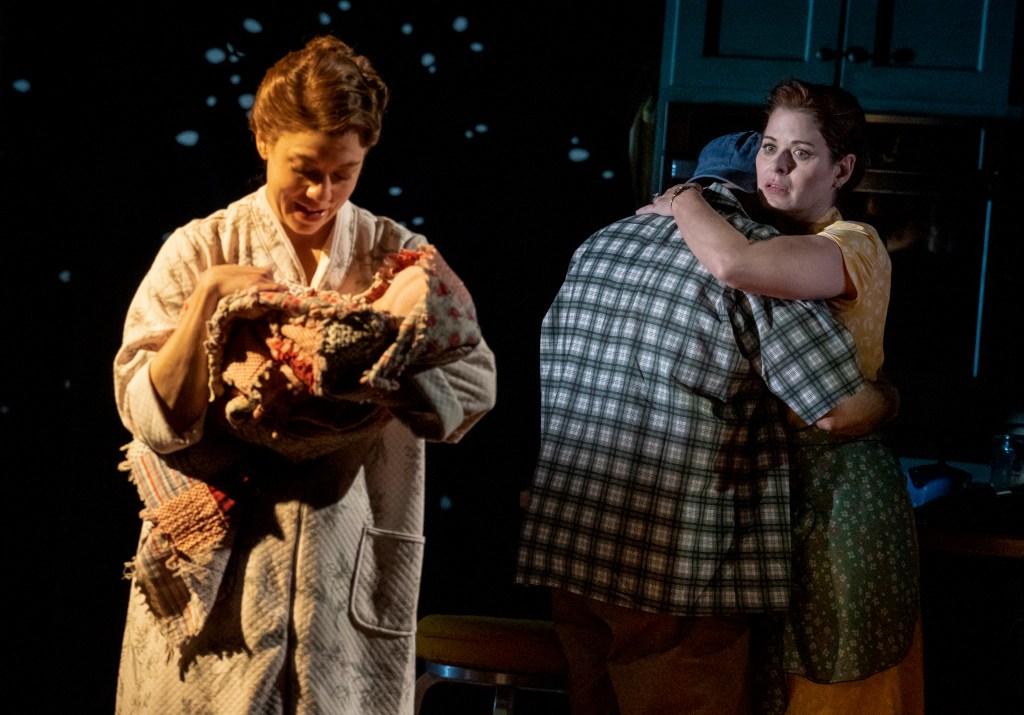 Every actor here other than Messing and Enrico Colantoni, who plays a boy who pines for Ernestine named Kenneth, deftly takes on multiple roles (John Earl Jelks plays her husband, Matt, among others). They click like a real family.

Messing, meanwhile, doesn’t quite rise to the occasion of her one very challenging part. She crosses the finish line on likability alone, yet you can’t help but think that Ernestine is a meatier role than Messing has made it. Her youthful and elderly characterizations are too sit-com silly and the transition between ages — which should be a stellar acting showcase — is abrupt and stilted. Moments that are merely sad in director Vivienne Benesch’s production could be devastating.

And Haidle has his writerly indulgences, too. A goldfish named Atman (“the Sanskrit word for self”) sits on the kitchen table for most of the play to lend some continuity, but it comes across as gimmick. And — look out, Julia Child! — Messing bakes an actual cake onstage. Fun, sure, but it’s awfully tough to smell nostalgic homemade dessert when you’re wearing a medical-grade mask.

Nonetheless, Haidle’s plays (his better “Smokefall” did not receive the production it deserved when it played New York back in 2016) have a way of convincing every audience member they’ve been written just for them. “Birthday Candles,” at its best, bubbles up our own cherished and difficult memories of the people in our lives who’ve come and gone.

Previous post The art of smell: Research suggests the brain processes smell both like a painting and a symphony

Next post Everything you missed from MLB Opening Day: Walk-off wins, sentimental