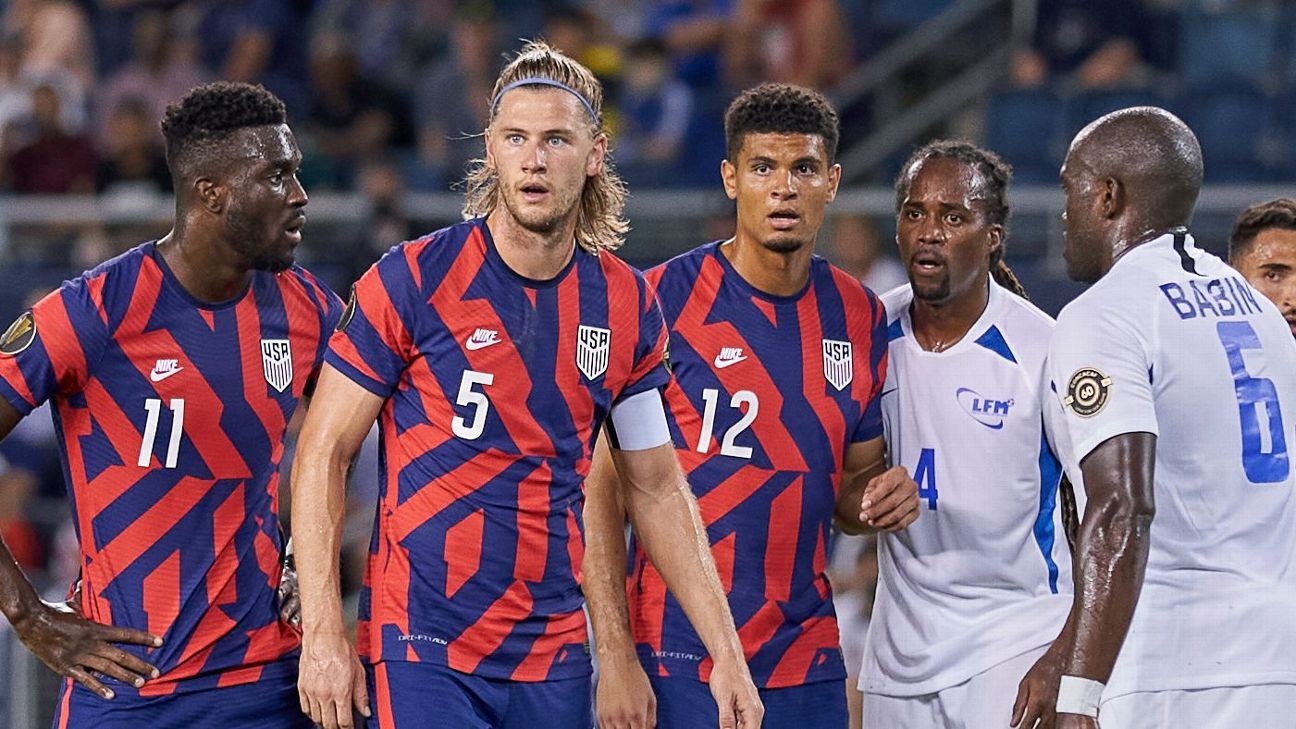 In its past three World Cup appearances, the United States men’s national team had an average of 4.3 players per squad with Champions League experience. Making up the numbers in those teams were Jonathan Spector and Julian Green, who had combined for a total of 23 minutes in the competition at the time of their inclusion in the U.S. squad.

In the most recent international window, you could count seven players boasting minutes on European football’s grandest stage, and that was without Juventus midfielder Weston McKennie, Barcelona right-back Sergino Dest and FC Salzburg attacker Brenden Aaronson. There may not be consensus on U.S. manager Gregg Berhalter’s best XI just yet, but it’s not unreasonable to assume that nine of the 11 players on the pitch in the Americans’ opening match at Qatar 2022 will be Europe-based.

The two exceptions? That would be at center back, where Nashville SC captain Walker Zimmerman and Atlanta United prodigy Miles Robinson have established themselves as the player pool’s premier defenders, with the New York Red Bulls’ Aaron Long seeming best positioned to dislodge one of them.

With American players increasingly heading overseas and at younger ages, how have three players aged 25, 28 and 29, based in Major League Soccer, sewn up the first three places in the center-back depth chart ahead of VfL Wolfsburg veteran John Brooks or the promising Chris Richards of TSG Hoffenheim, who is on loan from Bayern Munich?

“Major League Soccer is open to giving young players the opportunity to be on the field,” Berhalter told ESPN. “Any time you get young players on the field, there’s a huge developmental curve, and you’re seeing that with a lot of our younger players.”

Since his age-23 year, Zimmerman has averaged 2,130 minutes of league play per season. Robinson has played an average of 2,131 league minutes in the past three years, when he was aged 22, 23 and 24. Long has accumulated an average of 1,818 minutes a year since his age-24 season in 2017, despite playing just five times in 2021 after suffering a torn Achilles in May. Take that lost season out of the equation and his average climbs to 2,227 MLS minutes per year.

That opportunity for consistency is not a given for players who cross the Atlantic. Mark McKenzie left the Philadelphia Union in January 2021 as a highly touted 21-year-old center-back prospect. In the nearly season-and-a-half since joining Genk, he has accumulated 1,729 Belgian Pro League minutes — although it should be noted that these would be considered his age-21 and age-22 seasons.

“That’s the risky part. It’s not, ‘Are they good enough?’ It’s, ‘Do they land in the right spot that sets them up for success?'”

But there’s more than just opportunity that explains the growth Zimmerman, Robinson and Long have achieved within MLS. Being selected ahead of international teammates earning minutes in LaLiga and the Bundesliga, this trio has not just grown in America; they have thrived.

“Miles, Walker and Aaron,” Berhalter said, “they’re getting to play against some very good players, and that’s really helping their game develop.”

Of the 65 designated players listed before the 2022 season began, just nine played in non-attacking positions. Say what you will about the level of the league and its salary structure, it has placed great emphasis on recruiting impactful attacking talents, and its defenders are better for it.

Major League Soccer is here! Coverage of all 28 teams with live games, replays, highlights.
Sign up now to stream soccer on ESPN+

Battle-tested and with a World Cup looming at the end of the year, providing the biggest stage there is to showcase one’s talents, could Zimmerman, Robinson and Long join their colleagues overseas come 2023? For Zimmerman and Long, at 28 and 29, respectively, that ship may have sailed.

“I was at that moment … where it’s now or never,” Parkhurst said. “I think I was 24 or 25, and I was about to sign another four-year deal [in MLS], so at that point it’s like, ‘I’m gonna be too old [to go to Europe].’ So there’s definitely a time limit where you’re not attractive anymore and the opportunity’s not there.”

Recently turned 25 and reportedly with one year remaining on his contract after the 2022 season, Robinson now has a decision to make. Does he remain in Atlanta, following in the footsteps of his USMNT defensive partners and MLS lifers, or does he try his luck in Europe?

“I really think that Miles could play in any league in the world,” Parkhurst said. “I don’t think that he’s the final product, there’s little things that he needs to work on and improve on, but I’ve never played with anyone that’s a better defender, I’ve never seen a better one-on-one defender.

“Usually it’s the physical tools that would prevent you from playing in certain leagues, but these guys are three of the most athletic defenders I’ve ever seen.”

Previous post CRISPR and HIV: New technique in human blood unveils potential paths toward cure: Key to possible HIV cure may lie in mechanisms behind how it replicates

Next post I just spent $14,000 on virtual land inside the metaverse