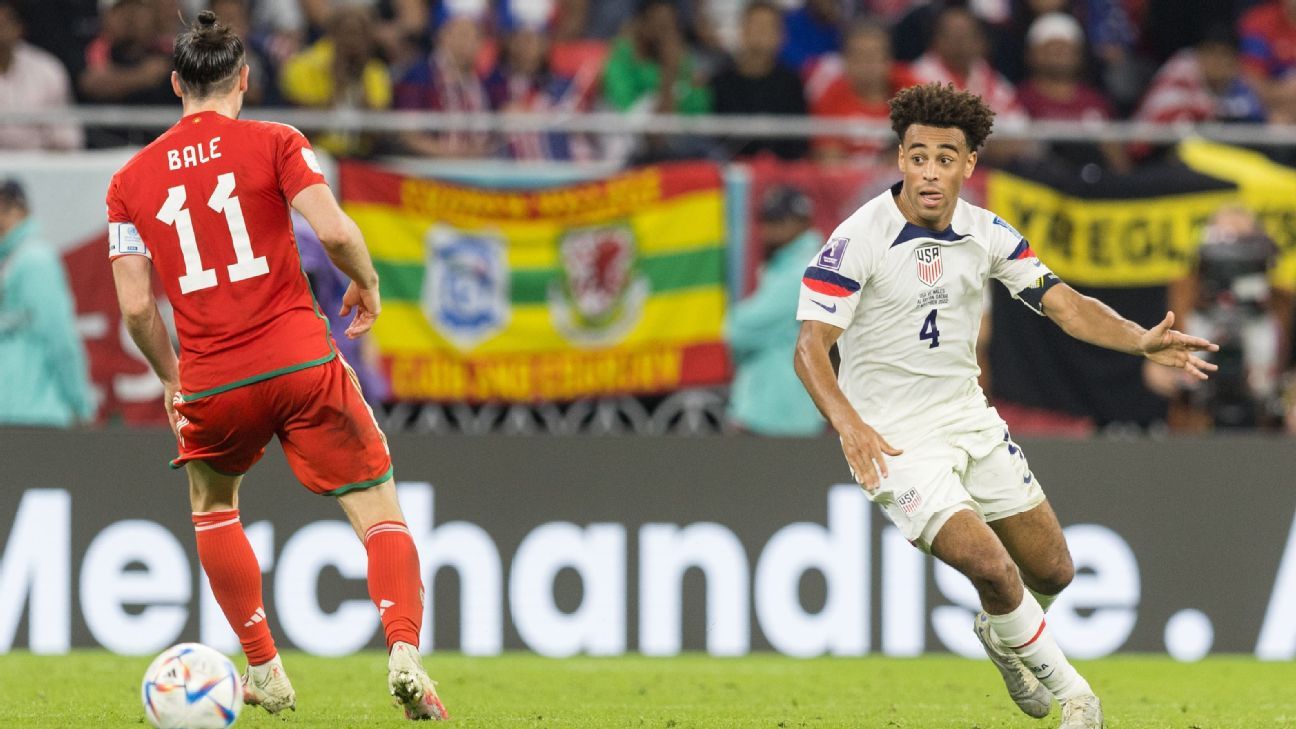 The World Cup’s first multi-game day was a doozy from start to finish. England handled business against Iran, Netherlands pulled away late against Senegal and the United States settled for a hard-fought draw with Wales.

The action doesn’t stop there — the Tuesday matches will see global superstar Lionel Messi start his quest to lead Argentina to a coveted third title, and Mexico looking to stifle Robert Lewandowski and an intriguing Poland side.

Be sure to check in with ESPN throughout the tournament as we bring the latest from Qatar. Here’s what you may have missed from the Monday World Cup happenings.

The United States were minutes from holding to a win over Wales, but a late penalty by Gareth Bale ensured the game finished thrilling 1-1 draw (yes, they exist) Monday in the Group B clash.

Tim Weah, who scored the United States’ goal in the first half, was dynamic both on the attack and on defense. Just when it looked like the US might survive, Wales was handed a lifeline when Walker Zimmerman’s clumsy challenge on Bale was rightly whistled as a penalty. Bale slammed home the ensuing spot kick, giving Wales a priceless point, one that looked unlikely for much of the evening.

As ESPN’s Jeff Carlisle writes, the 1-1 draw is a result that will stick in the US team’s craw. The squad was minutes away from claiming all three points and being in a position in which it could control its own destiny in Group B ahead of a big game against England.

Gareth Bale and Tyler Adams have impressive performances in the World Cup draw between Wales and the United States. Foto Olimpik/NurPhoto via Getty Images

Speaking of the Three Lions, they kicked off their 2022 World Cup campaign in style as they beat Iran in a 6-2 thrashing thanks to a brace from Bukayo Saka and efforts from Jude Bellingham, Raheem Sterling, Marcus Rashford and Jack Grealish.

Take your pick of who impressed the most for Gareth Southgate’s squad but according to ESPN’s James Olley, it was Bellingham who stood out. At just 19 years old, Bellingham has been able to add dynamism and ingenuity in an area of the pitch England have lacked for years. He still has a ways to go in terms of developing but this was a hugely promising start — and no doubt caught the eye of the top clubs eyeing a move for the Borussia Dortmund star, including Liverpool, Manchester City and Real Madrid.

And while the England players were making a football statement, the Iranian squad made a political one when the starters decided not to sing the country’s national anthem prior to kickoff in a perceived show of support for protesters in Iran. Amid boos from the fans in the stands, Iran coach Carlos Queiroz said after the game that fans should “stay at home” if they cannot support the players’ decision.

Gab Marcotti says England can only take positives after an impressive attacking display in their 6-2 win vs. Iran.

The best bits from today

Eriksen’s ready to let his play, and Denmark’s do the talking
The return to action of Christian Eriksen was one of the best soccer stories of the year following his cardiac arrest during the European Championships on June 21, 2021. Yet he’s done looking back.

Why did FIFA ban the LGBTQ OneLove armband at the World Cup?
Another high-profile FIFA policy reversal has overshadowed the action at the World Cup. Why were captains like Harry Kane forced to wear a different armband?

– Group C: Argentina vs. Saudi Arabia (Lusail Stadium, Lusail; 5 a.m. ET)
Lionel Messi & Co. have had little turbulence coming into this World Cup than they have in most during the GOAT’s career, but are they really saving their best for what could be Messi’s last major tournament for his country? They certainly look like a complete side from end to end…

– Group D: Denmark vs. Tunisia (Education City Stadium, Al Rayyan; 8 a.m. ET)
The return of Christian Eriksen to the world stage is the big story, but the Danes — who reached the Euro 2020 semifinals after that shocking moment — have work to do here against a Tunisia team that nobody is taking for an easy three points. We’d still pick Denmark to get a result, but the World Cup is unpredictable at the best of times.

– Group C: Mexico vs. Poland (Stadium 974, Doha; 11 a.m. ET)
It’s fair to say El Tri have not had the smoothest run-up to this World Cup, with a string of poor performances in CONCACAF and a worrying lack of goal scoring power given Raul Jimenez’s injury issues and the fact that both Carlos Vela and Javier “Chicharito” Hernandez are no longer in the national team picture. Meanwhile, Poland will be hoping for the best from one of the world’s best strikers, Robert Lewandowski, to get off to a hot start. This one’s a toss-up.

– Group D: France vs. Australia (Al Janoub Stadium; 2 p.m. ET)
Les Bleus are the defending World Cup champions, but their tournament prep has been a nightmare in terms of fitness, with Paul Pogba, N’Golo Kante, Presnel Kimpembe, Christopher Nkunku and Karim Benzema all forced to miss out due to injuries. That’s almost half of their first-choice XI! Lucky for them, their depth is unrivaled at this level and they’ve still got the all-world Kylian Mbappe in attack. Can he rise to the challenge?

What else caught our eye

Grealish busted a move after scoring in order to keep a promise to Finlay, a young Manchester City supporter with cerebral palsy who wrote a heartwarming letter to the forward earlier this season. Finlay had written to Grealish after learning that the player’s sister, Hollie, also has cerebral palsy.

For you Finlay ️ pic.twitter.com/BomJEA0oy6

Posting on social media after the game, Grealish made a point of dedicating both his goal and his celebration to Finlay.

If you’re looking to bet on the World Cup, ESPN contributors Paul Carr, Dan Thomas and Dalen Cuff are here to give you key tips on odds, options and futures.

Here’s what we have for the Tuesday matches.

Paul Carr: I don’t know how Saudi Arabia keeps this close. Argentina has what is probably their best overall team in the Lionel Messi era, and Saudi Arabia … do not. La Albiceleste allowed a total of eight goals in 17 qualifiers, and they will likely have Tottenham’s Cristian Romero back to bolster the back line. With Messi and Lautaro Martinez (eight goals for Inter this season) and a solid midfield behind them, Argentina shouldn’t have trouble scoring. And remember, the first group tiebreaker is goal difference, so Argentina are incentivized to pile up the goals to simplify the qualification process. Give me Argentina -2.5 (+140).

Dan Thomas: Argentina are rightly one of the favorites to win the whole thing and it’s a great way for them to start. Angel Di Maria has upset Juventus fans for not playing much since his move to PSG. I think he offers great value as anytime goal scorer +225.

Dalen Cuff: It’s hard to find value here but I do like both plays above. I’d also add Julian Alvarez anytime goal scorer (+120) to the mix.

Carr: This is the group game I most want no part of — a perennial underachiever (Poland) versus a team that’s a mess off the field (Mexico). I don’t trust either attack to generate chances, so I suppose I’d lean under, but the price on under 2.5 isn’t appealing at -185.

Thomas: Draw seems like the bet here. As Paul says, it’s tough to trust either of these sides to defy the critics and put in an impressive run over the next few weeks.

Cuff: This is a massive opener for two teams that are not in good form. Poland always struggles to provide enough service to Robert Lewandowski at major tournaments to let him shine. I think it’s more of the same here in a low-scoring affair and slight lean to Mexico. Draw no bet Mexico -120.

Carr: I picked Denmark to win this group, so I’m obviously high on the Danes. Tunisia was extremely unimpressive in qualifying, winning only three home games plus an away match versus troubled Zambia in the group stage, before squeaking out a 1-0 aggregate playoff win over Mali on an own goal. Without a standout center forward, Denmark is good, but not a goal-scoring machine. I’ll take under 2.5 (-140), and I don’t mind parlaying that with a Denmark win if possible.

Thomas: There is a lot of buzz — and rightly so — about Denmark being dark horses in this game. They’ll win this game. I like Jesper Lindstrom as an anytime goal scorer +225.

Cuff: I am also on Denmark to win Group D and get to the quarterfinals. I think they dominate the ball — and the game — limiting Tunisia from creating any real threats. I’ll take the Danes to Win to Nil +112.

Carr: Even with France’s long list of injuries, they’re still far better than Australia, who have only two players in Europe’s top five leagues. I’ll go with the bold “take the better team” theory here. With Karim Benzema out, you can get a decent price on France -1.5 (-125), and that’s the way I lean.

Thomas: I like France to win this game, but not by a big margin. Let’s go with Ousmane Dembele as the first goal scorer (+550).

Cuff: I think this could be tighter, with the Socceroos packing it in and trying to frustrate a banged-up France squad. I’m not playing this game, but I’d lean toward under 2.5 goals +105.