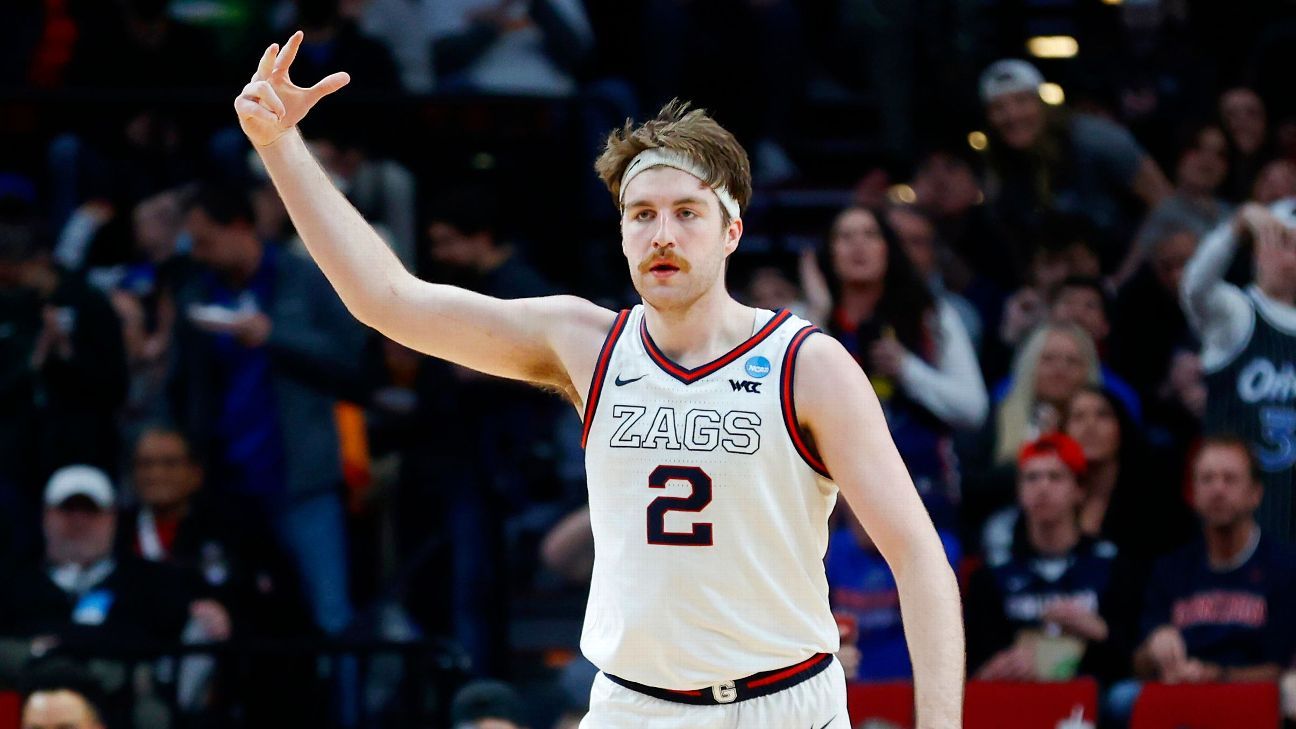 PORTLAND, Oregon — After a first half in which the top-seeded Gonzaga Bulldogs fell behind the No. 9 seed Memphis Tigers 41-31 Saturday in an NCAA tournament men’s basketball second-round matchup, leading scorer Drew Timme took it upon himself to set the tone for a second-half comeback.

First, Timme delivered a motivational message in the hallway before his team returned to the court, one he cleaned up in a postgame interview with CBS reporter Andy Katz and summarized as “I don’t give a flying F what happens at the end of the game, whether we lose or win, we’re not going out as no … soft guys.”

Then Timme followed up his words with production as Gonzaga rallied for an 82-78 win, advancing to the Sweet 16 for the seventh consecutive NCAA tournament — a streak that is one of the four longest in tournament history, joined by two from Duke under Mike Krzyzewski (nine and seven, respectively) and a record 13 consecutive Sweet 16s for North Carolina from 1981 to 1993 with coach Dean Smith.

After Memphis opened the second half with a bucket to extend the lead to 12, Timme scored the game’s next seven points. Overall, he scored 14 of the Zags’ 16 points in a stretch when they cut the deficit to two, making a 3-pointer and hitting from a variety of difficult angles.

“It seemed like he got every offensive rebound, every foul, every bucket for them consecutively,” Tigers coach Penny Hardaway said. “We’ve witnessed it from the TV a bunch, just watching him be that dominant, and to see it in person … he made some fantastic shots. Great defense and he still made them. That’s why he is who he is.”

For his part, Timme would prefer not to need second-half heroics.

“I think sometimes he likes to feel his way into these games,” Gonzaga coach Mark Few said.

It was a second consecutive slow start for the Zags in Portland. Facing No. 16 seed Georgia State in Thursday’s opening-round game, the Bulldogs led by just two at halftime before turning the game into a rout with a 21-0 second-half run. Timme had a team-high 10 points in the first half of that game but shot 3-of-7 from the field and missed 5 of his 9 free throw attempts.

On Saturday, Timme was even quieter in the first half, scoring just four points on 1-of-3 shooting and 2-of-4 on free throws. Facing a talented Memphis team that had won 13 of its previous 15 games after a 9-8 start, Gonzaga didn’t have the same kind of margin for error this time.

Although the Zags were 0-3 so far this season when trailing at halftime, Few didn’t deliver a fiery halftime speech.

“I don’t think I was screaming and yelling,” Few said, “but I was somewhat mildly agitated that we were playing ‘soft,’ so that wasn’t an original thought by Drew.”

“It was reiterated,” chimed in Timme.

After all, Few had reason for confidence. Gonzaga faced a variety of obstacles during last year’s undefeated run up through the national championship game, where the team was finally defeated by the Baylor Bears.

“These guys are battle tested,” Few said, referring to upperclassmen Timme and guard Andrew Nembhard. “These two have been through everything.”

On the opposing sideline, Hardaway recognized what happened to his team in the second half.

“They went to the championship level,” he said. “We were the more aggressive team in the first half. We kind of shocked them, took their confidence. I knew coming out after halftime that they were going to make an adjustment because they’re a great team and they did. They had to make shots and they had to get stops and they did both ways.”

Despite the Timme-led surge, the Tigers still stayed in the game until the closing seconds. A 3-pointer by Lester Quinones pulled Memphis within two at 78-76, and two free throws from Landers Nolley II again produced a two-point game with a little over six seconds remaining.

Both times, Nembhard made a pair of free throws, preventing the Tigers from ever having an opportunity to tie the score or take the lead — no guarantee on a night when the Zags shot 13-of-24 (52%) from the foul line, following up a 16-of-30 (53%) performance on Thursday.

“For him to step up and hit those free throws when literally everybody else on our team was smoking them was probably the most impressive thing of the night if you ask me,” Few said.

From the other side, Hardaway was certainly impressed by Timme.

“We understand that we were the underdog and we were going to have to fight these guys and went into halftime up 10 and got it to 12 and then the Drew Timme effect came into play,” Hardaway said. “He made some tough shots, controlled the game, got our guys in foul trouble and the rest is history.”