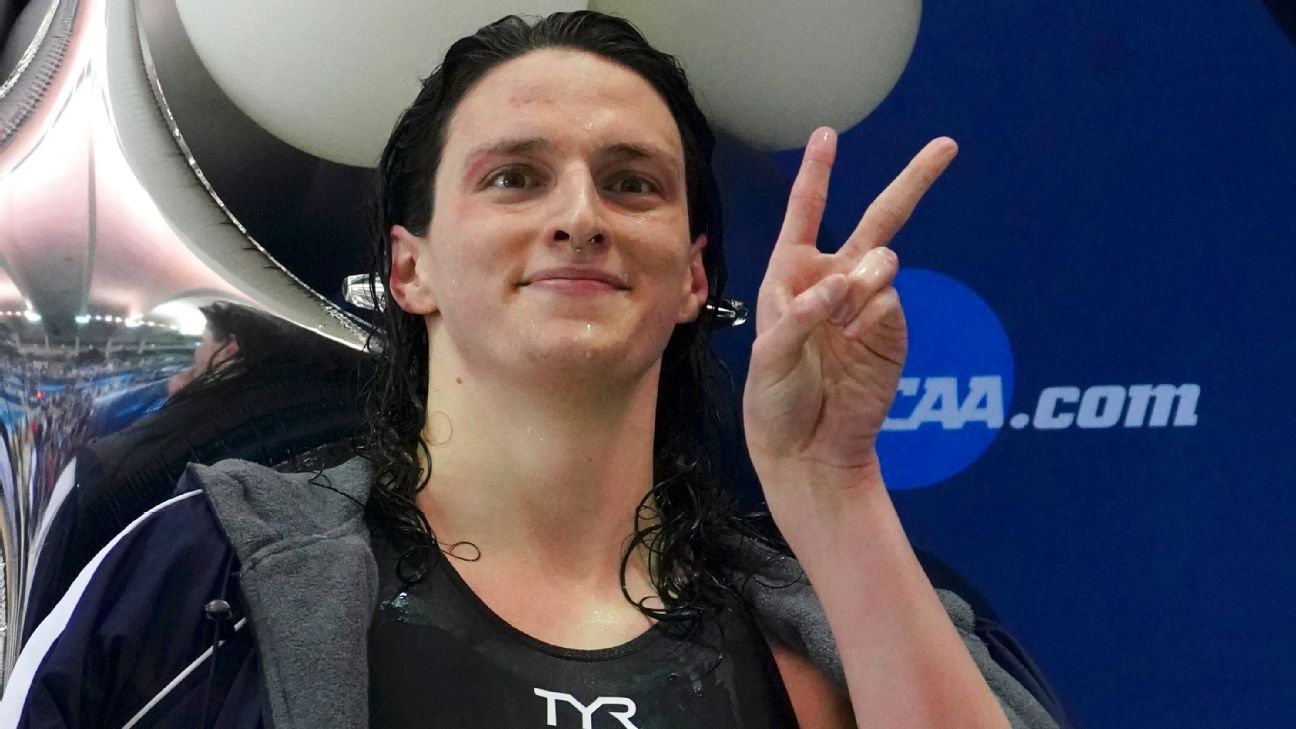 Thomas, who is a transgender woman, touched the wall in 4 minutes, 33.24 seconds in the 500-yard freestyle on Thursday night to become the first known transgender athlete to win a Division I national championship in any sport.

Thomas finished 1.75 seconds ahead of second-place Emma Weyant, who attends Virginia. Thomas’ time was a season best and a little more than 9 seconds off of Katie Ledecky’s 4:24.06 record.

The race began with the crowd cheering for each of the swimmers, but fans were noticeably quiet for Thomas’ introduction. Save Women’s Sports founder Beth Stelzer draped a vinyl banner with the organization’s phrase over the railing.

During the race, Thomas was alternately tested by Olympians Brooke Forde (Stanford), Erica Sullivan (Texas) and Weyant. Thomas led early, but was passed by Sullivan and trailed for most of the first half of the race. Thomas and Weyant went stroke-for-stroke in the back half of the race, but Thomas pulled away over the final 150 yards to win her first national championship.

“It means the world to be here,” Thomas said in an interview with Elizabeth Beisel after the race.

Thomas, who declined to attend the NCAA-required postrace news conference, told Beisel she has been trying to tune out the distractions. “I try to ignore it as much as I can,” Thomas said. “I try to focus on my swimming, what I need to do to get ready for my races. And just try to block out everything else.”

As she stood on the podium with her trophy, she flashed a peace sign, just as she did for her four Ivy League championships. And once again, the crowd was noticeably quiet as she was announced as the champion.

Thomas returns to the pool Friday morning for the 200-yard freestyle prelims. She also is scheduled to compete in the 100 on Saturday.

“It’s a symbol of Lia’s resilience,” Schuyler Bailar, who at Harvard became the first known transgender man to compete on a Division I men’s team, told ESPN. “The fact that she’s able to show up here, despite protesters outside, people shouting and booing her, I think it’s a testament to her resiliency. And it’s also a symbol that we can both be who we are and do what we love.”

“Any hate is unnecessary,” Virginia junior Lexi Cuomo said after the Cavaliers won the 200 freestyle relay. “We need to look at it as we’re all competitors right now. We’re focused on ourselves and our team. Our first and foremost goal is to win a national title.”

After posting the nation’s top times in the 200 and 500 freestyle events in December at the Zippy Invitational in Akron, Ohio, Thomas garnered national attention. Her success in the pool drew both praise and criticism. Some of that criticism was on full display in Atlanta.

Outside of the McAuley Center, dueling protests dominated the morning. More than 20 protesters from Save Women’s Sports and Young Women for America (the college branch of Concerned Women for America) chanted outside, protesting Thomas’ inclusion in the women’s category.

The group also included Idaho state Rep. Barbara Ehardt, the author of HB 500. HB 500 was the first law restricting transgender athletes’ ability to play sports in accordance with their gender identity. It has since been blocked in federal court.

“We’re not going to stand by and let women be displaced,” said Annabelle Rutledge, the national director for Young Women for America. “We must fight for their rights.”

Concerned Women for America announced Thursday that the organization filed a Title IX complaint against the University of Pennsylvania. CWA contends that Penn is violating Title IX by allowing Thomas to compete on the women’s team.

“The future of women’s sports is at risk and the equal rights of female athletes are being infringed,” CWA president and CEO Penny Nance said in a statement. “We filed a formal civil rights complaint against UPenn in response to this injustice.”

This is not the first Title IX complaint CWA has filed in response to a prominent transgender athlete. After Franklin Pierce University (FPU) track athlete CeCe Telfer won a Division II national championship in the 400m hurdles in 2019, CWA filed a Title IX complaint with the Office for Civil Rights (OCR) at the Department of Education. The OCR found that FPU’s transgender inclusion policy violated Title IX and the school was forced to rescind its policy. The Department of Education has not yet responded to CWA’s latest complaint.

On the other side of the street from Save Women’s Sports and CWA were a dozen counterprotesters, who were Georgia Tech graduate and undergraduate students.

Another counterprotester, who wished to be acknowledged by only her first name, had words of support for Thomas.