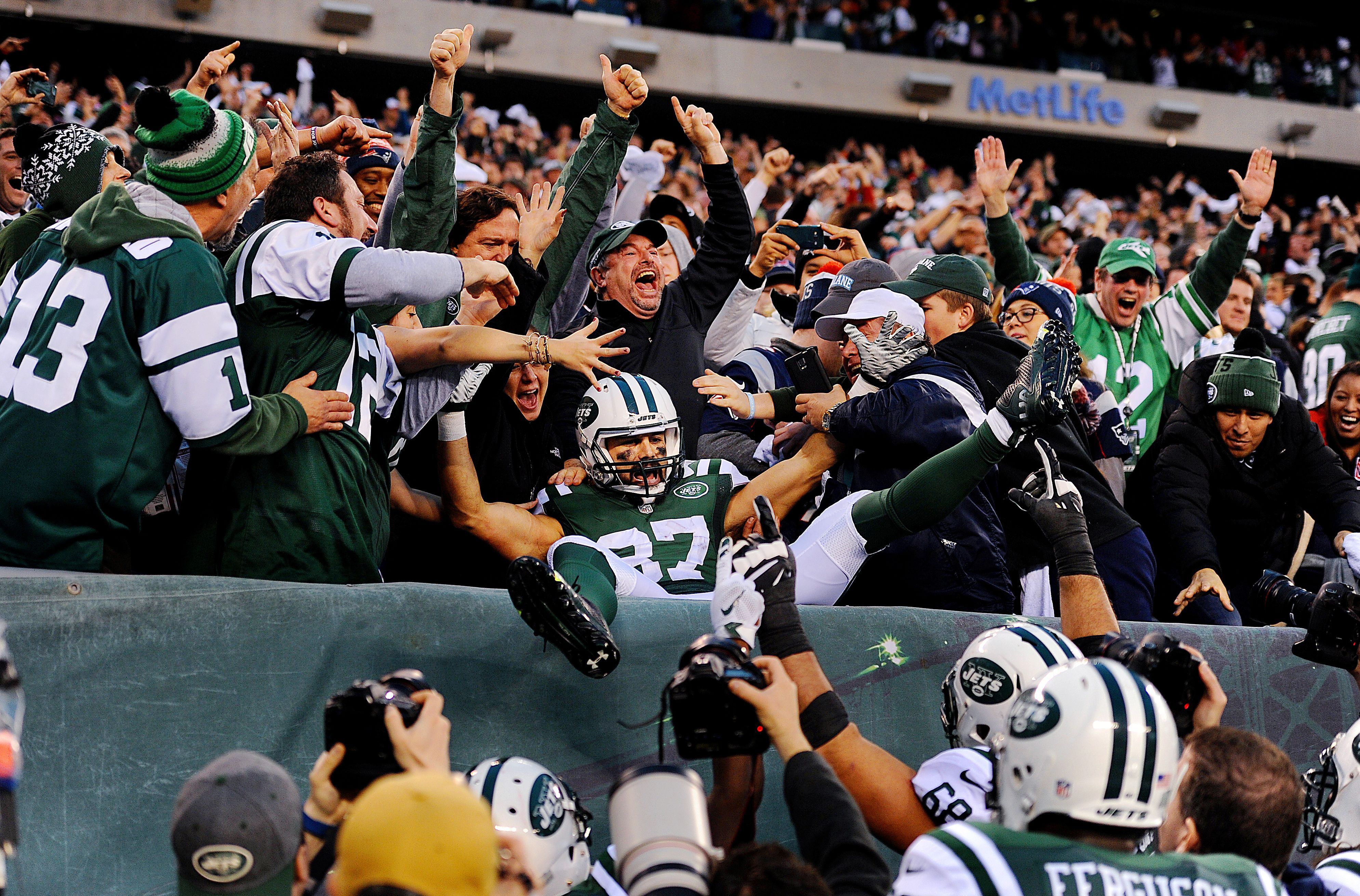 Seven years ago, the New England Patriots and New York Jets played an overtime classic that inspired tears of joy and a bizarre controversy. The tears dried quickly, but the controversy lived on.

The Jets, kicked around by their AFC East rival for 15 years, celebrated their 26-20 win over the reigning Super Bowl champions in a raucous and emotional home locker room. The victory, punctuated by Eric Decker’s Lambeau-style leap after his game-winning touchdown catch, put the Jets on the verge of their first playoff berth since 2010.

In the moment, it was a breakthrough for the franchise and first-year coach Todd Bowles. Reflecting on Dec. 27, 2015, cornerback Darrelle Revis said, “That was the stamp that said, ‘We’re here in this AFC conference, we’re not going to be pushovers, we’re ready to compete and contend.'”

Wide receiver Brandon Marshall called it “the greatest feeling I ever had playing ball,” saying he got choked up amid the euphoria. He wasn’t alone.

The great irony is they were helped by former Jets assistant and longtime tormentor Bill Belichick (36-11 versus Jets as Patriots head coach), who made one of the worst tactical decisions of his illustrious coaching career. The Patriots won the coin toss to start overtime but elected to kick off to the Jets, who scored on the first possession to end it.

Belichick’s strategy was so unconventional it sparked “Coin-toss Gate,” with many wondering to this day if captain Matthew Slater botched his marching orders by making the wrong call — which he emphatically denies. He still gets approached by fans who want to know what really happened that day.

What happened to the rivals in the ensuing days and years is a matter of record. The Jets did not make the playoffs that season; they dropped the final game and would lose 70 of 97 games over the next five seasons. The Patriots stumbled in the 2015 playoffs, but would go on to win two more Super Bowls (LI, LIII), collecting their fifth and sixth Lombardi Trophies.

The Patriots also reasserted their dominance over the Jets, taking the next 13 meetings — which is tied for the longest active winning streak over a single opponent.

What was at stake in the rivalry?

The game was rife with storylines. It was a must-win for the Jets (9-5), a veteran team galvanized by quarterback Ryan Fitzpatrick. They lost the previous meeting 30-23 after blowing a fourth-quarter lead in Foxborough, Massachusetts. The Patriots (12-2), who needed a win to secure the top seed in the playoffs, saw the Jets as a worthy rival.

James White, Patriots running back: It’s always been a good [rivalry], no matter what the teams’ records are. The majority of times it’s not high-scoring, and you know it’s going to be a physical game, especially in the trenches.

Revis: For me, it was bittersweet, coming off a Super Bowl win with the Patriots [2014 season] and going back to the Jets. Understanding and knowing what this rivalry means from both sides of the spectrum, you knew it would be a dogfight. To win the AFC East, you had to go through Tom Brady and the Patriots.

Ian Eagle, CBS play-by-play announcer: That was a really confident Jets team. They had something about them that they believed they belonged. Fitzpatrick was having the best season of his career and everybody followed his lead. The locker room was very loose and light, and that had a lot to do with Fitz.

Marshall: If you go back to the first game [a Week 7 30-23 Patriots win], I lost the game for us. We had an opportunity to go up two scores and Fitz threw a beautiful [pass] and I dropped the ball. I’ll never forget going to the sideline and saying, ‘That’s the game.’

During postgame film study, Marshall discovered he was tipping certain routes, allowing the Patriots to adjust their coverage. In the rematch, the Jets countered with their own adjustment, which allowed them to anticipate and beat double-teams. Marshall caught eight passes for 115 yards and two touchdowns, including a 33-yarder that gave the Jets a 17-3 lead.

Fitzpatrick: Brandon’s long touchdown was one of my favorites of my career. We knew it was a touchdown on Tuesday, watching film, and he came through.

Marshall: It’s a chess match when you play them. I started watching film and what we saw was: How they played me determined everything. If [the cornerback] was pressing me outside, everything was determined by what foot I had up. That’s how detailed Coach Belichick is. If I put my right foot up [it] determined how they played us.

White: We didn’t play very well, and we were trailing most of the game.

Tied 20-20 at the end of regulation, the result of Brady finding White for a 9-yard touchdown at the two-minute warning and then a Patriots defensive stop at midfield, the teams headed to overtime. CBS television cameras showed Belichick meeting with special teams coach Joe Judge and captains Slater, Rob Ninkovich and Jerod Mayo on the sideline before sending them to midfield for the toss. Referee Clete Blakeman and Jets players Antonio Cromartie, Calvin Pryor III, Buster Skrine and Revis were also at midfield. Slater called heads (which was represented on the coin by an eagle) and the coin came up heads. That’s when things took an unexpected twist — Slater saying the Patriots would kick.

Marshall: I remember thinking, ‘What the hell did the greatest coach of all time just do?’ I was like, ‘What does he know that we don’t know?’

White: I don’t remember the coin toss exactly, but I know it had something to do with Slate. (laughing)

Slater: I remember getting blamed for that whole thing! And I would just like to clear the record for one final time: As we went to the coin toss there, I had instructions from Coach what we wanted to do.

The Patriots also chose to kick off to start overtime during a 2013 game against the Denver Broncos. Belichick said the wind affected the decision then, and it worked out that time, as New England went on to win 34-31.

Ninkovich: I was happy because I was just standing there and didn’t have to say anything. Initially, when we decided to do what we did, I was like, ‘What? Does that make sense?’

Eagle: The coin is usually perfunctory in overtime. The team that wins takes the ball and tries to win the game. So the fact this was so against the grain, that was so striking in the moment.

Fitzpatrick: I felt like the decision to kick off was a mistake by their captains. There seemed to be some confusion.

Slater: I was simply asking Clete once we made the decision the Jets were getting the ball, ‘Don’t we get to choose which way we want to kick?’ I’ve been known to be animated with facial expressions. I think folks saw my animated face and assumed that Slater had gone out there and made a blunder. But let the record state that there was no blunder!

Eagle: It goes against all conventional wisdom, but it’s Bill Belichick, so you have to at least respect the idea that he has a plan in mind. The mad scientist part of it enters the equation.

Scott Zolak, Patriots radio analyst: My natural reaction was ‘What the heck are we doing here?’ Then you have to remember situational football and how Bill Belichick is so different than everybody else.

Ninkovich: Know how the referee does the coin toss and then they direct you? I remember almost not knowing what to do. I was like, ‘I guess I’ll just shuffle my feet and go with what everyone else is doing.’ Just a strange situation.

Zolak: Most teams would say ‘Give me the ball. Let’s go with it!’ As opposed to Belichick, who is thinking, ‘The conditions are really windy.’ It took me back to the overtime victory over the Broncos [in 2013] when [Denver’s] Wes Welker was involved with a muffed punt because of windy conditions.

Eagle: I presume [Belichick] thought they were going to stop them on a three-and-out and have great field position and go win the game. That’s the only option you can think of. I don’t think it was Jedi mind tricks.

Ninkovich: It was pretty quick. Usually in overtime, things can kind of settle themselves out — one drive, punt, another drive. This was like ‘Bang, bang, bang — game over!’

Belichick (to reporters the next day): I clearly thought that was our best opportunity, so that’s why we did it. I didn’t like the way it worked out, but to me that was the right decision for our team at that time.

Slater (laughing): I remember Coach, right after the game, essentially told everyone that I did exactly what he asked me to do. I always found it comical because people ask me about it all the time, and I say, ‘Do you think Bill Belichick would send me back out to the coin toss, in a Super Bowl setting, if he thought I couldn’t go out there and relay the orders [if I] messed it up against the Jets?‘ Hopefully that sets the record straight for some.

Marshall: We made them pay. It was phenomenal.

Fitzpatrick: It was a run-pass option. I felt like he had good leverage and a good matchup on Malcolm Butler, so I decided to give him a chance. He got a great release and beat Butler with speed to the back pylon for the TD. Sweet.

The Patriots lost their season finale at Miami, which cost them home-field advantage in the AFC playoffs. Instead of hosting the AFC Championship Game, they traveled to Denver and lost to Peyton Manning & Co. The Jets traveled to Orchard Park, New York, to face former coach Rex Ryan and the Bills. They fell behind 13-0, closed the gap to 19-17 late in the third quarter, before falling 22-17.

Marshall: I was like, ‘This is going to be my first time in the playoffs; now we just have to go beat Buffalo.’ Screw Rex Ryan. He should have let us have that one.

Slater: There was a sting there that lingered for a while. You felt like you let one get away.

Marshall: The only part I didn’t like about that [Patriots] game was we celebrated like we won the Super Bowl.

Slater: Obviously on a personal level, it didn’t sit well with me. I felt like I had been — not fully blamed, but there were certainly fingers pointed in my direction. It was frustrating. That speaks to this rivalry. Crazy things have happened. I don’t think anyone would have thought we would’ve lost that game, but we did.

It marks the last time the Patriots lost to the Jets — 13 straight wins for New England.

Eagle: You tend to forget about it because it’s not like New England has dominated the rest of the league [in recent years], but their dominance over the Jets remains. It speaks to the Jets desperately seeking stability.

Fitzpatrick: The Patriots always challenge you at the quarterback position — eliminate the easy throws and take away the things that make you comfortable. If they sense blood in the water, like the infamous ‘seeing ghosts’ game, they will just keep attacking.

Revis: Their dynasty, they’ve done amazing things, things we may never see again in our lifetime. My hair stands up on my back when we played these rivalry games to try to disrupt somewhat of their legacy.

Since this game, teams that won the OT coin toss chose to receive 82 out of 83 times, going 46-31. The lone exception was when the Pittsburgh Steelers deferred against the Baltimore Ravens on Oct. 6, 2019. They forced the Ravens to punt with a three-and-out before receiver JuJu Smith-Schuster lost a fumble on the Steelers’ second play from scrimmage in OT. The Ravens got the ball at the Steelers’ 34 and ran three plays before kicking the game-ending field goal.