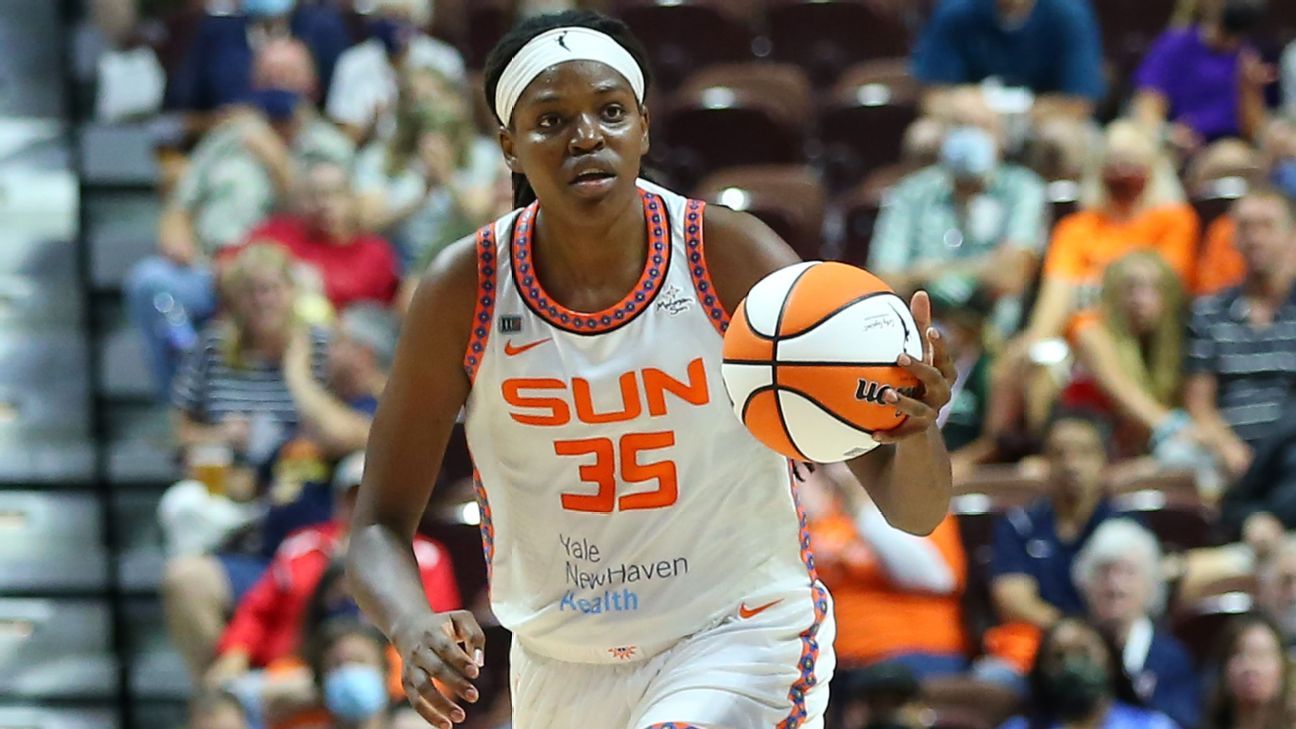 UNCASVILLE, Conn. — For the first time in years, 2021 WNBA MVP Jonquel Jones took the floor at Mohegan Sun Arena this week for the opening of training camp with the Connecticut Sun, a marked change from previous summers, when overseas commitments resulted in Jones arriving late to camp, often just before the start of the regular season.

This lead-up to the 2022 campaign has been different for Jones: Instead of having virtually no time off between her overseas and WNBA seasons, Jones hasn’t played organized basketball for nearly two months, as WNBA players who play overseas in Russia and Ukraine fled those countries in February following the Russian invasion of Ukraine. Brittney Griner, Jones’ teammate on Russian superteam UMMC Ekaterinburg, remains in Russian detention after Russian customs officials claim they found cartridges of hashish oil in her luggage when she was entering the country.

Jones’ experiences, both when she was still in Russia and as she looks ahead to how the current geopolitical crisis could affect her future professional decisions, offers a glimpse at the realities WNBA players face when playing overseas.

Jones said she never felt completely unsafe when she was in Russia, and nothing about her everyday life really changed, even amid the start of the invasion. UMMC Ekaterinburg, which is owned by a multibillion-dollar metallurgical company, keeps its American players insulated from much of Russian society. While they can move around freely, athletes have drivers and fly private to and from games. Everything they need is in their building.

“We’re really in a bubble in a sense,” Jones told ESPN on Wednesday. “But I never questioned my safety. Even when I lived in China, when I lived in Korea, I never felt like I wasn’t safe. So the war was the first time I really felt like, ‘Wow, like this is a new situation, unprecedented type of situation.'”

Getting stuck in Russia indefinitely became a primary concern for Jones and teammates — which included fellow WNBA players Courtney Vandersloot, Allie Quigley, Breanna Stewart and Emma Meesseman — especially when other countries began to ban Russian aircraft from entering their airspaces as a result of the invasion. The direness of the situation escalated for players, too, when Griner was detained on Feb. 17 and when the U.S. State Department issued a “do not travel” advisory in early March.

Working with the team’s travel agent, her own agent and the WNBA league office, which Jones said was in “constant contact and had some flight options before anybody else,” Jones and others decided it was time to go. Jones landed in Turkey on March 2, tweeting at the time, “All I want to do is cry. That situation was way more stressful than I realized.”

But there was a silver lining as Jones got to spend precious extra time with loved ones home in the Bahamas and Atlanta, a welcomed development given her basketball career pulls her in so many directions. In addition to her duties with the Sun and UMMC Ekaterinburg, Jones competes with the Bosnian national team, which will be playing in the World Cup this fall in Australia.

The WNBA announced on March 5 that all its players who had been playing in Russia and Ukraine had made it out of those countries. That is, aside from Griner, who still awaits her trial.

“I’ve been looking at these pictures that I have on my phone, the last set of pictures I took with her we were going to Valencia or wherever. We were all just joking and laughing around and stuff, and it’s just crazy how fast things can change,” said Jones, who added she has been in contact with Brittney’s wife, Cherelle Griner, checking in and asking for updates. “It’s definitely a s—ty situation. It’s tough, but there’s nothing that you can really do.”

The COVID-19 pandemic also disrupted the overseas offseasons of WNBA players. Still, Jones doesn’t think she can go without pursuing overseas opportunities down the line, even while WNBA commissioner Cathy Engelbert said recently that the narrative WNBA players still have to play abroad is a “little outdated and inaccurate.”

“I’m going to have to deal with it,” Jones said. “Because I feel like while the league is making the right and necessary strides to pay us more and ensure that if we don’t want to go overseas, we don’t have to, I just feel like in my situation, the money is not comparable. I have to think about the financial status of my family and everybody else, and also the opportunities that I’m leaving if I don’t go so.”

Jones reportedly signed a two-year deal this offseason worth $205,000 in 2021, slightly under the WNBA supermax of $228,094. But what she makes for a season playing in the WNBA, she makes in a month playing for Ekaterinburg.

Not all WNBA talent can make the sort of money Jones does overseas — or in the WNBA, for that matter — but they still are able to significantly supplement their incomes by playing in Turkey, China, Australia and elsewhere. With the recent formation of the Athletes Unlimited women’s basketball league, some, like Jones’ Sun teammate Courtney Williams, might seek to remain home and earn money that way.

“I would say probably when I’m leaving the league, players probably won’t have to do it, players of my caliber who are going to make that top dollar overseas, they’ll have the options to stay here and make the same money,” Jones said. “But I don’t think I’ll see it in my career. I hope so.”

Previous post Which Color Is Best For Your Bedroom?