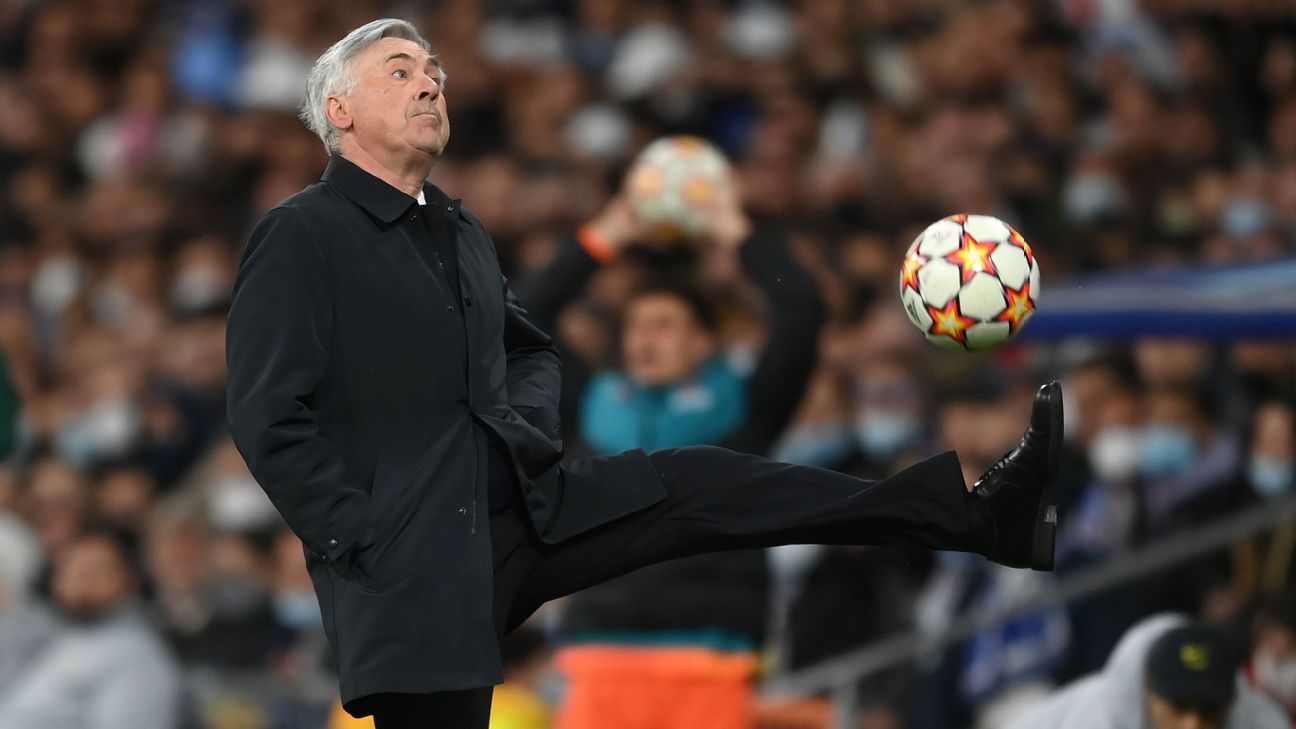 Real Madrid dug deep to produce a classic Champions League comeback as the 13-time winners came from behind to oust reigning champions Chelsea from the quarterfinals 5-4 on aggregate after two thrilling matches.

Los Blancos carried over a 3-1 advantage from the first leg but soon saw that wiped out at the Bernabeu as goals from Mason Mount and Antonio Rudiger levelled the aggregate score inside 51 second-leg minutes. A further goal for either side from Timo Werner and Rodrygo saw the encounter extend into extra time, when Karim Benzema once again emerged as the hero for Real by scoring a 96th-minute winner — the veteran France striker’s career-high 12th Champions League goal of the season.

With that, Real booked themselves a place in the Champions League semifinals for the 15th time in their history, considerably more than any other club (Barcelona and Bayern Munich are both on 12).

As for omens, the Spanish giants have now advanced from all five Champions League knockout ties in which they’ve faced the defending champions since 1992-93 and gone on to win the competition in all of the previous four instances.

“How can I explain the magic of this stadium? It helps the team and players a lot to never give up and we never gave up,” Real boss Carlo Ancelotti said after the game. “I’m very happy to be in the semifinal, the more you suffer, the happier I am!”

Ancelotti set a new landmark and further strengthened his claim that, if any coach is worthy of being known as “Mr. Champions League,” it’s him. Few can claim the sheer longevity enjoyed by the 62-year-old Italian, who has become part of the furniture in the latter stages of Europe’s elite competition and lifted the trophy three times.

Ancelotti has now reached the semifinals of the competition in four different decades as a manager — and that total goes up to five if you include his career as a player.

As a player, Ancelotti was part of the great AC Milan teams that won back-to-back European Cups in 1989 and 1990, a feat that would not be repeated for another quarter of a century until Real Madrid won their third in a row in 2018.

Almost exactly a decade later, Ancelotti returned to the semifinals of the Champions League for the first time as a coach when he successfully guided Juventus to the last four in 1998-99, after taking over from Marcello Lippi in February of that season. The Bianconeri were struggling for form but did at least manage to save some face in Europe by drawing 1-1 with Manchester United in the first leg of their semi at Old Trafford, before falling to a 3-2 home defeat in the second two weeks later. While Juve crashed out and limped to a disappointing seventh-place finish in Serie A, United went on to complete the Treble by beating Bayern Munich in the final.

Ancelotti spent eight years in charge at Milan between 2001 and 2009 and guided them to the semifinals of the Champions League on no fewer than four occasions. The first instance came in 2002-03, when the Rossoneri squeezed past rivals Inter Milan on away goals before beating Juventus in a thoroughly tedious final that was decided by a penalty shootout. The 2004-05 season saw Milan comfortably dispatch PSV Eindhoven in the semis before taking a 3-0 first-half lead against Liverpool in the final in Istanbul, only to be on the wrong end of one of the most stunning comebacks of all time and ultimately lose on penalties. Back-to-back semifinal runs then followed in 2005-06 and 2006-07, with the latter culminating in Ancelotti lifting the trophy for the second time as a manager after masterminding a 2-1 revenge victory over Liverpool in Athens.

After stints with Chelsea and Paris Saint-Germain yielded little in the way of European success, Ancelotti landed the Real Madrid job in 2013 and promptly returned to the final four of the Champions League. Firstly, Real beat Bayern Munich 5-0 on aggregate in the semis to reach the 2013-14 final, where they put another four goals past Atletico Madrid to win “La Decima” — the club’s record 10th victory in the competition, claimed an agonising 12 years after their ninth. Ancelotti then took Real back to the semis in 2014-15 only to see their title defence halted by Juventus, who emerged with a 3-2 aggregate victory.

It took seven years away and tenures with varying levels of success at Bayern Munich, Napoli and Everton, but Ancelotti’s return to the Bernabeu has also coincided with the extension of his esteemed Champions League semifinal record. The milestone was officially passed on Tuesday thanks to Real’s thrilling fightback against Chelsea. The former midfielder also got the chance to show he has not lost his touch with a nifty bit of ball control on the sidelines during the game.