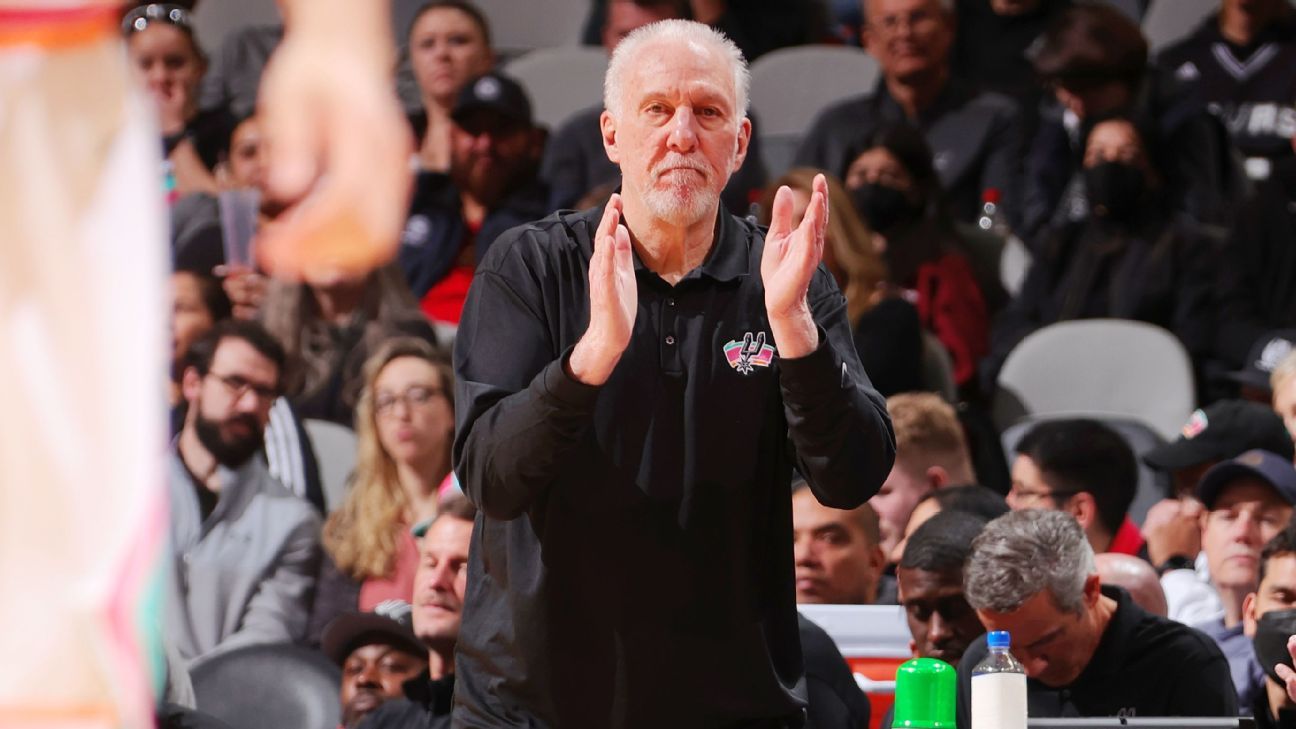 Gregg Popovich became the all-time winningest head coach in the NBA with 1,336 victories.

Popovich surpassed Don Nelson, who previously held the record for most regular-season wins, with the San Antonio Spurs’ 104-102 victory over the visiting Utah Jazz on Friday night.

“It’s just a testament to a whole lot of people,” Popovich said. “Something like this does not belong to one individual. Basketball’s a team sport. You preach to your players that they have to do it together and that’s certainly been the case in my life with all the wonderful players and coaches, the staff that I’ve been blessed with, the support of this wonderful city. The fans support us no matter what.

“All of us share in this record. It’s not mine. It’s ours, here in the city.”

The Spurs released a video from Nelson after the game, congratulating Popovich — whom he called one of his best friends — and telling him how proud he is of his former assistant’s accomplishments “and all the wonderful things you’ve done for basketball, worldwide.”

“I’m so proud of you for doing it,” Nelson said. “I couldn’t wait for this day to happen. And I just want you to know as one of my best friends in life I just wish you the best for your remaining years in the NBA.”

Handing off the all-time wins crown 🤝

Popovich, 73, is in his 26th season with the Spurs, the longest tenure of any head coach in all four of the U.S. major sports leagues.

“Gregg Popovich’s success with the Spurs is unprecedented in our league so it’s only fitting that he now holds the record for most career wins,” NBA commissioner Adam Silver said in a statement.

“His leadership and unwavering commitment to the game are widely admired by generations of players and coaches alike. Congratulations to Coach Pop on this latest achievement in his legendary career.”

Following the game, Popovich was presented with the game ball by Spurs All-Star guard Dejounte Murray in a joyful locker room celebration.

“Coach Pop you deserve it and we all love you and we’re glad we’re here to be able to enjoy this moment with you,” Murray said in presenting Popovich the ball to commemorate the feat.

Murray earlier had said the Spurs did not discuss Popovich closing in on the record but added that the players were ready to celebrate the milestone.

“Pop doesn’t like praise,” Murray said. “He doesn’t like any of that. It’s kind of a good thing. But you also want to remind him of his success because it’s rare. Because he’s a guy that just wants to focus on winning and every day. He never brings up anything to praise himself.

“We don’t talk about [the record], but we damn sure going to enjoy it when we do get it for him because he’s a great man and he deserves it. He pushes all his players, whether you’re the first guy, last guy, G-League player, 10-day contract, he embraces you from day one. He deserves everything.”

“Very happy for Pop,” Parker told ESPN. “Very happy. That is a helluva achievement. Well-deserved. That shows his hard work ethic and longevity.”

Popovich, who was named among the NBA’s 15 greatest head coaches of all time in February, has won five championships and three Coach of the Year awards. He has a record 23 consecutive winning regular seasons and also had a streak of 22 straight playoff appearances.

“He’s just the greatest coach to ever lace them up,” Nelson told ESPN. “When I hired him as an assistant coach, I figured he could learn something from me. But I learned more from him than he learned from me, that’s for sure.”

He’s the fourth coach, going back to the end of the NBA’s first season, to stand atop the wins list. Red Auerbach held the mark for about a half-century, followed by Lenny Wilkens, followed by Nelson — and now, Popovich.

“The ironic thing about this is Nellie gave me a job when I didn’t have one back in ’92,” Popovich said. “He took me on. To be in this position, as the same breath as him, is in my opinion undeserving and quite awkward because he was so wonderful in saving my family’s ass. So, it’s ironic that I’m sitting here in this situation.”

Popovich was with Golden State for two seasons before returning to San Antonio as the general manager and vice president of basketball operations in 1994.

During the 1996-97 season, Popovich moved back to the bench, taking over as head coach, where he has remained ever since.

“It’s like a no-brainer,” said Milwaukee head coach Mike Budenholzer, who spent 17 seasons as a Spurs assistant coach. “If you want to do the top three or the Mount Rushmore [of coaches], I don’t think there’s any doubt where he is and where he belongs. The success, consistency and the longevity, and the impact he’s had on an entire organization, on individual players, on coaches, on GMs, on scouts, on equipment guys, on families. He’s been incredibly impactful in just so many ways that go way, way beyond the wins and the games and the championships and all those things.

“Just the consistency to have it, not now, but for 20 years to be a championships contender, playing for championships and playoffs, I just don’t think you will ever see that again from one organization, from one coach. That run, the [New England] Patriots kind of similar, I think that is the thing that I know I am probably the most in awe of.”

With the Spurs in a rebuilding phase, wins have been tougher to come by for Popovich this season. But those close to him point out that this is just another example of his greatness — his ability to adapt to the times, the changing game and talent and skills on his roster.

“I think he’s adjusted, he’s adapted,” Hall of Fame center David Robinson told ESPN. “He’s won under different circumstances with different mixtures of teams. We were a dominant defensive team, to [the teams] with Kawhi [Leonard] and all those guys, they were dominant offensively. They had a nice mix [on both sides]. And even now, you see how he’s had to adjust to a very, very different team.

“I think that’s what’s made him great. How do you win 67% of your games or whatever it is for 25 years? It’s ridiculous. It’s pretty amazing.”

Popovich has long had the respect from his players and his peers. Besides his coaching success, Popovich has always been vocal about what he believes in, taking stands for social justice and racial equality.

And while Popovich has now won more games than any other NBA coach, some of his players and staff members also remember how he did some of his best work after excruciating losses by keeping his team together.

After an overtime loss in Game 6 of the 2013 NBA Finals, when the Spurs lost in part due to Ray Allen’s iconic 3-point shot, Popovich gathered his team for dinner in Miami and consoled each of his devastated players. The Heat beat the Spurs in seven games, but San Antonio bounced back to beat them in the Finals the next season.

“After losing Game 6 when it was almost the championship won, his phrase was [often], ‘Win it together. Lose it together. Man’s got to eat.’ So we ate together,” longtime Spurs forward Manu Ginobili told ESPN. “We talked and basically cried together, and we looked at each other and he went one table at a time with different players, had conversations and tried to cheer us up when we were devastated. That was another great example of leadership and trying to hold us together and optimistic about the next one or trying to find answers.”