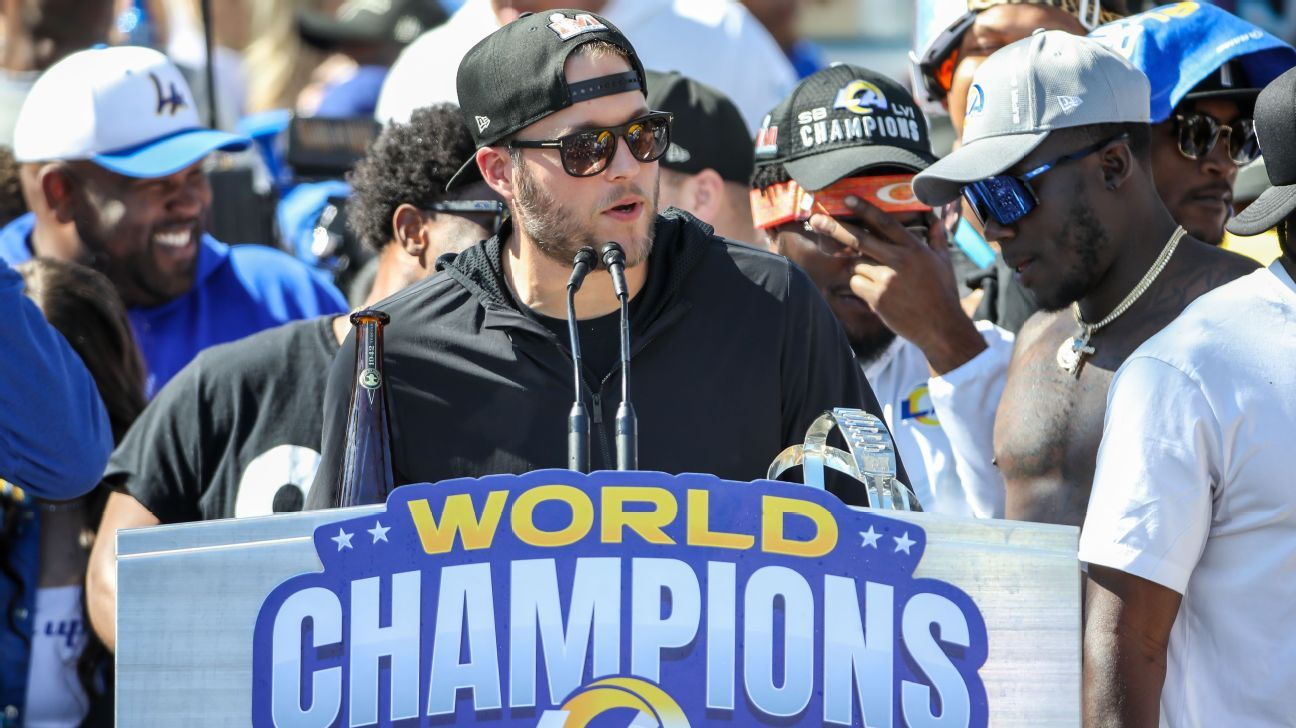 The Rams and Matthew Stafford have reached agreement on a four-year, $160 million extension that includes $135 million guaranteed and should allow the veteran quarterback to finish his career in Los Angeles, sources tell ESPN’s Adam Schefter.

Stafford is cashing in on his spectacular debut season with the Rams after 12 seasons with the Detroit Lions, who traded the 2009 No. 1 overall pick to Los Angeles a year ago. Stafford would be 38 years old in the final season of the extension.

Stafford is headed into the final year of his previous five-year, $135 million deal signed in Detroit, but he repeatedly said he had no interest in going anywhere.

His new deal also is clearly calculated to allow the Rams to retain more of their championship core while adding new pieces, since Stafford almost certainly could have received more money at the top of the quarterback market. Aaron Rodgers’ new deal with the Packers is essentially a three-year, $150 million contract.

Stafford never won a playoff game in 12 seasons with the Lions, but he realized the enormous potential of winning a Super Bowl immediately after joining coach Sean McVay and a talented offense including Cooper Kupp, who became the NFL’s receiving leader in the first year of their partnership.

Stafford set a franchise record with 4,886 yards passing in the 17-game regular season, and he tied Kurt Warner’s team mark with 41 touchdown passes while leading the Rams to the NFC West title.

He then excelled in the first four playoff victories of his career, passing for 1,188 yards and nine touchdowns with just three interceptions. He led game-winning drives in the fourth quarter of the Rams’ final three postseason games, including their Super Bowl victory over Cincinnati at SoFi Stadium.

The Rams also are working on a contract extension for All-Pro defensive tackle Aaron Donald.

Stafford’s deal will alter the amount of room under the salary cap for the Rams, who have already lost several free agents this month. But Los Angeles signed talented veteran receiver Allen Robinson this week, and the team is hoping to retain Odell Beckham Jr. as well.