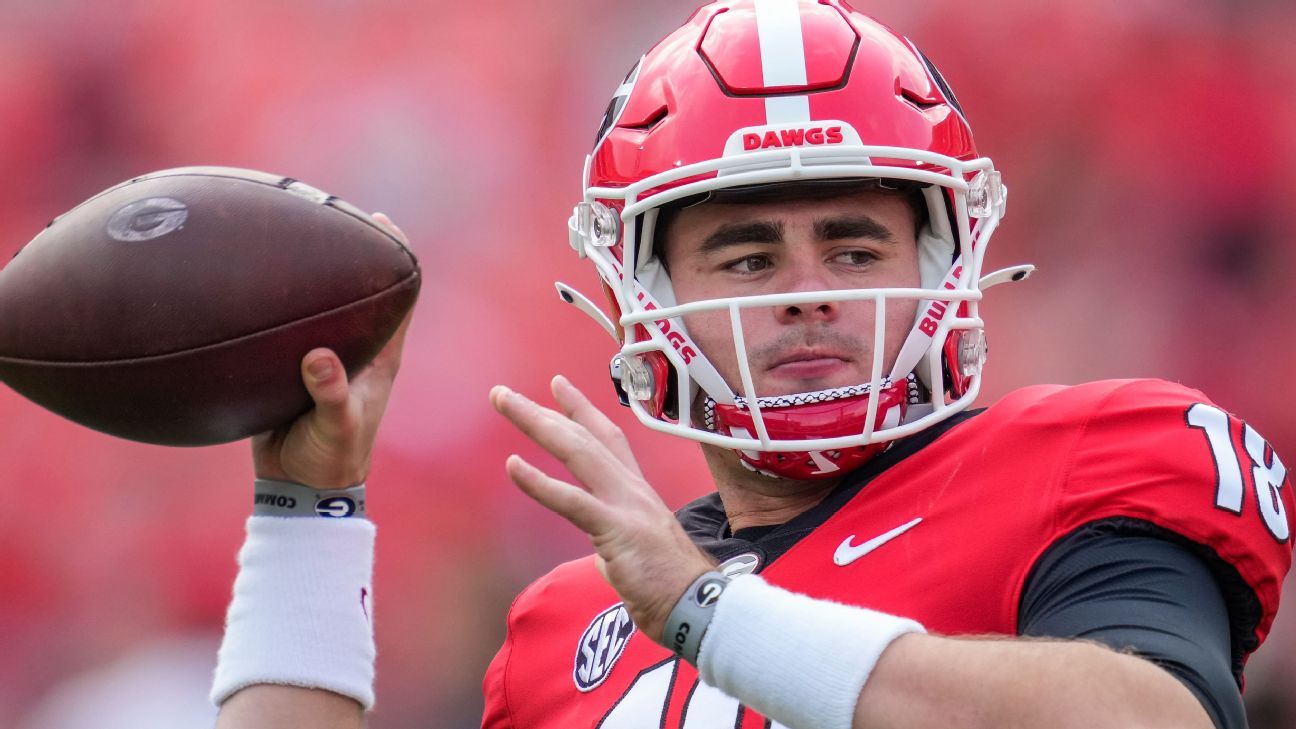 The winding collegiate career of quarterback JT Daniels has turned onto a country road.

Daniels told ESPN that he’s transferring to West Virginia and that he called coach Neal Brown and informed him of the decision Wednesday morning.

Daniels was the most notable player remaining in the NCAA transfer portal. The 6-foot-3, 210-pound quarterback went 7-0 as a starter over the past two seasons at Georgia.

“Going up and down the roster, I feel like they have very, very good pieces everywhere,” Daniels told ESPN in a phone interview. “It feels like a great fit for quarterback. I feel like there’s a really, really, really good team that I’m going to step into and do my part to contribute.”

Daniels transferred to Georgia after playing the 2018 and 2019 seasons at USC. He’s a former ESPN 300 recruit from Mater Dei High School (Orange County, California) — one of the country’s most prolific quarterback incubators.

He chose West Virginia over Missouri and Oregon State after taking visits to all three in recent weeks. The confluence of a strong complement of five returning offensive linemen with 107 combined career starts, experienced skill players and the impression left by Brown led to Daniels choosing the Mountaineers.

Daniels said the familiarity with the Air Raid system that Harrell ran at USC will help ease the transition, as the offense is essentially the one he learned back in 2019.

“It definitely helped knowing Graham coming into it and having a really good relationship with him,” Daniels said. “Knowing that I trust that offense and that system, and I believe in it. I also feel really comfortable with Coach Brown and the ideas that he has and the way that he runs a program.”

Daniels also enjoyed Morgantown and said he felt comfortable there.

“I loved it,” he said. “It feels very Athens-ish, which is a quintessential college town [and] which I have really, really enjoyed living in.”

Daniels is a pure pocket passer who has flashed at times during a college career that has been undercut by injuries. He completed 69.5% of his passes and averaged 9.7 yards per attempt over two seasons at Georgia, which are the highest numbers of any Bulldogs quarterback with more than 200 attempts.

After being named just the second true freshman quarterback in USC history to start an opener back in 2018, Daniels flashed promise while starting 11 games and throwing 14 touchdowns.

From there, injuries defined his next three seasons. As a sophomore, an ACL injury suffered in the 2019 opener washed out that season and led to his transfer from USC to Georgia.

His recovery lingered into the 2020 season with the Bulldogs, inhibiting him from starting early that season. He did start the final four games that year, including a Peach Bowl win over Cincinnati, which included three fourth-quarter scoring drives and 392 total passing yards.

Daniels entered 2021 as a favorite to win the Heisman Trophy and a top-ranked NFL draft prospect. He started three games during Georgia’s 2021 championship season, including the opening win against Clemson. Both an oblique issue and a lat muscle injury dogged Daniels, who also won September starts against South Carolina and Vanderbilt. He played only a quarter against Vandy and left the game because of the lat injury after starting 9-for-10 passing.

Daniels stressed that he doesn’t feel snakebit by the injuries, saying he takes “personal accountability” for them.

“The No. 1 thing [that I need to prove] is that I can stay healthy,” Daniels said. “If there’s one thing I haven’t proven, it’s that. I’ve missed 35 games in three years.”

Upon arriving at West Virginia, he’ll enter a quarterback competition that’s defined by a lack of experience. None of the current quarterbacks have started a game for the Mountaineers.

Returning scholarship quarterbacks Garrett Greene and Will Crowder bring little experience, as they combined for 175 passing yards last season. Incoming freshman Nicco Marchiol is an ESPN 300 recruit in the Class of 2022. Jarret Doege, who started the past two seasons, transferred to Western Kentucky.

If Daniels wins the job, he’ll play behind an offensive line that features all five starters returning. That includes center Zach Frazier, who should be among the best in the country at his position, and tackle Wyatt Milum, who was regarded as one of the country’s best freshman tackles last season.

West Virginia has gone 6-7 and 6-4 the past two seasons under Brown, and there’s the potential for an experienced starter at quarterback to make a difference in helping the program turn the corner.

Daniels brings the most experience and the best skill set to the group, and his arm talent could pair well with experienced returning receivers Sam James and Bryce Ford-Wheaton, who have combined for 2,676 career receiving yards.

“They have plenty of skill guys,” Daniels said. “There’s no question there. And they’ve been a [top-ranked] defense the last five years. It feels like a really good, complete team that I want to be a part of.”

Daniels is in the midst of finishing his courses to graduate from Georgia and will be immediately eligible at WVU as a graduate transfer. He stressed how much he enjoyed his experience as part of the program and winning the national title last season.

“I love Georgia and Georgia has always loved me since I’ve been here,” Daniels said. “It’s been a really, really good and supportive fan base. I’m very, very thankful. I had no problems adjusting. I wouldn’t even consider it an adjustment. Everyone here has been good and honest and good people.”

West Virginia opens the season in 2022 at rival Pittsburgh on Sept. 1. The game known as the Backyard Brawl could have a Southern California flair, as former USC quarterback Kedon Slovis transferred to Pittsburgh this offseason.