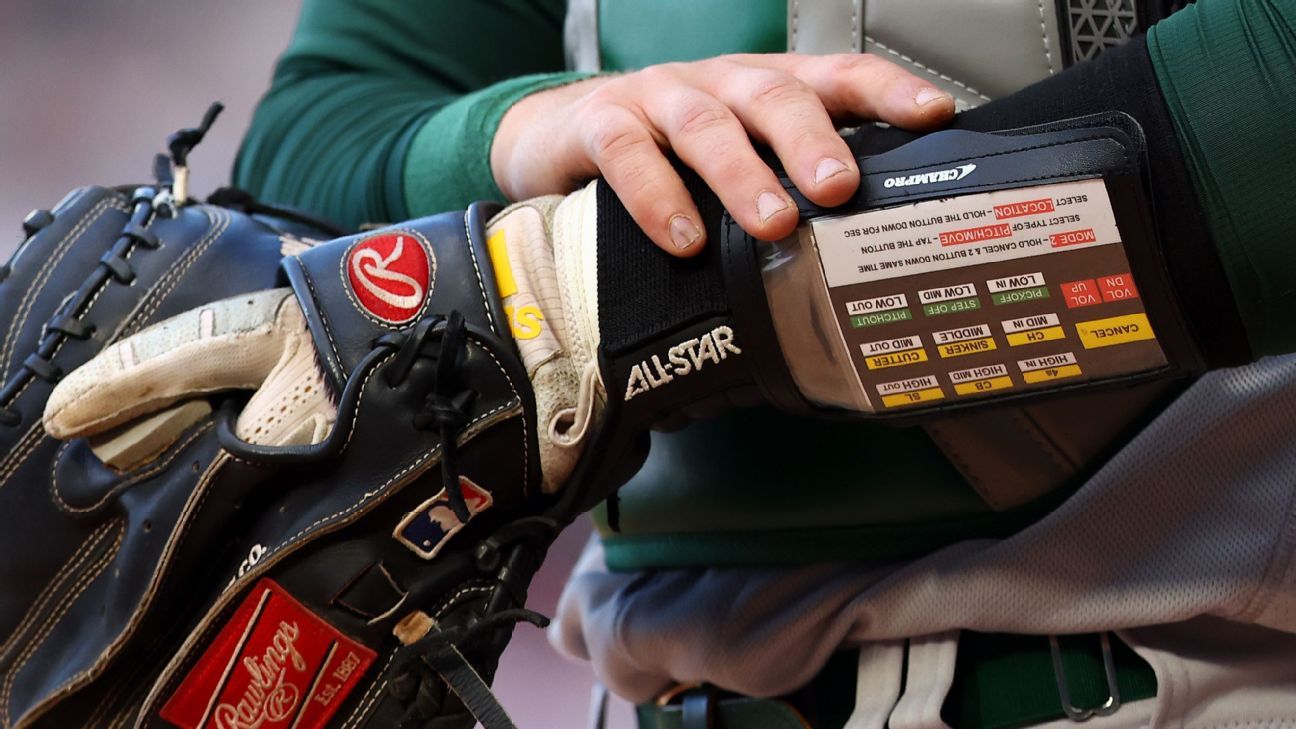 The electronic device, used to transmit pitch signals from the catcher to the pitcher in an effort to curb sign stealing, is brand new in Major League Baseball this season, and Barlow wondered what could go wrong. The PitchCom’s speaker made his hat fit less comfortably. Catchers were worried hitters might be able to overhear the signals in their helmets. There was concern among players about radio connectivity issues, or what would happen when crowd noise drowned out the audio. But for Barlow, the device’s potential quickly outweighed his initial concerns.

“This is bigger than I would expect,” Barlow said about his first impression of the device. “But I was like, ‘Put it in my hat, I don’t care.’ In the past you get hit around and you’re asking if your stuff is not on or if you’re tipping your pitches or they’re stealing your signs. Now, if you get hit around, you know it’s all on you.”

For more than a century, signs have been relayed to pitchers — from Cy Young to Max Scherzer — through a sequence of finger movements by the catcher. But for the 2022 season, MLB digitized the experience by offering backstops a remote control on their wrists and pitchers a speaker in their hats that vocalize the signals, a potential added layer of protection against sign-stealing. Stealing signs has long been a part of the game’s culture, but it has been a hot-button issue in recent years due to teams misusing technology to gain an unfair advantage — most notoriously, the Houston Astros and their infamous trash-can banging scandal.

Barlow’s conversion from PitchCom skeptic to fan mirrors the experience of many teams around baseball. Every pitcher on teams like the Rangers and New York Yankees now use it, telling ESPN their reasons range from competitive advantages to a faster pace of play to reduced anxiety on the mound.

“We all love it,” said Yankees reliever Michael King. “We actually want the catchers to give us signs faster. We’re thinking about it, like after he throws the ball back to me, I’d rather know it right then. It gives you time to think about the pitch and throw it with conviction. I come set knowing that I have no doubt in my mind that the catcher is thinking something differently than me.”

That benefit extends beyond pitchers and catchers. Each team can use three additional ear pieces, distributed by most teams to a combination of the second baseman, shortstop, third baseman and center fielder. Rangers utility man Brad Miller said he used to try reading the signs from the catcher to prepare for plays, but using PitchCom helps him quickly anticipate where a ball might be hit.

We dig into the topic shaping the season and what it means for MLB’s future.

Everything you need to know

“It used to be if you’re not alert the whole time, you could miss the signs,” Miller said. “It’s way easier to be on every pitch like, ‘Hey, Aaron Judge is up there, you know that if it’s a fastball, it’s probably going one way and if it’s a curveball, it’s going this other way.’ It’s a softer focus. We’ve made the comment among the fielders and the pitchers, too: If you’re not using it, I just can’t believe it. What are you doing?”

As enthusiastically as some teams and players have embraced the new technology, others have chosen to stick with tradition. While the rest of his Chicago White Sox teammates now use PitchCom, reliever Kendall Graveman remains a holdout.

“There may come a day when I use it. I’m not going to rule it out,” Graveman said. “I still believe if you’re able to change up signs and be really creative that you can do it the old way. For me, that’s what I’m trying to do. I think it will evolve and get a little bit cleaner and I think it already has. When I was using it at spring training it was a little bit slow for me. When I step on the rubber I want to get to what I want to get to. I haven’t gone back and tried it since.”

“Baseball is baseball, man,” Manoah said. “Some things are good to be technological about, but I’m not here to make the game quicker. I’m here to win games. I’m not gonna sit here and be all confused about a PitchCom or have hitters step out of the box every two seconds because the pace is too fast.”

From the Sugar Kings to the Serpientes, the South Side to Wrigleyville, we break down the best and worst of baseball’s latest fashion trend. Joon Lee »

The opinions of Graveman and Manoah represent the minority among players ESPN spoke with about PitchCom, but the technology does have room for improvement. Blue Jays catcher Zack Collins said the device can have some issues when switching between pitchers with different arsenals.

“There aren’t many kinks, but it would be great to customize the buttons towards the guy on the mound so we can work a little bit faster,” Collins said. “The buttons have fastball, slider, curveball, change-up, knuckleball and splitter, and most people do not throw a knuckleball.”

And while players are largely satisfied with how PitchCom functions, Miller believes the voices on the machine could use some spice. The Rangers’ PitchCom uses the voice of a front office member and the Philadelphia Phillies use catcher J.T. Realmuto’s voice, Miller suggested some more variety.

“We really need some guests,” Miller said. “We just had George W. Bush stop by the other day. He needs to do PitchCom voices, like a celebrity GPS. The Dodgers should get Denzel Washington. That’s the next step.”

Next post ‘Celebrity Jeopardy!’ is coming — but who will be the host?