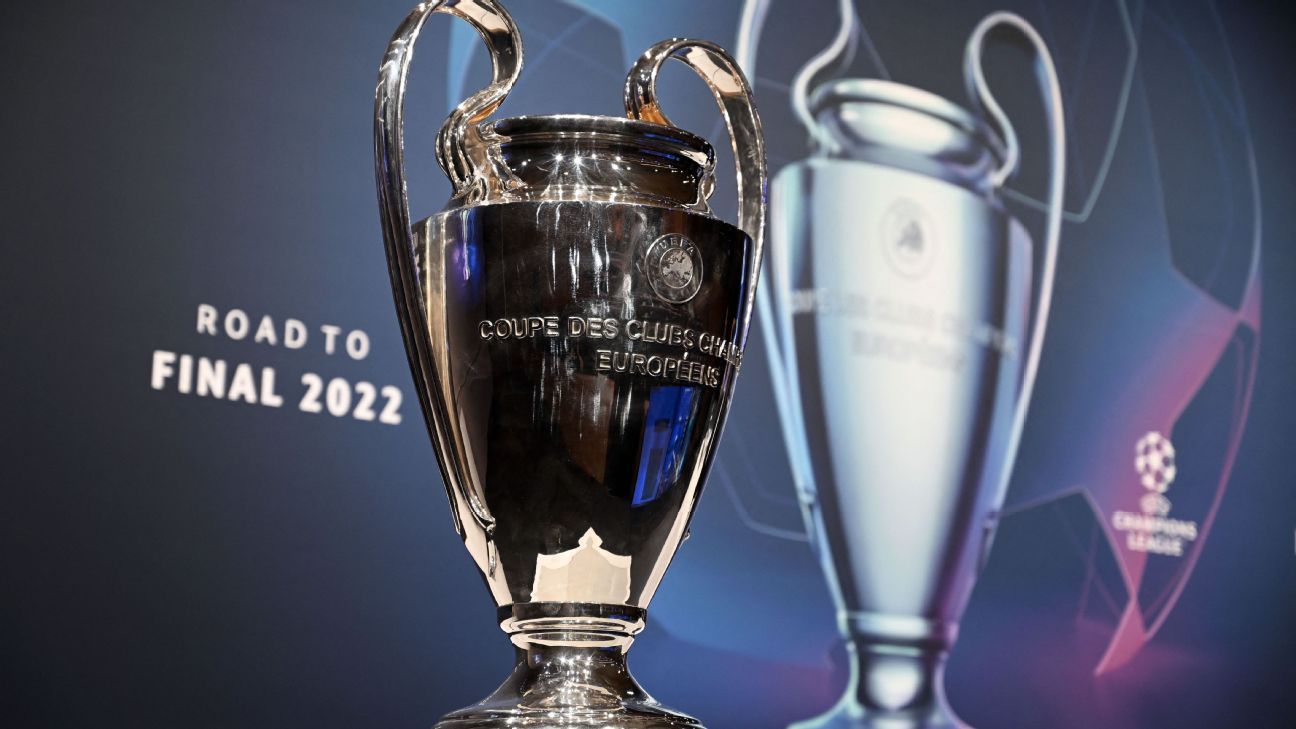 The path to the Champions League final in Paris on May 28 is now clear following the draw for the last eight and semifinals of the competition. The prospect of a heavyweight clash at the Stade de France remains alive, with favourites Liverpool and Manchester City, and Real Madrid and Bayern Munich, kept apart en route to the final.

Despite three English teams and three Spanish clubs reaching the last eight, no Premier League or La Liga clash came out of the pots for next month’s quarterfinals. Holders Chelsea will face Real Madrid for the second successive season, while City must overcome Manchester United’s round of 16 conquerors Atletico Madrid to maintain their hopes of a first Champions League title. Six-time winners Liverpool face Benfica, while Bayern have been paired with Villarreal following the Spanish club’s surprise 4-1 aggregate win against Juventus in the last round.

There promises to be a true clash of the titans in the semis, however, with the winners of Chelsea and Real drawn to face City or Atletico, while the other semifinal will see Liverpool take on Bayern if they win their quarterfinal ties.

So how will the quarterfinals play out, and who is most likely to meet in the semis and the final?

(All odds listed below are from Caesars Sportsbook)

First up is a repeat of last season’s semifinal, which Chelsea won 3-1 on aggregate on the way to beating Manchester City in the final to win the Champions League for the second time. That success extended Chelsea’s record of never having lost against Real: in five meetings, the English club has won three and drawn twice.

This is perhaps the most closely matched tie of the quarterfinals. Although Chelsea have struggled to keep pace with Liverpool and City in the Premier League, they are comfortable in third position and cruised past Lille in the last round. The off-field uncertainty surrounding the club following U.K. government sanctions against owner Roman Abramovich, who is attempting to sell the team, have not had an impact on results for Thomas Tuchel’s side, and last season’s success against Real will ensure they go into this tie with the belief that they can progress again.

Who will lift the trophy on May 28? Mark Ogden thinks it’ll be the Premier League and Bundesliga’s best meeting for the honor. FABRICE COFFRINI/AFP via Getty Images

Meanwhile, Real will be buoyed by their dramatic round-of-16 fightback against Paris Saint-Germain and, sitting 10 points clear at the top of La Liga, Carlo Ancelotti’s team will regarded themselves as favourites. Karim Benzema is displaying Ballon d’Or-winning form for Real this season and midfielder Luka Modric is also enjoying a renaissance at the age of 36. Real’s midfield is certainly ageing, but with Chelsea lacking a box-to-box midfielder to exploit their lack of mobility, Real have the edge.

Chelsea can always rely on Kai Havertz to make it count in a big game, but there are too many question marks over Romelu Lukaku and Timo Werner. If Havertz doesn’t perform, Chelsea will have problems.

This will be the first meeting between City and Atletico, but rival coaches Pep Guardiola and Diego Simeone have plenty of history in the Champions League, with Atleti eliminating Guardiola’s Bayern Munich on the away goals rule in the 2016 semifinal.

While City will be strong favourites to win this tie, the stylistic clash will ensure an intriguing encounter and Atletico could make it extremely difficult for City if Simeone can inspire the type of attritional performances his team have become renowned for during his lengthy reign as coach. Atletico will deny City the time and space on the ball that makes them the most complete passing team in world football, so Guardiola will have to out-think Simeone — overthinking in the Champions League has often led to the City coach weakening his team due to too many allowances being made for the opposition.

While Atleti can suffocate games, their attacking threat is not as sharp as it has been in the past, with Luis Suarez a fading force because of fitness concerns and Antoine Griezmann still searching for his best form since returning on loan from Barcelona last summer. Regardless, Joao Felix will give City problems.

Man United showed in the last round that Atletico can be caught out on the counter attack, but their mistake of hitting crosses and long balls into the penalty area will not be repeated by City. If Guardiola keeps it simple and trusts his players to get the job done, City will go through. But Simeone will set traps and ensure that his team are in the tie right until the end.

Unai Emery’s Villarreal produced the surprise of the last round by eliminating Juventus, winning 3-0 in Turin in the second leg, but they have strong European pedigree having beaten Manchester United to win last season’s Europa League final. But despite Emery’s tactical ability and track record of having won four Europa Leagues as a coach, the Champions League is a different matter. Bayern will be delighted to have been paired with a team that’s seventh in LaLiga with only a few weeks to go in the season.

Villarreal will attempt to stifle Bayern with a defensive game-plan, but always with the threat of goals from Gerard Moreno and Arnaut Danjuma. Yet as they showed in the round of 16 with a 7-1 second-leg win against FC Salzburg in Munich, Bayern are capable of overwhelming any opponent in ruthless fashion with attacking quality including Robert Lewandowski, Thomas Muller, Serge Gnabry and Leroy Sane.

The good news for Benfica is that they won the most recent Champions League meeting between the two clubs, eliminating Rafael Benitez’s reigning European champions by winning home and away in the 2005-06 round of 16. But Nelson Verissimo’s team will need more than history on their side to progress to the semifinals with Liverpool strong favourites to win this tie.

Benfica have displayed an ability to upset the odds by simply reaching the quarterfinals. The Portuguese team qualified from the group stage at the expense of Barcelona largely thanks to a 3-0 win in Lisbon in September. Their round-of-16 success against a highly rated Ajax team also highlighted Benfica’s capabilities.

Benfica shocked Ajax in the round of 16, but can they do the same to get past high-flying Liverpool in the quarterfinal? Getty Images

Uruguay striker Darwin Nunez has caught the eye with four goals in eight Champions League games, while Roman Yaremchuk and Rafa Silva will also test Liverpool’s defence. Brazilian striker Everton has yet to score in 11 games this season, so there would be some football irony if he managed to break his duck against Liverpool, of all teams.

Yet an experienced (but older) central defensive pairing of Nicolas Otamendi and Jan Vertonghen may prove a problem for Benfica against Liverpool’s fast-flowing attacks. Bayern Munich scored nine goals in two games against Benfica in the group stage, so Liverpool will already know where their weaknesses are.

Everything points to a Liverpool win, and a potentially comfortable one, but Benfica have proven themselves to be a spirited outfit this season, so they may make life difficult if they can start well in the first game at Estadio da Luz.

So who will meet in the final?

If the quarterfinals go to form, we can look forward to Man City vs. Real Madrid in one semi and Bayern Munich against Liverpool in the other, so nobody can argue that any club will go all the way this season on the back of an easy route to the final.

While Real have all the pedigree, with a record 13 Champions League titles, it is difficult to envisage Carlo Ancelotti’s team being good enough to beat City over two legs. And having reached the final for the first time last season, City have overcome the psychological hurdle of getting there, leaving no excuses for Guardiola and his players.

City will win the first semi and then await the winners of Liverpool vs. Bayern in the final, and that one would be much more difficult to call. Liverpool beat Bayern on the way to winning the Champions League in 2019, but Bayern are now a stronger outfit and their forward line is arguably even better than Liverpool’s.

Liverpool against Bayern will come down to the tightest of margins, and home advantage in the second leg might just swing the pendulum in Bayern’s favour. So I’m backing Bayern to win — just — and set up a final against Man City in Paris on May 28.