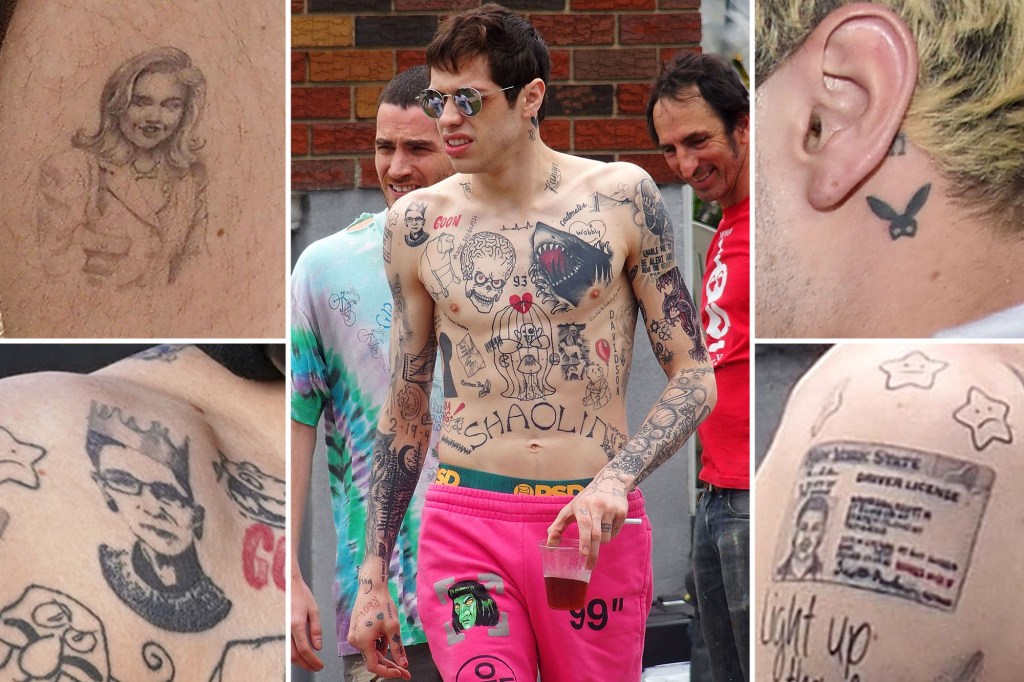 He wears his heart on his (tattoo) sleeve.

Pete Davidson has had “several” tattoos inked across his body in honor of girlfriend Kim Kardashian — despite the fact they’ve only been dating for four months — but she’s not the first lover he boldly etched on his skin.

With references to exes, his late father and his favorite film, the “SNL” star’s tattoos tell his life story — with some chapters being written before the public’s eyes.

Kardashian, 41, revealed the news of multiple tats during an interview with Ellen DeGeneres, saying her favorite of Davidson’s inkings is an inscription that reads: “My girl is a lawyer.” 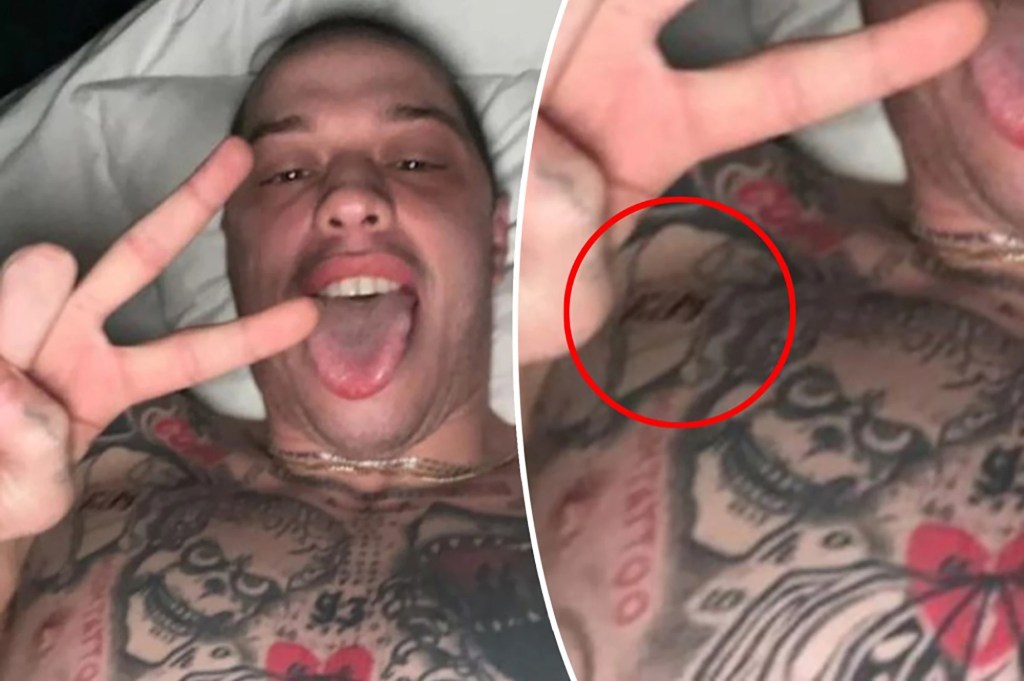 Kardashian confirmed Davidson had her first name branded on his chest. It can be seen in this selfie snapped by the funnyman last week.Instagram 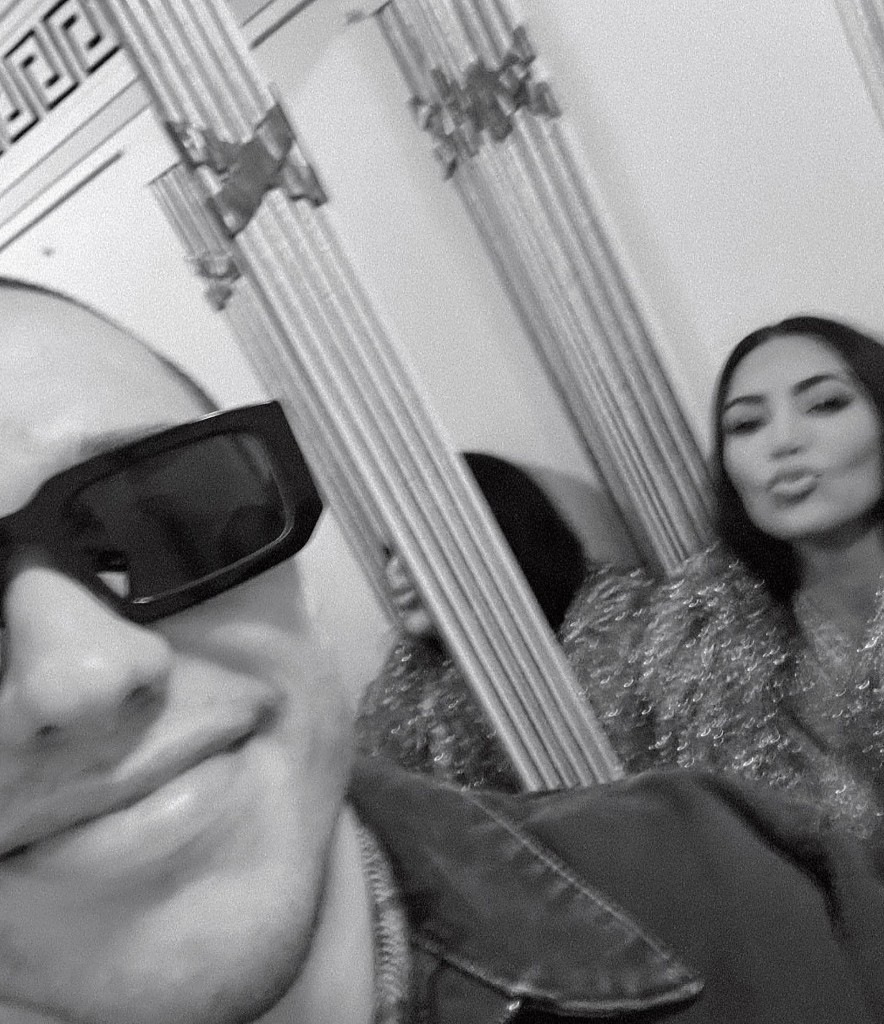 The couple went Instagram official this week after four months of dating. Ink-loving Davidson has already gotten a number of tribute tattoos for his new ladylove. Kim Kardashian/Instagram

She also confirmed her comedian beau, 28, has had the word “KIM” branded across his chest with a hot iron.

“He wanted to do something that was really different [for me],” Kardashian cooed, claiming Davidson told her: “I don’t want to be able to get rid of it or to cover it up, and I just wanted it there as a scar on me.”

Indeed, the funnyman has been getting some of his tattoos removed in recent years — including odes to his former fiancée Ariana Grande.

According to Insider, Davidson had more than 70 tattoos in total before he began getting them burned off by laser in late 2020.

Last July, the “Saturday Night Live” star spoke about removing the body art, saying he hopes to have most of his tattoos removed by the time he turns 30. 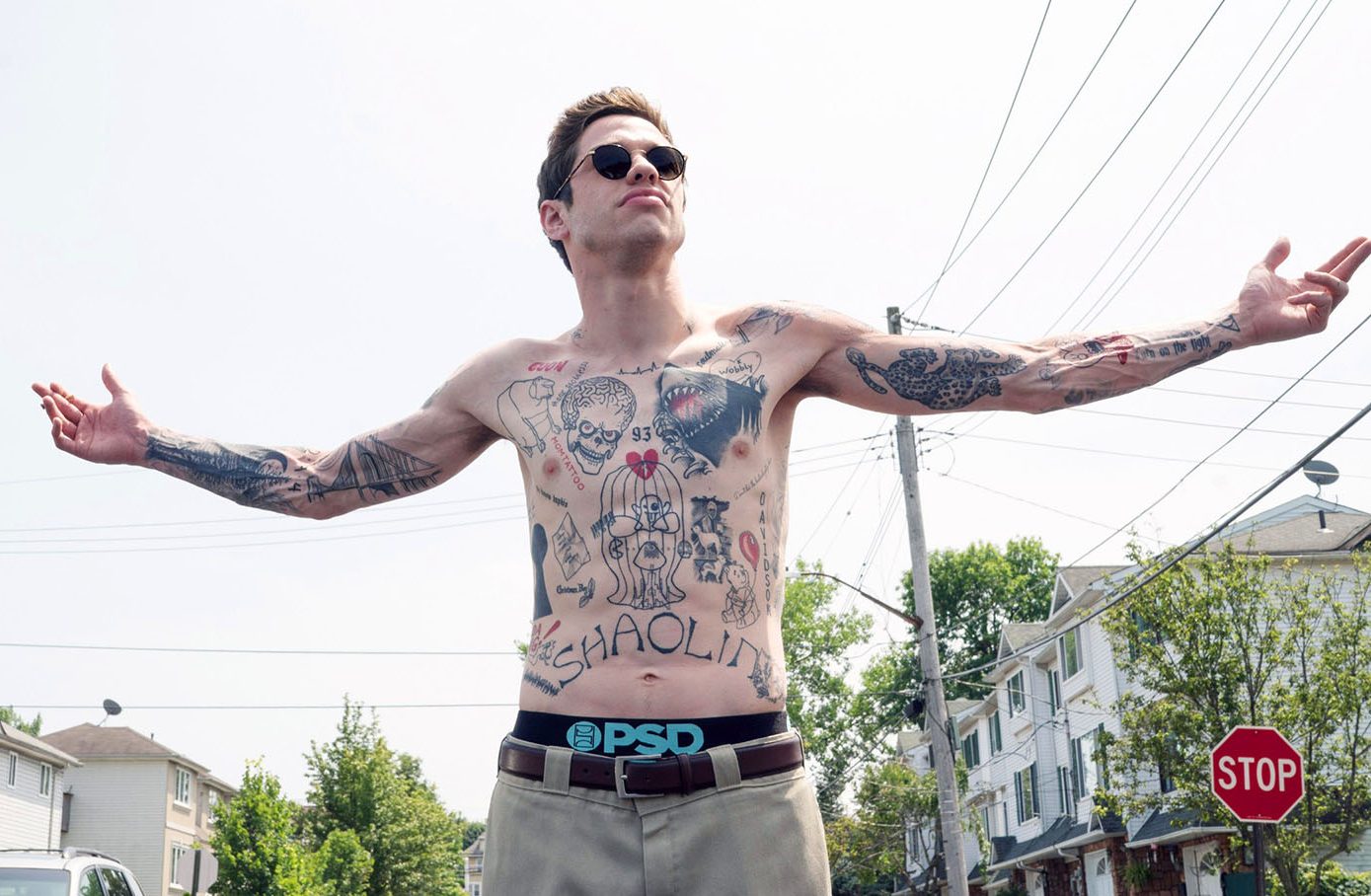 His body is a work of art: A selection of Davidson’s tattoos are seen on display in a shirtless scene from his 2020 film “The King of Staten Island.”

But while dozens of Davidson’s inkings appear completely random, including images of a white unicorn and Winnie the Pooh, many others are extremely sentimental.

Getting inked is an entirely emotional process for the candid comedian, who has struggled with mental health issues. 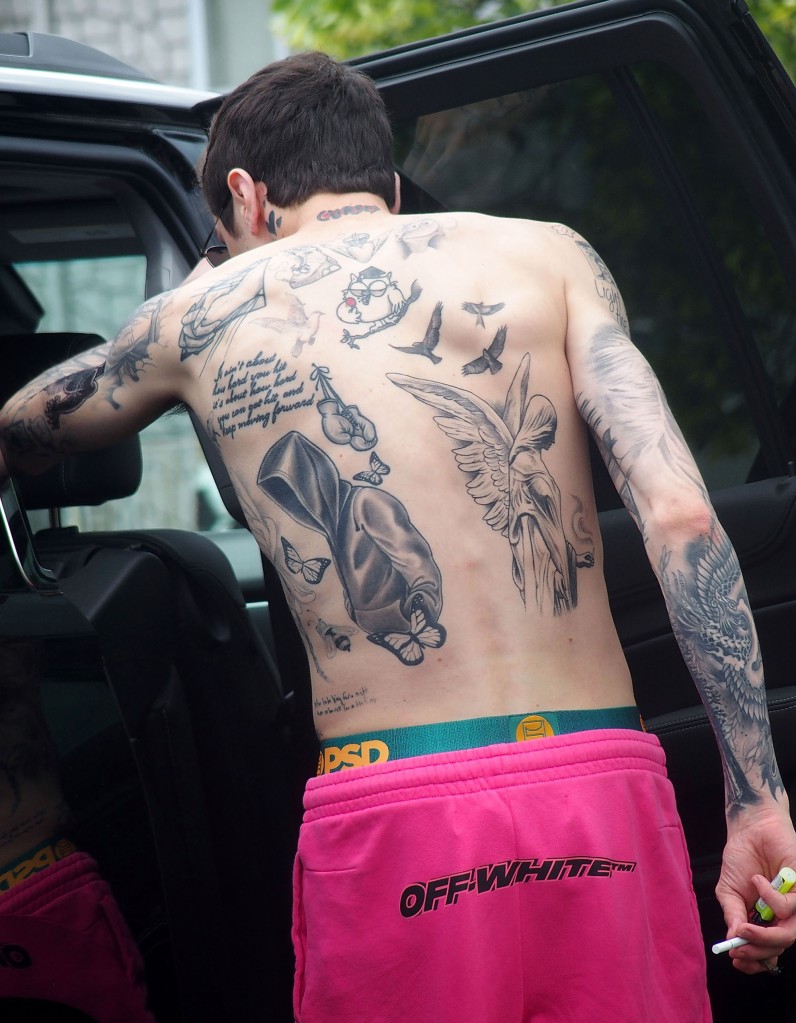 While some of Davidson’s tattoos appear entirely random, others have significant personal meaning for the funnyman. He is pictured in 2019.GC Images

The Staten Island native told Inked magazine back in 2019 that he gets tattoos because “it’s just a release” and a way of stopping self-harm.

“When [I’m] so manic and upset, sometimes that’s the only thing that will work for me,” he declared.

Here are some of Davidson’s most prominent and outlandish inkings that reflect his turbulent and colorful past.

Davidson’s whirlwind romance with Grande began in May 2018, with the pair getting engaged the following month.

Almost immediately, the funnyman headed to the tattoo parlor to have his affection for the pop queen emblazoned on his body.

Grande famously wore distinctive bunny ears on her “Dangerous Woman” album cover, prompting Davidson to have the design tattooed below his left ear. 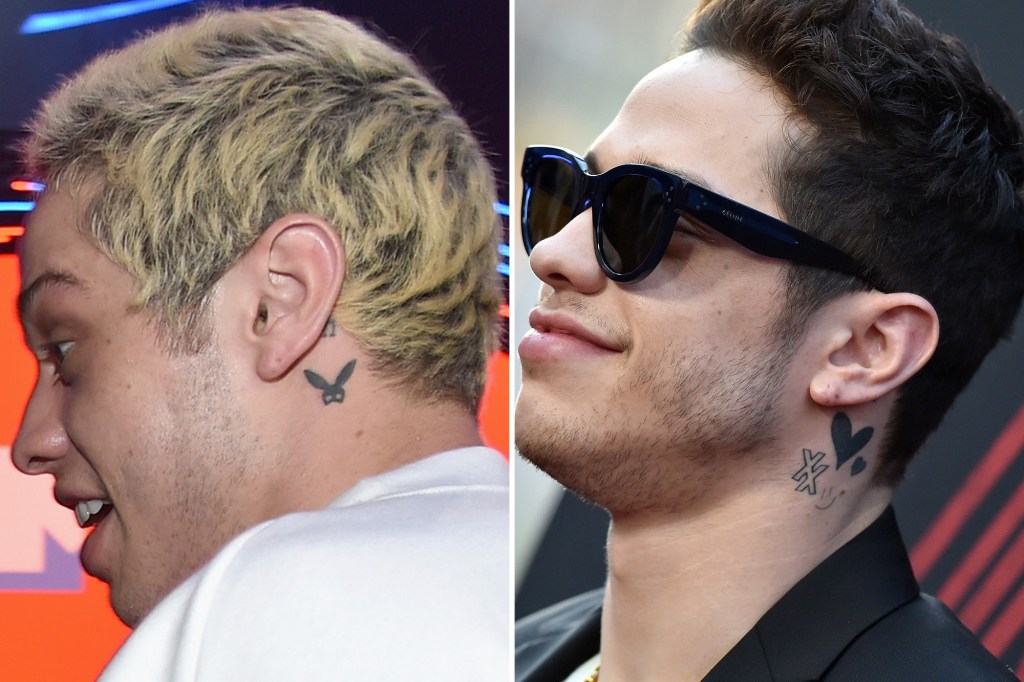 Davidson had Grande’s distinctive bunny ear mask tattooed below his left ear. After their painful and public break-up, he had the tattoo turned into a love heart. FilmMagic

He also decided to have the French phrase “Mille tendresse” — meaning “a thousand tendernesses” — inked across the back of his neck.

Grande herself had the exact same tattoo in the exact same location, with Davidson believing his matching design was a cute way to show his love for the “God Is A Woman” crooner.

But tattoo artists warned Davidson against getting the impulsive ink. 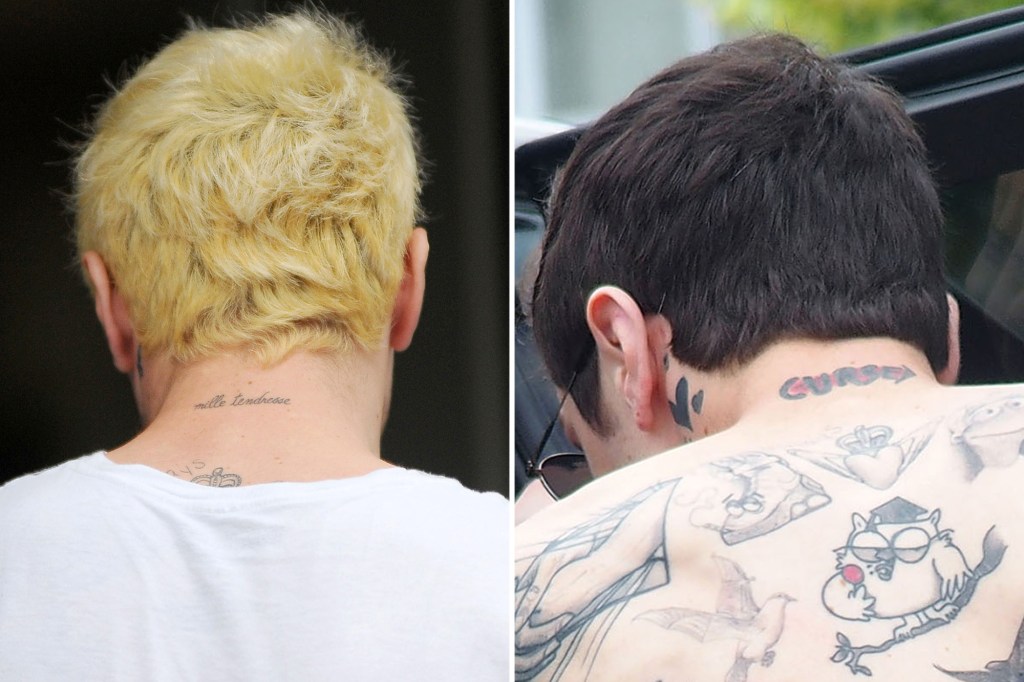 Davidson copied Grande and had the French phrase “Mille tendresse” inked across his neck. After the split, he had the word “CURSED” emblazoned over the top of the tat. GC Images

Mesa later spilled to Page Six: “Relationships come and go, and Pete is a really young man. [But] I think that went in one ear and out the other.”

Indeed, the relationship between Davidson and Grande ended after just three months, with the funnyman forced to cover up the tattoo tributes he had done.

He turned the bunny ears into a love heart, while he poignantly had the word “CURSED” scrawled across the back of his neck to obscure the matching “Mille tendresse” inking he got for Grande.

A tribute to his dad 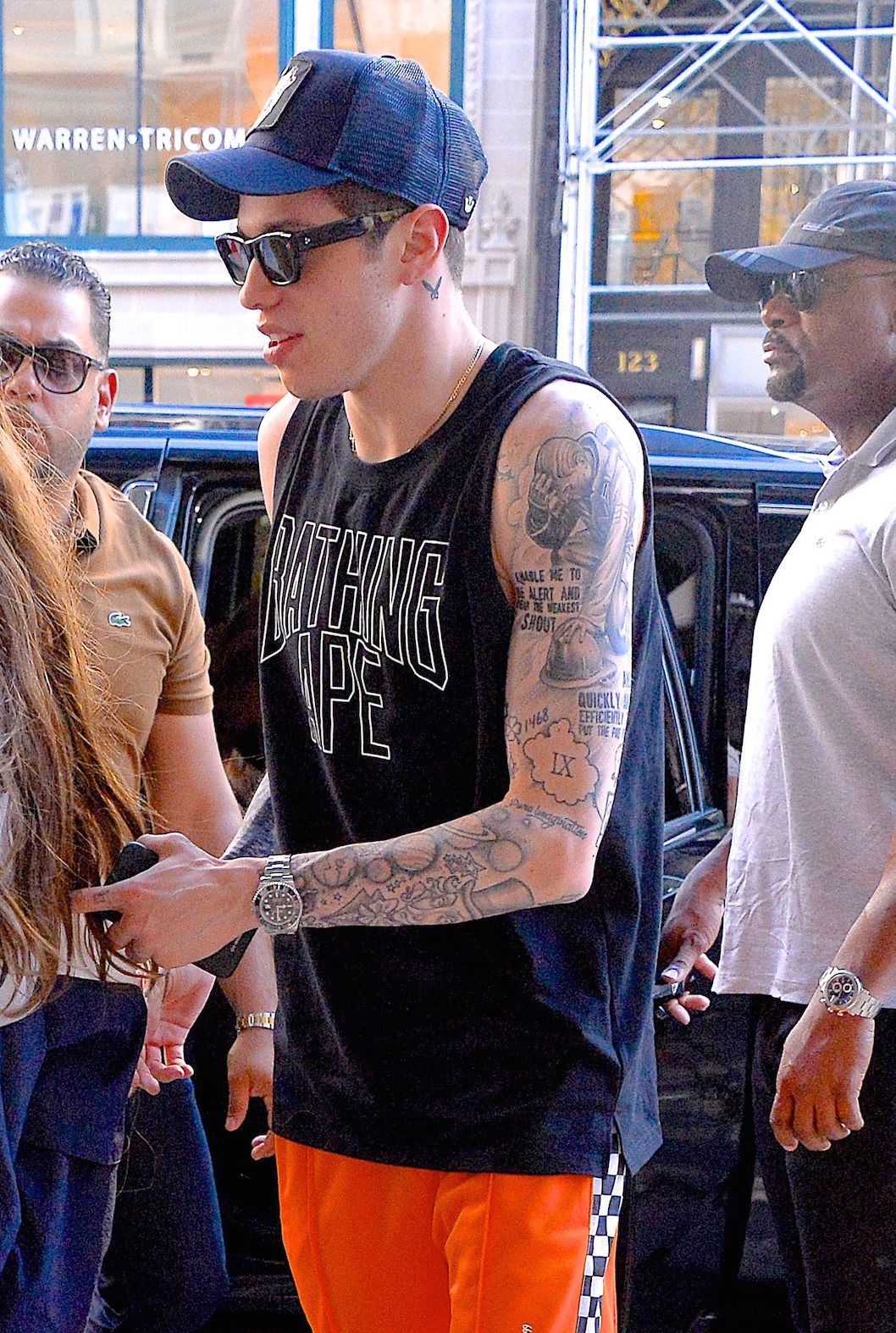 Davidson has a drawing of a firefighter crouched on his knees with his head in his hand — a tribute to his father Scott Davidson, who died on 9/11.

While romantic relationships come and go, Davidson’s admiration for his late fireman father has been unending — so it seems unlikely he’ll laser off a tattoo he had done in his dad’s memory.

On his left bicep, Davidson has a drawing of a firefighter crouched on his knees with his head in his hand — a tribute to his father Scott, who died on 9/11.

Davidson was just seven years old at the time of his dad’s untimely death, and the openly-emotional actor has admitted that his grief spiraled into a depression that affected him for close to two decades. 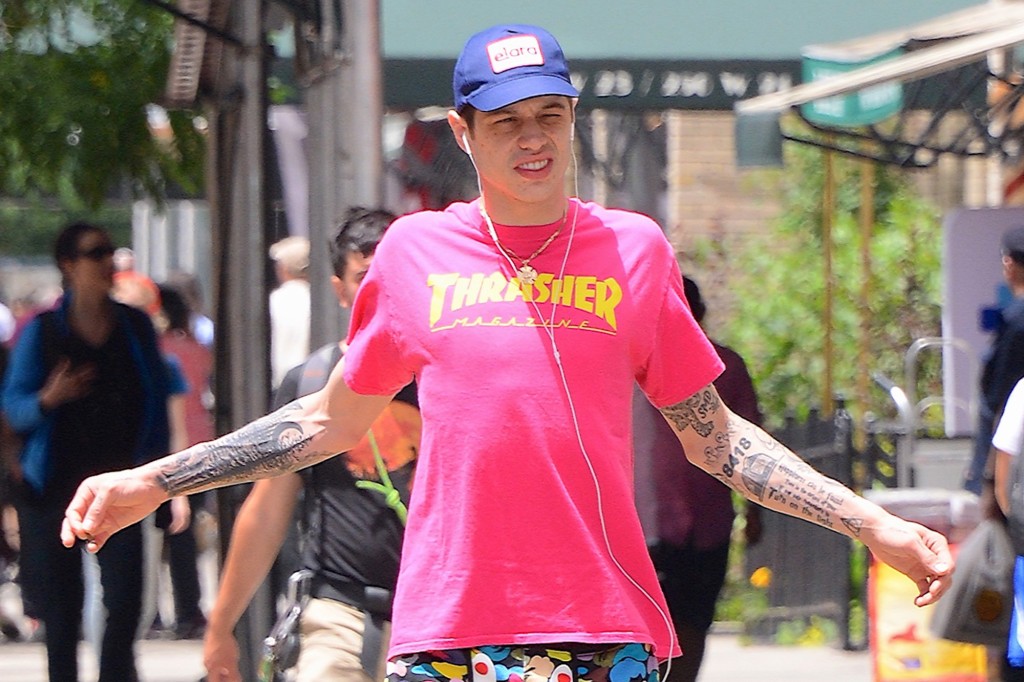 “It was really so hard for him [Peter] to recover, and I would even say that it’s just been recently that he’s finding his way and being okay,” Davidson’s own mom, Amy, said of her son in an interview in 2020.

In addition to the drawing of a firefighter, Davidson also has his father’s badge number “8418” tattooed on his left forearm.

Given Davidson’s battle with anxiety and depression, it’s no surprise he finds solace in inspirational quotes.

Like many Millennials, the comedian grew up reading Harry Potter and has a quote from Albus Dumbledore inked on just below his dad’s firefighting badge number.

The quote, which comes from “Harry Potter and the Prison of Azkaban” reads: “Happiness can be found, even in the darkest of times, if one only remembers to turn on the light.” 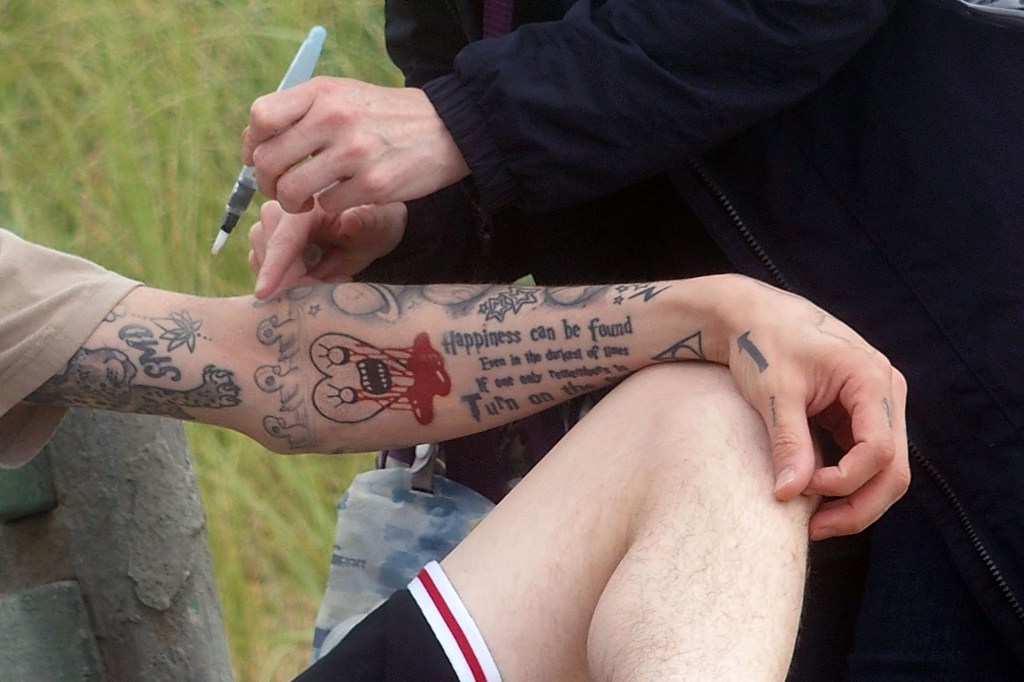 Like many Millennials, the comedian grew up reading Harry Potter and has a quote from Albus Dumbledore inked on his just below his dad’s firefighting badge number.GC Images

Meanwhile, on his back, Davidson has a quote inked in cursive from one of his favorite films — “Rocky.”

On his left bicep, Davidson has another motivational phase which also doubles as a tribute to his dad. 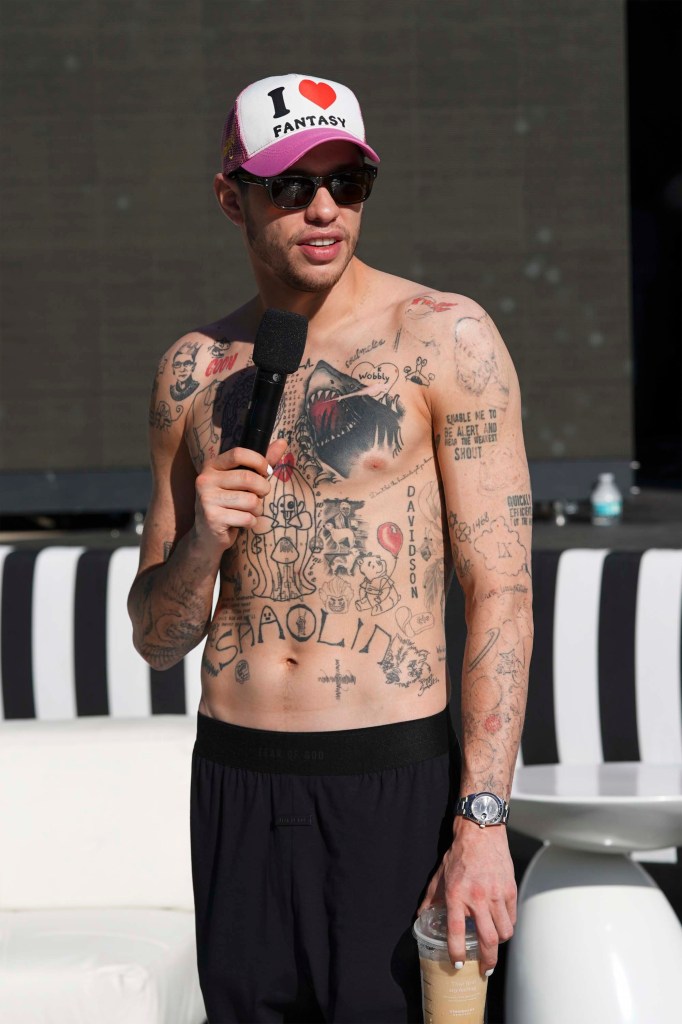 His left shoulder has another quote in honor of his dad.NBC

The quote, “Enable me to be alert and hear the weakest shout,” comes from “The Fireman’s Prayer” — a manifesto for those who work in the profession.

But while Davidson may have literary quotes across his frame, he memorably had far more random phrases tattooed near his left nipple.

In a 2018 shirtless GQ photoshoot, the actor could be seen sporting the inking, which stated: “Jokes come and go, but swag is forever.”

The inking didn’t last long, and he soon had an image of a shark tattooed over the top.

Meanwhile, the shark isn’t the only animal seen on Davidson’s frame. The actor appears to house an entire zoo on his pale skin, with a leopard, a crab, a pig named “Piggie Smalls” and a drawing of Winnie the Pooh all etched onto his flesh.

Davidson stunned fans back in 2017 when he debuted a leg tattoo of failed Democratic presidential nominee Hillary Clinton.

The image — which appeared to have been copied from a 90s-era photograph of the former First Lady — even prompted a reaction from Clinton herself. 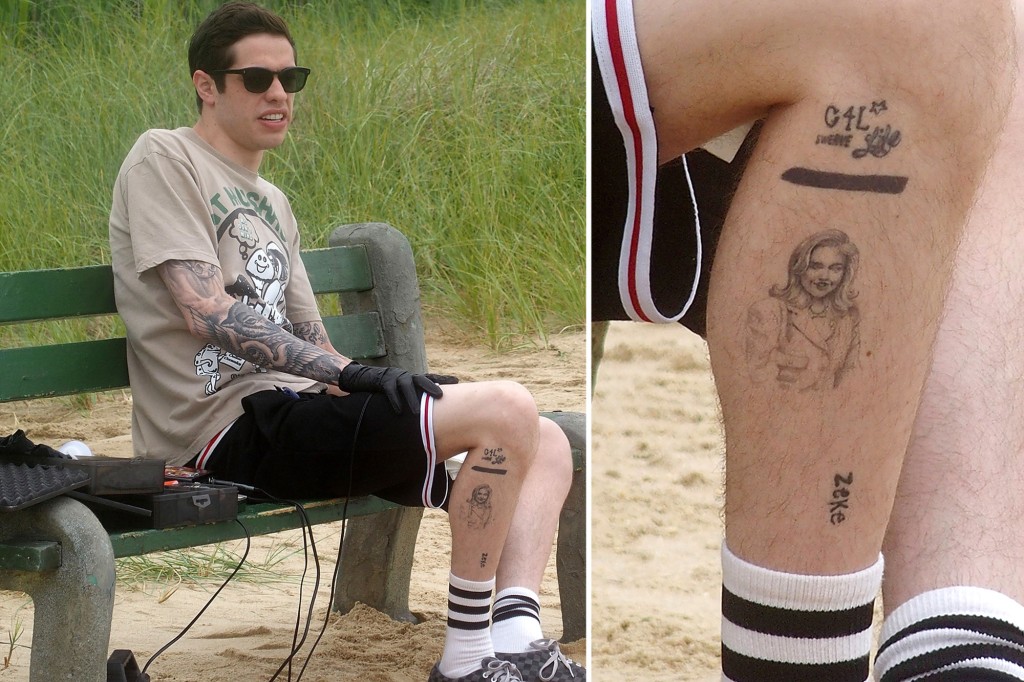 He’s with her! Davidson stunned fans back in 2017 when he debuted a leg tattoo of failed Democratic presidential nominee Hillary Clinton. GC Images

After Davidson uploaded a photo of the body art to his now-defunct Instagram page, Clinton responded: “Thanks, @petedavidson. This makes it significantly less awkward that I’ve had a Pete Davidson tattoo for years.”

However, Clinton isn’t the only female icon that the funnyman has on his frame.

Eager to flaunt his feminist credentials, Davidson also has an inking of the late Supreme Court Justice Ruth Bader Ginsburg on his right shoulder. 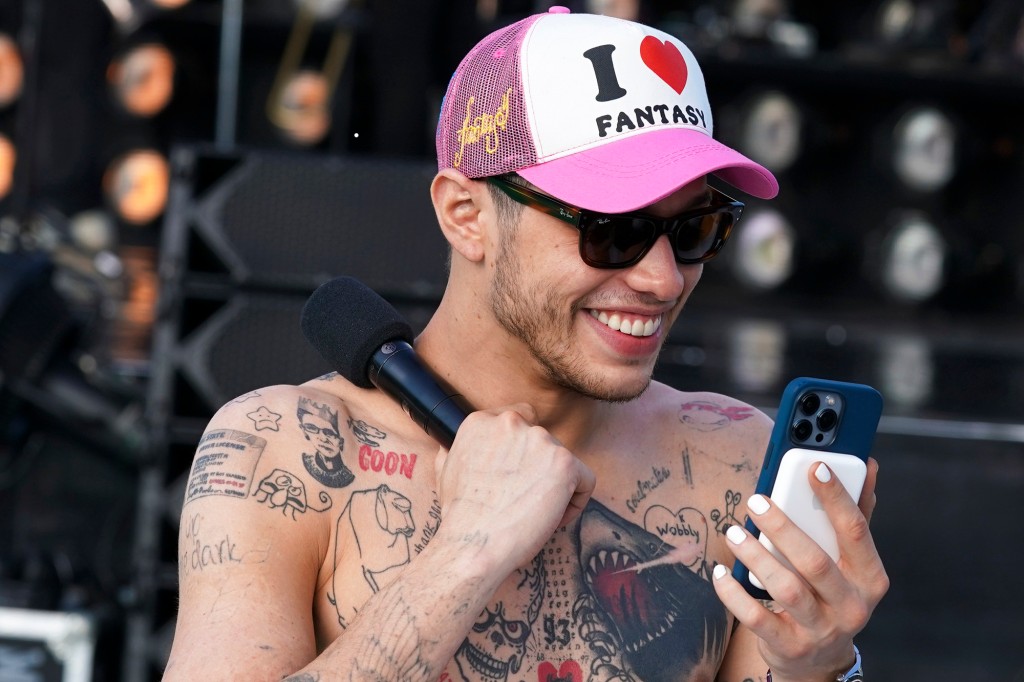 Davidson also has an inking of the late Supreme Court Justice Ruth Bader Ginsburg on his right shoulder.NBCU Photo Bank via Getty Images

The legal eagle is seen sporting a crown atop her head in the tattoo, with the image seemingly inspired by the “Notorious RBG” drawing originally created by Shana Knizhnik.