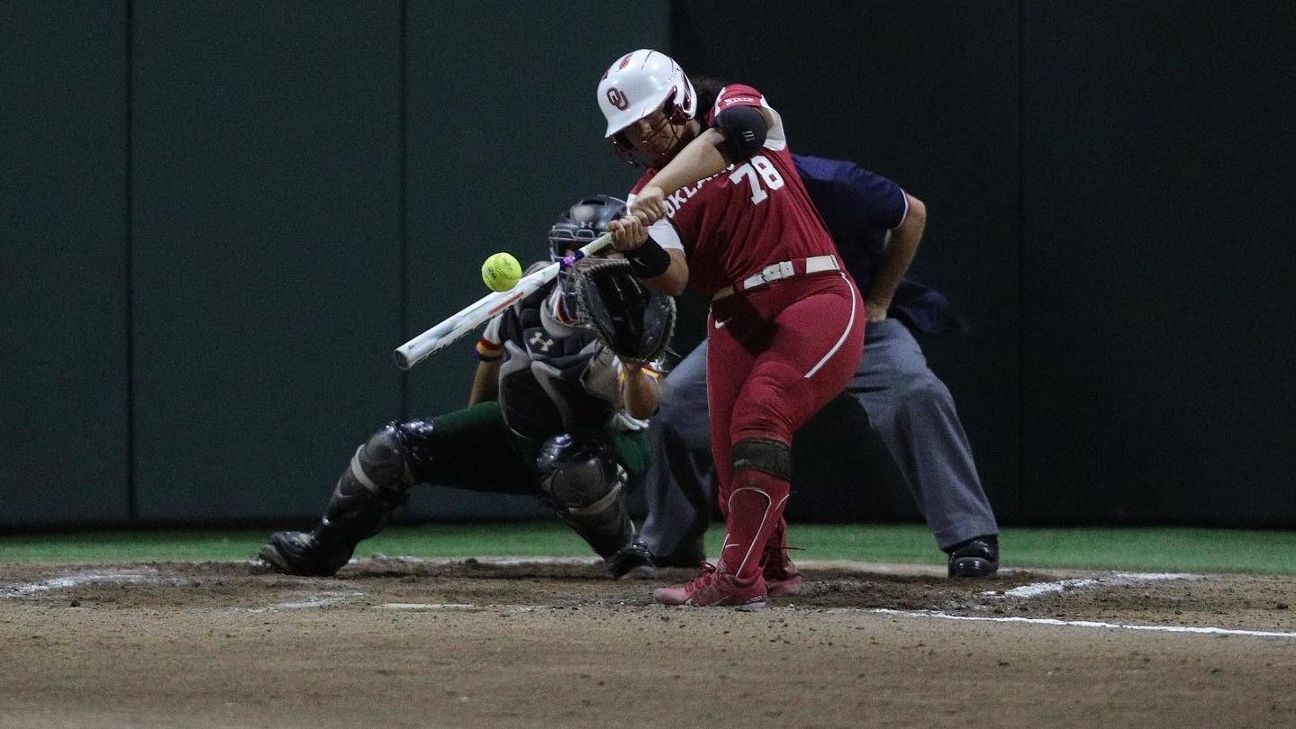 Alo’s record-breaking homer came in the sixth inning of the undefeated and top-ranked Sooners’ game against the host University of Hawai’i in Oklahoma’s third matchup of the Rainbow Wahine Classic.

Alo — whose full name is Jocelyn Aloha Pumehana Alo — grew up about 30 miles north of the Hawaii campus, in the small village of Hauula, and about two dozen family members were part of the overflow crowd on hand to watch her set the record.

The homer, a two-run shot that put the Sooners up 9-0, came on a 2-1 pitch from Hawai’i senior right-hander Ashley Murphy, who entered the game having thrown just 2⅓ innings this season. She threw a curveball up and out over the plate, and Alo crushed it 40 feet above the 200-foot sign in right-center field.

Alo bounded out of the batter’s box, sure of the ball’s final destination, and ran around the bases throwing the shaka hand gesture and pointing to her family in the crowd. Her teammates mobbed her at the plate, and she later came out of the dugout for a curtain call, a lei around her neck. Her reaction was equal parts exuberance and relief.

Since tying the record, Alo’s quest had been stymied for eight games as nearly every opposing pitcher refused to give her anything she could drive. In those eight games, Alo walked 18 times and was hit by a pitch, bringing her on-base percentage to an NCAA-best .667. The eight games without a homer tied the second-longest such stretch of her career.

Although Alo never showed frustration as opponent after opponent pitched around her, the strategy caused consternation among the Sooners, mostly because it seemed to serve no purpose other than to keep Alo from the record. Oklahoma, the No. 1 team in the country with the best offense, is 18-0 on the season and won six of those eight games by run rule.

When Alo was intentionally walked in the third inning against Cal on Friday afternoon, the crowd — which included the softball team from Alo’s high school — reacted with anger and disbelief. When the inning ended, Oklahoma coach Patty Gasso came out of the Sooners’ dugout and had what appeared to be a friendly but pointed conversation with Cal coach Chelsea Spencer.

Alo broke the record of another Sooner, Lauren Chamberlain, who expressed unwavering support for Alo throughout her chase for the record.

“I just care so much for her as a person that I can’t help but root for her,” she said. “It’s not like it’s being broken every year. I had it for seven years, and I’ve enjoyed every minute of it. I’ve gotten a lot out of it, and now Jocelyn deserves it.”

Alo, a redshirt “super” senior who took advantage of the extra season granted because of COVID-19, nonetheless hit her 95th home run in 215 games, five fewer than Chamberlain, and fewer games than any of the others in the top 10 in career homers. She had to wait until game 223 to hit her 96th.

“Honestly I wish I could have done it sooner so I could get this over with,” Alo said after Oklahoma defeated Baylor on Thursday. “But I’m definitely trying to cherish this, and it’s even better that I get to do it in front of my home state.”

Next post Guide to Credit Card Processing Costs and Fees