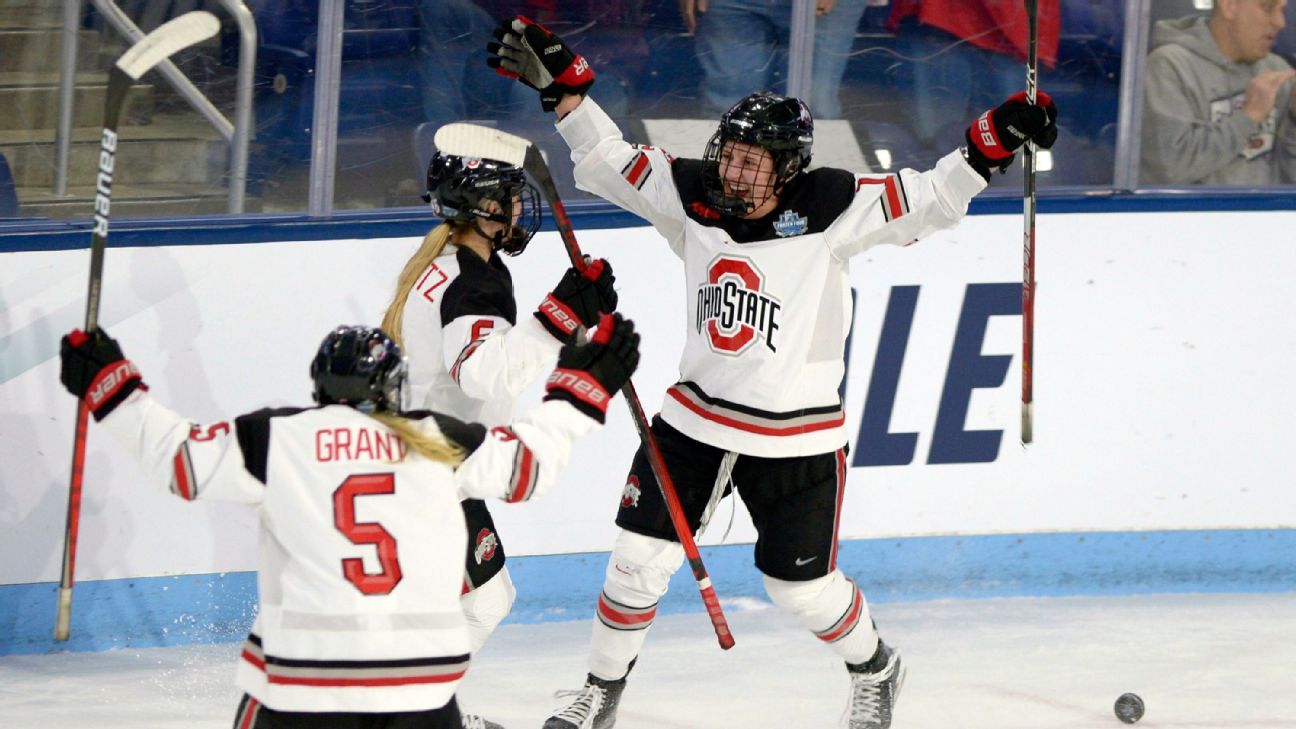 The women’s Frozen Four national championship game is set, with No. 1 Ohio State taking on Minnesota-Duluth on Sunday at 4 p.m. ET.

UMD upset No. 3 Northeastern in Friday’s first semifinal, downing the Huskies 2-1 in double-overtime. Junior Naomi Rogge scored the game winner for the Bulldogs at the 18:15 mark of the second overtime frame. Emma Soderberg made 46 saves in net to secure the victory.

Ohio State took down No. 5 Yale 2-1 in Friday’s second semifinal, which was delayed over an hour by the Minnesota-Duluth vs. Northeastern game going to double-overtime. The Buckeyes had never earned the top seed in the tournament and have now advanced to the program’s first national championship game.

Friday was the first-ever Frozen Four appearance for Yale, following a 2-1 overtime victory against No. 4 Colgate in the quarterfinals.

After a scoreless first period between Ohio State and Yale, the teams traded goals in the second. Bulldogs defender Tabea Botthof made it 1-0, followed shortly by Ohio State’s Paetyn Levin tying the game. Buckeyes winger Jennifer Gardiner made it 2-1 from there. The junior forward had four game-winning goals for Ohio State in the regular season.

The Buckeyes ranked No. 1 in offense this season, averaging 4.7 goals per game. Yale’s defense had been its bread and butter, averaging a second-best 1.51 goals-against average.

Friday’s first semifinal marked the second time UMD had toppled a higher-seed program in this year’s bracket. UMD previously defeated Harvard 4-0 in the tournament’s first round, and pulled the upset over No. 2 Minnesota with a 2-1 quarterfinal victory to reach the semis.

Minnesota-Duluth heads to its first title game appearance since 2010.

The matchup between UMD and Northeastern was familiar for both sides. They faced each other in last season’s semifinal, and that game required overtime as well. It was Northeastern coming out on top then, and the Huskies were in control of this year’s game early on as well.

Northeastern’s freshman winger Skylar Irving opened scoring in the second period, putting the Huskies up on a rebound chance offered by Aerin Frankel. That was Irving’s second of the tournament, after she potted one against Wisconsin in the quarters.

That goal stood until midway through the third period, when the Huskies struggled to clear the zone and UMD senior forward Taylor Anderson capitalized to tie the game at 1.

From there, it was all about the goaltending. Frankel made a key stop on UMD’s Gabby Hughes with seconds remaining in the first overtime to get the Huskies through, and Soderberg was excellent again holding down the Bulldogs’ crease on their run to the national championship.