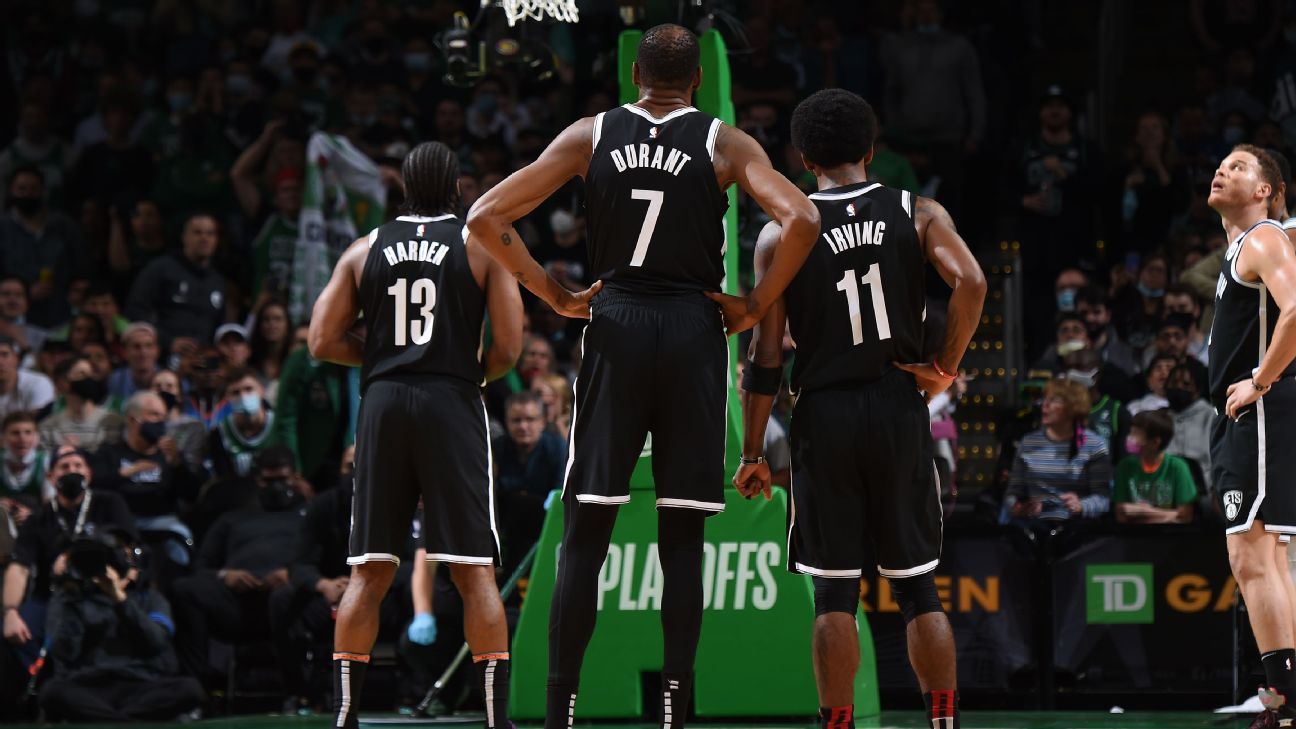 When you’re putting together a championship contender, one rule is paramount — get the best talent you possibly can. You’ll be facing off against the best possible rosters your opponents can assemble, so it’s only logical that you should pack your own team full of stars. Sometimes, the stars align and you can even stack your roster with multiple Hall of Famers, thereby guaranteeing you a title.

Well, not quite. That’s what the Brooklyn Nets likely had in mind when they acquired Kevin Durant and Kyrie Irving in 2019, and then added James Harden in the latter part of the 2021 season. That’s three superstars, all of whom are likely bound for Springfield, Massachusetts, when they retire, and all of whom can take over games. Who could stop them? A lot of things, as it turns out — between injuries and off-court factors, the trio played only 16 games together (going 13-3, to be fair) before Harden was sent to the Philadelphia 76ers in a trade. The Nets were swept in the playoffs, and now Durant has requested a trade, while Irving’s future with the team is in flux.

If it makes Nets fans feel any better, it’s not even close to the first time a superteam has failed to win a title. Here are a few examples from the major men’s pro leagues since the turn of the century.

Kobe Bryant and Shaquille O’Neal alone were a combination to be feared, but the Lakers decided to add Karl Malone and Gary Payton to further overwhelm other teams. It wasn’t a bad idea — the team finished first in the Pacific Division and third overall in the Western Conference and cruised through the playoffs, going 12-5 in the first three rounds. Unfortunately, the Lakers met up with a defensive juggernaut in the Detroit Pistons and lost 4-1 in the NBA Finals. Payton would be traded to the Boston Celtics and Malone would retire, making this superteam one-and-done.

Take Tom Brady, in all likelihood the greatest quarterback in NFL history. Pair him with Randy Moss, one of the top five wide receivers of all time. Then have a team full of names like Wes Welker, Rodney Harrison, Richard Seymour, Junior Seau, Vince Wilfork and Asante Samuel. The result? A 16-0 record, only the second time a team has gone undefeated in the regular season in NFL history. Unfortunately for this team, its final record has a one in the loss column, as Eli Manning and the New York Giants beat the Patriots in one of the most thrilling Super Bowls of all time.

The modern Nets, of course, are not the first instance of Durant and Harden being on a team that didn’t quite make it. That dubious honor belongs to the Thunder, who shortly after moving to Oklahoma City drafted Harden to play alongside Durant and Russell Westbrook. The trio immediately began to dominate, and the Thunder improved every year until they made the NBA Finals in 2011-12. That series started off well, with the Thunder defeating the Heat at home in Game 1, but they lost four in a row after that. Harden was traded in the offseason after the team was unable to sign him to an extension.

One pitching ace is pretty great, but what happens when you have four? The Phillies were rocking a rotation of Roy Halladay, Cliff Lee, Roy Oswalt and Cole Hamels, not to mention Ryan Howard and Chase Utley and Jimmy Rollins in the lineup. That’s good for 102 wins and a league-lowest 529 runs allowed. They faced off against the St. Louis Cardinals in the division series, and while they ran out to a 2-1 lead in the first three games, St. Louis rallied back to force a Game 5. Skip Schumacher knocked in a run in the first inning against Halladay, and Chris Carpenter pitched a three-hit shutout. The Cardinals would end up winning the World Series.

One of the most exciting teams in NBA history, the Lob City Clippers looked to use their high-flying style of basketball to bring a non-Lakers title to Los Angeles. The acquisition of Chris Paul meant that Blake Griffin and DeAndre Jordan would have plenty of alley-oop opportunities — just ask poor Brandon Knight after Jordan threw down an all-time poster dunk on him. The Clippers were a very good team during Paul’s tenure, but fell apart in the playoffs — Lob City never advanced past the semifinals.

Previous post Victoria Beckham: I was forced to weigh myself on live TV after giving birth

Next post Tips for Choosing the Right Newborn Photographer