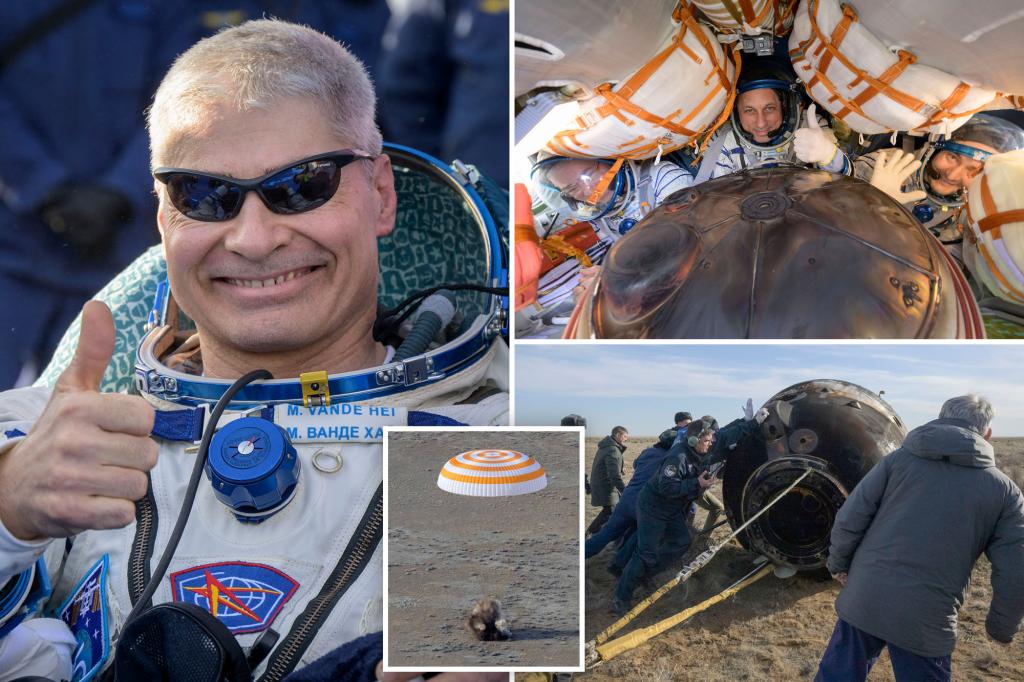 The trio landed in a Soyuz MS-19 spacecraft amid escalating tensions between the US and Russia over the war in Ukraine, but NASA confirmed earlier this month the retired US Army colonel would be able to hitch a ride back to Earth in the Russian capsule.

“Beautiful out here,” Vande Hei said after being the last one out of the spacecraft.

A team of NASA doctors and staffers were at the site and planned to take Vande Hei to Houston after his year in space. He and Dubrov launched last April, with Shkaplerov joining them at the ISS in October.

Vande Hei’s 355 days is the longest spaceflight by a US astronaut, eclipsing the previous mark of 340 set by Mark Kelly in 2013. Dubrov also spent 355 days aboard the ISS. 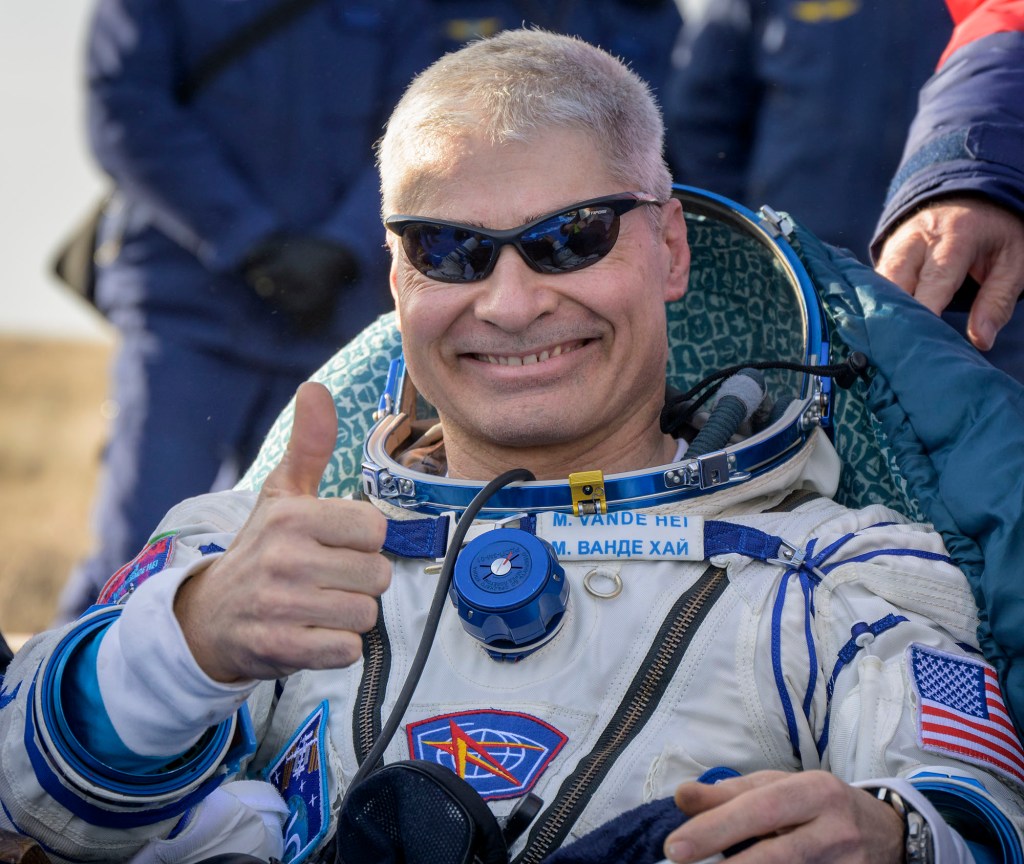 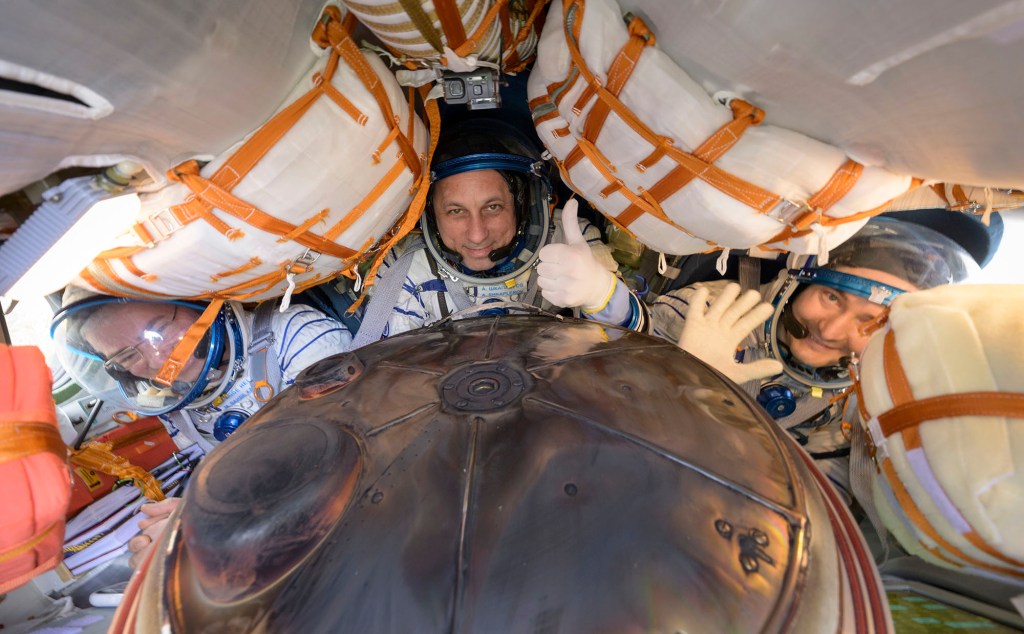 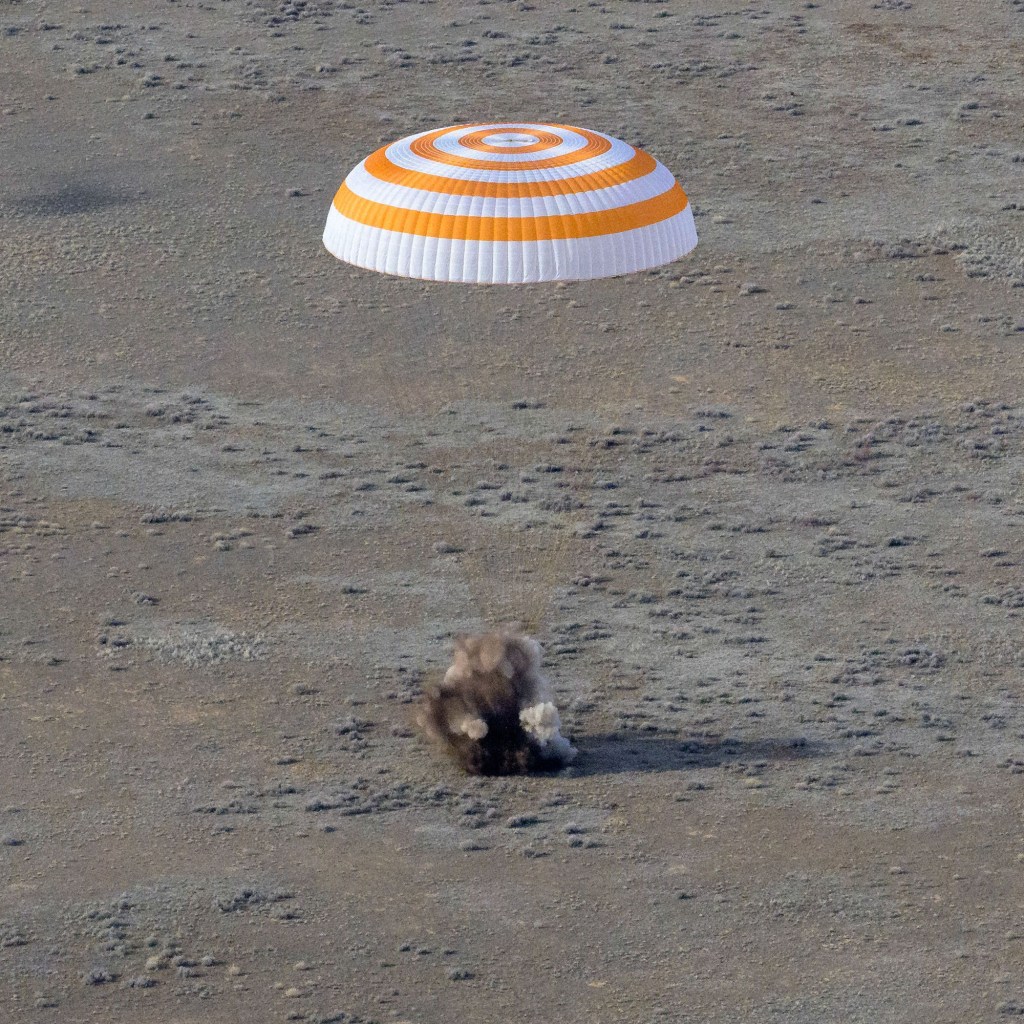 The trio landed in a Soyuz MS-19 spacecraft amid escalating tensions between the US and Russia over the war in Ukraine.Bill Ingalls/NASA/AFP via Getty Images 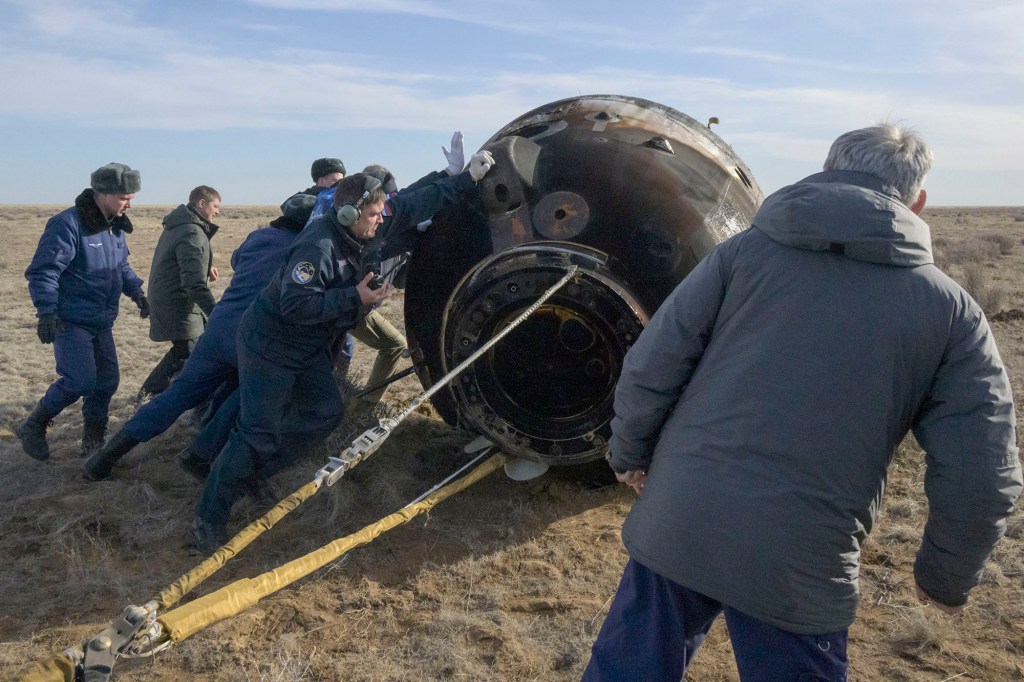 The Soyuz MS-19 spacecraft landed in a remote area near the town of Zhezkazgan, Kazakhstan.Bill Ingalls/NASA via AP

Vande Hei said he avoided the topic of Russia and Ukraine while in space with his counterparts even before the Feb. 24 invasion.

“I’m not sure we really want to go there,” he said.

Shkaplerov, for his part, said Tuesday the trio didn’t have any issues, Space.com reported. 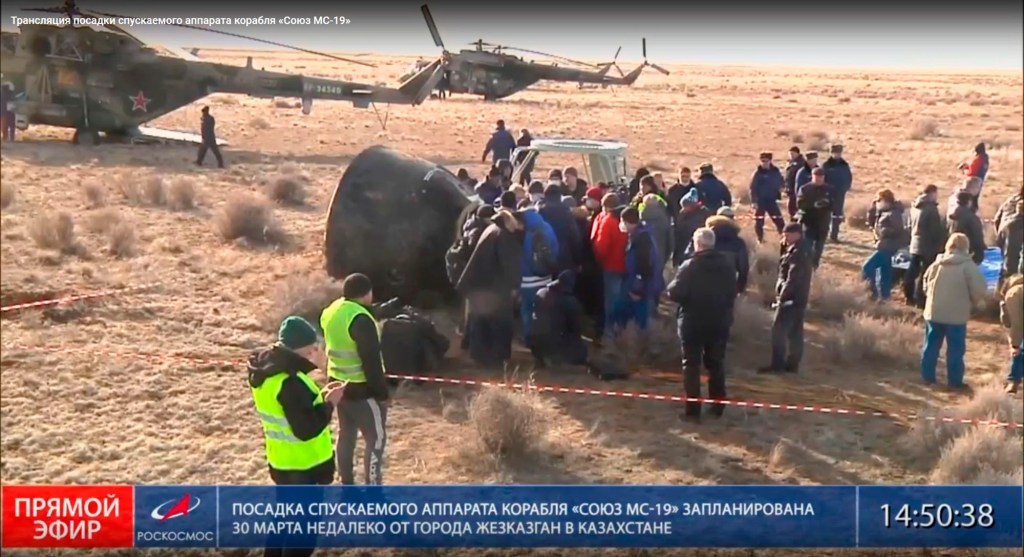 A team of NASA doctors and staffers were at the site and planned to take Mark Vande Hei to Houston after his year in space.Roscosmos/EPA 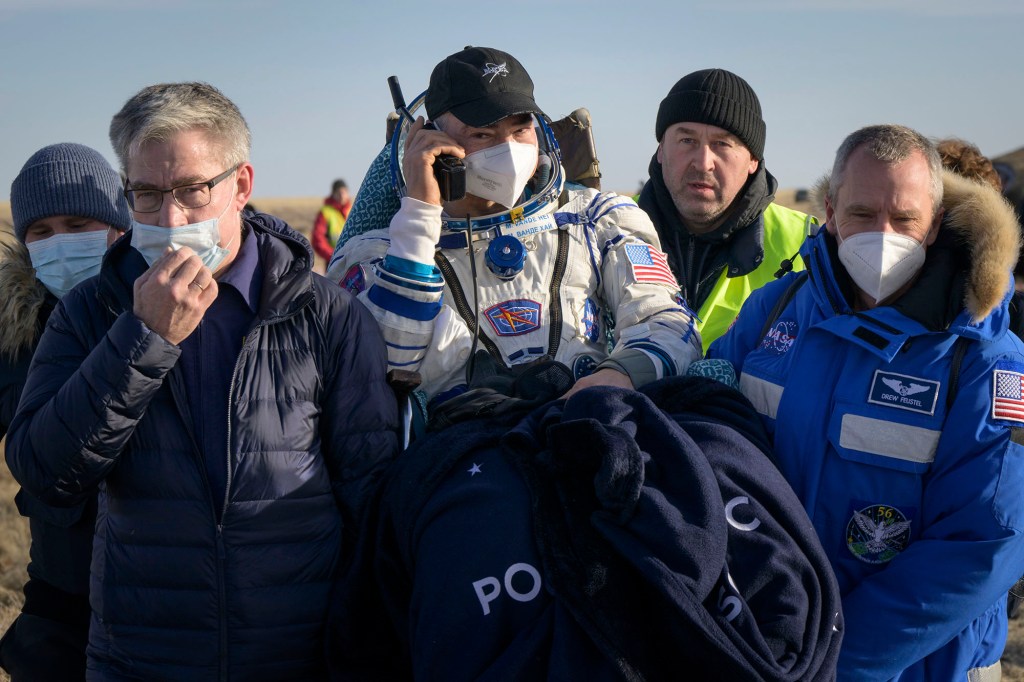 “Beautiful out here,” Mark Vande Hei said after being the last one out of the spacecraft.Bill Ingalls/NASA via AP 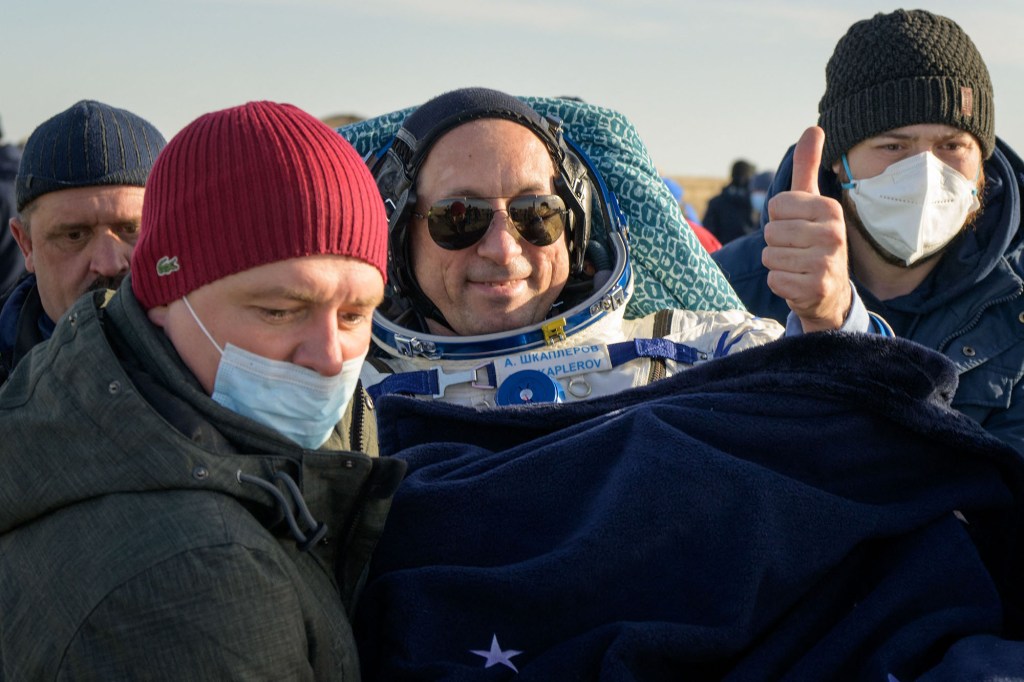 “On orbit we are one crew,” Russian cosmonaut Anton Shkaplerov said about the tensions surrounding the war in Ukraine.Bill Ingalls/NASA/AFP via Getty Images 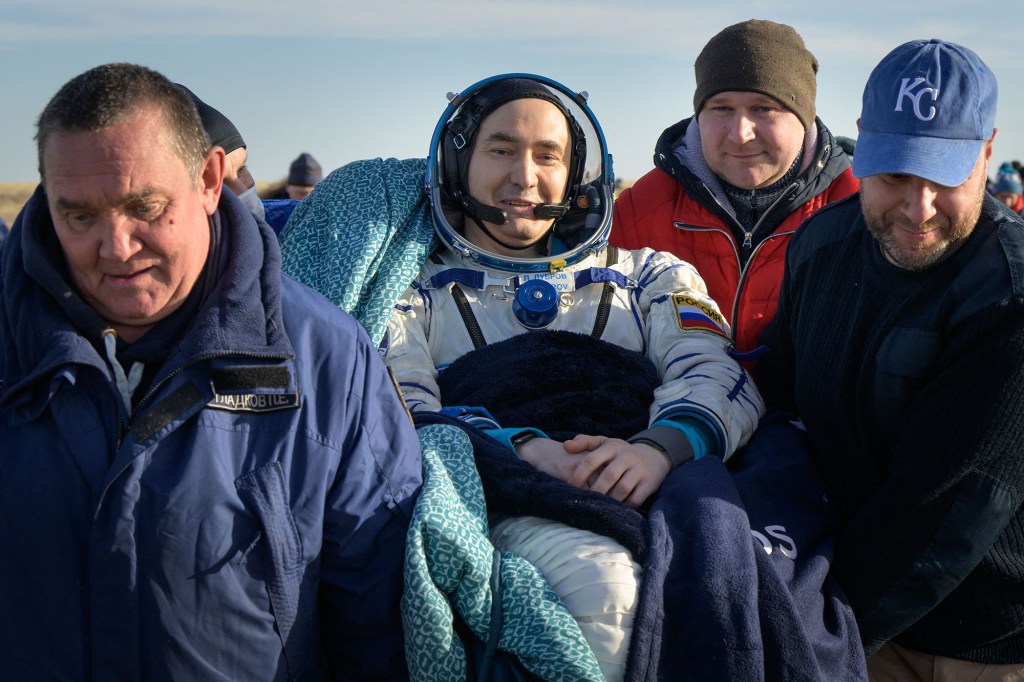 “People have problems on Earth,” Shkaplerov said while formally shifting command of the space station to NASA astronaut Thomas Marshburn. “On orbit we are one crew. I think ISS is a symbol of the friendship and cooperation, like symbol of the future exploration of space.”

Altogether, Vande Hei has spent 523 days in space as a NASA astronaut and traveled more than 150 million miles in his record-setting jaunt — the equivalent of 312 trips to the moon and back. He also circled the planet roughly 5,680 times.

While at the ISS, he focused on scientific research, including on plants and in physical sciences, NASA said.

“Mark’s mission is not only record-breaking, but also paving the way for future human explorers on the moon, Mars, and beyond,” NASA Administrator Bill Nelson said in a statement. “NASA and the nation are proud to welcome Mark home and grateful for his incredible contributions throughout his year-long stay on the International Space Station.”

Vande Hei, meanwhile, vowed to “get outside as much as possible” in a video posted from the ISS earlier this month.

“I’ve had an indoor job 24/7 for almost a year,” Vande Hei said. “So I’m looking forward to being outside no matter what kind of weather.”

The all-time record for consecutive days in space belongs to Russian cosmonaut Valery Polyakov, who spent 438 straight days during a mission from January 1994 to March 1995.