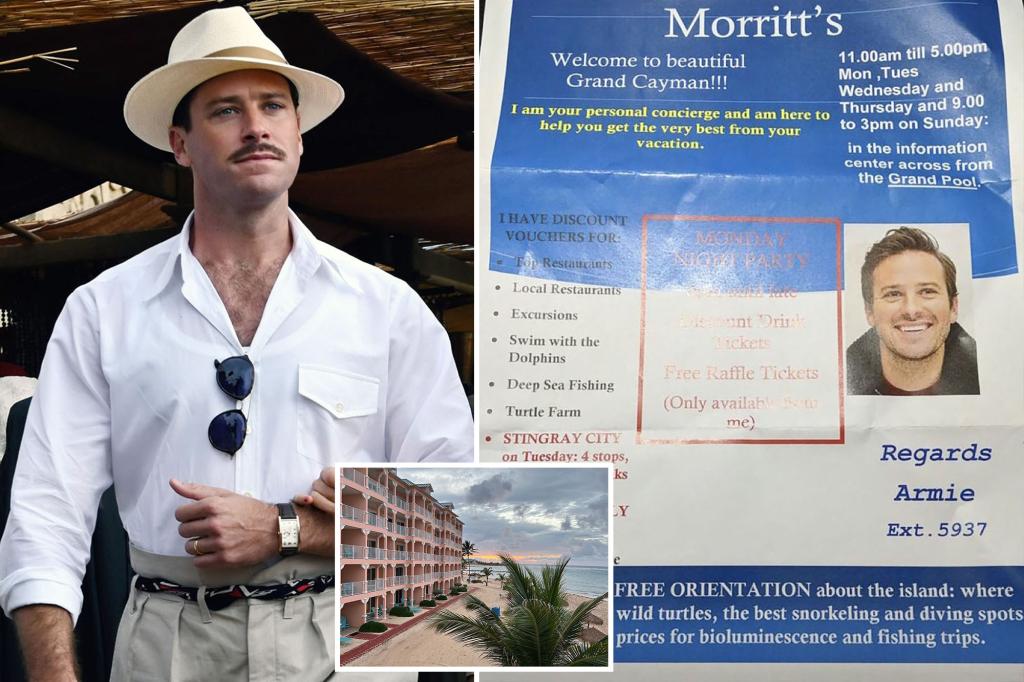 From Hollywood to hotel concierge?

Mystery still surrounds claims disgraced actor Armie Hammer is working at a ritzy resort in the Cayman Islands — despite denial from his lawyer.

The “Call Me By Your Name” actor, who is reportedly residing in the Caribbean after being banished from Tinseltown amid sexual assault and cannibalism allegations, was first rumored to have been hired by Morritt’s Resort earlier this week.

On Wednesday, TV producer Muna Mire took to Twitter to share a photo of a Morritt’s flier that featured Hammer’s face and the words: “I am your personal concierge and am here to help you get the very best from your vacation. Regards, Armie.”

“My friend’s parents went on vacation in the Cayman Islands and Armie Hammer was their concierge. I’m still not over it,” Muna tweeted above the image of the flier.

The tweet subsequently went viral before being mysteriously deleted.

The Post has reached out to both Hammer’s lawyer and the hotel. 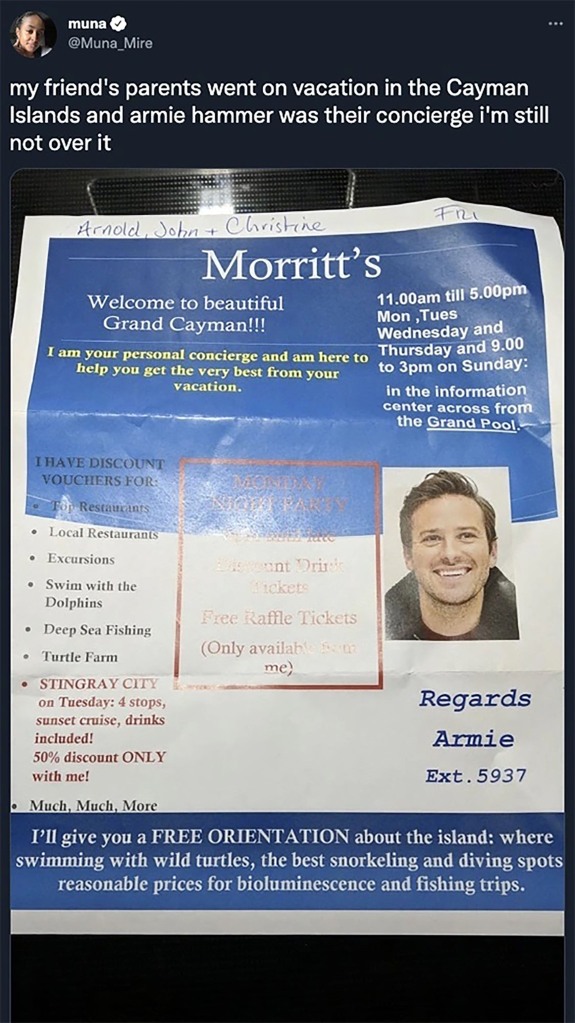 On Wednesday, TV producer Muna Mire took to Twitter to share a photo of a Morritt’s flier that featured Hammer’s face and read: “I am your personal concierge and am here to help you get the very best from your vacation. Regards, Armie.”

Hammer’s lawyer, Andrew Brettler, quickly attempted to shut down rumors his client had gone from superstar to service worker, telling Variety that they were untrue.

The publication also reportedly spoke to a longtime Morritt’s employee, who confessed to creating the fake flier as a prank.

The staffer — who has worked at the resort for 12 years — said he sent the pamphlet to a few rooms for fun. 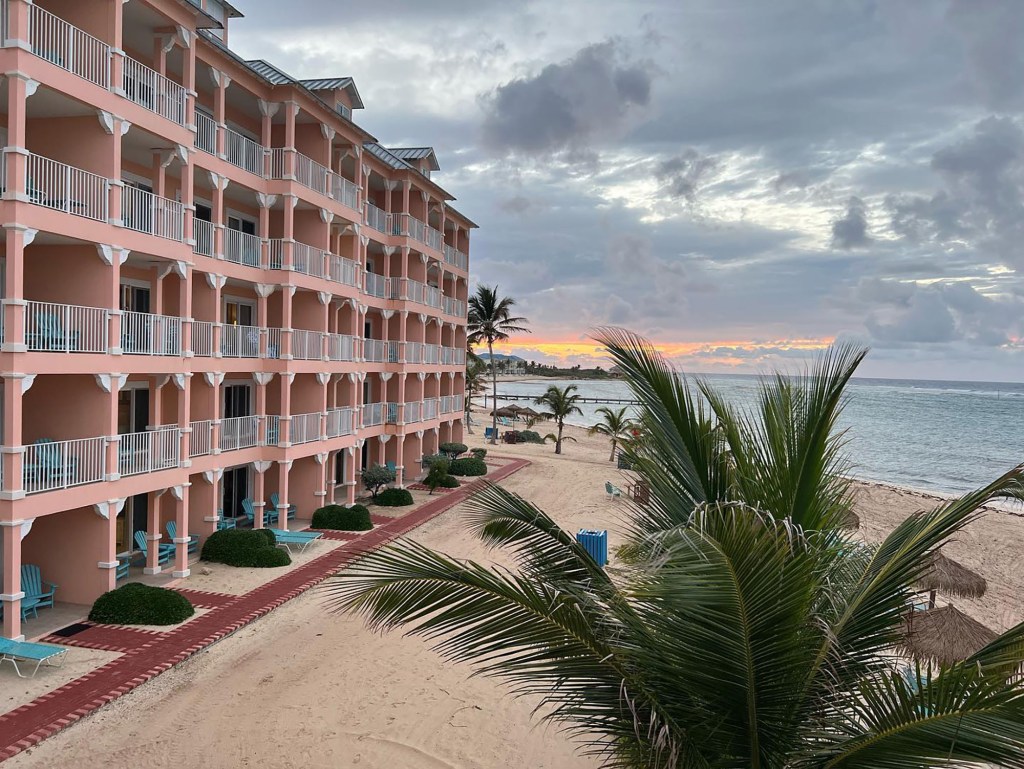 Hammer has been spotted multiple times at the Cayman Islands resort (pictured). 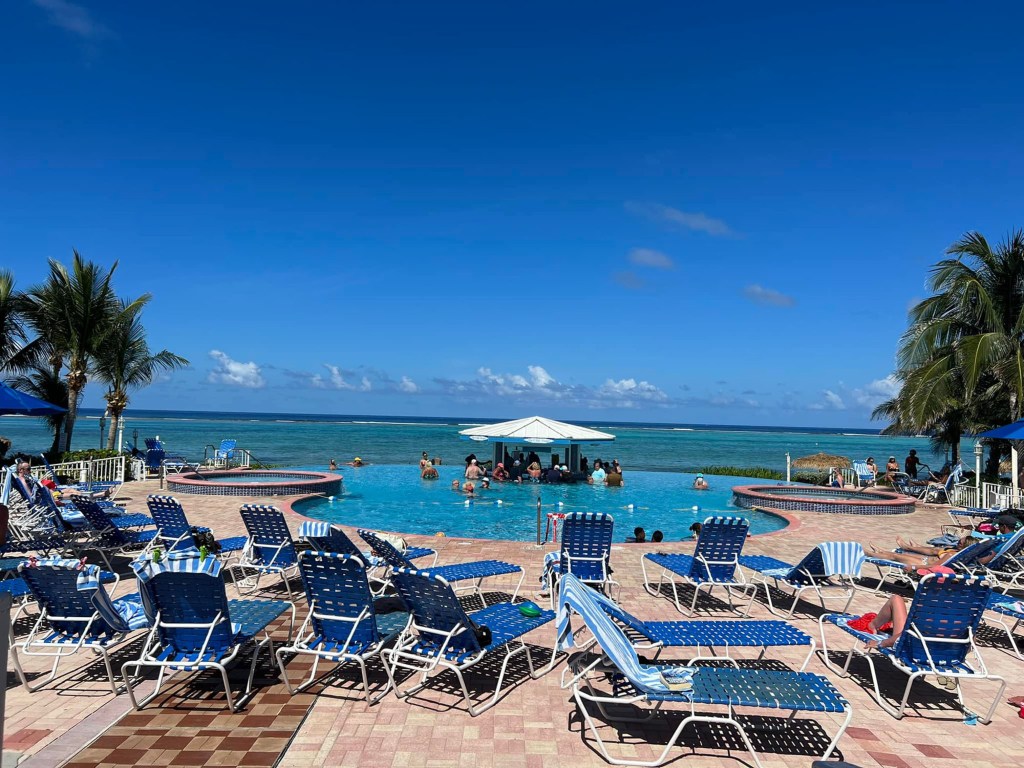 One worker at the beachfront result purportedly fessed up creating the fake flier and sending it to several rooms as a joke.

Meanwhile, the Daily Beast also launched its own investigation, contacting the hotel’s director of sales, Christopher Butcher, who similarly shut down speculation Hammer was working with the hoi polloi.

However, he admitted that the actor occasionally showed up to golf at the resort, and made an appearance there this past weekend.

“[Hammer] lives in Grand Cayman. One of my staff plays golf with him, and he had come in just to spend a day with one of my staff members to see what we do,” Butcher claimed.

“I’m sure they [hotel guests] would have seen him,” he continued. “He was outside having a cigarette … If you were a movie buff, you would recognize him.”

Butcher said past guests at the hotel have included Taylor Swift, Iggy Pop and Mark Cuban, so he’s surprised at the attention Hammer’s sighting had caused. 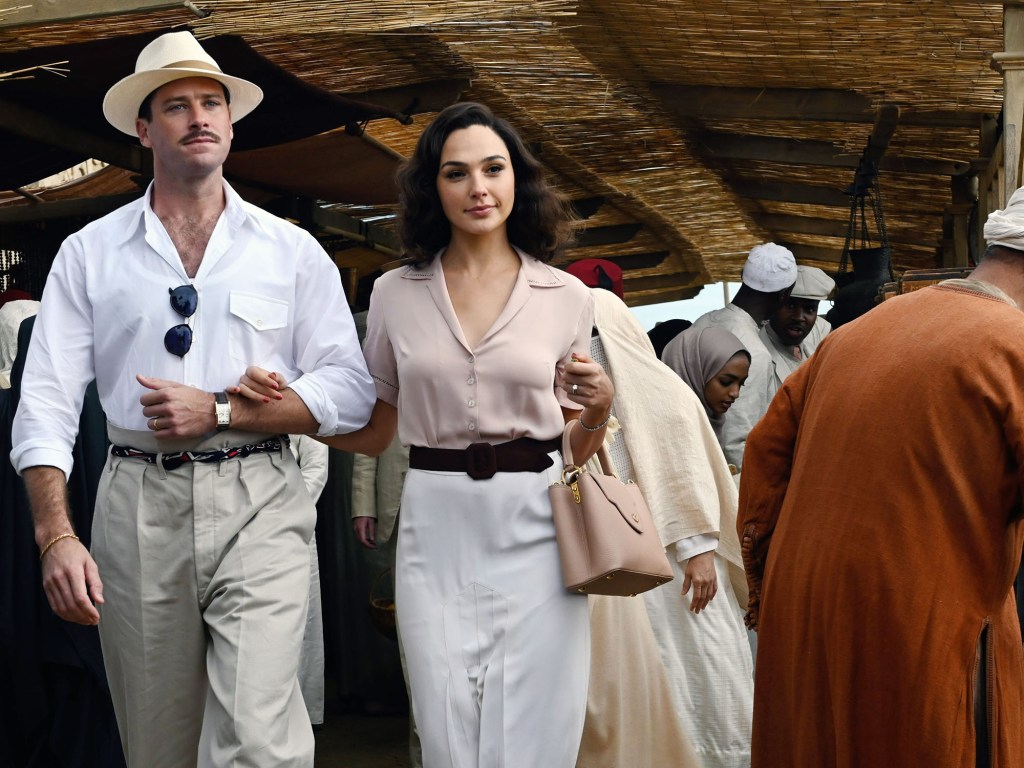 Hammer is seen opposite Gal Gadot in “Death on the Nile.” He has now been banished from Hollywood after disturbing sexual assault and cannibalism accusations.©20th Century Studios/Courtesy

“It never crossed my mind that we would get this much publicity just from someone hanging around the office,” he stated.

However, Hammer appears to be “hanging around” at the hotel quite a lot.

TMZ allegedly spoke to one person who stayed at Morritt’s last month, who said the star “did show at least one family around a timeshare on the resort property.”

Meanwhile, the Daily Mail published a photo of the actor at the accommodations on June 29, wearing “what appeared to be a staffer uniform.”

The snap shows “The Social Network” star clad in a blue polo shirt, which was tucked into sensible navy pants. 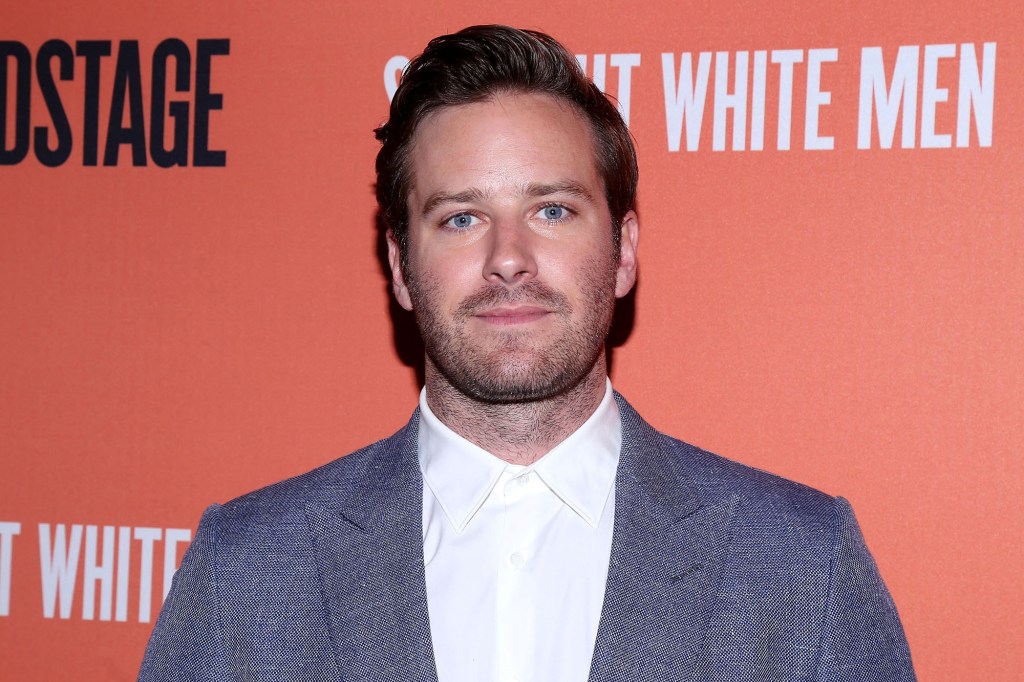 Hammer is reportedly now living in the Cayman Islands after being ousted from Hollywood amid sexual assault allegations.MediaPunch / BACKGRID

However, it’s also possible that Hammer could have put on the rather formal outfit for a round of golf.

It’s also unlikely the disgraced star is in need of any cash from a concierge job, given he’s the great-grandson of oil tycoon Armand Hammer, whose net worth was valued at a whopping $200 million before his death.

An upcoming true crime docuseries, set to air on Discovery+ and Investigation Discovery, will look into sexual assault and cannibalism accusations leveled against Hammer.

The doc also will dive into five generations of Hammer family secrets using “a trove of archive and interviews from survivors and family members” to examine “a dysfunctional dynasty with its male characters exhibiting all the devastating consequences of privilege gone wild,” according to Variety.

Hammer has denied all allegations of wrongdoing.

Next post Inside the fabulous Dior couture world of ‘Mrs. Harris Goes to Paris’