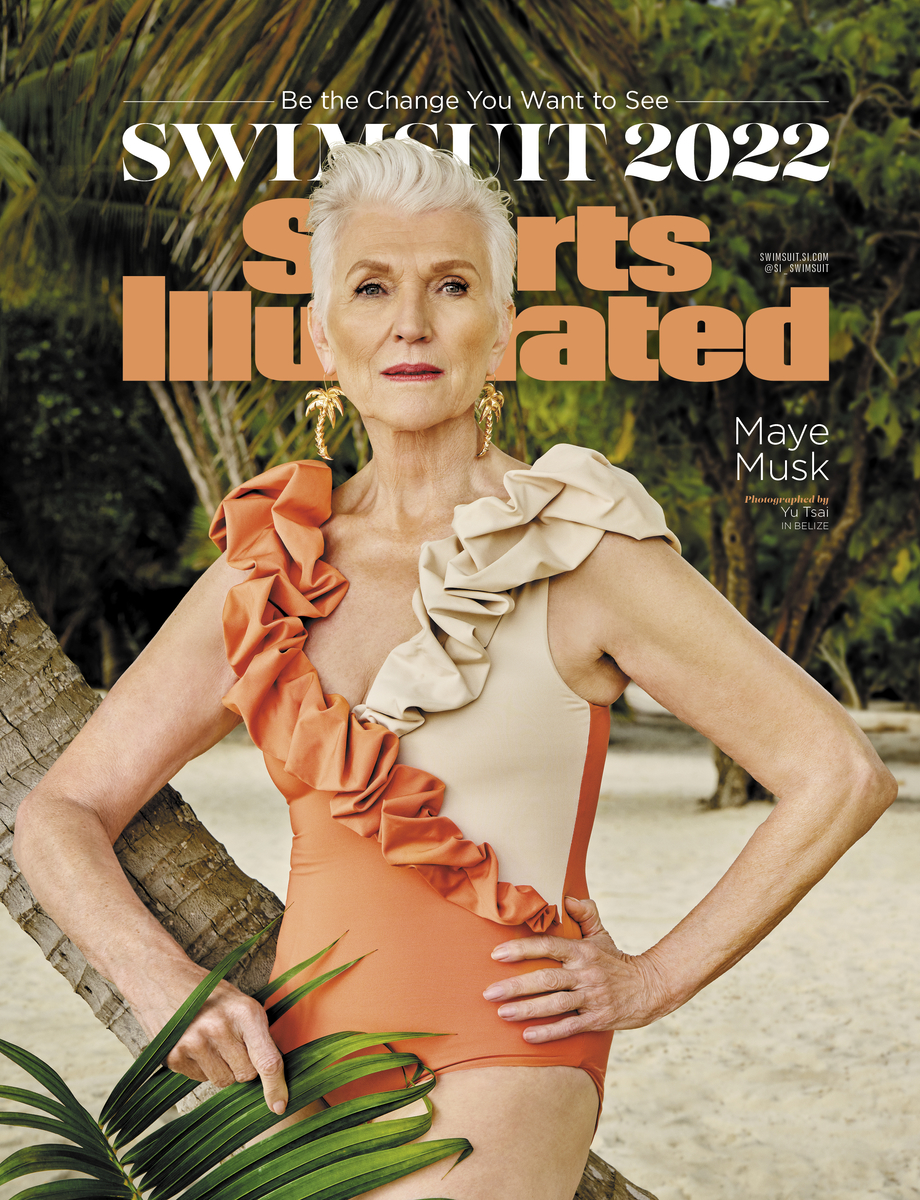 Elon Musk isn’t the only one in the family making waves.

His mother, 74-year-old supermodel Maye Musk, graces the cover of Sports Illustrated’s annual swimsuit issue in a one-piece suit by Colombian designer Maygel Coronel on the beach in Belize.She’s the oldest model to ever be featured in the glossy, out Thursday. In the pages within, she shows even more skin wearing a high-waisted bikini.

“It feels great,” Musk told The Post on a call Thursday about seeing her cover photos for the first time. “I’ve been modeling for 50 years, and I wasn’t considered a ‘swimsuit model,’ but now Sports Illustrated has let me know that they have a wide diversity of swimsuit models. I think it’s wonderful.”

She kept news of the shoot under wraps from her three kids, including Elon, who she joked would have broken the news on Twitter. “I wasn’t allowed to tell anyone. Nobody knew. I haven’t told my kids — I can’t tell anyone until Monday . . . [Elon] doesn’t even know I went to Belize.” 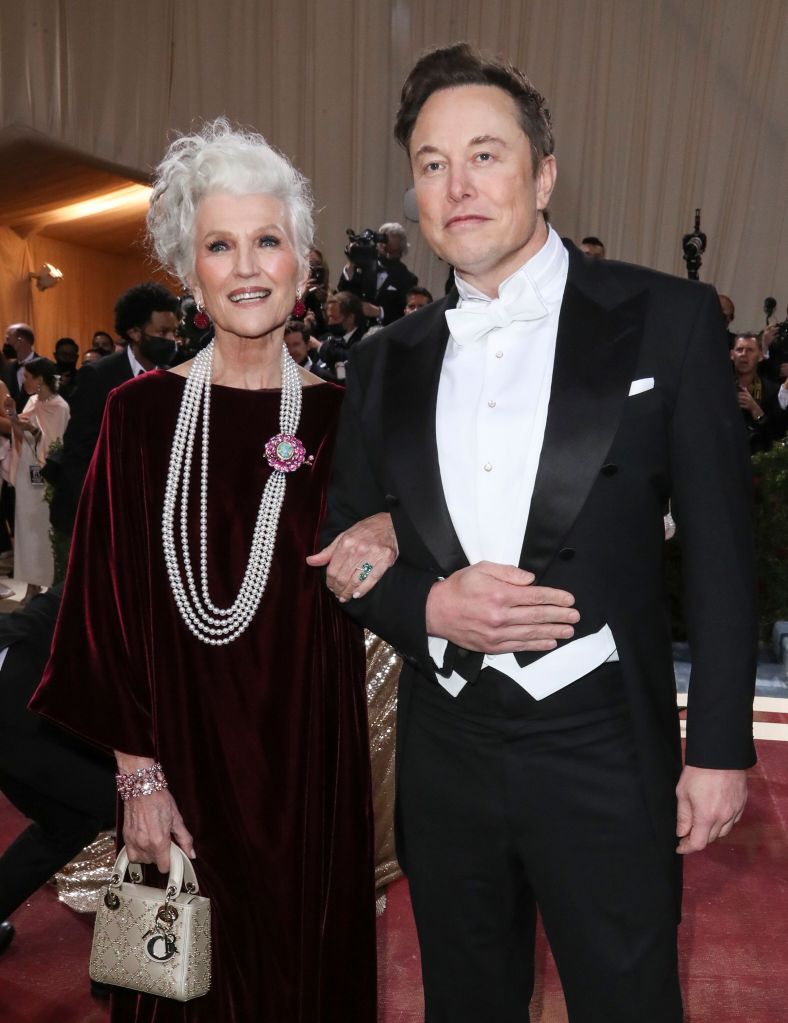 It took a little convincing for Musk to put on a bikini, admitting she’s always been “strictly” a one-piece kind of gal. She said she was sent 100 swimsuits to try on for the shoot, then she settled on a floral, high-waisted Zimmermann two-piece that nearly sent jaws dropping on set.

“Fortunately, there was no mirror, so I couldn’t see what I looked like, but when I came out of the dressing room, they all went, ‘whoa,’ ” Musk said. “It’s a high waist, so it tucked me in nicely. I look quite curvy. I just walked around like I’m a teenager.”

While she may have felt sweet 16, Musk hopes her splashy spread will help redefine the conversation around aging and so-called bikini bodies.

“I think woman of all ages . . . they’re scared of aging, and they’re scared they won’t look good in a swimsuit,” Maye said. “So now you know that I’m setting an example so women can walk freely in swimsuits and not worry about it.”

If anything, Musk’s career catapulted with age.

“I wasn’t natural [gray] until my late 50s. I colored it in various shades of blond — then I was told that probably nobody ever wants to book me, so I said, ‘Well then, I don’t care about my hair. I don’t have to color [it],” she said of embracing her signature silver mane.

“I cut it short ,and it looked fabulous. Then I left the agency that said I’ll never work again, and I got billboards in Times Square and then I got editorials . . . and then campaigns.”

Musk has become the poster-woman for aging gracefully, posing nude for Time magazine’s health issue in 2010. At 63, she appeared with a fake pregnant belly and her natural gray hair on the 2011 cover of New York Magazine to portray women over 50 having children. And at 69, she made history as the oldest CoverGirl.

More recently, she stepped out at the Met Gala with Elon in his first public appearance since news broke that he was buying Twitter.

“I had a beautiful Dior dress on and a handsome man on my arm,” she said, laughing. 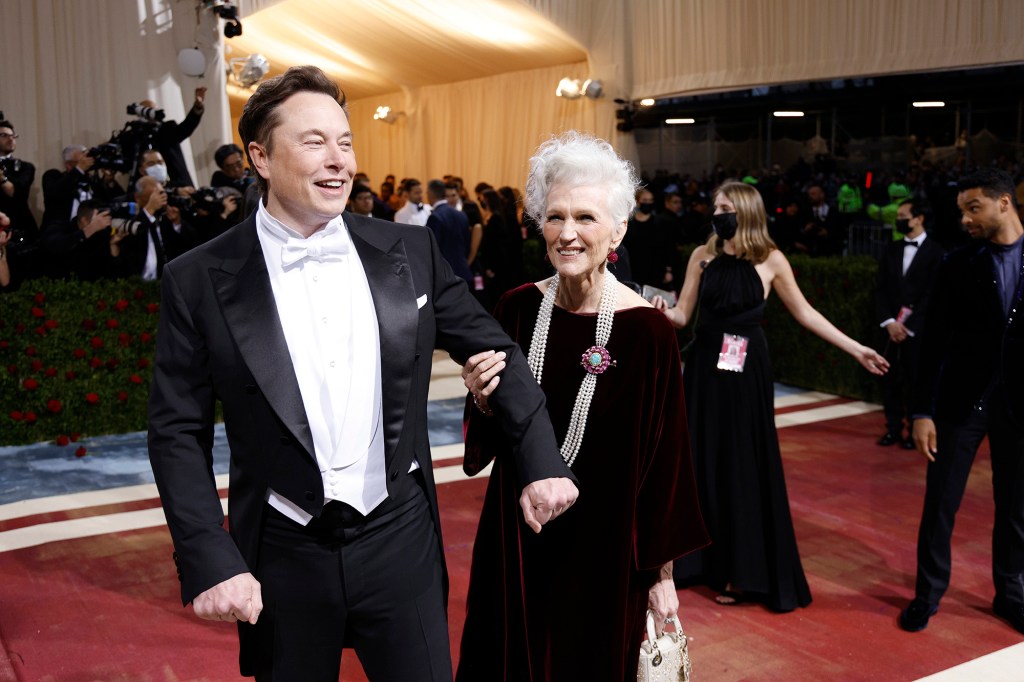 Maye told the Post she loved seeing her son “loosen up” on the carpet at the Met Gala earlier this month. EPA//JUSTIN LANE

“[Elon initially] didn’t want to walk the red carpet. I said, ‘You’re going to walk with me because I need somebody to hold on to.’ ” She said she loved seeing him loosen up, “even dancing in a goofy way” for the cameras. “I was so happy to get him away from space and rocket science and Tesla factories,” she said.

Unlike Kim Kardashian, who famously dropped 16 pounds to fit into Marilyn Monroe’s iconic gown for the Met Gala, Musk said she made very few changes to her diet leading up to her SI shoot.

“I don’t do crazy diets, you lose your energy. When I need to lose weight, I take away my high-fat foods — no fries, or fried chicken or sauces. I’d cut out dessert, and then I can drop a couple of pounds quite quickly,” Musk said.

After the shoot, which involved Musk standing on a hidden structure in the ocean to make it look like she was walking on water, she celebrated with an indulgent meal.

“The last night, we went to the most fabulous restaurant for dinner. I had dessert. I said, ‘Just order and I’ll have a taste.’ Sweets are my weakness,” she said. 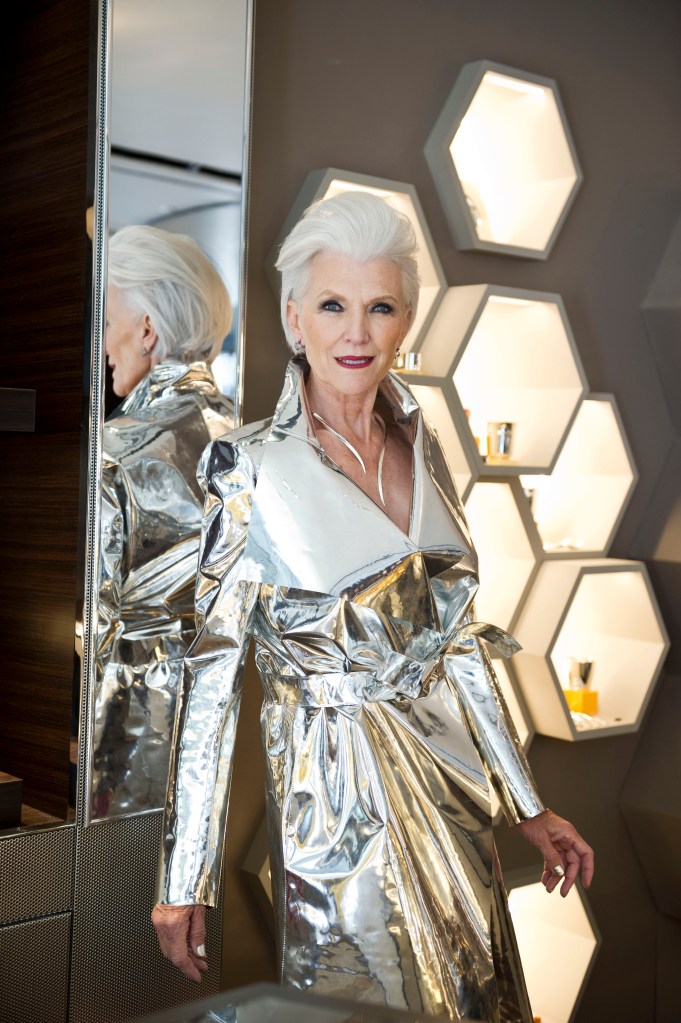 Musk has kept her silver hair natural since her 50’s and has gotten more modeling jobs ever since. Annie Wermiel/NY Post

Her drink of choice? “I like a rum and Diet Coke or a fruity cocktail — I like sweet drinks.”

And while her title may be “supermodel,” she’s still a mom first, taking to Twitter to defend her son after the New York Times ran a story suggesting he was “detached from apartheid’s atrocities” amid his early upbringing in South Africa, which she took issue with.

“In South Africa, if you publicly opposed apartheid, you went to jail,” Musk pointed out in a tweet to Tthe Times comparing it to “how today in Russia if you publicly oppose the war, you go to jail.” She asked the publication: “Are you going to blame children for decisions made by governments?” 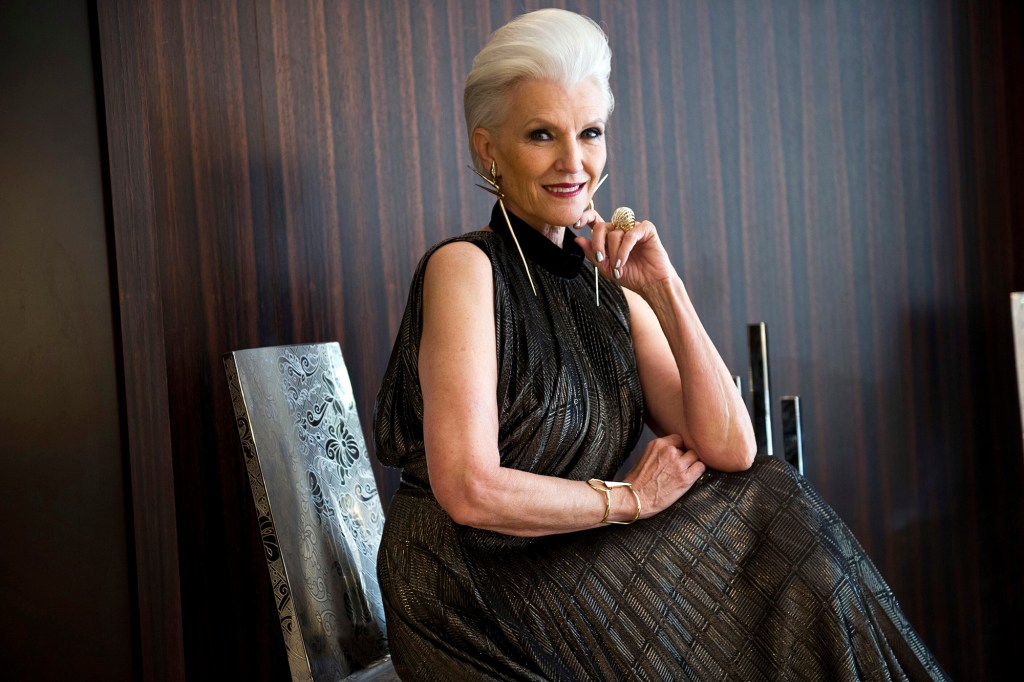 “My agents are not going to be sleeping for a while,” Musk told the Post of her upcoming book tour following the SI shoot. Annie Wermiel/NY Post

“Of course he’s treated unfairly because he’s making big changes,” she said, suggesting that the fossil-fuel industry resents him for popularizing electric cars.

Maye has spoken about her humble beginnings as a single mom at age 31, struggling to provide for her three kids financially. She started modeling in South Africa in the late 1960s and took a job teaching nutrition before starting a dietitian practice of her own in Canada.

With a new book out, “A Woman Makes a Plan,” she’ll continue to tour, heading to Cannes, France, next for the film festival and on to Korea to speak about her book.

She said, “My agents are not going to be sleeping for a while.”