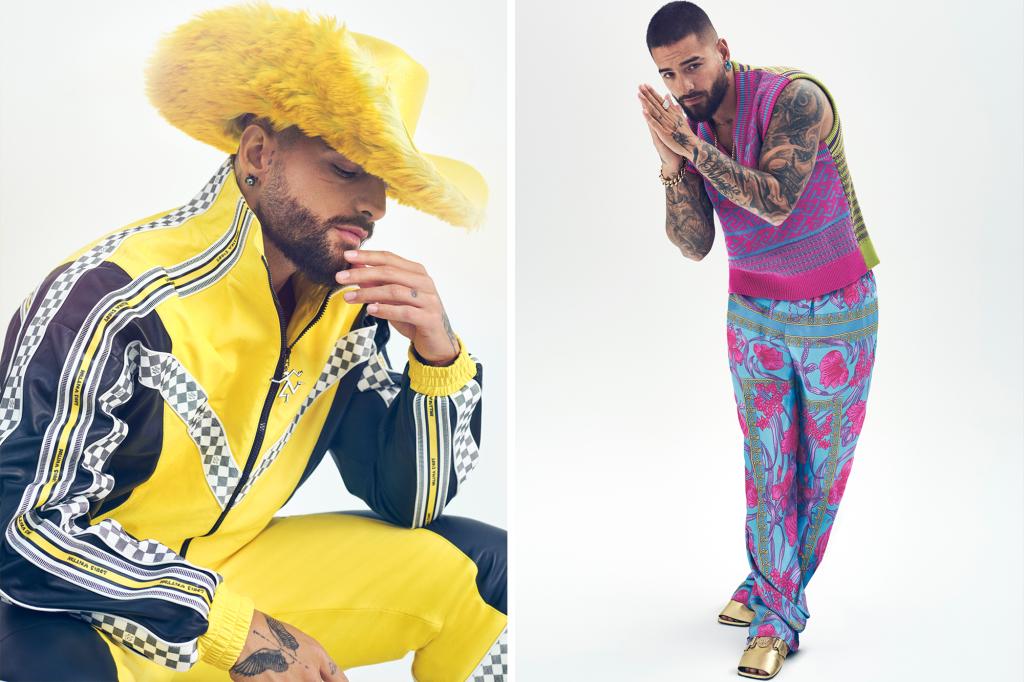 It’s five days after Maluma’s 28th birthday, which he celebrated in ultimate baller style at a $25 million mansion in Las Vegas. And it’s nine days before “Marry Me,” his charming big-screen debut opposite Jennifer Lopez and Owen Wilson, opens on Valentine’s Day weekend.

But despite all the buzz, he’s the picture of chill as he strolls into a Midtown Manhattan studio for his Alexa photo shoot. No doubt, it’s about to get harder for the Colombian reggaeton sensation to walk down the street just minutes away from Times Square without getting mobbed by swooning fans. After all, he’s one of the world’s most eligible bachelors. And while his “Marry Me” character Bastian is getting hitched to fellow pop star Kat Velez (played by Lopez), the happily single Maluma isn’t sure if he’ll ever say those “I do’s.”

“I don’t really know if I want to get married,” says the artist, born Juan Luis Londoño Arias. “Of course, I want to have a family; I always dreamed about having children. But I don’t know if I will get married … I’m so young, you know, I don’t have to start thinking about it. But now I’m focusing on my career.” 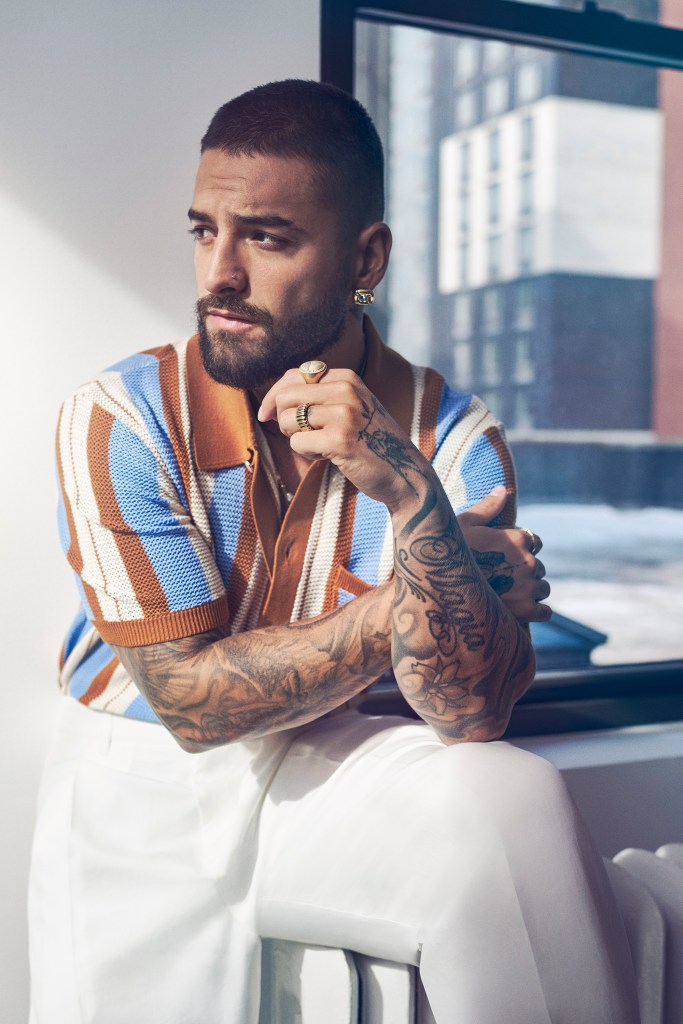 And a muy caliente career it is. He’s currently bopping across the globe on his “Papi Juancho” world tour, which — named after his 2020 album and alter ego — sold out Madison Square Garden last October. Winner of both a Latin Grammy and an MTV Video Music Award, Maluma has collaborated with everyone from Madonna and The Weeknd to fellow Colombians Shakira and J Balvin. In addition to “Marry Me,” he voiced the character of Mariano in the Disney hit “Encanto.” And he’s set to launch his Royalty by Maluma clothing line at Macy’s today, after the brand’s cologne hit the department store earlier this month.

He’s certainly learned a lot from watching his “Marry Me” co-star Lopez work her skills as a master multitasker, bouncing from music and movies to fashion and beauty.

“I was a big fan of Jennifer, but I became more of a fan when I met her in person,” says Maluma. “I love the way she works, the way she handles every situation, how professional she is. I love that about her.” 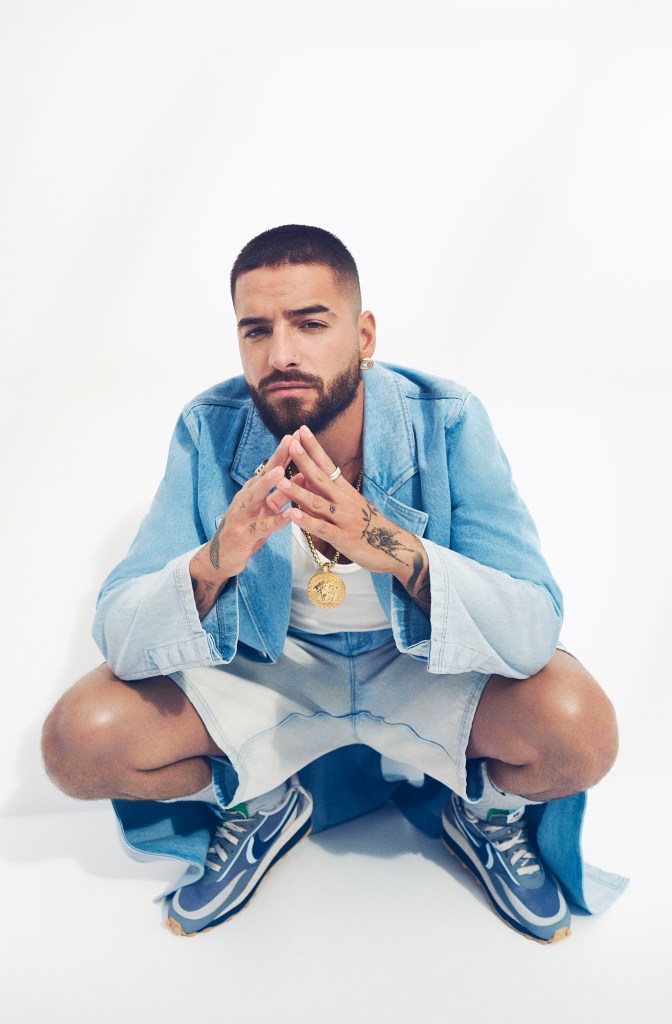 He’d been angling to work with Lopez through her ex-husband, Marc Anthony. (The guys had collaborated on a salsa version of Maluma’s 2017 hit “Felices los 4.”) “I’m super close with Marc, and I was always telling him that I wanted to work with Jennifer,” he says. “I was like, ‘Yo, bro, I don’t know if you guys talk or whatever, maybe because you guys have children together. But I want to work with her.’”

Maluma got his wish when Lopez reached out to him to play “douchebag” Bastian in “Marry Me.” The two instantly clicked, both as co-stars and music collaborators, releasing the singles “Pa’ Ti” and “Lonely” in 2020. “The first time that we worked together, we were in the studio, and it was super fluid,” he recalls. “Maybe it’s because she still has Latin roots, you know? So she knows how I feel when I listen to music that I love. We felt that immediate connection.”

Their bond extended to shooting a big scene for the rom-com (in which they sing the title tune) on the Bronx-born Lopez’s home turf, during Maluma’s sold-out concert at Madison Square Garden in October 2019. “It was beautiful … having Jennifer with me at the Garden,” he says. “She lived a long time in New York. She was the local.” 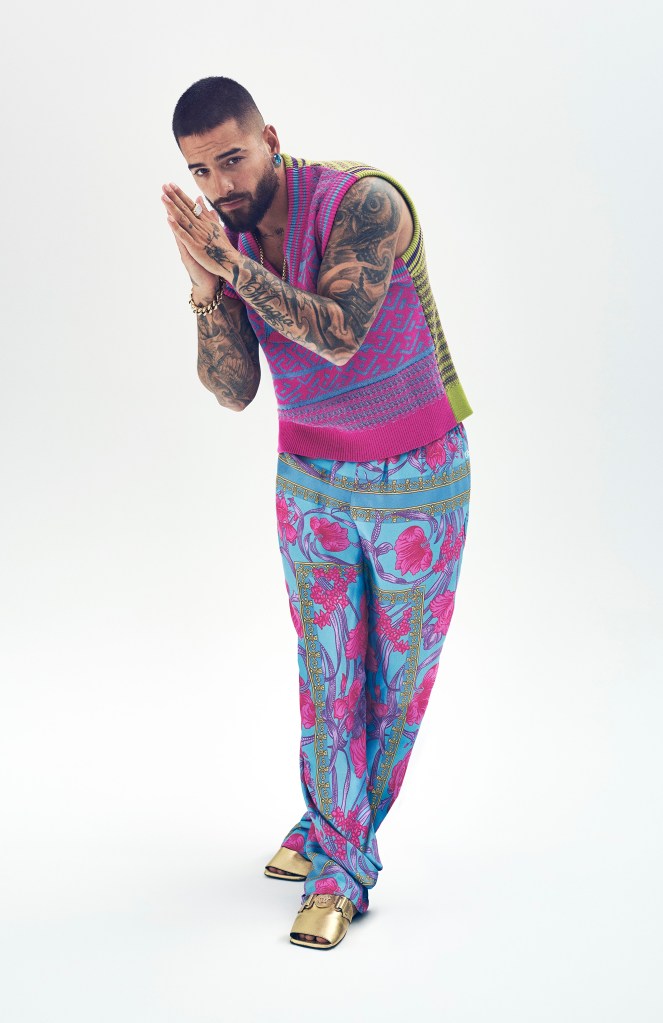 Maluma on his inspiring friendship with Madonna

Maluma has also turned to another superstar pop diva — Madonna — for advice. The two M’s met at the 2018 VMAs and quickly formed a friendship; he represented his Colombian hometown on their 2019 single “Medellín.”

“She works harder than me,” he says of the singer, 35 years his senior. “I remember we were recording in LA; we were in the studio for two days in a row. I wanted to f – – king go to the hotel, change and take a shower, and she was like, ‘No, we’re gonna stay right here.’ So if she’s not complaining, why am I gonna complain?

“I love her,” he continues. “I love what she’s done with her life.”

Like both Madonna and J.Lo before him, Maluma is also striking a pose for Versace. He’s the face of the men’s spring-summer 2022 campaign for the fashion house. “It reminds me of my grandparents a lot — they used to love Versace, too,” he says. “And then I showed them the campaign, and they feel super proud of it.” 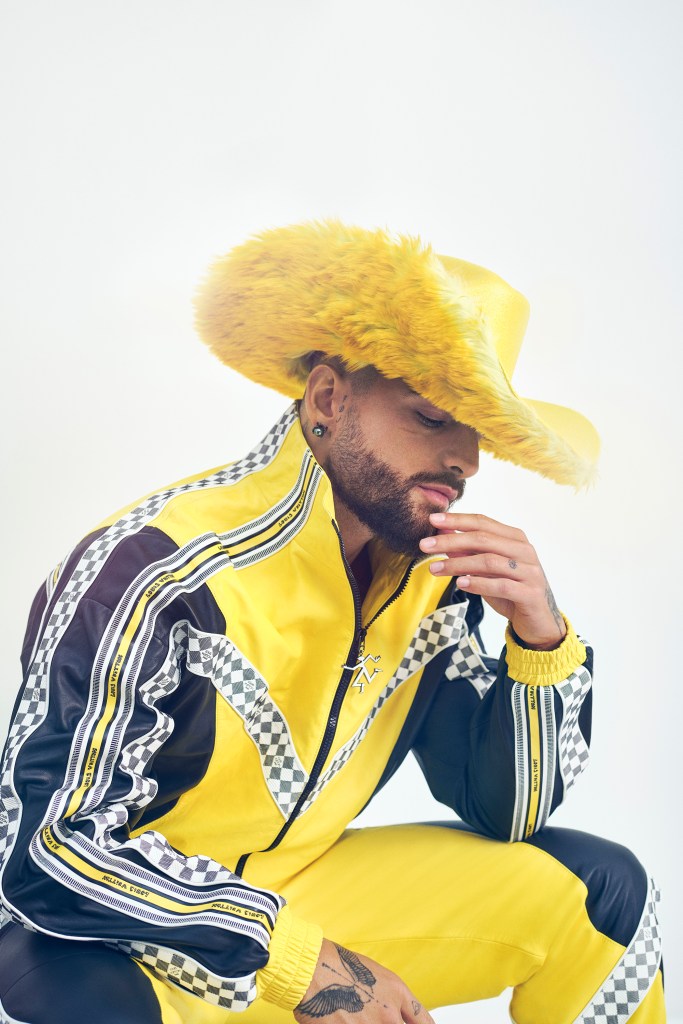 And now the “Hawái” heartthrob has his own clothing line, Royalty by Maluma. So how exactly did he go from crooner to clothier? “I think that the mind is infinite. You can create whatever you want. And I love fashion,” he says. “I would say the inspiration is coming from my roots, my country, my city, my family … I love denim, I love different fabrics that remind me of the mountains of Medellín. Also, the clothes that we were designing for women reminded me a little bit of my mom.”

Maluma made sure his line would fit and flatter all body types. “I designed things that everybody can wear — it doesn’t matter the size,” he says. “If you know how to rock it, you’re gonna feel comfortable with it.”

The name of his brand, Royalty, was inspired by the love — and loyalty — he has been shown from his hometown fans. One of his 30-plus tattoos (he’s “lost count”) is a crown on the left side of his neck in honor of them. “I got it because of my fans,” he says. “If the king has a crown, it’s because the people from the town gave it to him. I felt like the people in my hometown, they were loving my music, they were loving my movement.” 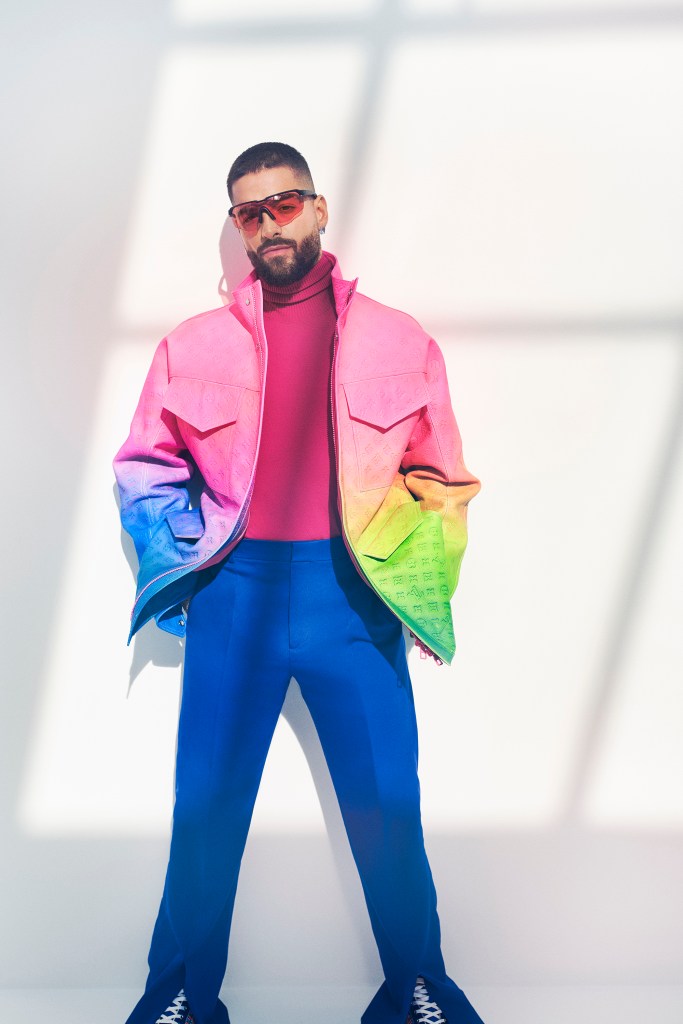 On April 30, Maluma will play for 50,000 fans at the “Medellín for the World” concert at the Atanasio Girardot stadium. It’s that kind of support that makes him maintain his home base in Medellín (although he also has a place in Miami). It also keeps him close to his family, who inspired his musical moniker — a combination of the first two letters of his mother’s name (Marlli), his father’s name (Luis) and his sister’s name (Manuela).

But the star reps for his country wherever he goes, which is why it was so special for him to be a part of “Encanto” — an animated film about a Colombian family. (He voices Isabela’s hunky fiancé, Mariano.)

“I wanted to be in the movie so bad that I tried to find a way to record the vocals in the middle of the ‘Papi Juancho’ tour,” he says. “I love being part of one of the movies that is changing the face of my country. I feel connected with the movie because that’s something that I’m trying to do too right now, you know? I don’t want people to talk about Colombia and think about drugs, about violence, about Pablo Escobar. That’s not Colombia anymore … we feel proud of being part of the change.” 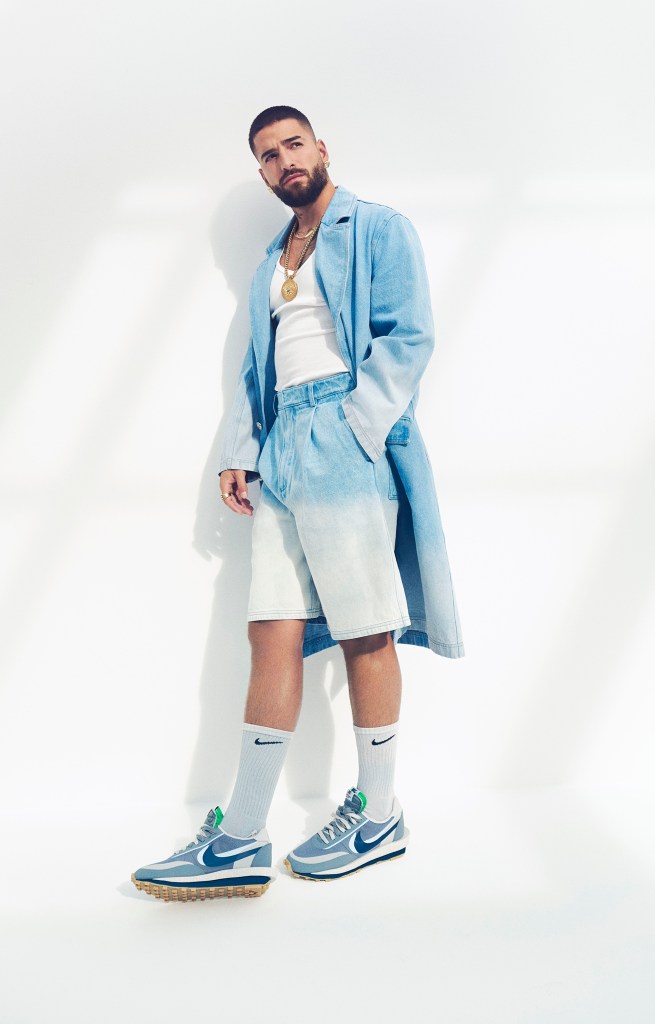 The singer’s new clothing line, Royalty by Maluma, drops tomorrow at Macy’s. “I designed things that everybody can wear — it doesn’t matter the size,” he says.Kurt Iswarienko

Although Maluma sings in English for the first time on “Marry Me,” don’t expect him to give up on recording in Spanish. Just check out his sexy new single “Cositas de la USA.” “I’m a huge fan of American hip-hop: 50 Cent, Snoop Dogg, Dr. Dre. I was raised listening to that music,” he says. “But my favorite is Spanish [language] music … and I’m not going to change it. It doesn’t mean that I’m never going to sing in English, of course. But let’s wait for right now.”

And while he’s also holding off on any thoughts of marriage, Maluma says he has experienced some “beautiful relationships.” He dated model Natalia Barulich and then, after they split, was spotted getting cozy with another model, Vivien Rubin. Recently, the self-proclaimed romantic has been linked with Colombian architect Susana Gómez.

“I don’t want to say that I’m in a relationship, because it’s not like that,” he says. “I’m just letting things go with the flow. You know, I’m just taking care of the people that I love. I’m taking care of my career. Everything is happening in a good way. I’m happy, and I’m at peace with myself. I’m just living a beautiful moment.”