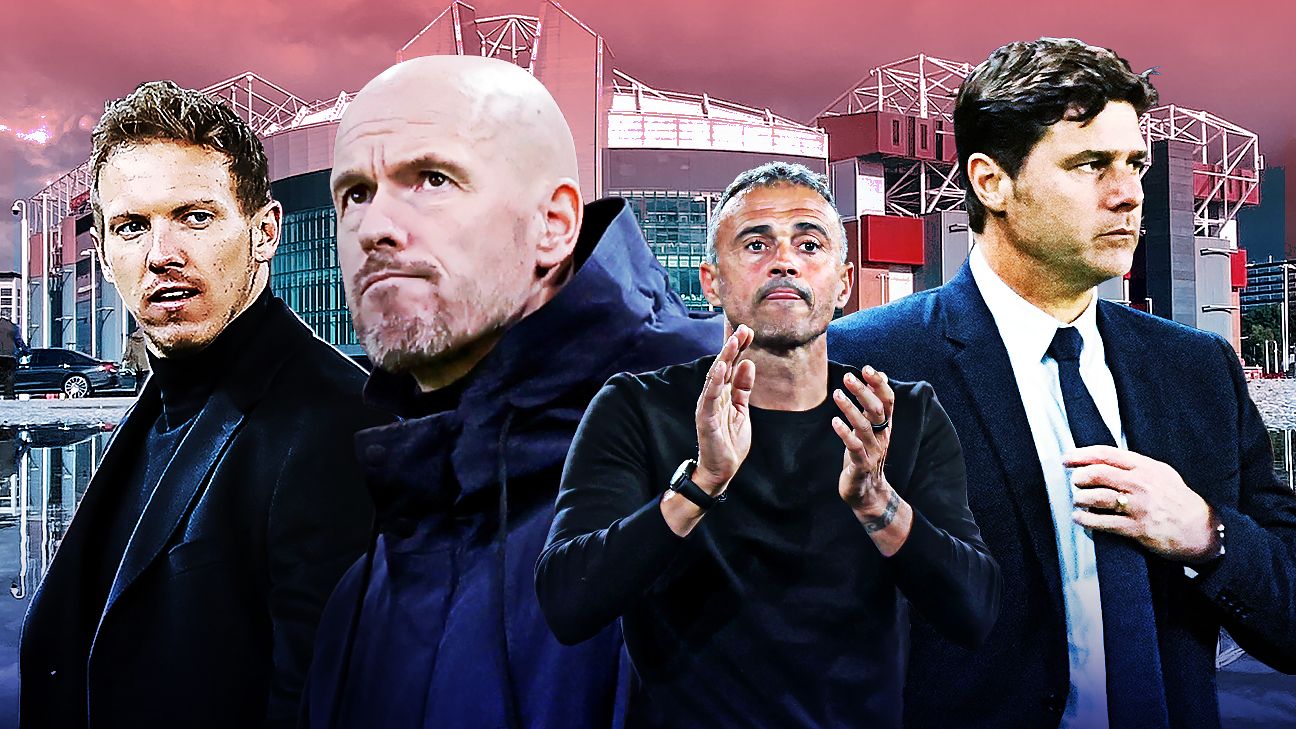 Manchester United chiefs are increasingly concerned that a chaotic end to the season is having a damaging impact on their search for a new permanent manager, sources told ESPN.

United have started the process of appointing their next manager with contact made through intermediaries to assess the availability of preferred candidates. However there are fears that a string of poor results and the risk of missing out on Champions League football, as well as doubts over the futures of senior players and reports of unrest within the squad, is hampering the process.

Sources told ESPN that at least one coach in the frame for the job has used his own contacts to gauge the mood in the dressing room and assess how committed key players are to remaining at Old Trafford in an effort to discover how big of a rebuild is required. Conversations with candidates have also touched on what would constitute short-term success at the club over fears it could take years for United to become realistic challengers in the Premier League and Champions League.

– Stream LIVE games and replays on ESPN+ (U.S. only)
– Who could be United’s next manager?
– Ogden: Pochettino to United latest

PSG’s Mauricio Pochettino and Ajax boss Erik ten Hag are the frontrunners for the role but United remain committed to an extensive search that will include a number of candidates. Sources told ESPN the club are hopeful of making an announcement before the end of the season to ensure the new man can play a full part in the recruitment of new players in the summer. Managers at Old Trafford are given a veto on signings along with the recruitment department.

Doubts over key players are also adding to the uncertainty at United. Paul Pogba and Jesse Lingard are out of contract in the summer and nine first team players have deals expiring in 2023.

Cristiano Ronaldo is yet to make a decision on whether he will stay at the club next season while sources told ESPN that Marcus Rashford has reservations about his future. Rashford has a contract until 2023 with the option of another year but is in no rush to sign an extension.

The 24-year-old is keen to win back his place in the team under interim boss Ralf Rangnick and nail down a regular position after being tried in a number of roles since breaking into the senior squad as a teenager. — Rob Dawson

Manchester United’s chaotic season is impacting their search for a new manager. ESPN

In a dramatic intervention, the U.K. government imposed sanctions on Abramovich on Thursday, meaning Chelsea are effectively frozen as one of Abramovich’s assets. The freeze means the sale of the club is on hold and they are unable to sign players to new contracts.

– Olley, Marcotti: What does Abramovich sale mean for Chelsea?

Sources told ESPN, however, that although a sale cannot go ahead as things stand, Abramovich could apply for a license to allow a sale, which the U.K. government would consider.

Any such licence would not allow Abramovich to benefit from the sale of the club while he remains subject to sanctions, and no bids have met his £3 billion value of the club.

The Danish centre-back has held talks with Barcelona and Bayern Munich among other clubs. Barcelona are also hopeful of landing Azpilicueta, who has attracted interest from Atletico Madrid, while Rudiger’s suitors include Manchester United, Real Madrid and Newcastle United.

The government has issued a special license for Chelsea to remain operational, which includes playing fixtures, paying staff and enabling season-ticket holders to attend home matches. That will be kept under review and expires on May 31, or when Abramovich sells Chelsea — whichever comes sooner — and there is hope at Stamford Bridge that all three can be retained for next season and beyond.

Barcelona were already growing confident about attracting Christensen and Azpilicueta prior to Thursday’s announcement and although Rudiger was thought to be increasingly likely to stay, his future is more unclear than ever. — James Olley

James Olley explains the trouble Chelsea will face in convincing their out of contract players to stay.

A group of American investors led by the owners of the NBA’s Orlando Magic and the NFL team Minnesota Vikings have expressed an interest in buying LaLiga club Espanyol, sources confirmed to ESPN.

Barcelona-based Espanyol have been owned by Chinese businessman Chen Yansheng since 2016 but sources say he is willing to listen to offers for the club. The American consortium which includes Dan DeVos, owner of the Magic, and the Wilf family (Zygi, Leonard and Mark) who run the Vikings and MLS side Orlando City, have sounded out a deal.

Mallorca are the only U.S-owned club in Spanish football’s top flight; however, there are several in the Premier League. Liverpool is owned by American businessman John W. Henry, and Manchester United is owned by the Glazer family who also own the Tampa Bay Buccaneers. Meanwhile Burnley, Aston Villa, Crystal Palace and Leeds United have mixed ownership.

Espanyol are 12th in LaLiga with 32 points, eight points clear of the relegation zone with 11 games to play. — Sam Marsden and Moises Llorens

Garnacho, 17, was one of the surprise inclusions in Lionel Scaloni’s squad for the World Cup qualifier against Venezuela and Ecuador at the end of March. The forward, who scored as United booked their place in the FA Youth Cup final this week, has not featured for the first team at Old Trafford, but could find himself rubbing shoulders with Lionel Messi and co. later this month.

Garnacho, who joined United from Atletico Madrid in 2020, has previously represented Spain at youth level and has never visited Argentina — the country where his mother hails from. However, sources told ESPN that Argentina are pushing much harder than Spain for him to commit his international future to the Albiceste in the long term. — Sam Marsden and Moises Llorens

Julien Laurens feels Sergio Aguero can be a positive influence on Argentina if he joins the staff for the World Cup.

A man who was involved in the violent incidents in Saturday’s Liga MX game in Santiago de Queretaro was handed into police by his mother.

The woman, who said she was “heartbroken”, recognised her son through widely circulated videos on social media of the clashes between supporters during Queretaro’s match against visiting Atlas at Estadio Corregidora.

The game was suspended in the 62nd minute after violence in the stands spilled onto the pitch, and 26 people were injured in the clashes while police arrested 14 individuals, including the person who was brought in by his mother.

“The authorities came to my house and he [the son] wasn’t there,” she said. “The police told me that I had the option to give him in if he communicated with me for his and our own good. He arrived a while ago and I spoke to him and I told him what the situation was.

“He didn’t say anything, accepted everything and he told me yes so here [at the crime investigation police department] we are.

“I’m heartbroken, I’m crushed but here I am and I’m with him,” she added.

– Liga MX: What has changed after Queretaro-Atlas violence?
– Alexander: Why it’s time for Liga MX to ban ultras for good

The individual in question was examined by doctors at Queretaro Prosecutors’ Office before being transferred to the San Jose el Alto penitentiary.

More than 400 videos of the incident have been made available to authorities to identify aggressors and those that initiated the brawl. The prosecutors’ office have appealed for help in identifying 14 other individuals suspected of being involved in what was described by the country’s media as “the darkest day of Mexican football”.

Of those injured, one person remains at Queretaro’s General Hospital while the rest have been discharged.

Mexican coach Javier Aguirre was among those shocked by the ugly scenes in Queretaro.

“It was horrifying,” Aguirre, who was recently at the helm of Mexican club Monterrey, said. “I’ve been in professional football for 45 years, I’ve never seen anything like it and I’ve been in many places.”

Those arrested are expected to face charges of violence in a sporting event and attempted homicide. Those found guilty will also be handed lifetime stadium bans. Mexico football authorities have punished Queretaro, who will be forced to play their home games behind closed doors for a year while a three-year ban has been handed to their supporters groups.

The Liga MX has also approved other safety measures to avoid such episodes from happening again, including implementing fan IDs starting from the 2022-23 campaign. — Adriana Garcia

Spectators rush onto the pitch after fights erupt in the stands between fans of Queretaro and Atlas.

Juventus striker Paulo Dybala is calling on professional footballers all over the world to get in touch with Common Goal to help people affected by the war in Ukraine.

The charity initiative, initially led by Manchester United midfielder Juan Mata, has set up the Team Up For Ukraine emergency response.

Common Goal is already supporting victims of the conflict but Dybala, who is already one of the fund’s 200 members, is calling on other players to help.

He said: “It’s heart breaking to see what’s happening in Ukraine. The Common Goal Team Up For Ukraine emergency response is offering an opportunity to work together to provide immediate humanitarian aid and ensure long-term support to those affected by the war.

“Common Goal welcomes everyone in football and the wider society to get in direct touch if they wish to identify ways in which they can support.” — Rob Dawson

Next post Mutations leading to omicron variant did not enable virus to fully escape immune system: Study shows people with immunity to original SARS-CoV-2 likely maintain some protection against omicron