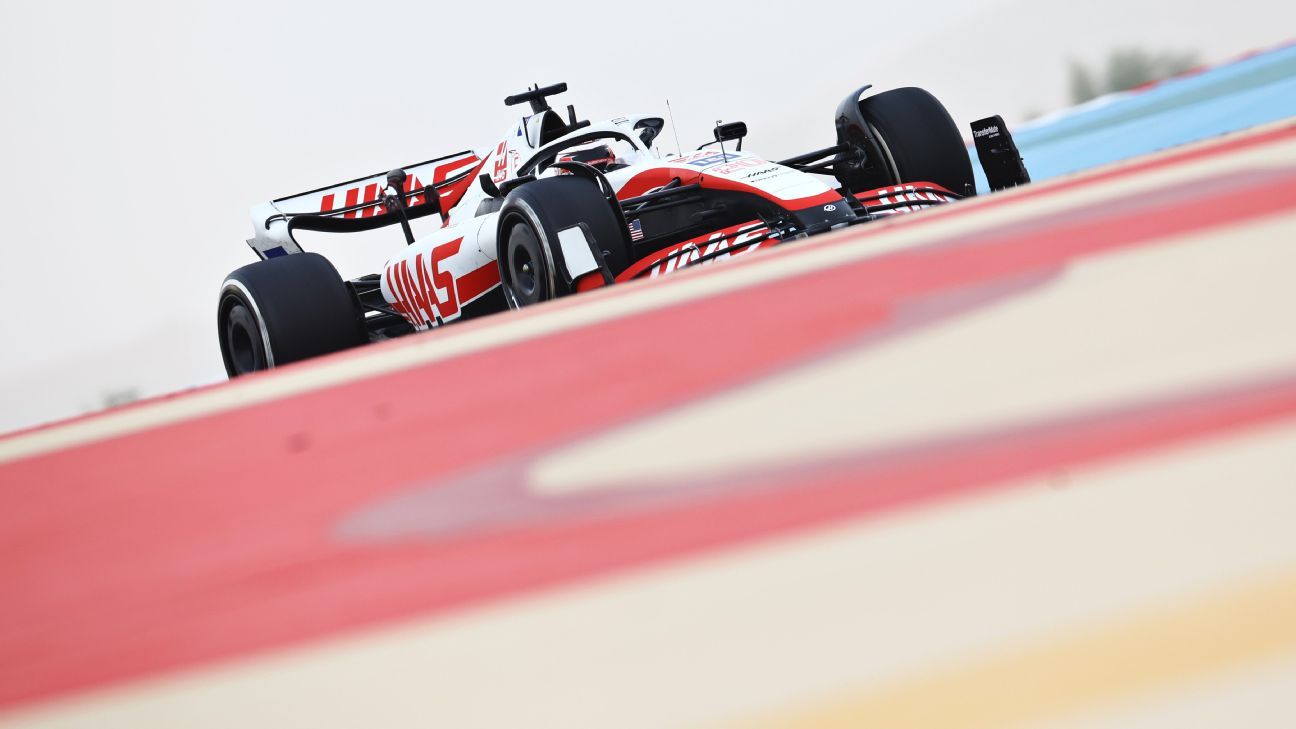 SAKHIR, Bahrain — With one day of preseason testing remaining, F1 returnee Kevin Magnussen set the fastest lap of the week with a time set during an extended period of running for his Haas team.

Magnussen, who previously raced for Haas from 2017 to 2020, replaced Russia’s Nikita Mazepin at the team ahead of this week’s test. On his first day back in the car, he pushed Carlos Sainz off the top of the timesheets with a lap 0.325 seconds quicker than the Ferrari driver using the same compound tyre.

The time was set during an extended period of testing for Haas, which was laid on after the other nine teams had finished the regular test session. The extra hour on Friday — as well as a further three hours on Saturday — was granted to the team to make up for the time it lost on Thursday after its freight got delayed on the way to Bahrain.

During Friday’s regular eight hours of testing when all 10 teams were on track, Sainz set the fastest lap with an effort 0.4 seconds clear of the rest of the field. The time was also set on the C4 compound tyre — Pirelli’s second softest on offer — and was fast enough to hold off a comparable attempt by Max Verstappen in the Red Bull car on the same compound.

Fuel loads and engine settings are unknown outside each team’s garage in testing, so it’s possible that Verstappen’s time would have been in a similar ballpark had all things been equal, but it could also be the case that Sainz might have extended his lead — as shown by the impressive pace of Magnussen’s lap later in the evening.

Either way, another strong showing from Ferrari on Friday helped to enforce the growing opinion that the Italian team has made the strongest start to 2022 under F1’s new technical regulations.

And while Ferrari appears to be back at the sharp end of the grid, reigning constructors’ champions Mercedes could be in trouble.

The team debuted its heavily revised W13 car on Thursday but has struggled to extract performance from it over both days of this week’s test. Lewis Hamilton cycled through single-lap runs on Pirelli’s softest compound tyres toward the end of the session, but his best lap time on the C5s was still 0.609 seconds off Sainz on C4s and 0.934 seconds off Magnussen.

When asked after the session what the result of next weekend’s Bahrain Grand Prix would be if it was held tomorrow, Hamilton said: “I really don’t know. I think Ferrari … from what I can see today, Ferrari would probably be getting a 1-2.

Sainz downplayed this talk during Friday’s news conference when asked about a quote from Hamilton’s teammate George Russell suggesting Ferrari are favourites going into the March 20 opener.

“Typical Mercedes, typical George,” Sainz said, laughing. “Just hype up the others and then come to the first race and blow the competition away.

The upgraded Mercedes looked difficult to drive and continued to bounce up and down on the pit straight as the team experimented with ways of curing the porpoising issues it has suffered all week. On the plus side, Russell managed to complete a race simulation in the morning session, which should have given the team plenty of data to work through and find improvements.

The second day of the Bahrain test also proved to be a bit of a car breaker, with 37 degrees Celsius (98 degrees Fahrenheit) heat stretching cooling solutions to the limit.

The most dramatic failure occurred on the Williams when the rear brakes of Nicholas Latifi’s car caught fire as the desert heat peaked around midday. The first sign of trouble came when smoke started pouring from the rear wheels of the car, but Latifi attempted to make it back to the pits in the hope the airflow would extinguish the fire.

He got as far as Turn 13 — two corners from the pit lane — when the left rear wheel buckled under the heat and cornering load, causing the car to spin off into the run-off area. Flames engulfed the rear of the car once it stopped, and a small explosion occurred as a marshal attempted to put out the fire.

Both Latifi and the marshal were unharmed, but the issue put an end to Williams’ running after just 12 laps. McLaren continued to manage brake-cooling issues during the second day of testing after its running on Thursday was also limited by brake problems. Although the team did not experience anything as dramatic as Williams’ fire, Lando Norris was limited to 54 laps on Friday after just 50 laps on Thursday. In the final hour, Norris also stopped on track moments after leaving the pit lane, causing a red flag.

Norris was not supposed to be driving the McLaren on Friday but was subbed in when Daniel Ricciardo was ruled out for a second day in a row because of illness. Ricciardo felt unwell on Thursday morning, meaning he missed that test session too, but the team has confirmed he has not tested positive for COVID-19.

Valtteri Bottas’ Alfa Romeo also caused a red flag when his car stopped at Turn 9 in the final minutes of the morning session. The FIA had hoped to test its race restart procedure with a mock grid at the end of the session, but after lining up on the grid for an aborted start procedure, Bottas’ car stopped on track on the following lap before the grid could reform for a race-style restart. Bottas finished the day 11th fastest overall.

Esteban Ocon also caused a red flag in the afternoon when his Alpine car stopped on track. He had enjoyed a productive day up to that point, with 111 laps in total by the chequered flag and the sixth-fastest time.

Sebastian Vettel stopped on track in the Aston Martin in the final hour of the morning session, but he quickly returned to the track once the car had been recovered, suggesting there was no major issue with the car. Teammate Lance Stroll took over the Aston Martin in the afternoon and set the fourth-fastest lap with a time 0.857 seconds off Magnussen using the same C4 compound.