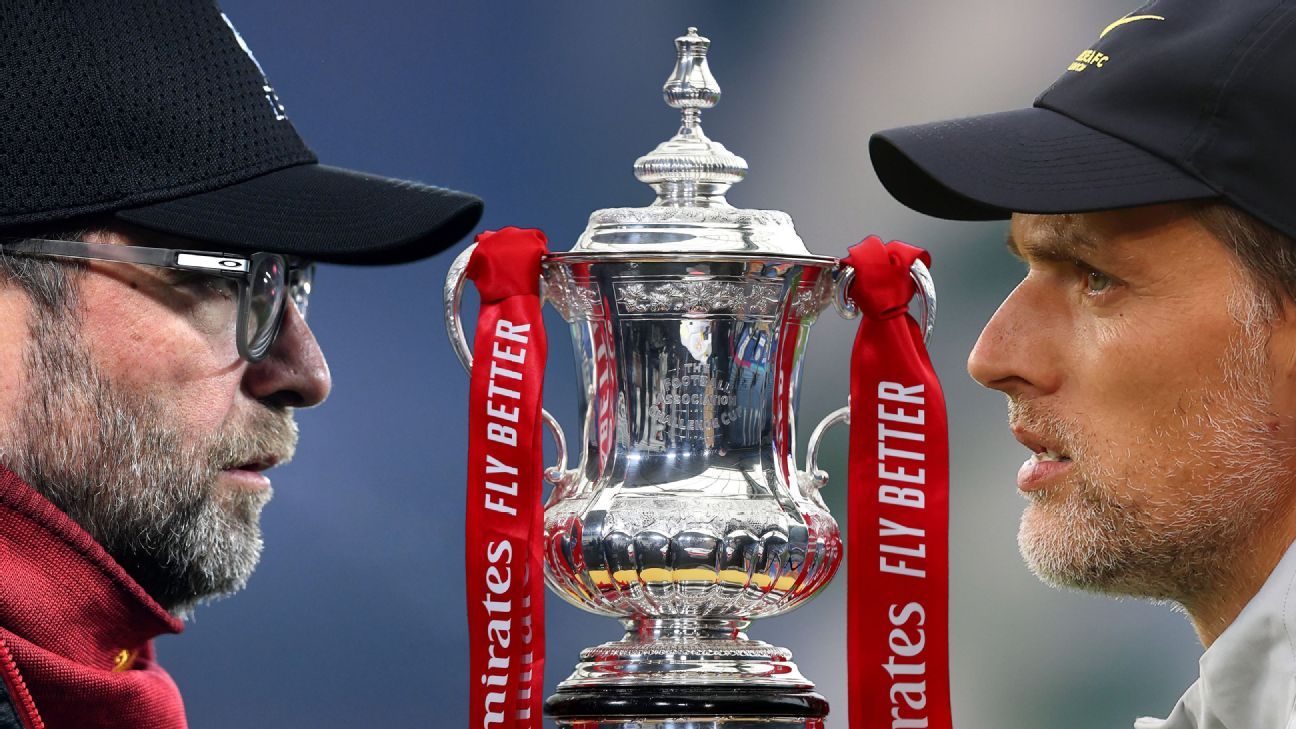 Top Premier League teams may only have to win six matches to lift the men’s FA Cup, but Saturday’s final (11:45 a.m. ET; stream live on ESPN+, U.S. only) will still feel like a marathon more than a sprint for Chelsea and Liverpool. This weekend’s fixture concludes the 150th edition of the world’s oldest cup competition, a milestone that the Royal Mint have deemed suitably grand to create a special £2 coin in celebration.

The outcome feels like a coin flip, too. Chelsea and Liverpool contested a hugely entertaining Carabao Cup final at Wembley just 76 days earlier, goalless at the end of 120 minutes and decided by the finest of margins — a penalty shootout ending 11-10 as Blues goalkeeper Kepa Arrizabalaga skied his spot-kick over the crossbar.

For Chelsea, this will be the 61st game of a grueling season that started with a UEFA Super Cup triumph in Belfast, continued with Club World Cup success in Abu Dhabi, and is now ending under sanction amid a dramatic takeover following the U,K, government’s decision to punish current owner Roman Abramovich for alleged ties to Russia President Vladimir Putin.

Blues head coach Thomas Tuchel has admitted his players are showing signs of fatigue after such a demanding campaign, and Jurgen Klopp can empathize; Saturday will be Liverpool’s 60th game of 2021-22, and both clubs will end on 63 matches as the Reds’ season ends in Paris with a Champions League final against Real Madrid on May 28.

Although Liverpool’s Premier League title hopes are beginning to fade as Manchester City continue winning in relentless fashion, Klopp’s side still have a chance of pulling off an unprecedented quadruple. The next leg can be secured at Wembley.

Who needs this more?

Given the history at stake, probably Liverpool. Klopp has sought to deflect any quadruple talk, but success in four competitions would elevate this Liverpool team to indisputable status as one of the greatest in English football history. It is, however, the prize they covet least given the Premier League and Champions League titles are still in play.

Tuchel will feel his players deserve something to show for the professionalism they have displayed while the club’s existence has felt uncertain. Abramovich issued his first statement attempting to distance himself from the club the night before the Carabao Cup final on Feb. 23. Ever since, Tuchel has had to field questions on everything from war to morality while maintaining morale among a group of players and staff facing restrictions over day-to-day operations resulting from the terms of a special government licence granted to keep fulfilling fixtures.

A consortium led by Los Angeles Dodgers part-owner Todd Boehly is now seeking U.K. government and Premier League approval to complete a takeover. Boehly is likely to be at Wembley on Saturday as Chelsea prepare for a new era. What better way to start than with the club’s ninth FA Cup win? For their part, Liverpool would move level with Chelsea on eight wins should they triumph.

Any injury issues to consider?

Saturday will be the fourth meeting between these sides this season, with the previous three encounters technically ending in draws, and Chelsea’s ability to compete with Liverpool has been based upon a high-pressing game housed in a 3-4-2-1 formation. It is for this reason, more than any other, that Tuchel will be tempted to restore Kai Havertz to lead the attack at the expense of Romelu Lukaku, who has started the past two Premier League games, scoring three times.

Lukaku caused Liverpool problems off the bench in the Carabao Cup final, and that “impact substitute” role could prove effective once again. Tuchel must decide whether Christian Pulisic, Timo Werner, or Hakim Ziyech play alongside Mount. Werner’s finishing is often in doubt, but his pace is not, and that speed will be a useful weapon against Liverpool’s high line.

The probable absence of Mateo Kovacic is a significant blow as Tuchel views his intelligence in possession as vital to Chelsea’s ability to dictate games. Kovacic spent Friday attempting to rejoin training following an ankle problem in a last-ditch attempt to be fit alongside N’Golo Kante, who has suffered a series of nagging muscular problems. There is a little more optimism surrounding Kante, and he is more likely to partner Jorginho in central midfield. If both Kovacic and Kante are deemed unavailable, Ruben Loftus-Cheek — who scored in Chelsea’s semifinal win over Crystal Palace — will be drafted in.

Jurgen Klopp made five changes for Tuesday’s win at Aston Villa and left-back Andrew Robertson is certain to be recalled, as is Mohamed Salah following his 18-minute cameo at Villa Park. No Liverpool player has scored more goals than Sadio Mane (12) since the beginning of February and so he will surely start, leaving Klopp with the decision of whether to pick livewire Luis Diaz, Diogo Jota, or Roberto Firmino as his third forward. In midfield, Fabinho will be a big miss after suffering a hamstring injury against Aston Villa on Tuesday, but he should be fit for the Champions League final at least.

Who are the key players?

Mason Mount has something to put right from the Carabao Cup final. Darren Walsh/Chelsea FC via Getty Images

Salah, Mane, and Diaz are all obvious threats for Liverpool but looking a little deeper, Chelsea’s Mason Mount will feel he has a particular point to prove. The 23-year-old was guilty of two bad misses in the Carabao Cup final either side of half-time, which would have turned a goalless game in the Blues’ favour.

Mount was in fine form with a goal and an assist in Wednesday’s 3-0 win at Leeds and although Tuchel will make changes to that XI, Mount is expected to retain his place. He’ll be looking for space in an area of the pitch that looks certain to be vacated by Fabinho.

Jordan Henderson replaced Fabinho at Villa Park and the England international will have a key role in stopping the supply line to Chelsea’s forwards while also helping Liverpool break the Blues’ press. Thiago Alcantara was one of those initially rested at Villa Park before coming on for Curtis Jones with the scores level against Villa and it was the Spaniard’s pass which launched the attack that led to Mane’s winning goal.

Thiago produced arguably his best performance for Liverpool in last month’s FA Cup semifinal win over Manchester City and will be desperate to play, having missed the Carabao Cup final after picking up a hamstring injury in the warm-up.

Gab & Juls debate who Thomas Tuchel should pick to face Liverpool in the FA Cup final.

This is the first time two German managers have contested an FA Cup final. It is the 19th meeting between the pair, with Klopp firmly in the ascendancy having won 10 and drawn five. Both are establishing themselves among the greats at their respective clubs, with Klopp becoming only the second Liverpool manager to lead a team into four major finals (League Cup, Europa League, Champions League and FA Cup) while Tuchel has achieved the same feat at Chelsea, something only previously done by Jose Mourinho.

Impressively, Tuchel’s success comes after just one year and 108 days as head coach. Chelsea have lost the past two FA Cup finals but only one of those came under Tuchel, as his predecessor Frank Lampard was beaten by Arsenal in an empty Wembley due to COVID-19 restrictions.

Klopp’s status as one of the game’s great modern-day managers is assured no matter the outcome, but for Tuchel, a victory would be a validation of his methods and a reminder ahead of what will be a busy transfer window at Stamford Bridge that Chelsea can still rival the best despite a change of ownership and a somewhat disappointing Premier League campaign.

It is difficult to see how this will lack goals like the Carabao Cup final did. Although Chelsea beat Leeds comfortably in midweek, their recent form is something of a concern. Liverpool’s superior options in attack should give them the advantage.

Previous post How much does it cost to get a window in your car replaced? Check it out | car window replacement cost

Next post Netflix tells ‘woke’ workers to quit if they are offended: ‘culture’ memo