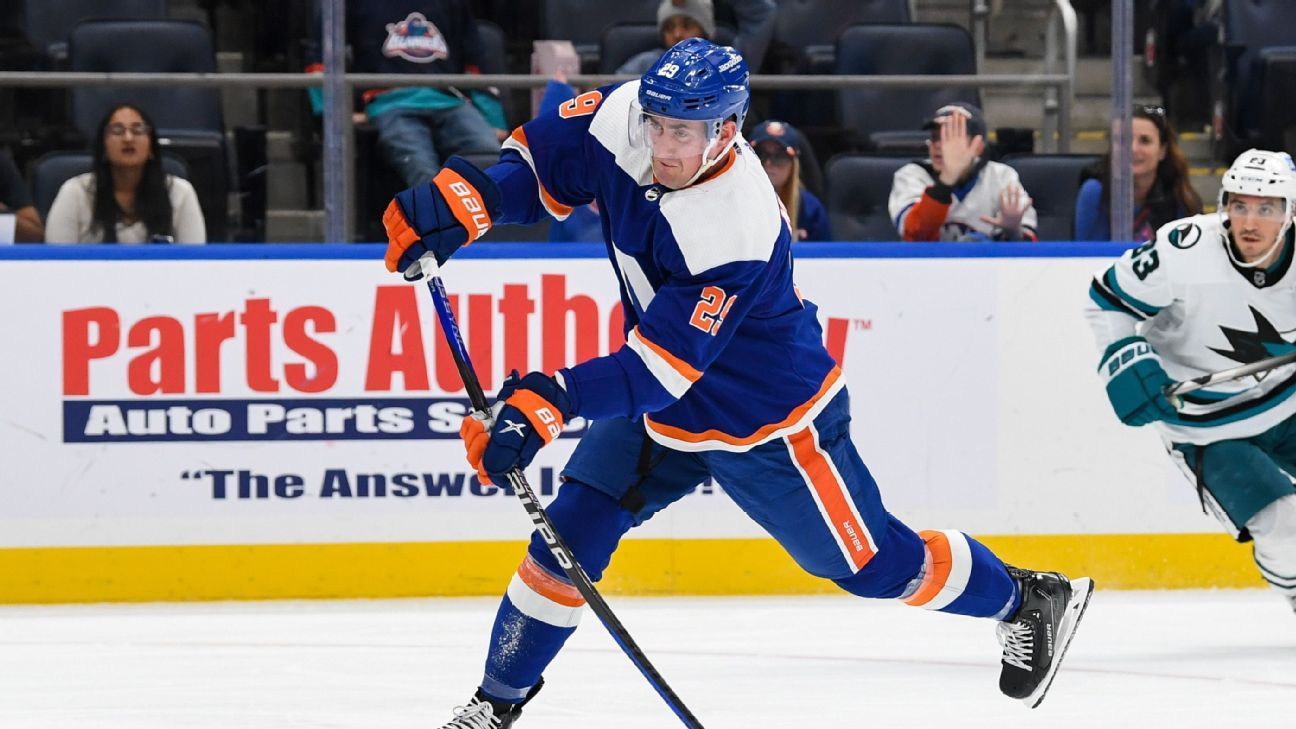 Plenty of legs will be fresh Saturday since the Toronto Maple Leafs and Pittsburgh Penguins were the only clubs to hit the ice Friday. Highlights of a busy 13-game slate include the seemingly undefeatable New Jersey Devils hosting the red-hot Arizona Coyotes. New Jersey’s third-stringer Akira Schmid could earn his first start for injured goalie Vitek Vanecek. In a preview of what many peg to be a potential Stanley Cup Final, the Carolina Hurricanes visit the Colorado Avalanche. No longer qualifying as a mid-tier fantasy asset, Martin Necas is a must-start against the Avs in Denver.

Elsewhere, without Evander Kane for the foreseeable future, Connor McDavid and the Edmonton Oilers will seek redemption against the Florida Panthers after falling 7-2 to the Hurricanes on Thursday. All eyes will be on whether Spencer Knight earns his third consecutive start after winning two straight, including a shutout. Claude Giroux’s Ottawa Senators will attempt to snap their seven-game losing streak in his old Philly stomping grounds against the Flyers. A tough task considering Carter Hart kept the Sens to a single goal last Saturday in Ottawa. But I like Giroux to make some fantasy noise in his former home, nonetheless.

Since Oct. 24, the Golden Knights have averaged 4.22 goals per game, winning all nine contests. During that same stretch, the (1-8-0) have surrendered 4.56 per contest. Jordan Binnington won his first in forever against the visiting San Jose Sharks on Thursday. I don’t like his odds of making it two straight against a sizzling Jack Eichel and the Knights in Vegas.

Before Thursday’s 5-2 win (including two empty-netters) over the Flyers, Columbus had conceded a total of 21 goals through four games, five of them allowed by Joonas Korpisalo in one Global Series match and Elvis Merzlikins responsible for the rest. Looking to rebound off Thursday’s 2-0 loss to the Coyotes, the Islanders are in a favorable position to spot a few goals past whoever is tending net for the porous Blue Jackets, including a red-hot Brock Nelson, Anders Lee, veteran Kyle Palmieri and defenseman Noah Dobson.

Choose your league size, customize the scoring and set the rules you want to follow in order to create the fantasy hockey league you want to play in.

Create your custom league for free!

Make sure to activate all your fantasy favorites from the home side in Toronto on Saturday. Between Thatcher Demko and Spencer Martin, the visiting Canucks have conceded 21 goals in their past five games. We could see a fair bit of scoring in this tilt. Vancouver’s skaters will try to provide Bruce Boudreau a win in his beloved hometown. Plus, either NHL newbie Keith Petruzzelli or Matt Murray is expected to start for Toronto in its second of a weekend back-to-back set.

Carter Verhaeghe, Florida Panthers (Rostered in 52.6% of ESPN.com leagues): What does the 27-year-old forward need to do to earn the fantasy respect he deserves? Apparently scoring six goals and six assists on 25 shots in eight games doesn’t suffice. For the love of cats, put Aleksander Barkov’s winger in your lineup against the generous Oilers on Saturday. Please.

Ilya Mikheyev, Vancouver Canucks (4.5%): The former Maple Leaf has four goals and three assists in his past seven games. I’m fairly certain the top-six winger would love to score a fifth in his first visit back to the only other city he’s represented in the NHL. So would Mikheyev’s fantasy managers.

Kirby Dach, Montreal Canadiens (14.2%): Here’s the version of Dach the Habs hoped they were trading for in early summer! Skating on a top line with Nick Suzuki and Cole Caufield, the former Blackhawk has three goals and six assists in his most recent half-dozen games. Nothing wrong with those numbers. The young forward is more than capable of scoring against the Penguins at the Bell Centre on Samedi.

Charlie McAvoy, Boston Bruins (75.9%): No, he doesn’t really qualify as a mid-tier defenseman, but the Bruins’ best remains not on the rosters of too great a percentage of ESPN.com fantasy leagues. Please make sure that isn’t the case in yours before Saturday’s tilt with the Sabres. In his first contest after shoulder surgery, McAvoy scored the game-winner against the visiting Flames on Thursday.

Caleb Jones, Chicago Blackhawks (3.0%): Shooting, blocking shots and logging assists (6), Jones is averaging 2.45 fantasy points per game since Oct. 25. That haul translates into some valuable scoring in Daily Fantasy competition as well. Seth’s younger sibling is expected to sub for his injured big bro on the Blackhawks’ top power play, particularly Saturday against the Ducks’ second-worst penalty kill in the league.

Jonathan Quick, Los Angeles Kings (37.6%): The Red Wings’ offense has leveled off a bit after a lively start to the season. Only the Blues and Blue Jackets have scored fewer goals since Oct. 24. The Kings’ No. 1 has won three straight, including this week’s 2-1 OT win with 31 saves against the Blackhawks and a shutout of Minnesota. Quick is clearly playing in fine form these days.

Jonathan Quick somehow stops the puck from going over the line and holds the Penguins to a 3-goal lead.

Tristan Jarry, Pittsburgh Penguins (92.4%): Projected to start the second of Pittsburgh’s Friday-Saturday back-to-backs, Jarry could be challenged often by a Montreal home side that has more pep in its scoring step of late. After winning his first four games of the season, Jarry has struggled mightily, allowing 19 total goals through his most recent four contests (all losses).

Jack Campbell, Edmonton Oilers (83.8%): Or Stuart Skinner. Whoever starts against the Panthers in Saturday’s matinee. Leave them on your fantasy bench.

The rested Stars could have their way with backup Felix Sandstrom and the Flyers after Travis Konecny and Co. play Ottawa on Saturday. To be clear though, my enthusiasm for Dallas’s fantasy stars wanes a little if somehow Carter Hart earns the start Sunday instead of versus the Senators 24 hours earlier.

David Rittich isn’t Connor Hellebuyck. The Jets’ No. 2 is forecast to start against a wily Seattle offense after Hellebuyck’s scheduled appearance Saturday in Calgary. We could see a few Kraken goals in that contest.