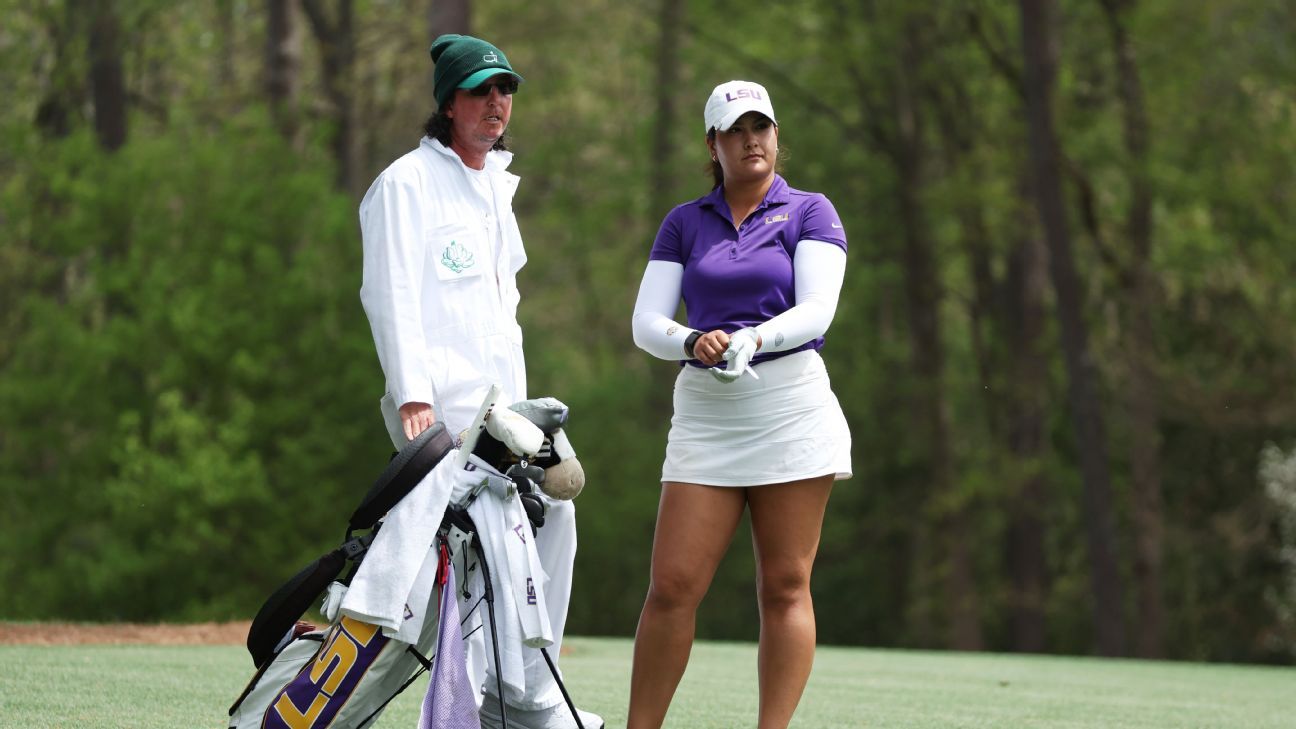 AUGUSTA, Ga. — Shortly after LSU junior Latanna Stone walked off the 18th green in the final round of the Augusta National Women’s Amateur on Saturday, Annika Sorenstam, a 10-time major championship winner, was waiting to hug her.

Anyone who was in arm’s length of Stone probably wanted to console her after she squandered a 2-shot lead in the final two holes Saturday, which allowed 16-year-old Anna Davis of Spring Valley, California, to win the third ANWA. Stone and LSU teammate Ingrid Lindblad finished in a tie for second place.

“It’s just heartbreaking,” Stone said. “I kind of knew where I stood on 17, and I was just thinking, par out. I just didn’t have the right club and kind of left myself with a difficult up-and-down [on 17]. I was trying to be aggressive and just kind of lost it. I thought I could get it back on 18, but I had a lot going on in my head with where I was at.”

A birdie on the par-3 16th gave Stone the 2-shot lead over Davis. Stone hit the middle of the fairway with her tee shot on the par-4 17th. Her ball was about 135 yards from the hole, on an uphill lie. She was between clubs and opted for a pitching wedge over a 9-iron. Her second shot came up short of the front bunker, leaving her a difficult pitch onto the green.

“I just knew I didn’t want to land in the bunker and [had to] hit it over,” Stone said.

Stone, from Riverview, Florida, chipped her ball about 40 feet past the hole. She was also aggressive with her first putt, knocking it past the hole. Then she missed a 6-footer for bogey. Her double-bogey 6 dropped her into a tie for the lead with Davis at 1 under.

Make your picks and compete for a chance to win $5,000! Make Your Picks

LSU coach Garrett Runion said chipping isn’t the strongest part of Stone’s game. But her shot from below the bunker on the 17th would be difficult for any player at Augusta National — even the world’s best playing in next week’s Masters.

“It’s got to be the largest crowd she’s ever played in front of and with everything on the line, I don’t want to speak for her, but I think there’s probably a lot of nerves going on,” Runion said.

Latanna Stone walked away disappointed with her finish after struggling on the final two holes at Augusta National. David Cannon/Getty Images

Still, even after Stone’s first big mistake of the round, all wasn’t lost heading into the par-4 18th. She could still win the tournament with a birdie. A par would put her into a playoff with Davis, who was already in the clubhouse with the only under-par score among the 30 players in the finals.

Stone pushed her tee shot into the trees down the right side of the 18th fairway. She punched out and her ball ended up short of the green. The chip-up settled about 12 feet from the hole. Needing a putt to force a playoff, she missed left and made bogey.

Stone received a loud ovation as she walked off the 18th green.

Michael Collins is back for an all-new season of America’s Caddie. He’ll take you inside the world of golf with exclusive looks at some of the top courses, feature stories, celebrity guests and interviews with the biggest stars in golf. Stream on ESPN+

“I’m really overwhelmed,” she said. “I wasn’t expecting that. That kind of really brought me to tears. I’ve never experienced quite a large crowd like that and have them support me. I’m going to cherish that forever. I’m going to remember walking down there and hearing my name and ‘Go Tigers!’ All of their support made me feel a lot better.”

Lindblad, from Sweden, watched her teammate’s late collapse on TV in the scoring room.

“It was harder to watch than to play,” Lindblad said. “I was so excited for her. You never know what’s going to happen those last two holes.”

Still, it was a thrilling week for Stone, who won the Women’s Orlando International in January. She has three top-10 finishes in eight starts for LSU this season.

Access 4,300+ hours of live coverage from 35 PGA TOUR tournaments each year, including 4 days of coverage at 28 events with four feeds each day. Plus, access replays, originals and more. Stream on ESPN+

“She’ll be a little bit upset at first, but then she’ll get over it and she’ll realize that it’s a learning experience for her,” her father, Michael Stone, said. “She’s going to grow and get stronger from it and build off of this. It’s golf. There’s only one winner and there’s always a bunch of losers. We’re OK with that.”

Runion said he hopes the experience will motivate Stone even more as the Tigers head into their postseason in a couple of weeks.

“I think she’ll take a lot of positives,” Runion said. “Deep down, it’s going to sting, but I think overall she’ll leave with the feeling that she had an unbelievable time and she got to play Augusta National. She played great. She was on TV. She had a lot of people watching. Life’s good. There could be worse things.”

Access 4,300+ hours of live coverage from 35 PGA TOUR tournaments each year, including 4 days of coverage at 28 events with four feeds each day. Plus, access replays, originals and more. Stream on ESPN+

As Stone talked with her parents and her caddie after the round, she began to wipe away tears. A man in a green jacket handed her a tissue.

“[I’ll] just put my arms around her, tell her I love her and that I’m proud of her,” Michael Stone said. “I don’t care if she came in first or 10th. I’m just glad she got the opportunity to play and experience the crowds and all of that stuff. It’s a good thing. We’re OK. We’ll come back next year — stronger.”

Previous post The dark matter of the brain: Electrical synapses – omnipresent and yet hardly explored