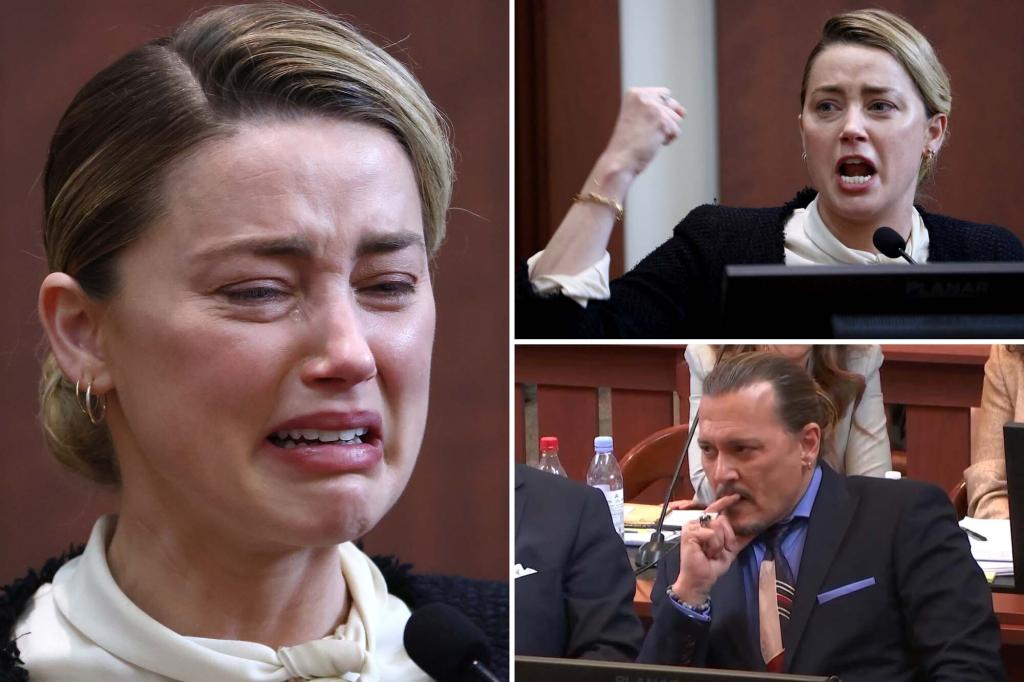 He starred in the 1990 smash “Cry-Baby” — but Johnny Depp’s die-hard supporters are accusing his ex-wife Amber Heard of being the one acting out an exaggerated emotional display.

Depp’s fans have been flooding social media, accusing Heard of being a “bad actress” and “fake crying” following her testimony at their blockbuster defamation trial this week.

Heard, 36, spent two days detailing Depp’s alleged abuse, saying her former spouse, 58, slapped her across the face and conducted a “cavity search,” reportedly believing she had hidden his cocaine in her vagina.

The “Aquaman” actress was often emotional as she answered questions about her turbulent marriage. Many viewers watching the televised trial became convinced of her authenticity, and #IStandWithAmberHeard started trending on Twitter Thursday afternoon. 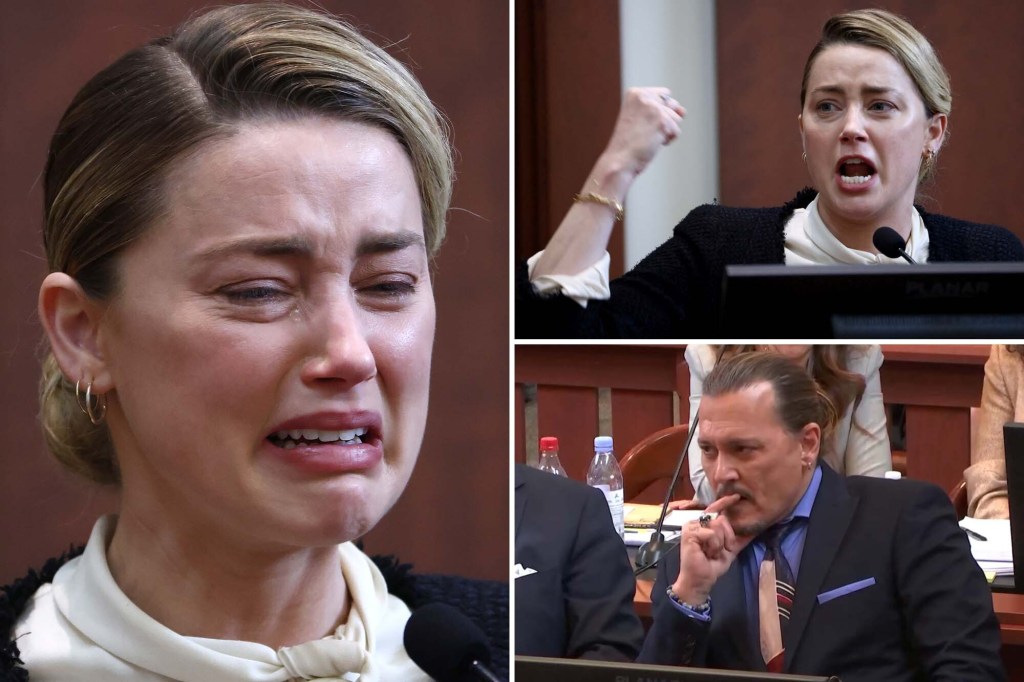 Johnny Depp’s fans have been flooding social media, accusing Heard of being a “bad actress” and “fake crying” following her testimony at their blockbuster defamation trial this week. AP

But Depp supporters have slammed the starlet on Twitter and TikTok, claiming she was faking her testimony because she failed to produce a single tear. 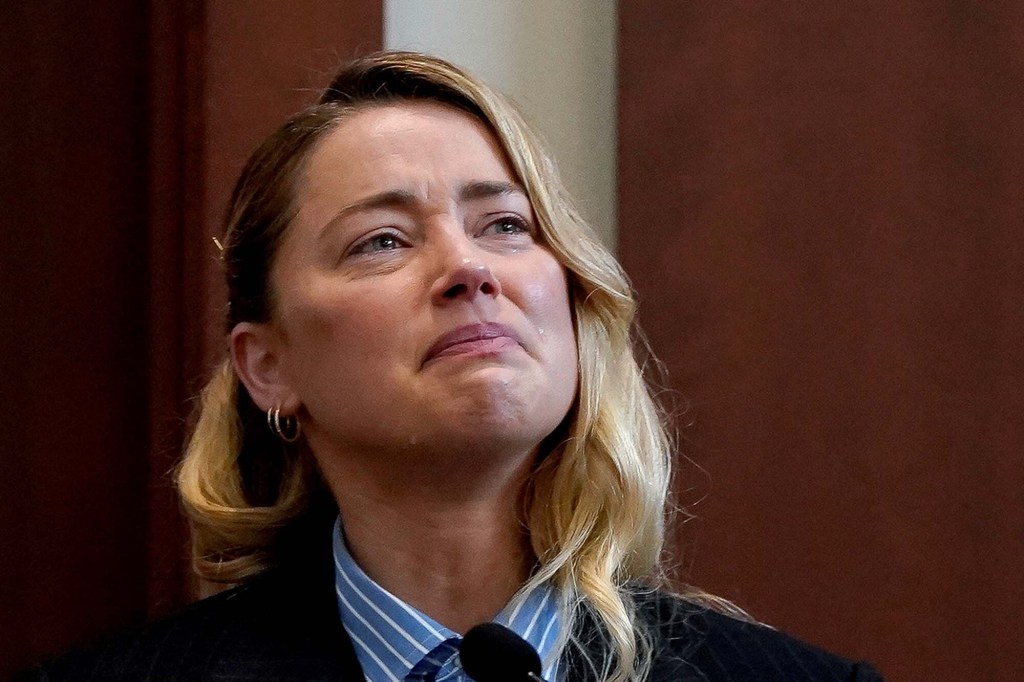 Amber Heard alleged that Johnny Depp performed a non-consensual “cavity search” on her while looking for cocaine.REUTERS

“OMG I’m DYING. Amber Heard is the worst actor EVER,” popular producer Andy Signore tweeted out to his 45,700 followers. “This fake incoherent PERFORMANCE is sickening… All over the place, too many details, fake sighs, forced tears and looks to the jury.. This is an EMBARASSMENT to survivors everywhere.”

“I watched a little of the Amber Heard testimony today. How does someone cry without tears? Is it a medical condition? Whenever I cry or see someone else crying, it’s a real mess that requires multiple tissues if not a small mop,” poet Joseph Massey posted.

Another accused Heard of putting on “the performance of her life.” 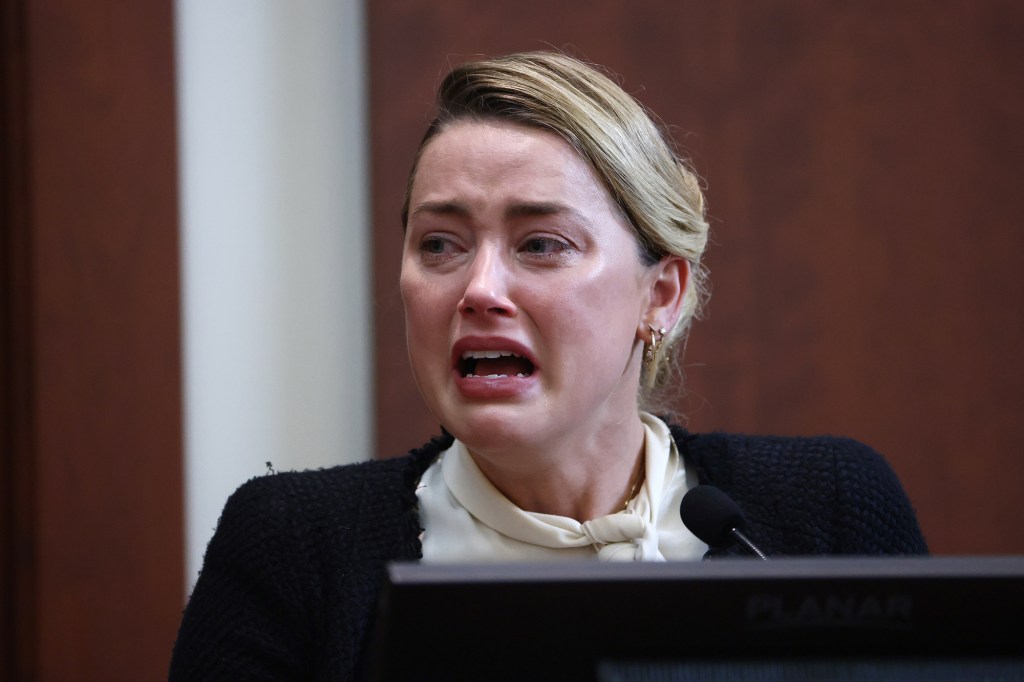 “This fake incoherent PERFORMANCE is sickening”: Twitter users didn’t hold back, accusing Heard of faking her testimony and her dramatic sobs.EPA

Meanwhile, on TikTok, videos accusing Heard of faking her “cringe” testimony have racked up millions of likes. Videos with the hashtag #JusticeForJohnny have been viewed a staggering 8.3 billion times.

One viral video, which shows Heard breaking down on the stand, was accompanied by a voiceover of Kim Kardashian, saying: “Ew, this is so cringe. Guilty.” It garnered more than 5.2 million likes.

Elsewhere, aspiring actress Meredith Bull created a clip that clocked more than 201,200 likes, saying she was skeptical of Heard’s testimony as a fellow thespian.

The latest from the Johnny Depp defamation trial:

“What I saw today was massive performance to the jury,” Bull declared, adding that she felt Heard was trying to make eye contact with each juror.

“I don’t know about you, but anytime that I recall trauma I am not trying to see if every person is trying to make eye contact with me,” she continued. “If anything, I’m probably shying away from eye contact because it’s such a vulnerable, personal moment, especially [with] what she was talking about which was abuse and domestic violence and all sorts of crazy stuff.” 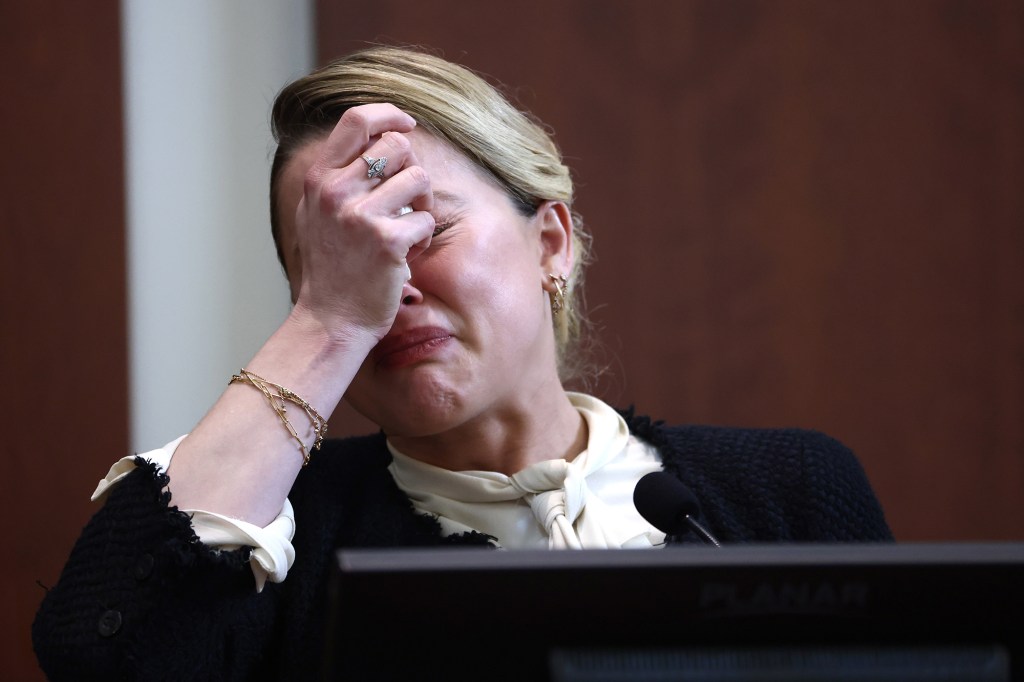 “The fact that she is an actress makes the read highly difficult:” Body language expert said it was difficult to get a proper read on Heard, given that she was a professional performer. EPA

However, body language Patti Wood told The Post that Heard may have been coached by her lawyers to make eye contact with the jurors.

“Eye contact creates connection and more empathy,” Wood stated, adding that she believed Heard wore her hair tied back so that her “emotional state was more viewable and more obvious” to those in the courtroom.

“The fact that she is an actress makes the read highly difficult,” Wood declared, saying that Heard’s testimony could have been performative even while saying things that were completely true. 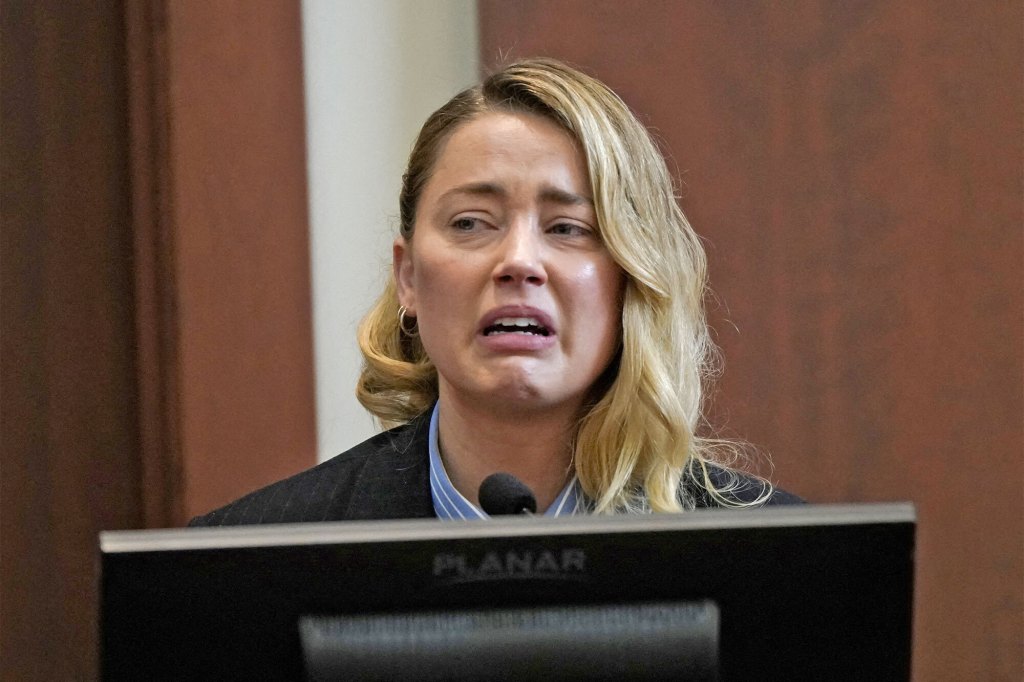 Heard has been the subject of intense hatred on Twitter and TikTok, with Johnny Depp super fans smearing her name.

Wood says that when Heard recalled instances of assault, “there was a consistency between her words and her body language” that felt “believable.”

However, the body language expert admitted that Heard’s crying appeared “effortful” and that she “seemed to be wiping at her face when there were no tears.”

“What makes this trial so captivating is that it doesn’t fit the baseline of our normal viewing,” she stated. “It’s not clear-cut that he is a victim and she is the assaulter. They both have this strength and power about them.” 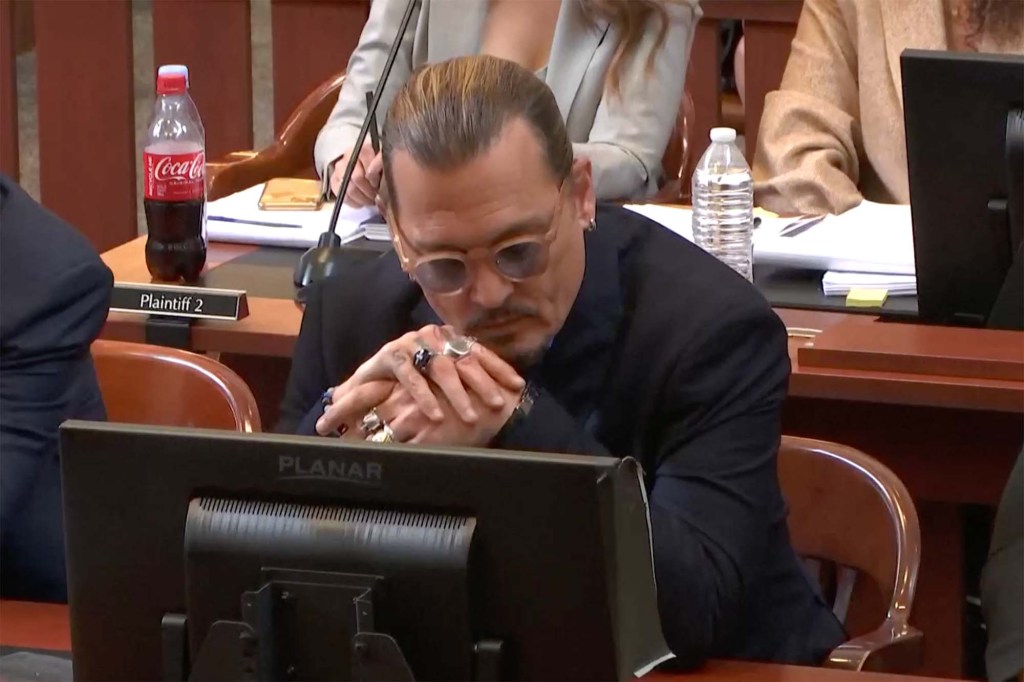 Depp is seen in court this week. The actor’s legal team is set to cross-examine Heard when the trial resumes on May 16.

Meanwhile, both Depp and Heard’s reps fired off at each other in statements released on Friday.

“As Mr. Depp’s counsel correctly predicted in their opening statements last month, Ms. Heard did indeed deliver ‘the performance of her life’ in her direct examination,” a spokesperson for Depp said. “His truth — the truth — is the same no matter the environment in which it has been presented.”

Meanwhile, Heard’s rep responded directly, stating: “As evidenced by the statement just released, Mr. Depp’s defamation claim is falling apart so rapidly that his counsel are turning from prosecutor to persecutor.”

“They boast that Mr. Depp’s story has not changed,” they witheringly continued. “If so, since he lost the domestic violence restraining order and he resoundingly lost the libel case in the UK, perhaps he should consider a new strategy rather than the recycled approach of attacking the victim and refusing to take responsibility for his own conduct.” 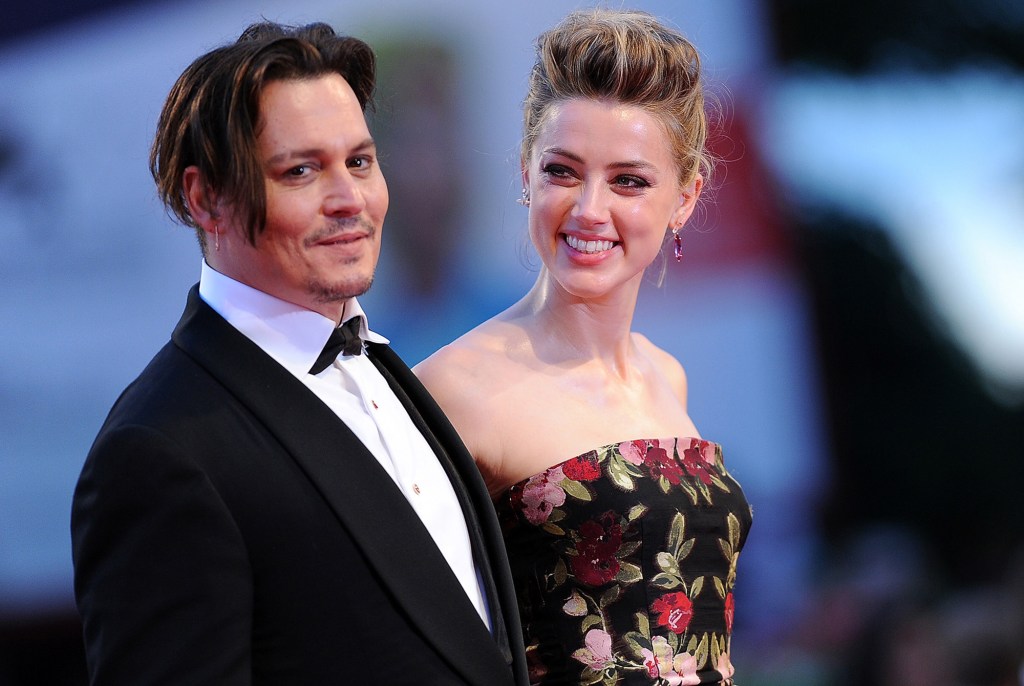 Depp and Heard began dating in 2012 and were married in February 2015. Here, they are pictured together that year.

Depp is suing Heard for defamation over a 2018 Washington Post op-ed that the “Aquaman” star wrote, in which she said she was a victim of sexual violence.

She did not specifically name Depp in the article, but it was written after Heard filed for a restraining order against her ex-husband in 2016 over abuse allegations.

Depp is seeking $50 million in damages. Heard has filed a $100 million countersuit.

The trial is currently on break until May 16, upon which date Heard will be cross-examined by Depp’s team.