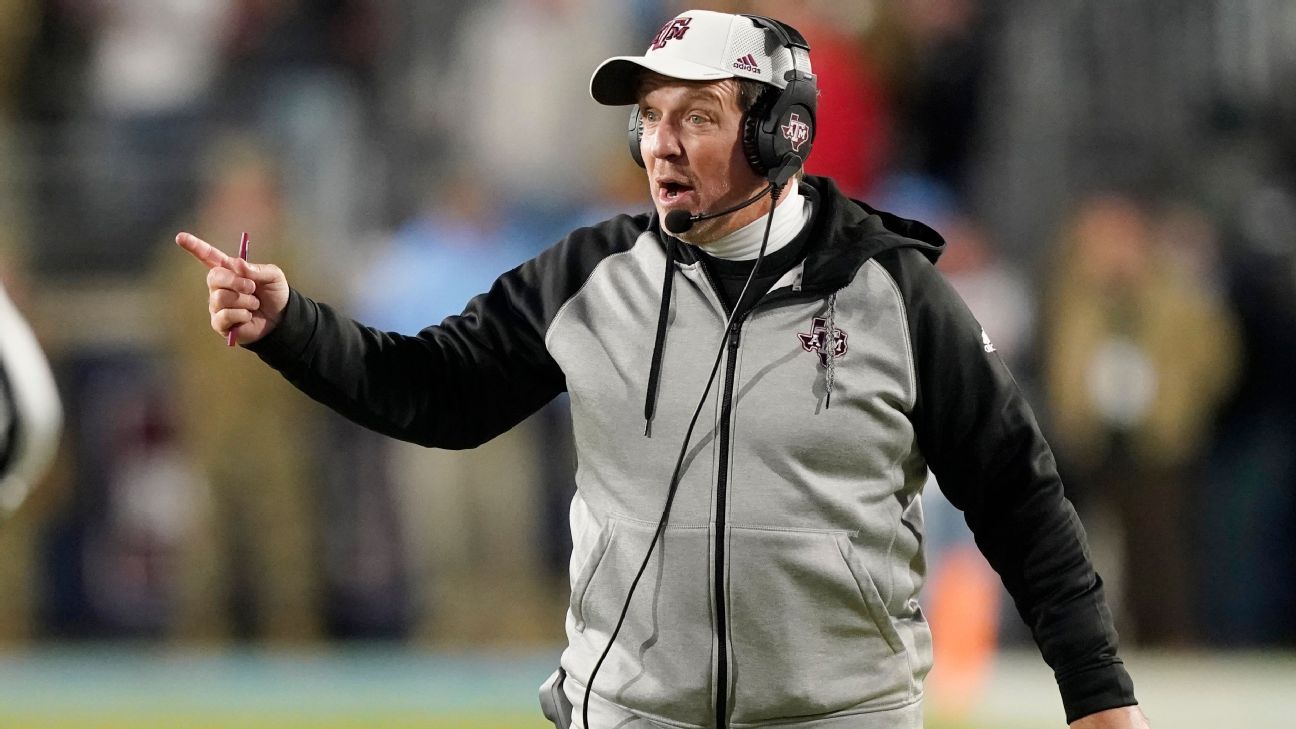 Fisher, who was visibly angry, said there was no truth to Saban’s accusations.

“It’s despicable that a reputable head coach can come out and say this when he doesn’t get his way,” Fisher said. “The narcissist in him doesn’t allow those things to happen. It’s ridiculous when he’s not on top.”

Texas A&M signed five five-star prospects in the 2022 ESPN300, with 20 of them ranked in the top 150. The class is widely considered the top-rated group in the modern era of recruiting rankings. Fisher, who served as Saban’s offensive coordinator and quarterbacks coach at LSU from 2000 to 2004, cast accusations of his own against Saban.

“Some people think they’re God,” Fisher said. “Go dig into how God did his deal. You may find out … a lot of things you don’t want to know. We build him up to be the czar of football. Go dig into his past, or anybody’s that’s ever coached with him. You can find out anything you want to find out, what he does and how he does it. It’s despicable.”

Saban said Wednesday night that Alabama players made $3 million “doing it the right way” last year and that only 25 players were able to leverage name, image and likeness opportunities.

“I mean, we were second in recruiting last year,” Saban told a group of local business leaders. “A&M was first. A&M bought every player on their team — made a deal for name, image, likeness. We didn’t buy one player, all right? But I don’t know if we’re going to be able to sustain that in the future because more and more people are doing it. It’s tough.”

Saban also singled out Jackson State in his comments, saying the school paid Travis Hunter, a five-star prospect who flipped his commitment from Florida State and signed with the HBCU program during the early signing period in December, $1 million to join the program. Jackson State coach Deion Sanders denied the rumor that Hunter had been offered more than $1 million.

In an interview with Andscape on Thursday, Sanders dismissed the notion of Hunter earning that amount of money.

Fisher said during his news conference: “What’s funny, in that talk, right before he said that about us? Wasn’t he soliciting funds from the crowd?” he said. “It’s amazing, isn’t it? When you walk on water, I guess it don’t matter.”

Saban told ESPN on Thursday that he reached out to Fisher and Sanders wanting to apologize for mentioning their specific schools and for any suggestion that they were cheating to get players. But Saban didn’t back down from his stance that paying high school players under the guise of NIL to attend a certain school was bad for college sports.

“Look, I should have never singled anybody out, and I wasn’t saying that either one of those schools did anything wrong,” Saban told ESPN. “I didn’t intend it to mean they were buying players, but more that you’re able to buy players now and it’s totally legal. You’re just using name, image and likeness to do it. What I’m saying is that it’s not good for the game and is only going to get worse unless there’s some federal legislation.”

Fisher said Saban had called him but he hasn’t answered.

“Not going to. We’re done,” said Fisher, contrasting his time with Saban and his time as an assistant at Florida State under Bobby Bowden before taking over as the Seminoles’ head coach. “He’s the greatest ever, huh? When you’ve got all the advantages, it’s easy. … You coach with people like Bobby Bowden and learn how to do things. You coach with other people and learn how not to do things. There’s a reason, people, I ain’t back and worked for [Saban]. Don’t want to be associated with him.

“You can call me anything you want to call me. You can’t call me a cheat. I don’t cheat and I don’t lie. I learned that when I was a kid. If you did, your old man slapped you upside the head. Maybe somebody should have slapped him.”

Texas A&M athletic director Ross Bjork told ESPN he learned of Saban’s comments late Wednesday night and spoke with Fisher about it first thing on Thursday morning. Bjork said he supports Fisher and backs his comments because “this was personal.”

“We’re being accused of using NIL to induce players, which is against the NCAA rules, which is against the Texas state law,” Bjork told ESPN. “So that’s why we’re so defensive, is because we’re not being accused of having all of our players on our roster having NIL, which is all permissible. It’s, ‘Oh, there’s only one reason why they’re doing this.’ That’s the part where Jimbo is emotional and personal because he knows how hard he works, the staff works, how great of a place A&M is. That’s where it’s really sad in a lot of ways, that we’re to this point.”

Bjork said he hasn’t talked to anyone at Alabama and doesn’t know what this exchange will mean for the Aggies’ relationship with the Crimson Tide going forward.

SEC commissioner Greg Sankey on Thursday issued public reprimands to both Fisher and Saban for violating the conferences rules of “ethical conduct” and specifically for “public criticism” of another member school, according to a statement.

“The membership of the Southeastern Conference has established expectations for conduct and sportsmanship that were not met last night nor today,” Sankey said in the statement. “A hallmark of the SEC is intense competition within an environment of collaboration. Public criticism of any kind does not resolve issues and creates a distraction from seeking solutions for the issues facing college athletics today. There is tremendous frustration concerning the absence of consistent rules from state to state related to name, image and likeness. We need to work together to find solutions and that will be our focus at the upcoming SEC Spring Meetings.”

Fisher was asked whether it will be awkward seeing Saban next week in Destin, Florida, at SEC spring meetings or playing Alabama on Oct. 8 in Tuscaloosa.

“Awkward about what?” Fisher said. “I don’t mind confrontation. Lived with it my whole life. Kind of like it myself. Backing away from it wasn’t the way I was raised.”

Saban said Thursday he wasn’t interested in engaging in a verbal spat with Fisher.

“Jimbo can say what he wants to say,” Saban said. “We’ve known each other for a long time. He worked for me and is a very good coach. As I said, it wasn’t my intention to single anybody out, but I don’t take things personally. Some people, when they compete against each other, everything’s personal. It’s never been that way for me. Bill Belichick and I are best friends. We were in the same division for two years [in the NFL] when I was in Miami and never had an issue.”

Saban said he had several football and basketball coaches who called him after his comments on Wednesday and told him they agreed with him.

“I’m not against NIL. I’m against bidding for high school players. I’m against attorneys, collectives and others getting between the money and the players,” Saban said. “Is that really what we want it to be in college football?”

Thursday’s news conference was reminiscent of Fisher’s defense on signing day in February when Fisher went after an anonymous message board poster who used the handle “Sliced Bread” for claims that the Aggies had $30 million at their disposal in name, image and likeness funds, calling it a “joke.”

Fisher said the claim was amplified by the media, a Notre Dame administrator and fellow SEC coaches for spreading rumors about deals promised to recruits, saying it was “insulting” and “irresponsible.” Ole Miss coach Lane Kiffin said, “I joked the other day, ‘Are they going to implement a luxury tax on Texas and Texas A&M?’ I mean, what they are paying the players is unbelievable, but it’s legal.”

On Thursday, Fisher lamented the need to continually defend his class: “It’s disgusting what we’re into right now,” he said. “Especially by the people … throwing the darts who have no glass in their house. It’s despicable for what it does for the sport.”

Fisher hinted that Saban’s comments this offseason about his hopes that parity can return to college football were hypocritical based on the way he ran his own program with a huge staff of off-field analysts.

“The operations, the way things were done the other way when the ‘parity’ was there?” Fisher asked. “Never had been parity. Certain people never follow the rules anyway.”

Obviously, there’s going to be a lot of chatter between now and Oct. 8, when Fisher and Saban meet.

“You know exactly what he’s about. My dad always told me this: When people show you who they are, believe them. He’s showing you who he is.”

ESPN’s Heather Dinich and Chris Low contributed to this report.