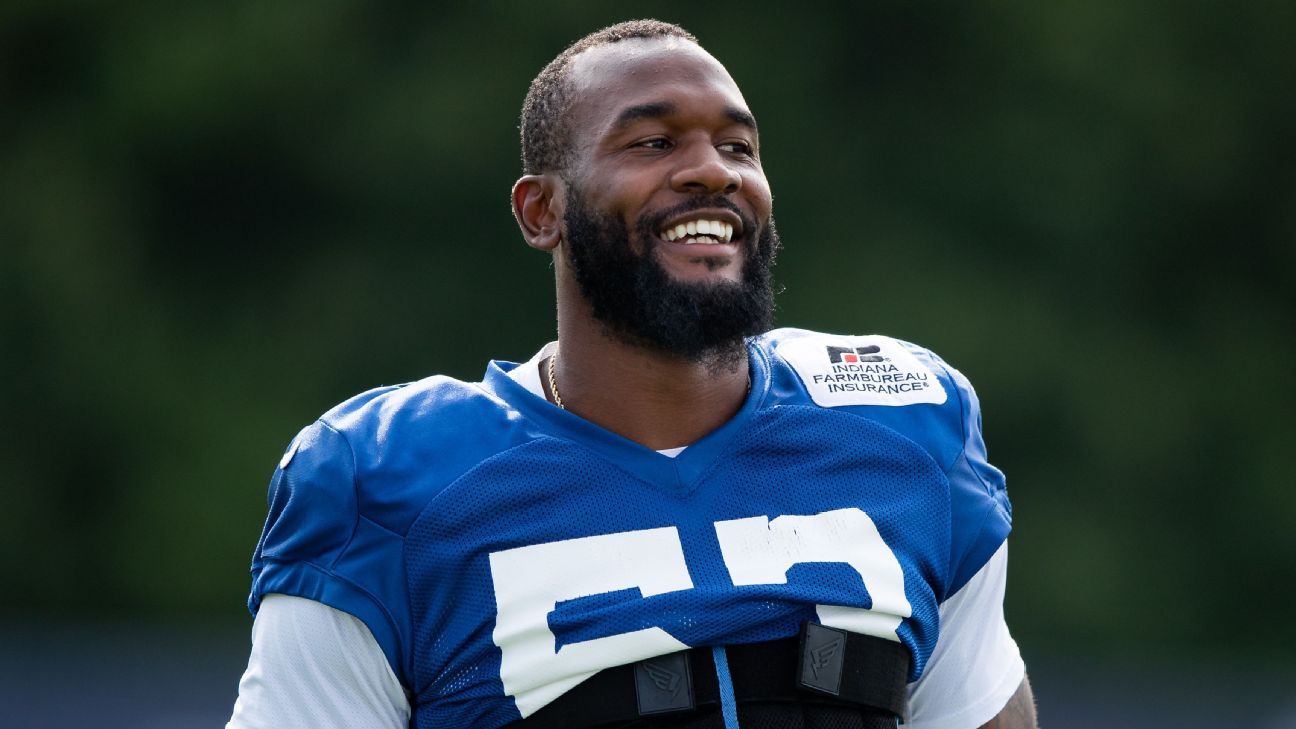 INDIANAPOLIS — Darius Leonard was in a dark place late last season, as what had been a promising Indianapolis Colts season was collapsing around the linebacker and the rest of the organization.

An ankle injury that bothered him nonstop. Family members dealing with health issues. COVID-19 hitting key members of the team, including himself. And to cap things off, the Colts’ playoff aspirations came to a screeching halt with a Week 18 loss to the Jacksonville Jaguars, who finished with the league’s worst record despite the win. That season-ending loss had owner Jim Irsay fuming during the game, on the plane ride home and inside the team facility when he returned.

Some four-plus months later, Leonard, who often tries to keep his best game face on in front of the camera, acknowledged things weren’t right with him last season.

“I fell out of love with the game,” Leonard said. “I wasn’t enjoying it anymore.”

That’s something nobody would have ever imagined coming out of Leonard’s mouth. Not the same Darius Leonard who uses every kind of negativity as a motivation when he was making countless tackles, intercepting passes or attacking like Mike Tyson when he punches the ball out of opponents’ hands for a forced fumble.

But that’s how Leonard felt after the Colts couldn’t beat the Jaguars in a game in which the defense had no answers for rookie Trevor Lawrence and Jacksonville’s offense in Week 18.

“The first month, I didn’t wanna go home, didn’t wanna be around anybody, didn’t wanna face it yet,” Leonard said. “Because the question was gonna come: What the hell happened in Jacksonville? And in that moment, I really didn’t know what happened.”

Indianapolis Colts linebacker Darius Leonard is back to his old self now after saying, “I fell out of love with the game” following the rough ending to the 2021 season. Zach Bolinger/Icon Sportswire

Leonard never thought he would need to step away — not when there was a point in the season when the Colts were one of the hottest teams in the NFL and had some pundits calling them contenders in the AFC.

Even Leonard, who faced adversity throughout his life, was beaten up mentally and physically over what ended up being the most trying season of his four-year NFL career, which includes being named a first-team All-Pro three times.

“You hold in all your emotions,” Leonard said. “You put a smile on so many other people’s faces, and the time that you need it — a lot of people who are around you, they see you smile all the time; they don’t understand that just because I smile sometimes, I ask everybody how they’re doing — sometimes it’s OK to ask me how am I doing?

“Ask and truly have a conversation with me and understand that I’m human, too. I have problems. I go through a lot of things that a lot of people are going through. … You sit here and you feel like you have to hold a shade up with your personal life because your football life eats you up, and I just wasn’t in a good mental place because I wouldn’t be around my family whenever they needed it.”

The Colts’ linebackers are one of the closest groups on the roster. Fellow starters Zaire Franklin and Bobby Okereke knew what Leonard had gone through the past few months.

“The way the season ended kind of broke all of our hearts in different ways, and I would say that we all have to go through our own kind of healing process to get back rolling,” Franklin said. “For me, it was a lot different … I can see what Darius went through.

“That’s good for him, somebody who dedicates so much to the game and works so hard at it. A lot of times you need that time to step away from ball, be with family, get a perspective of the world. I definitely feel like he’s in a better spirit this year. I tell [Leonard] all the time, I’m always there to support him, always have his back no matter what.”

Leonard is back, he says he’s healthy, and the defense has brought in significant additions in cornerback Stephon Gilmore (the NFL Defensive Player of the Year in 2019), defensive end Yannick Ngakoue and coordinator Gus Bradley, who replaced Matt Eberflus after he left to coach the Chicago Bears.

“Made me happy, especially with the rush, helping [DeForest Buckner] and [Kwity Paye], adding [Ngakoue] and a shutdown corner in Gilmore,” Leonard said. “You think about all the takeaways we’re going to have. Stephon is great at tracking the ball. It’s a better opportunity for us to get more takeaways. … We have to have 40-plus takeaways in the season.”

Next post Maye Musk makes SI Swim history as oldest cover girl at 74: ‘I felt like a teenager’