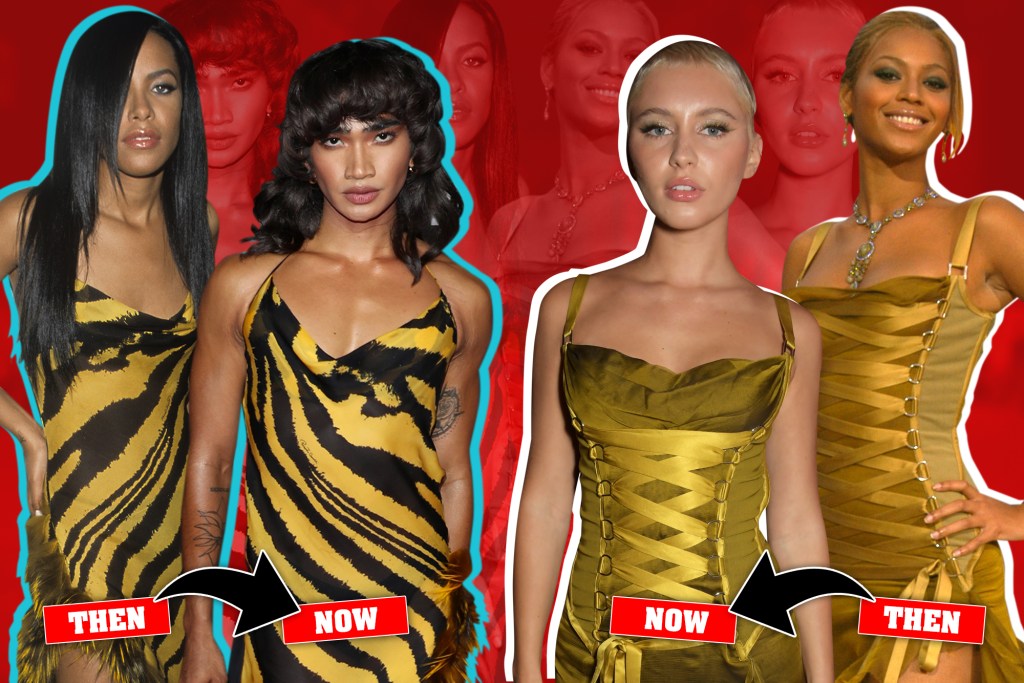 In the world of fashion, imitation isn’t just the sincerest form of flattery — it’s also the fastest route to front-page fame.

But whether reviving old looks is about paying respect to fashion’s foremothers or shamelessly chasing clout is anybody’s guess.

“For a lot of up-and-coming A-listers, rewearing vintage celebrity couture is a cool opportunity to pay homage to the powerful women who rocked these memorable red-carpet moments,” author, fashion editor and stylist Caroline Vazzana, 29, told The Post.

At the same time, “stars on the rise know that reviving iconic couture is going to create major media buzz for them,” the NYC-based social media star added. “After a girl is seen wearing a Beyoncé dress, the world is going to be looking at her for what she’ll wear next and how she’ll put her spin on another celebrity’s legendary look.”

Here’s how today’s It girls are resurrecting some of the red carpet’s greatest hits.

Getting buzz in a Beyoncé redo 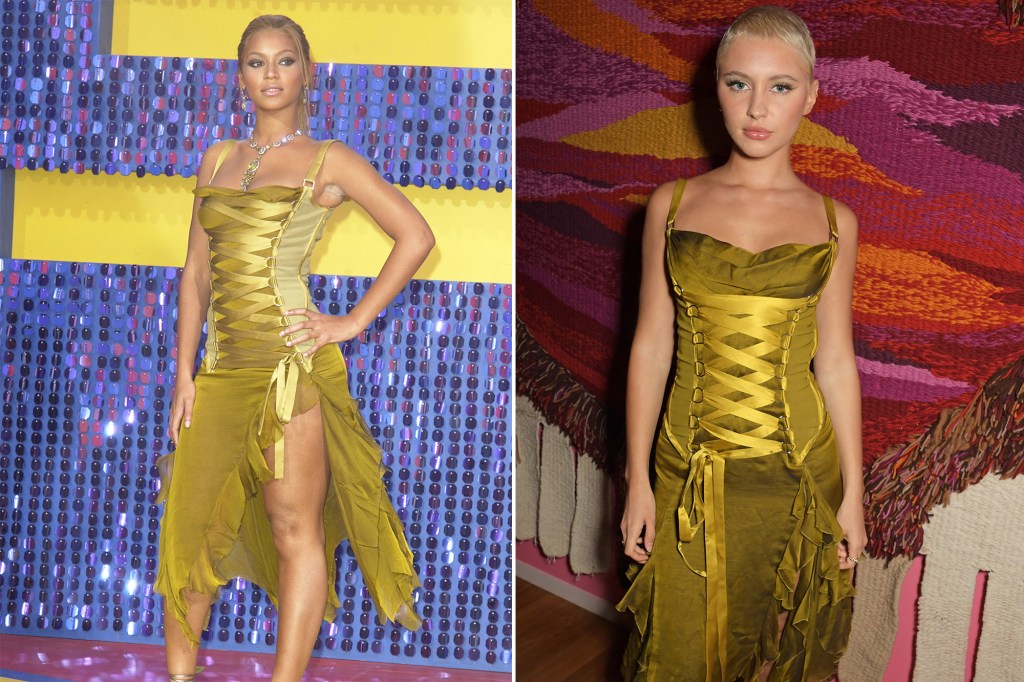 Raiding Beyoncé’s closet is a bold move. But catwalk newcomer Iris Law dared to dazzle London fashion week in Queen Bey’s 2003 corseted Versace dress nonetheless. “Iris and her team really put her out there in a very vulnerable way, because Beyoncé’s Beyhive fan base can be very particular about how [Beyoncé’s legacy] is upheld,” Vazzana said, laughing. “Beyoncé is Beyoncé. So wearing anything that she wore is going to get a lot of publicity, good or bad.” 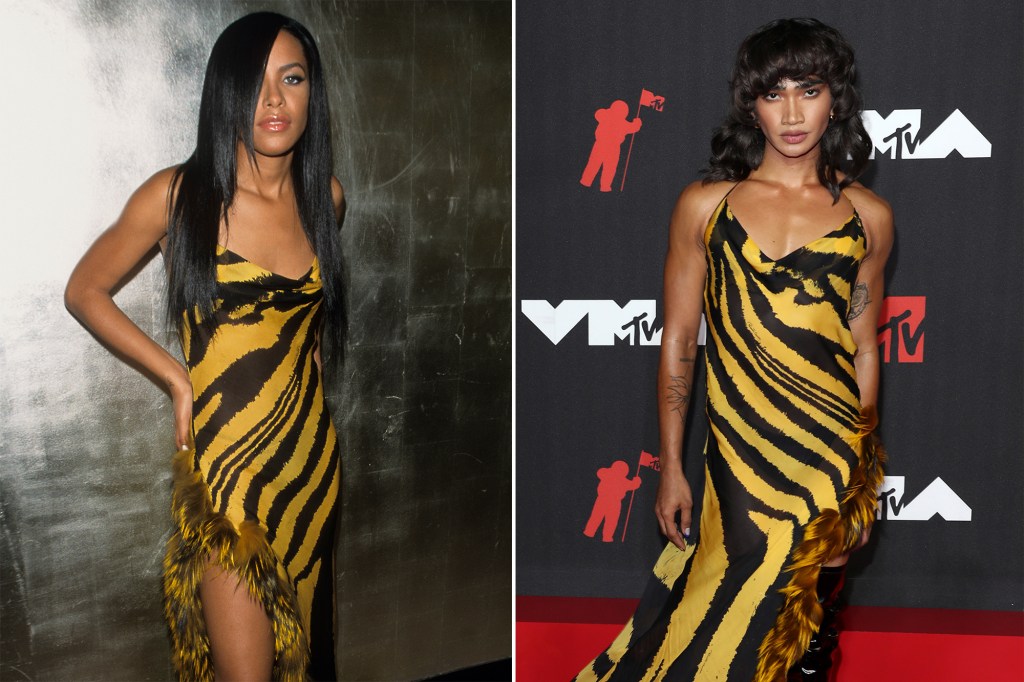 The spirit of late R&B luminary Aaliyah — who met her untimely end at 22 in a 2001 plane crash — was palpable at the 2021 MTV Video Music Awards. And that was all thanks to YouTube makeup and face-contouring diva Bretman Rock, 23, who wowed at the event in the same yellow tiger-striped Roberto Cavalli dress that the “Try Again” chanteuse rocked on the VMAs red carpet in 2000. “I think Bretman had nothing but good intentions here. It was a unique way to keep her memory alive, and that’s a beautiful thing,” Vazzana said. 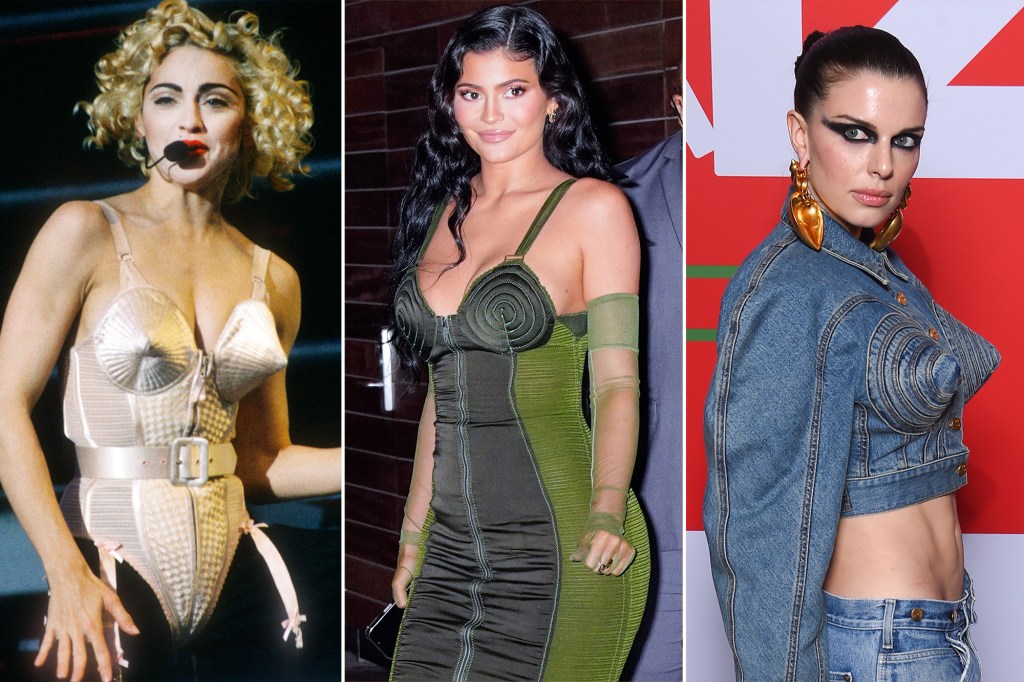 At the peak of her career, Madonna’s style was on point. And the satin, bust-accentuating Jean Paul Gaultier cone bra that the now-63-year-old pop idol wore on her Blond Ambition world tour in the spring of 1990 was the standout of her wardrobe. Which is why Vazzana said that Julia Fox’s denim-sewn take on the look at Paris fashion week “should not have been [done] … The Madonna cone bra is such an iconic moment, and even though Julia looks really cool, this is a look that should be exclusive to Madonna.” On the other hand, Jenner — who tried out the style at the New School’s Parsons Benefit in June — gave fans “a much more subtle nod to Madonna’s fashion influence, rather than an outright copy,” Vazzana said. “Kylie’s [bust isn’t] as pronounced. And that modification honors Madonna’s signature style as the inspiration for this more modern interpretation of a similar design.” 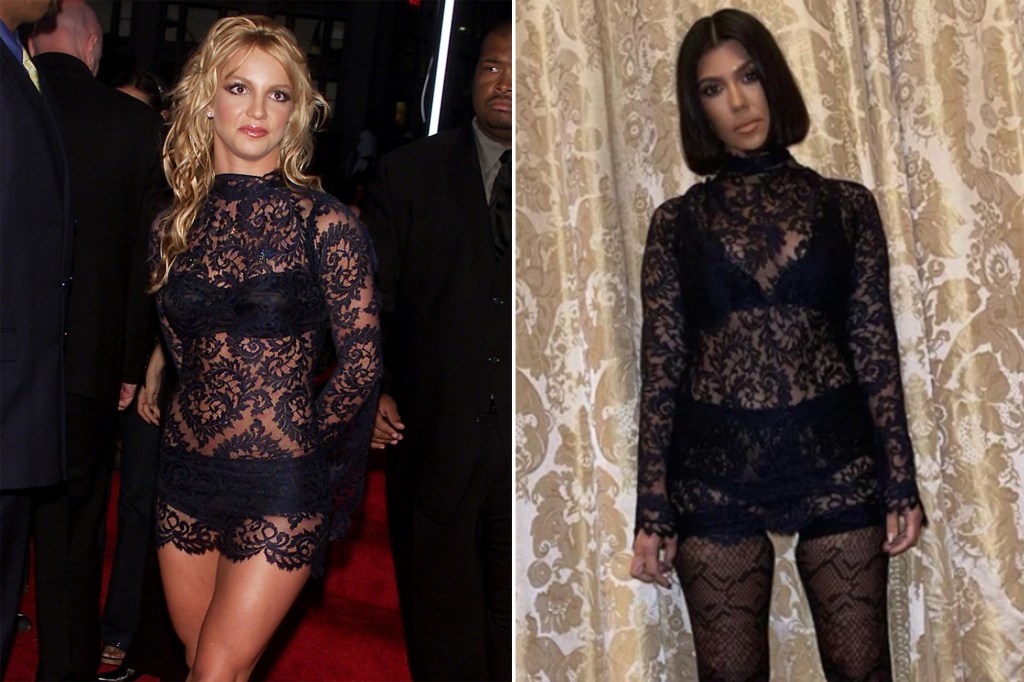 Kourtney Kardashian (left) sported a black sheer look that was similar to the one Britney Spears (right) wore on the red carpet in 2001.Evan Agostini/ImageDirect; kourtneykardash/Instagram

A demonstration of solidarity — or a shameless grab for the spotlight? In September, Kourtney Kardashian, 42, slipped into a lacy black minidress reminiscent of the sheer piece Spears, 40, memorably wore for the red carpet of the 2001 MTV VMAs (an outfit the singer called “one of my favorite dresses I’ve ever worn”). Kardashian’s move came at the height of the #FreeBritney movement, as the singer fought to win back control of her life and end her conservatorship. But, as in most revived fashion moments, choices like this are a “risk,” Vazzana said, because of the different ways the meaning behind the look could be interpreted. “In this case,” she added, “Kourtney was definitely making an honorable nod to Britney, but of course knew she’d get [a lot of] attention doing so.” 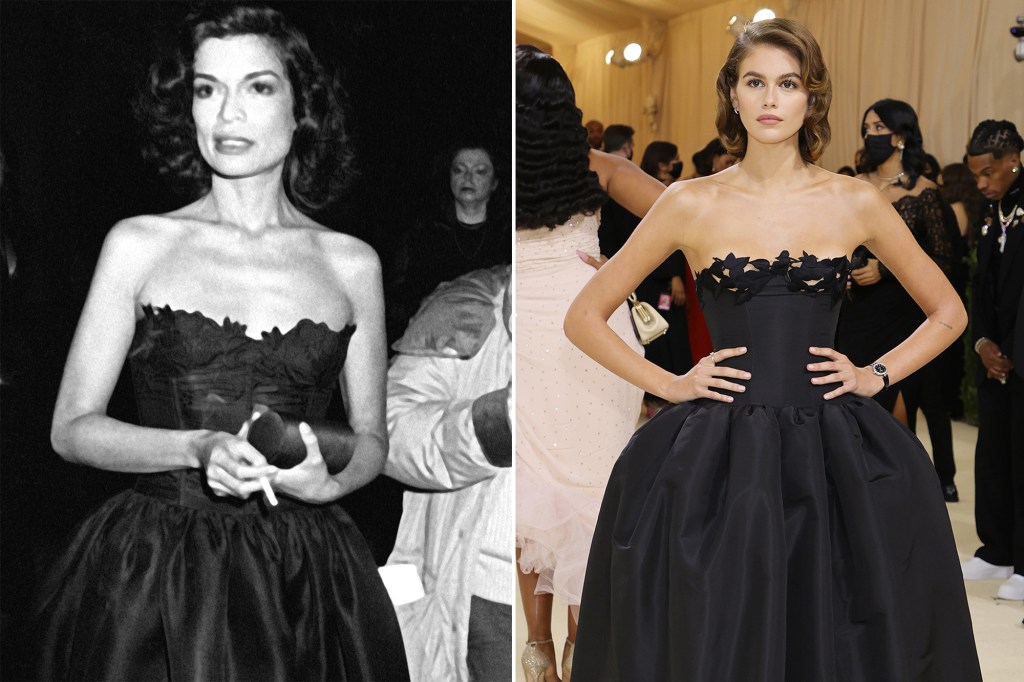 Kaia Gerber, 20, has got moves like Jagger — the rocker’s former wife Bianca Jagger, 76, to be exact. At the 2021 Met Gala, the ravishing daughter of runway legend Cindy Crawford channeled the Studio 54 mainstay’s Halston gown she wore to the 1981 Met Gala with a similar Oscar de la Renta masterpiece. Vazzana said this was a shrewd move for Gerber. “This revived look for Kaia wasn’t about clout. It was about showing the world that she’s not a little kid anymore and she’s not just Cindy Crawford’s daughter,” Vazzana said. “Channeling Bianca was her chic way of establishing herself as a fearless fashion go-getter.”