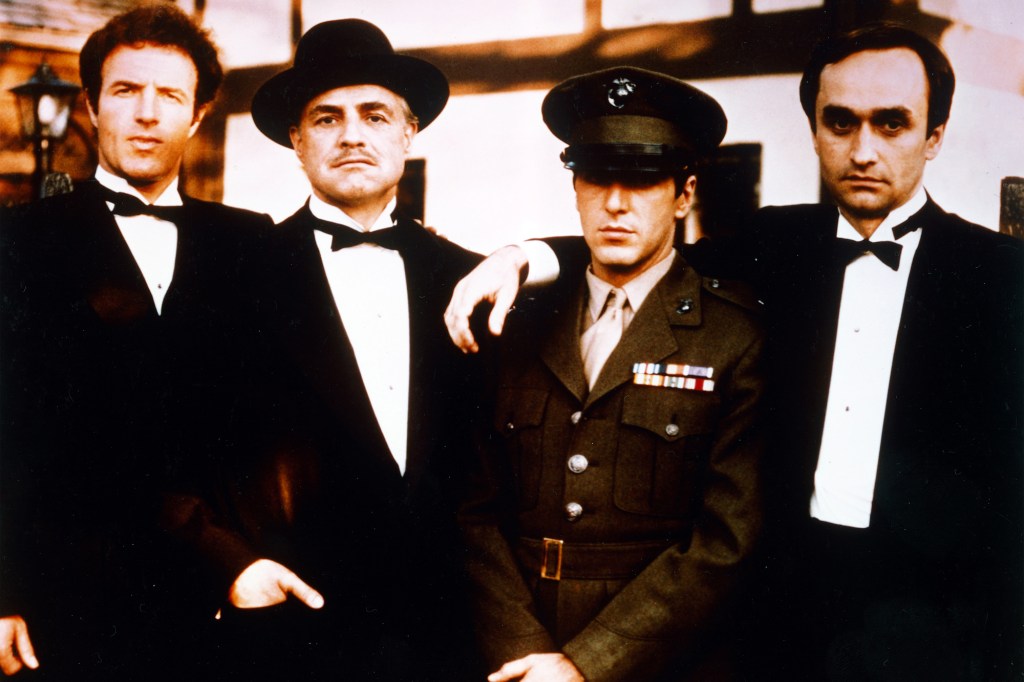 The landmark film, up there with “Citizen Kane” in terms of cinematic style and influence, altered the career trajectories of its stars — including James Caan, who played fiery, doomed Santino “Sonny” Corleone, the eldest son of Don Vito Corleone (Marlon Brando) and brother to Fredo (John Cazale), Connie (Talia Shire) and Michael (Al Pacino).

Prior to his breakout, Oscar-nominated role in “The Godfather,” The Bronx-born Caan was best-known for roles on a slew of ’60s-era television series — including “The Untouchables,” “The Alfred Hitchcock Hour,” “Get Smart,” “Wagon Train,” “Naked City” and “Route 66” — and for playing cancer-stricken Chicago Bears running back Brian Piccolo opposite Billy Dee Williams (as Gale Sayers) in “Brian’s Song,” ABC’s tearjerking Movie of the Week which aired in November 1971.

(He also appeared in several movies, including “The Rain People” in 1969, directed by Coppola — Caan’s classmate at Hofstra — and co-starring Robert Duvall, aka Corleone Family consigliere Tom Hagen.)

Caan, who turns 82 on Saturday (March 26), spoke to The Post in a wide-ranging interview about his memories of filming “The Godfather,” which airs somewhere on television virtually every day — in all of its iterations — and will be re-released Tuesday (March 22) in a comprehensive 4K ultra-high-definition Blu-ray package.

“One of the things that made ‘The Godfather’ successful, besides brilliant directing and writing and wonderful actors … was that everyone really enjoyed making it, and that comes off on the screen,” Caan said. “And I think the audience can tell that we were having a good time doing what we were doing up there. 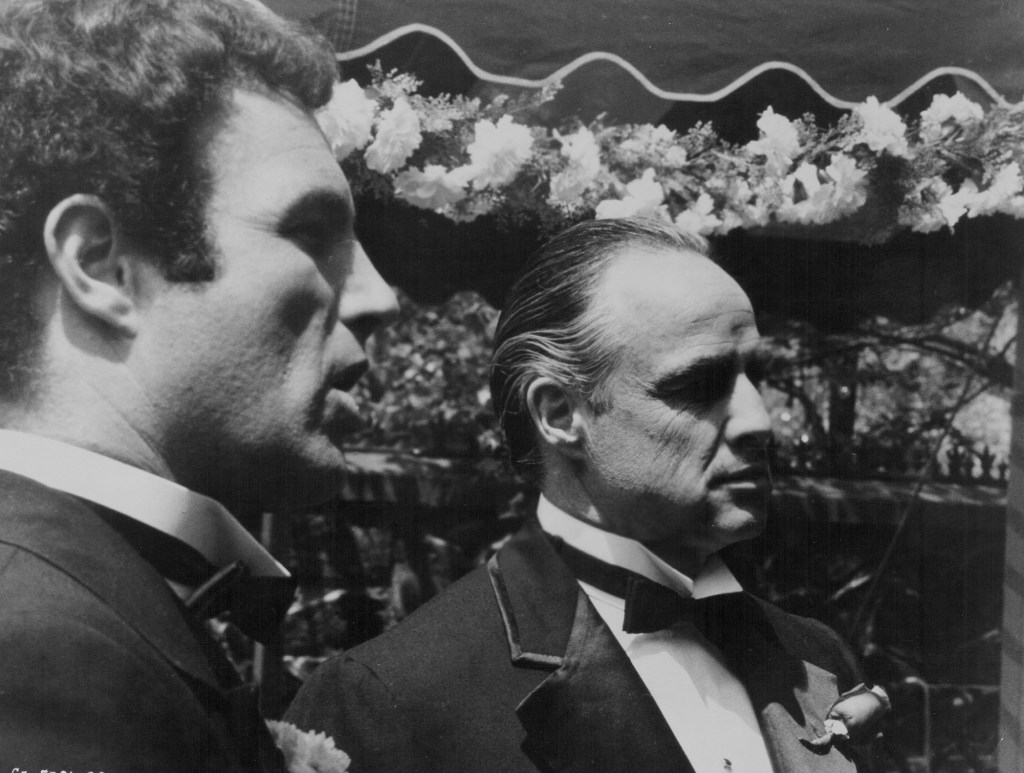 Sonny and Don Vito Corleone (James Caan, Marlon Brando) in a scene from “The Godfather.”Getty Images

“Marlon was great,” Caan said of Brando. “He had a great sense of humor, but he would have trouble figuring out the f—ing punch line sometimes. We’d go to lunch — those stupid Polish jokes were coming out at the time … and then two hours later, in the middle of a scene, I’d look at him and say something and all the sudden [imitates Brando laughing] I’d say, ‘What the f–k’s the matter with you?’ and he said [referring to the joke] ‘That’s funny.’ Two hours later it was playing in his f—ing head. He was like a child like that. I loved him.”

Caan recalled how Coppola asked him to loosen up Lenny Montana, a hulking former pro wrestler and bodyguard for the Colombo crime family making his screen debut as gruff, feared Corleone enforcer Luca Brasi — who first appears in the opening scene during the wedding of Don Vito’s daughter, Connie.

“He knocks on the door and he says, ‘Don Corleone, I am honored to be here on the day of your daughter’s wedding, may her first child …’ He did it a couple of times, the door opens, with camera on the other side of the door with Marlon. Francis comes running out and said to me, ‘Jimmy, do something!’ I said, ‘What are you talking about Francis?’ He said, ‘Do something with him. I said, ‘What do you want me to do with that f—king beast?’ ‘Do something to goose him up, do some of your s–t.’ He was stiff, and Francis was mad that he couldn’t get more out of him than [said in flat Luca Brasi voice] ‘Don Corleone.’ 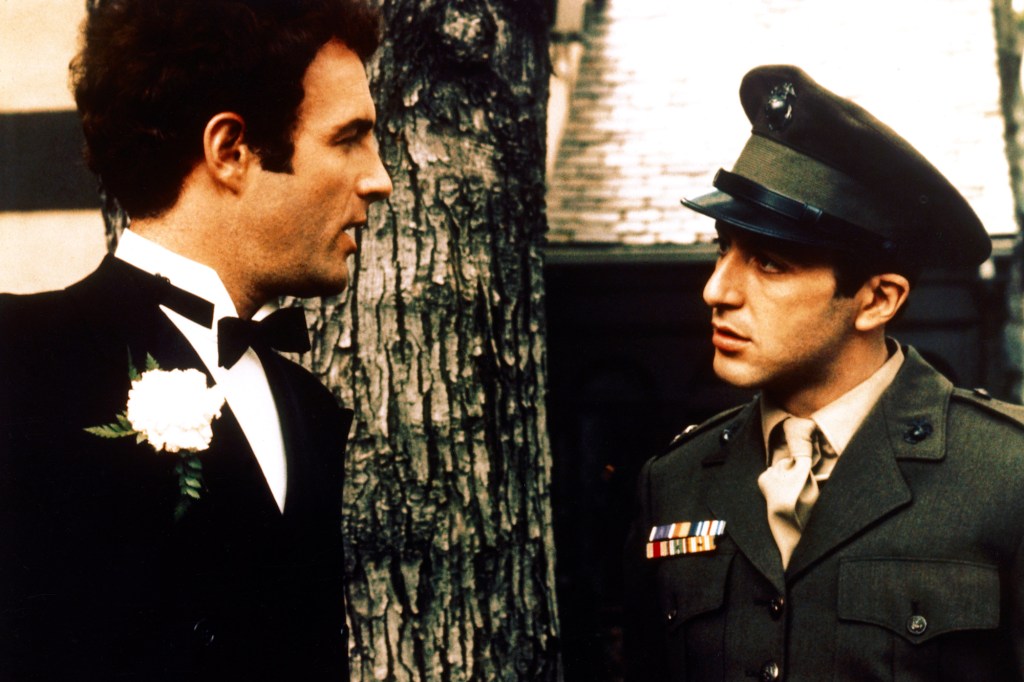 “So I grab Lenny and said, ‘Lenny, come here. You gotta do something when you open the door.’ I was trying to give him this snow job. ‘When you say, “Don Corleone,” stick your tongue out’ — his tongue looked like a shoebox for f–k’s sake — ‘and I’ll put a piece of tape on it that says “F–k you.” He was like a baby, ‘Oh, Jimmy, don’t make me do this,’ and I said, ‘Lenny, please, it’s humor, everyone’s gonna laugh and you’ll feel better. Please do this for me.’

“So I get a piece of tape and put it on his tongue … boom, they say ‘Action!’ and that’s when he says, “Don Corleone” — he sticks his tongue out and everybody falls down laughing. He was smiling. He was happy. Marlon’s line was, ‘Luca, my most cherished friend,’ and when he did that scene he had “F–k you” written on his tongue, too.”

Caan also said he used a bit of on-the-spot improvisation in the scene where Sonny beats up his pregnant sister’s husband, Carlo (Gianni Russo) on the street with his fists, his legs and the top of a garbage can.

“The stick I threw at [Carlo] when he’s running away, that wasn’t in the script,” he said. “I took one of those industrial brooms and cut the end off and put it under my seat [in the car as Sonny drives up to confront Carlo]. They said, ‘It’s not in the script’ and I said, ‘What the f–k’s the difference, just put it down there.’ I swear to God I had no idea what I was going to do with it, but I knew that’s what a lot of guys did in my neighborhood. We called them ‘attitude adjusters.’ I just grabbed it and fired [the stick] at him and Francis said, ‘That’s great, Jimmy, you looked like you were going to miss him.’ So he’s lying behind the cars on the other side and luckily, on the upswing, I caught him on the top of the coconut.” 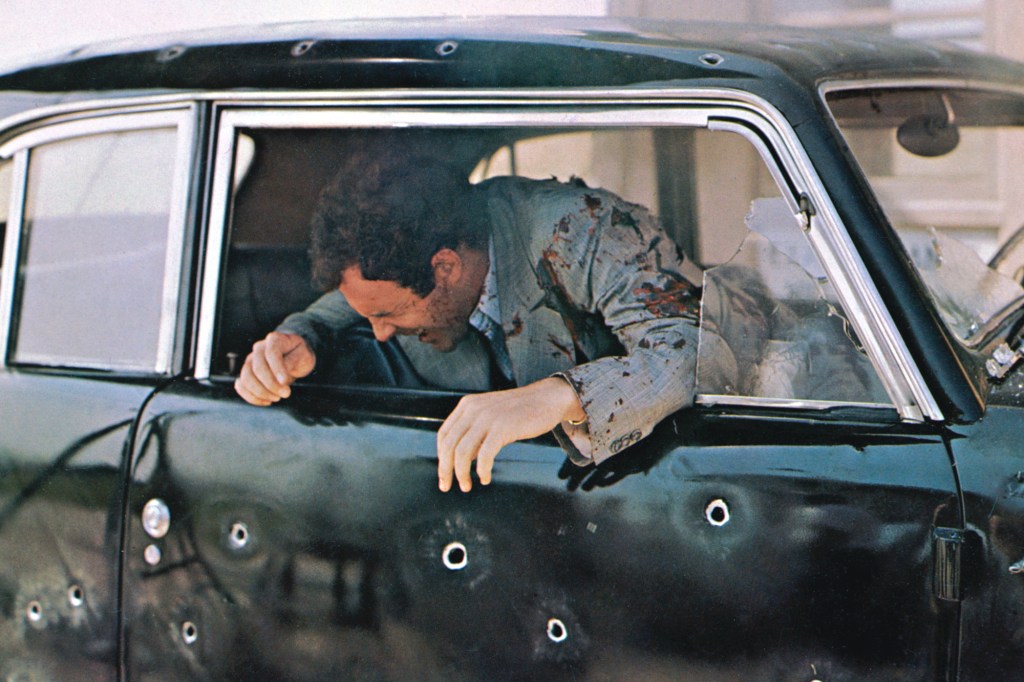 Sonny, bloody Sonny: gunned down in a hail of bullets at a tollbooth.Getty Images 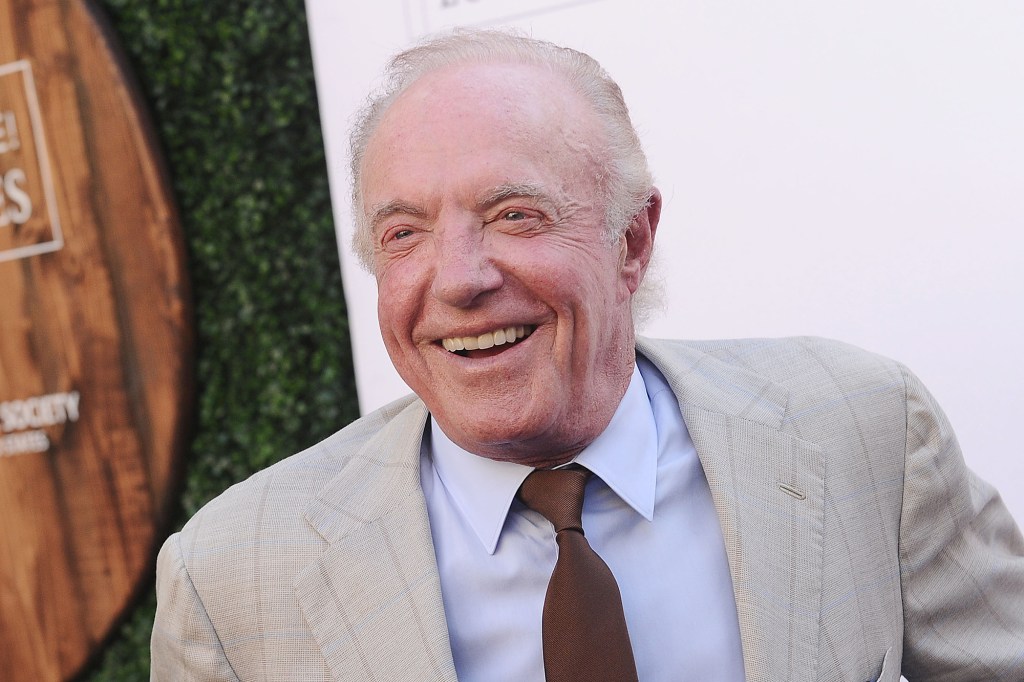 James Caan in 2017. He was born and raised in The Bronx.FilmMagic

Caan said he also went back to his Bronx roots for the scene in which Sonny confronts the FBI outside the gates of the Corleone compound on the day of Connie’s wedding _ and for Sonny’s iconic black-and-white shoes.

“The [FBI] guy took a picture of me with one of those old square box cameras,” he said. “This was not written in the script [but] I got so f—king hot that I grabbed his camera and smashed it on the ground. I took like $40 out of my pocket and kept walking — because, in my neighborhood you paid for it. It didn’t matter what you did, but you paid for it.

“We didn’t really have a big budget and we added to it constantly,” he said with a chuckle. “They said, ‘The shoes are not in the script’ and I said, ‘A lot of Italian guys in my old neighborhood, they have maybe two suits to their name but they’ve got 10 pairs of shoes.’ So I went to The Bronx one day and bought those black-and-white shoes for $10 and wore them in the movie.”

Previous post Move over drivers, robots can deliver in snow, rain, and heat