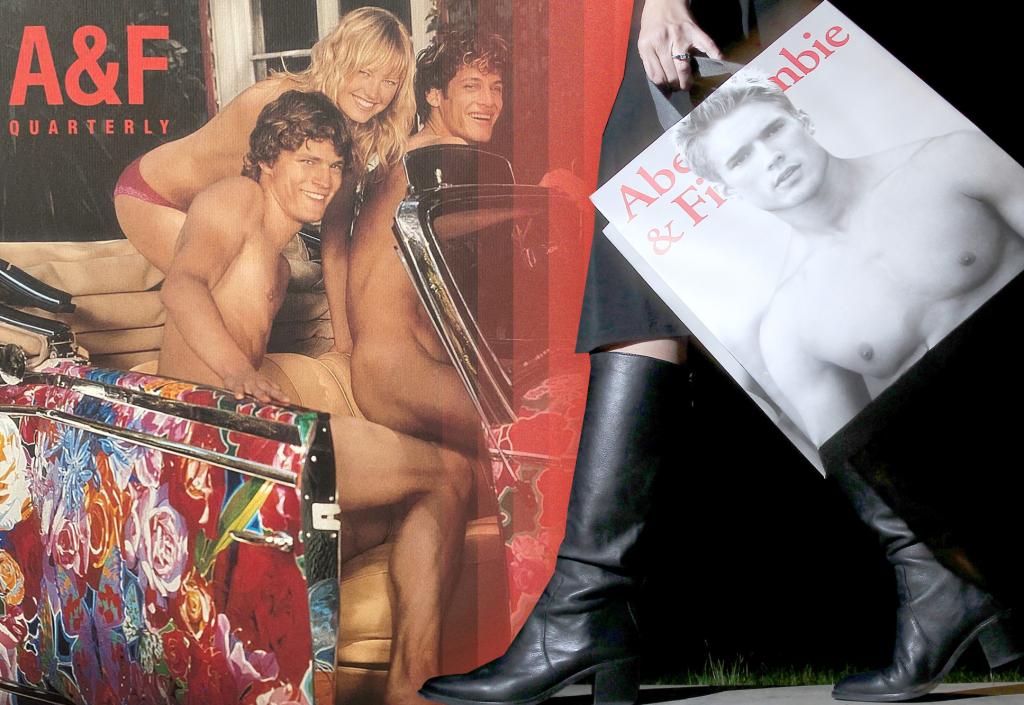 Not too long ago, suburban shopping malls, not social media, helped drive style trends, shopping habits and what was viewed as desirable to teens.

And in the 1990s, there was no hotter mall retailer than Abercrombie & Fitch — a store that sold a side of sex with its preppy staples.

Photos of their scantily clad models were splashed all over high school lockers and dorm rooms and their logo T-shirts were essential wardrobe items. They even invaded the airwaves with LFO’s 1999 hit “Summer Girls,” which featured the line: “I like girls that wear Abercrombie & Fitch.”

“It was this huge explosion. If you weren’t wearing Abercrombie, you weren’t cool,” says former brand model Ryan Daharsh in the new Netflix documentary “White Hot: The Rise and Fall of Abercrombie & Fitch,” out April 19.

The documentary traces the explosive growth of the fashion and pop culture sensation and how its clothing and seductive marketing dominated youth culture for over a decade. 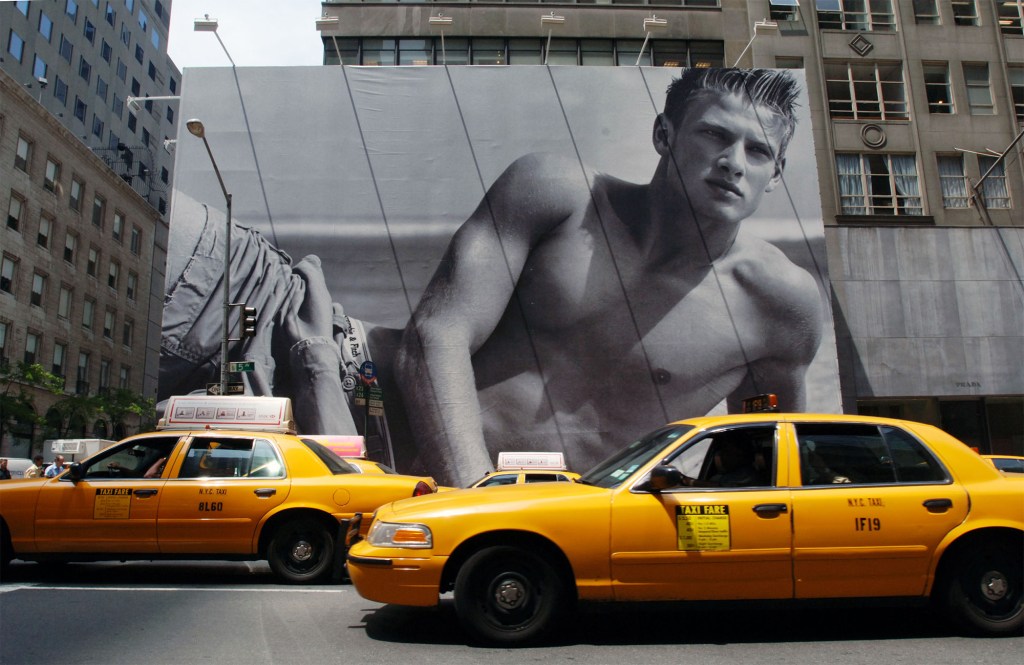 A cab drives by a typically sexy billboard marking the future home of the Abercrombie & Fitch store on Fifth Avenue. Bloomberg via Getty Images

Under the stewardship of ultraprivate CEO Mike Jeffries, the brand was aspirational — and, as lawsuits later alleged, discriminatory in its hiring practices. Bogged down by bad press, legal issues and its reluctance to move with the ever-changing times, it had fallen out of fashion by the late aughts.

The original Abercrombie & Fitch was founded in 1892 in Manhattan by David T. Abercrombie and catered to upper-crust sportsmen like Teddy Roosevelt and Ernest Hemingway. In the 1970s, it filed for Chapter 11, changed hands and in 1988 it was bought by Les Wexner’s the Limited Brands. In 1992, they hired Jeffries to revamp the company.

Instead, he turned it into a juggernaut. 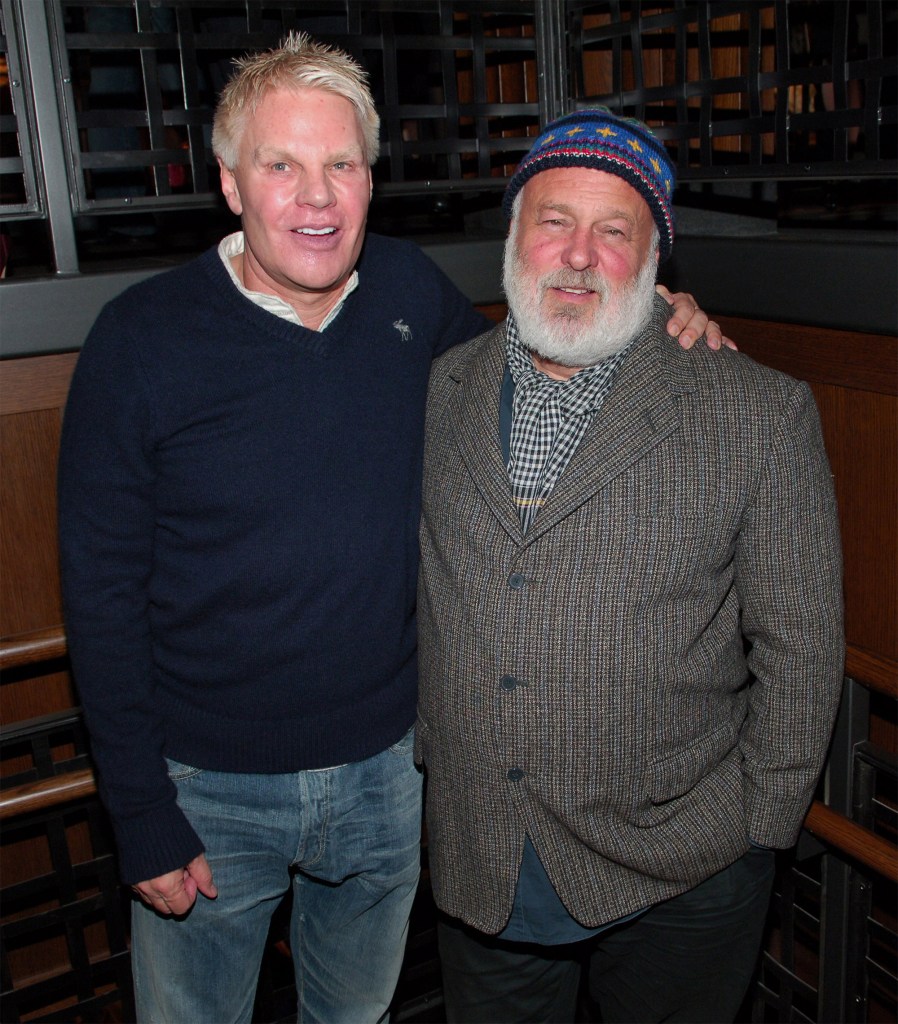 Their marketing was as popular as the clothing, with suggestive, sometimes nude campaigns shot by photographer Bruce Weber. Campaigns and catalogs featured models like Malin Akerman, Jamie Dornan, Channing Tatum and Jennifer Lawrence before they became famous in various states of undress.

“One of the earliest brands to really merge youth culture and sex appeal was really Calvin Klein,” Robin Givhan, Washington Post senior critic at large, says in the documentary. “What Abercrombie did was they made this middle ground between the sex that Calvin Klein was selling and the all-American preppiness that Ralph Lauren was selling. Just aspirational enough but not so expensive that it was out of reach.”

In 1996, Jeffries took it public, and the company was rolling in dough.

“In the first week that I worked at Abercrombie & Fitch, the HR rep talked about how you could write Abercrombie & Fitch with dog s–t and put it on a baseball hat and sell it for $40. She was like, ‘That’s where we are right now. It’s awesome,’ ” says Dr. Kjerstin Gruys, a former merchandiser, in the film.

When it came to staffing their stores, the brand went after classically good-looking collegiate types. 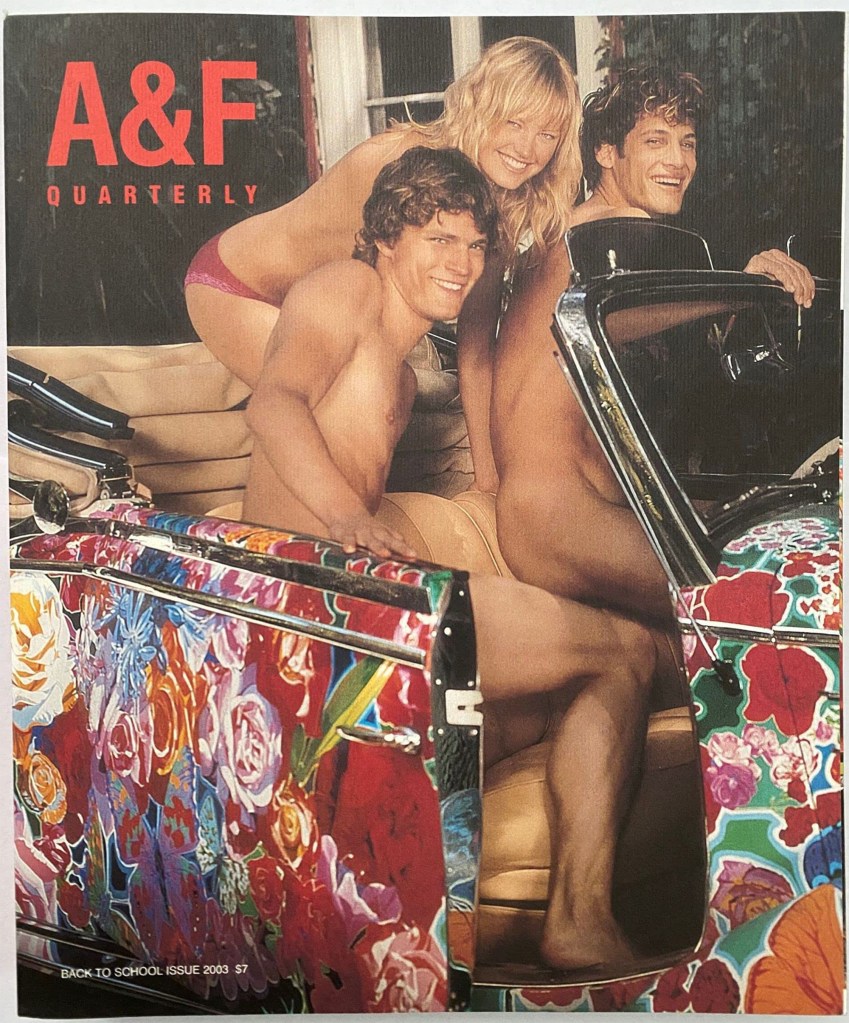 Before they were stars, Malin Akerman and Jamie Dornan (front) stripped down for this 2003 A&F image.Abercrombie & Fitch

“No other mall brand went to the extreme that Abercrombie did in micromanaging the look of everything from the store down to the person who was cleaning up the stockroom. Jeffries was an extreme,” Givhan says.

For example, the company’s “aesthetic manual” maintained that classic, natural hairstyles were acceptable. Dreadlocks on either men or women were not. Gold chains for guys weren’t allowed and females were only able to wear subtle jewelry. 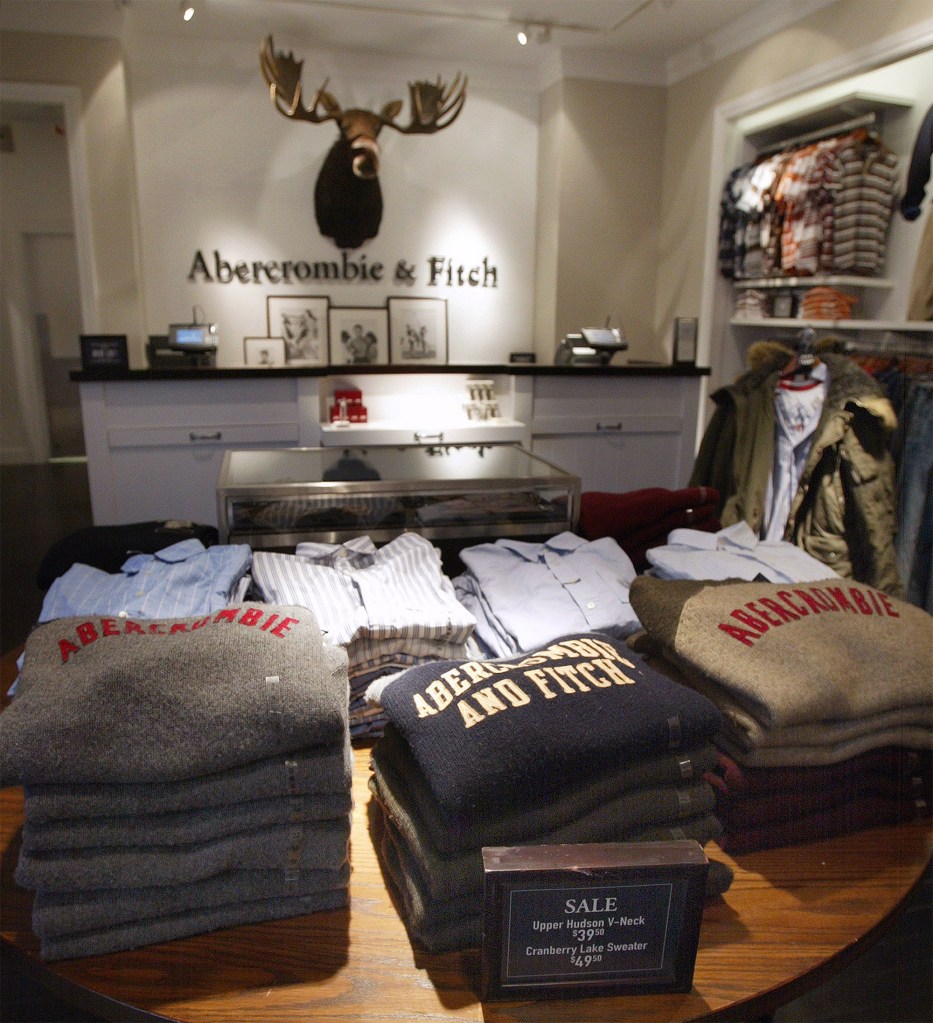 Abercrombie’s preppy staples and lodge decor made the stores the hottest mall destinations in the 1990s and early aughts. Getty Images

In 2002, the brand — which was also known for its irreverent graphic T-shirts — waded into its first major controversy. They sold one featuring stereotypical caricatures of Asian men with the slogan, “Wong Brothers Laundry Service.” The tagline read: “Two Wongs can make it white.”

It caused a firestorm and led to massive protests, especially from Asian Americans.

The brand apologized and burned the shirts.

However, a year later, the brand found itself in legal hot water.

The film features interviews with Asian, Black and Latino former employees, who recalled how, little by little, their hours were cut back. Jennifer Sheahan, an Asian American woman who worked in a California location, said she approached her assistant manager who was also Asian American.

“[He] said, ‘The real reason is because after the corporate blitz, one of the people from corporate went around and noticed a bunch of Asian people in the store. They said, ‘You need to have more staff that looks like this.’ They pointed to an Abercrombie poster. It was a Caucasian model,” Sheahan says, adding that she was deeply hurt by the incident.

Sheahan was one of the plaintiffs who filed a class-action lawsuit alleging discriminatory hiring practices against minorities and women.

The following year, the company settled and agreed to change their recruiting and hiring practices.

But the company hadn’t learned its lesson. In 2009, a Muslim teen alleged the company wouldn’t hire her because she wore a hijab. The case went all the way to the Supreme Court and she won.

Like Victoria’s Secret, another former member of the L Brands, Abercrombie was seen as increasingly out of step with younger millennial and Gen Z customers. 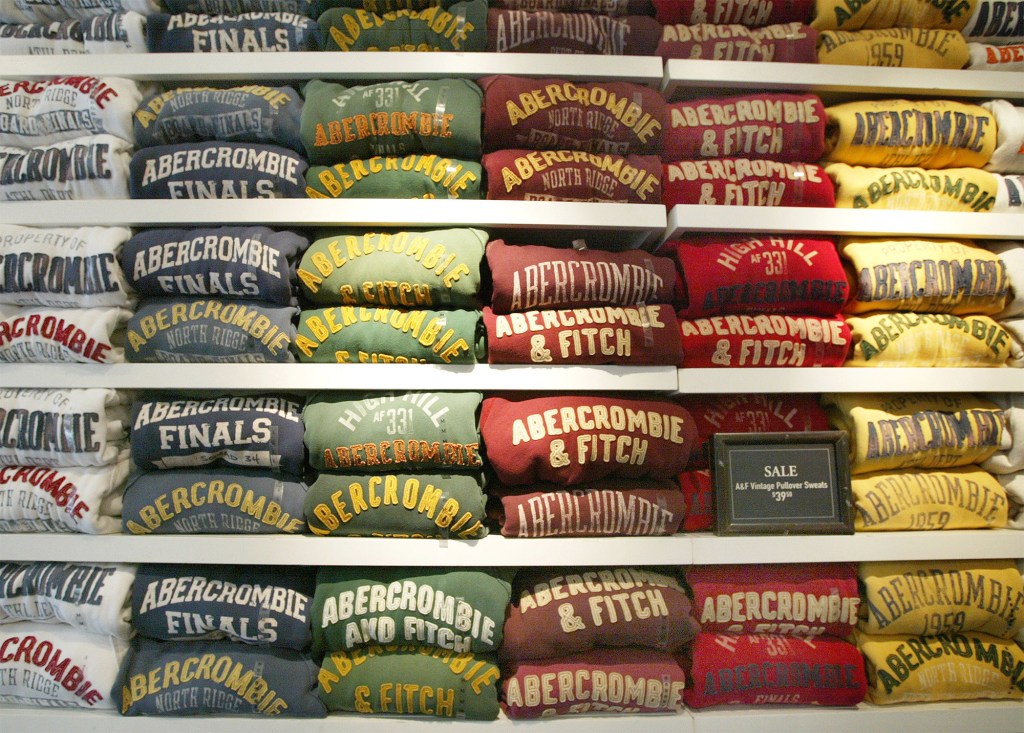 In 2013, an activist started a petition asking Abercrombie to make plus-sized clothing after the resurfacing of a 2006 profile in which Jeffries explicitly admitted to being exclusionary and going “after the cool kids.” In response, the company promised to make changes to its line.

In 2014, Jeffries stepped down. He did not participate in the documentary.

The retailer was further tarnished by its association with Weber, who had shot its campaigns and was swept up in the #MeToo reckoning.

“It was very well known with Bruce that he liked young men,” said Daharsh of the photographer who was responsible for shaping the brand’s aesthetic.

Since 2017, Weber has been accused in two lawsuits of groping male models, including one who says he was victimized during a 2009 Abercrombie shoot. (Weber settled both lawsuits for undisclosed sums).

Bobby Blanski, who modeled for the brand, recalled in the film that Weber invited him over for dinner. He declined, and less than two minutes later, the phone rang with bad news. He had been cut and sent home.

“In that instant, I was done,” Blanski says in the doc.

In a statement issued last week, the company, which now extols inclusivity as a core value, said: “While the problematic elements of that era have already been subject to wide and valid criticism over the years, we want to be clear that they are actions, behaviors and decisions that would not be permitted or tolerated at the company now.”