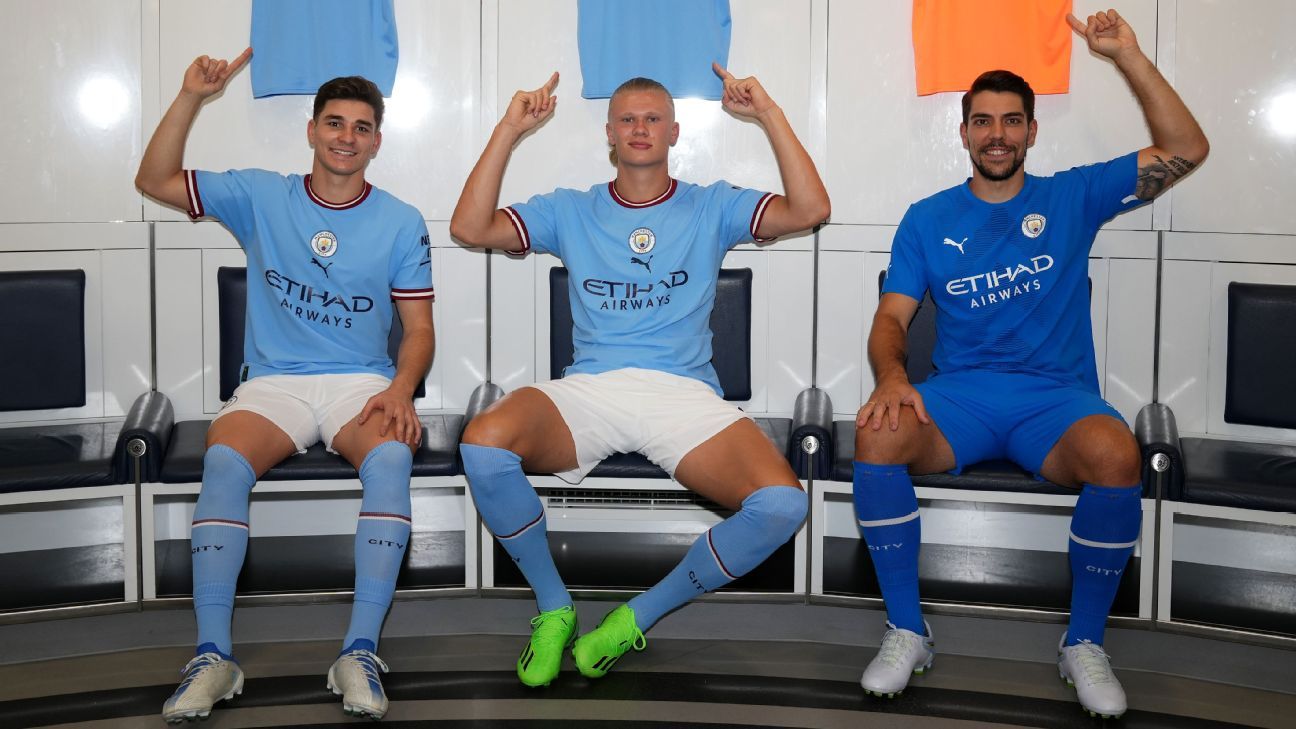 There isn’t a trophy for “winning the transfer window,” which is perhaps just as well for those clubs trying to catch Manchester City as the Premier League champions have already set a new standard for getting business done this summer.

While many of their rivals continue to struggle to negotiate ins and outs — Manchester United made only their second signing of the window on Friday and have raised just £10 million through player departures — City have been able to sign the hottest property in world football (Erling Haaland) and an established England international midfielder (Kalvin Phillips) and still end up with £26m in profit from their transfer dealings to date.

Raheem Sterling’s £47.5m move to Chelsea this week, following on from the £45m deal that saw Gabriel Jesus leave the Etihad for Arsenal earlier this month, is the latest example of City being able to trade players out for a significant fee having already recruited a replacement without breaking the bank to do so.

– Transfer Grades: City get a B-, Chelsea an A for Sterling
– Stream ESPN FC Daily on ESPN+ (U.S. only)
– Don’t have ESPN? Get instant access

Liverpool and Tottenham Hotspur have invested well so far during this window, but they have both spent far more than they have recouped. The same applies to Chelsea and Arsenal. United, meanwhile, continue to struggle to show any sign that they have a coherent plan for rebuilding the Old Trafford squad.

City, however, have now become so slick with their transfer dealings, led by director of football Txiki Begiristain, that they appear to have hit the sweet spot not only when it comes to signing players at the right time for reasonable fees but also for offloading contracts at the perfect moment.

When City’s rise to prominence began in 2008 after Sheikh Mansour bin Zayed Al Nahyan’s takeover of the club, balancing the books in terms of transfers was a distant dream for those charged with building a team capable of winning at the highest level. In those early days, City embarked on what then-chief executive Garry Cook described as an “accelerated acquisition strategy” that was designed to turbocharge their elevation to Champions League participation.

In their first full season under Abu Dhabi ownership, in 2009-10, City spent £132m and raised £28m. The next year, the gap was even bigger, with £165m laid out and £36m brought in. That pattern has continued throughout the past decade, with 2017-18 breaking club records as £285.7m was spent compared with £82.2m raised. This summer, however, is a different story, and it is one that will worry all of City’s rivals, domestically and in Europe. In January this year, City reported record revenues of £569.8m for the 2020-21 season, taking their annual earnings ahead of neighbours United for the first time.

United are expected to reclaim the top spot in English club earnings this time, due to football returning to normality after adjusting to the COVID-19 pandemic, but City’s off-field growth has now made them a force to be reckoned with commercially and they no longer rely on the wealth of Sheikh Mansour to bankroll their ambitions. City do rely heavily on the wealthy backings of sponsors and partners from the United Arab Emirates, but despite the bulk of their commercial revenue coming from the same region as Sheikh Mansour, none of those deals has been identified as breaking the Premier League and UEFA’s related party regulations.

Erling Haaland (centre) is Manchester City’s marquee signing of the summer, but the striker is just one of a number of transfers that the club has overseen in what has been a profitable summer. Matt McNulty – Manchester City/Manchester City FC via Getty Images

Yet as United have shown, huge revenues offer no guarantee of success. It requires the presence of smart operators in key positions to ensure that a club succeeds in all areas, and City are now reaping the benefits of having some of the world’s best in those areas.

In Pep Guardiola, City employ arguably the best coach in the game, while Begiristain and chief executive Ferran Soriano, both hired by chairman Khaldoon Al Mubarak in 2012, also carved out big reputations while working together at Barcelona. In turn, Begiristain and Soriano have built a recruitment model that enables the club to identify the best talent and move for those players quickly and efficiently. And this summer is an example of how City’s recruitment model is working as well as Guardiola’s team.

Haaland was signed from Borussia Dortmund for just £51m due to City triggering the forward’s release clause. They beat off competition from Real Madrid to sign the 21-year-old, who could become the club’s centre-forward for the next 10 years. If so, that would break down at £5.1m-a-year for potentially one of the biggest stars of the next decade. The deal for Phillips, 26, is another example of astute investment in a player with his best years still ahead of him. By investing £14m in River Plate forward Julian Alvarez, 22, City have also taken a low-risk gamble on a player who is regarded as one of the best young prospects in South America. They have even found time to sign a new reserve goalkeeper, picking up Stefan Ortega as a free agent.

City are still interested in Brighton & Hove Albion left-back Marc Cucurella, 23, but if they move for the Spanish player, it is likely that they will have raised more funds by then. Oleksandr Zinchenko is expected to move on, with both Chelsea and Arsenal interested in the Ukraine international. Nathan Ake, the Netherlands defender, is another who has been linked with a move, although the latest reports suggest he could remain at the Etihad for the coming season.

So far this summer, City are £26m in profit in the transfer market. And while the Sterling and Jesus deals have generated the bulk of the incoming funds, City have somehow been able to raise £43.5m by offloading five players who have never appeared in the Premier League for Guardiola’s team. Gavin Bazunu (£15m, Southampton), Romeo Lavia (£12m, Southampton), Pedro Porro (£7.2m, Sporting CP), Darko Gyabi (£5m, Leeds United) and Kou Itakura (£4.3m, Dortmund) have all left City for significant fees this summer, and it all adds up.

If Zinchenko and Ake also head through the Etihad exit door, City could be over £70m in profit from their summer trading and will have done that despite adding Haaland and Phillips to the squad.

If City keep winning on the pitch and growing their revenues off it, making a profit in the transfer market this summer only makes them more capable of beating their rivals to the best players, and biggest trophies, in the years ahead.