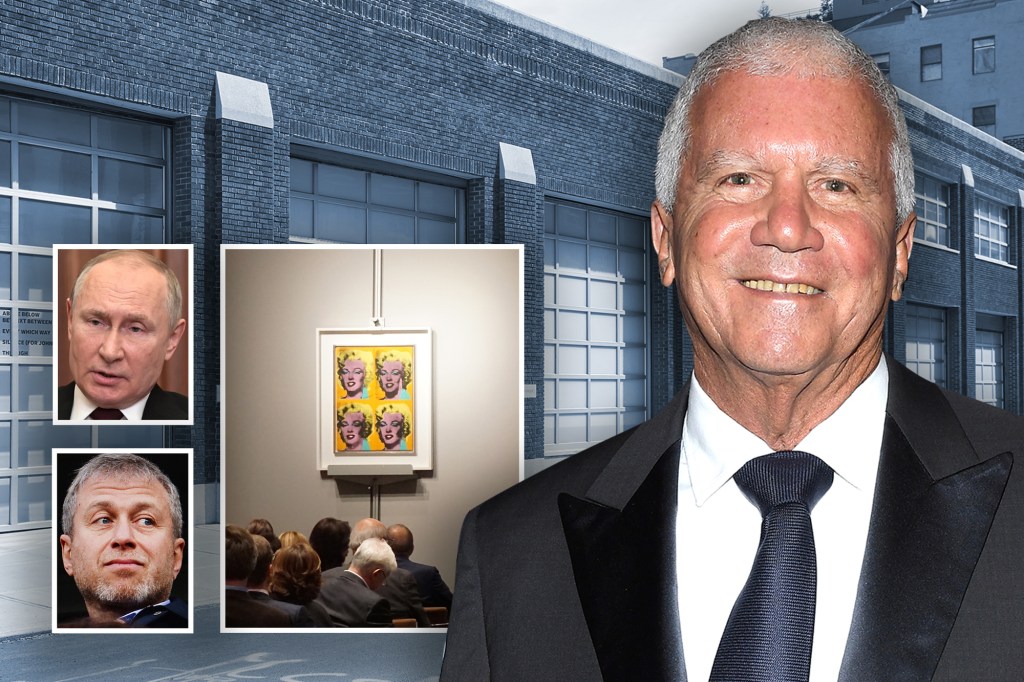 New York’s most successful art tycoon has built a billion-dollar empire by being the dealer of choice for Russia’s biggest oligarchs.

One art world source dubbed Gagosian “the official art dealer to the Russian oligarchy,” adding that “the Bond villains he consorts with are dangerous, repulsive and devalue art by their very presence.”

Larry Gagosian, 76, has worked with billionaire and Putin confidant Roman Abramovich, whose assets were frozen by the British government Thursday over Russia’s ongoing invasion of Ukraine, and Mikhail Fridman, the sanctioned co-founder of Alfa Bank.

He is also said to have cultivated relationships with Russia’s most important museum, run by a close associate of President Vladimir Putin.

With Ukrainian artists and others calling for more sanctions in the cultural sector, such relationships may soon be under scrutiny, analysts say.

The Gagosian Gallery in New York did not return The Post’s calls and an email seeking comment this week. 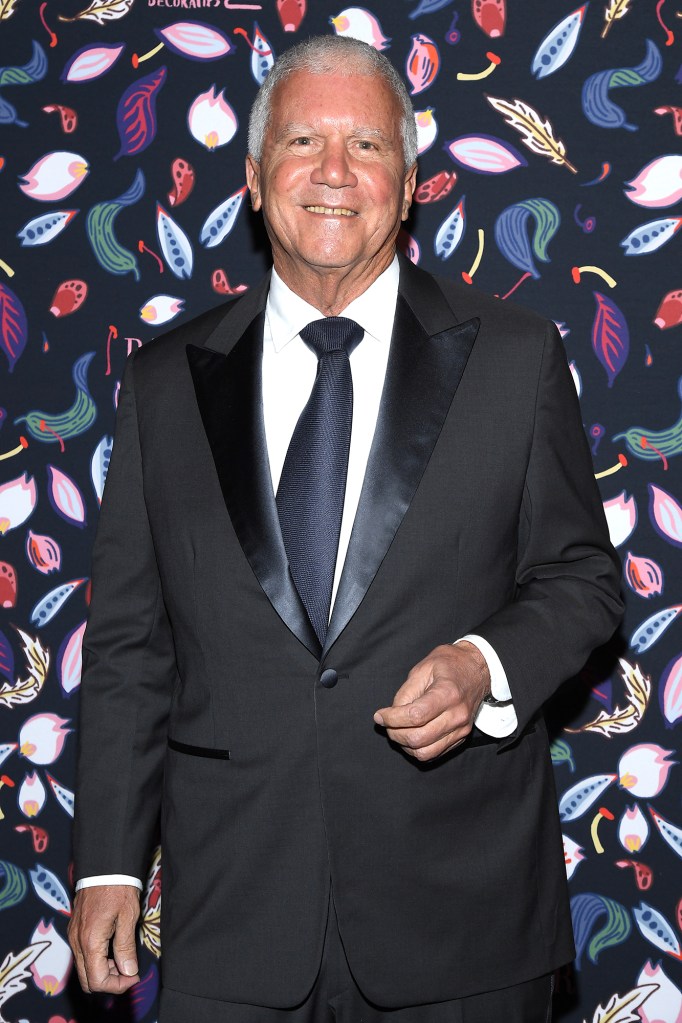 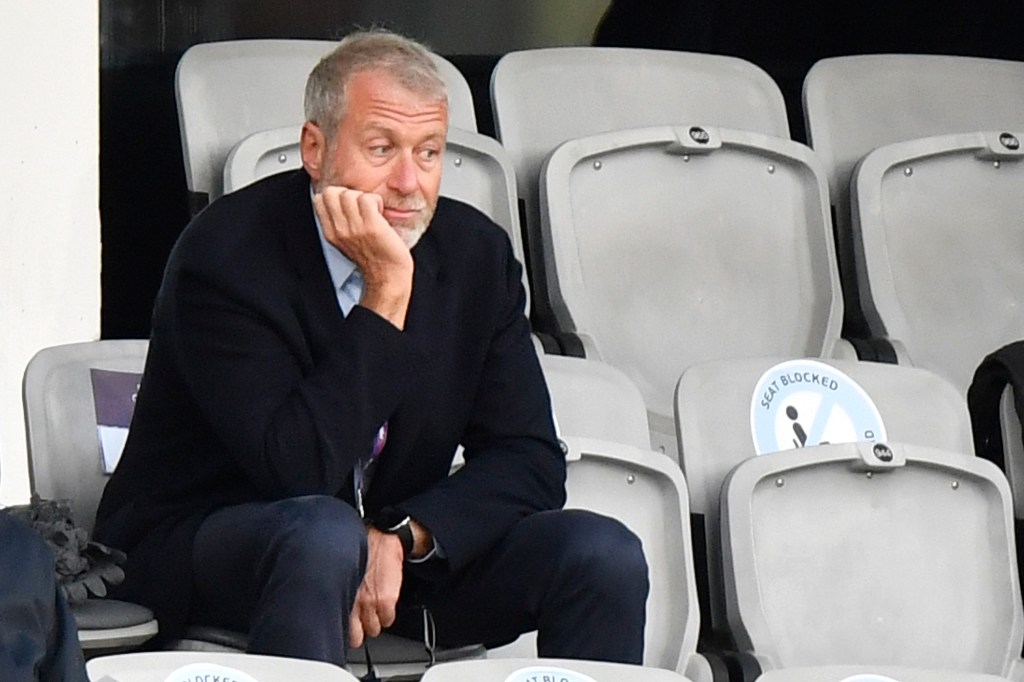 Gagosian, who owns several galleries around the world, has long held close ties to Abramovich, the owner of the UK’s Chelsea football club, helping him and ex-wife Dasha Zhukova build up a massive art collection. It includes pieces by artists Francis Bacon and Damien Hirst, whose work has been represented by Gagosian’s galleries.

“In my years working for the Gagosian gallery, I watched Larry’s interest move from key American collectors to mother Russia,” said a former gallery employee who did not want to be identified. 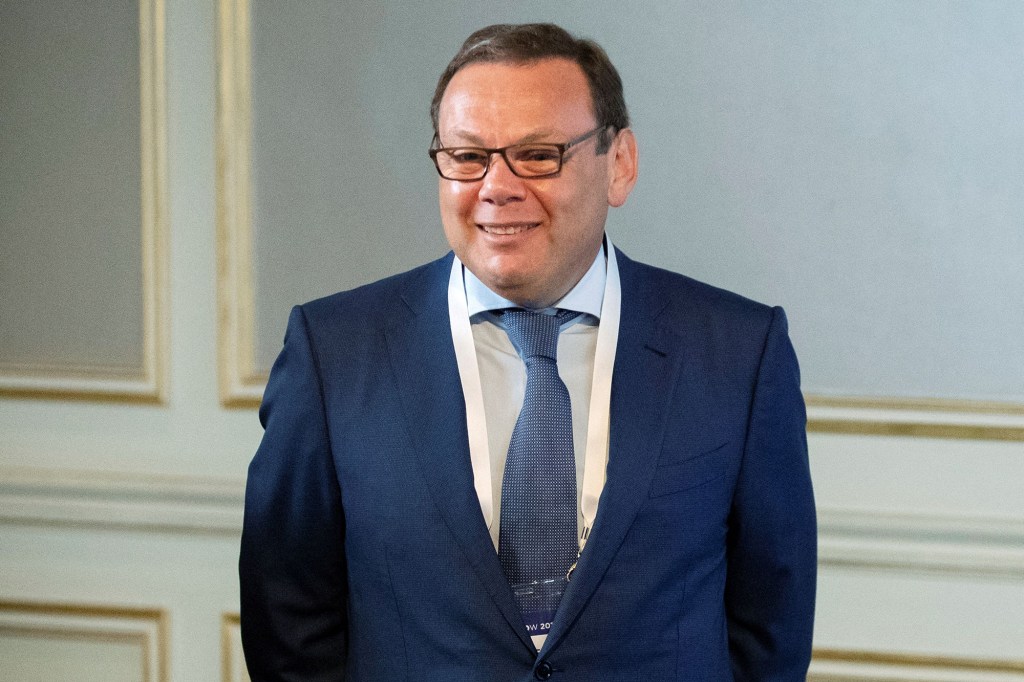 In his pursuit of wealthy Russian clients, Gagosian hosted exhibitions in Moscow, beginning in 2007, featuring artists Hirst, Willem de Kooning and Jeff Koons, among others. That inaugural show was partly financed by Russia’s Alfa Bank, Russia’s largest private financial institution, which was sanctioned by the US Department of the Treasury last month.

One of the bank’s founders, Fridman — who, as of 2017, was Russia’s seventh-richest citizen — was a client of the Gagosian Gallery, and sanctioned by the European Union in February. He resigned from the bank’s board earlier this month, according to reports.

Fridman bought an Andy Warhol painting of Marilyn Monroe through the gallery for more than $38 million in 2013. he then flipped the 1962 acrylic and silk-screen “Four Marilyns” two years later for $44 million. 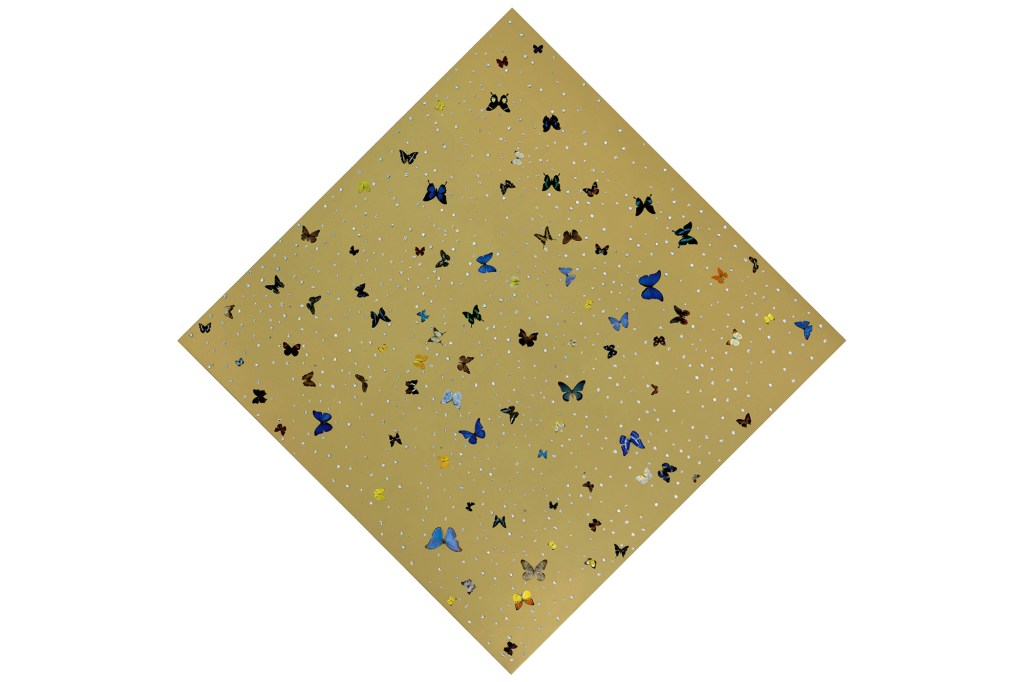 At the beginning of his business relationship with Gagosian, Fridman had bought “Midas,” a monochrome painting of butterflies in a gilded cage, by Hirst from the Gagosian Gallery.

“Gagosian is no different from all the other art dealers who were circling around the money trough of the oligarchs,” said an art world source who did not want to be identified. “Everybody, including Christie’s and Sotheby’s were shamelessly courting the oligarchs.”

But Gagosian, whose net worth is estimated at $600 million, may have been better than most at courting these billionaire clients. His gallery is the most successful modern dealership in the world, with outposts in Geneva, Los Angeles and even a hangar at a Paris airport. The nearly 18,000-square-foot space near a runway at Le Bourget has featured exhibitions of Gagosian artists Richard Serra and Anselm Kiefer, among others. 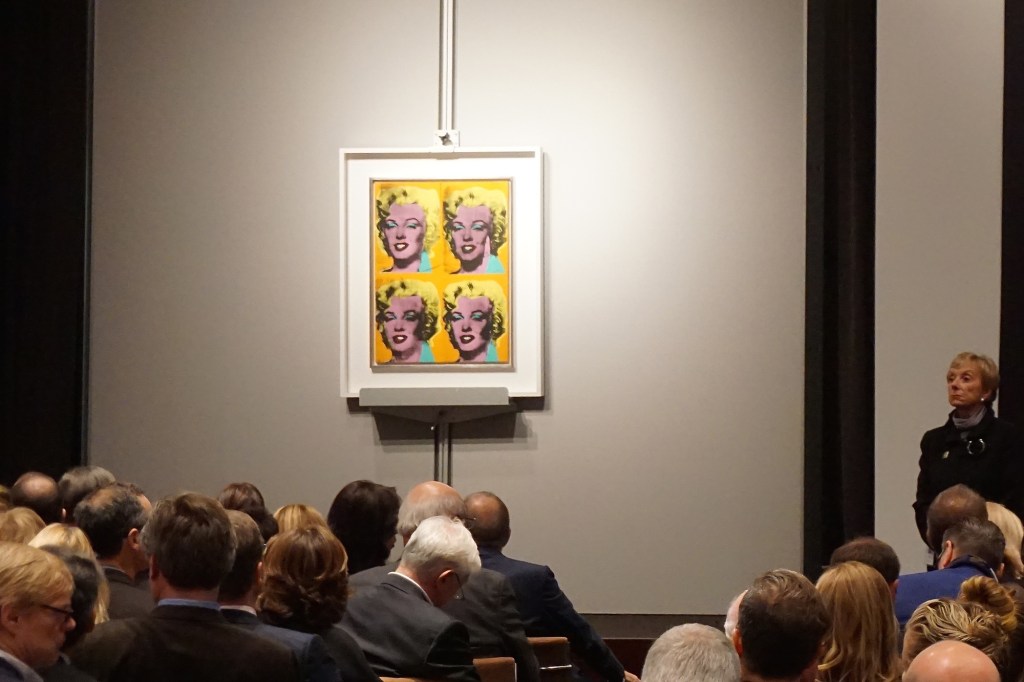 Andy Warhol’s “Four Marilyns” is one of the paintings Fridman bought through Gagosian’s gallery.Anadolu Agency/Getty Images

“Larry occupies a unique position that hasn’t been reached by any dealer in the history of art and will never be reached after him, said fellow contemporary art dealer Philippe Segalot in a 2018 interview with allinet, an online art journal. “He is the greatest on the market. He is a true military machine.”

To that end, Gagosian has maintained a close connection with the State Hermitage Museum in St. Petersburg, Russia, and its longtime director Mikhail Piotrovsky, who is so close to Putin that he boasted about helping the Russian president draft constitutional amendments in 2020. Piotrovsky’s wife Irina worked with Putin for six years while he was deputy mayor of St. Petersburg in the early 1990s. 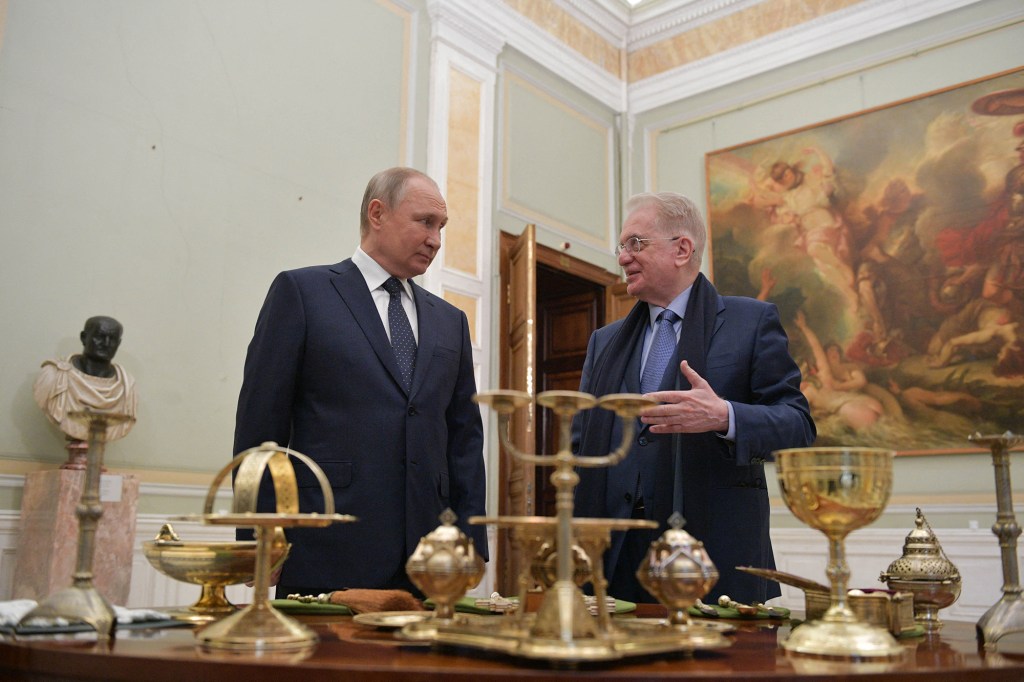 Russian President Vladimir Putin with Mikhail Piotrovsky, who has been wined and dined by Gagosian.ALEXEI DRUZHININ

“It’s not that I’m Putin’s person since the early ’90s,” said Piotrovsy in an interview with the Art Newspaper last year. “Putin has been my person from the early ’90s. He is from Petersburg. He had approximately the same job that I did. We both worked for the reputation of Petersburg. So indeed he is closer to me than many others.”

In partnership with Piotrovsky, Gagosian has staged several art exhibitions of his clients’ work at the Hermitage in the past, and wined and dined Piotrovsky on his numerous trips to the US. 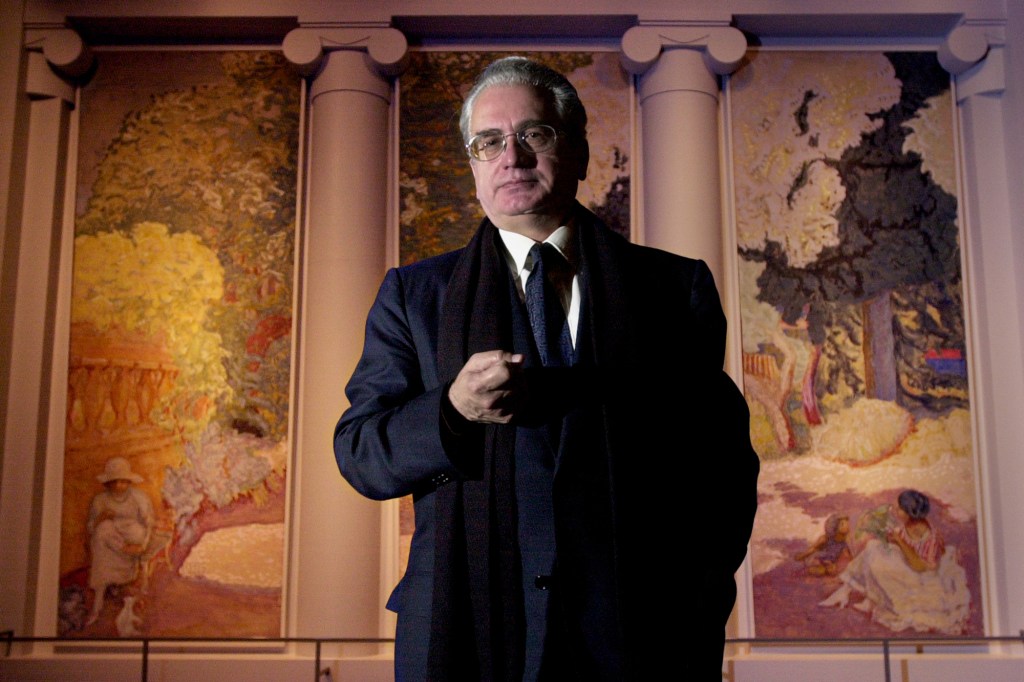 Piotrovsky, the long-time director of the State Hermitage Museum in St. Petersburg, Russia, is so close to Putin that he boasted about helping the Russian president draft constitutional amendments in 2020.Ken Faught

“My relations with Dr. Piotrovsky are excellent,” said Gagosian, the son of Armenian emigrés in a 2018 interview. “After all, he is half-Armenian. For me, to be an Armenian means to have a kinship with Russia.”

Gagosian and the New York-based Hermitage Museum Foundation, a non-profit that raises money for restoration projects and artistic donations to the Russian museum, hosted Piotrovsky on visits to the US, including “whirlwind” tours of Palm Beach and Washington DC in 2009, according to the group’s federal tax filings.

During the Palm Beach trip, Piotrovsky was treated to a farewell brunch at Mar-a-Lago, hosted by Donald Trump. In Washington, he was given a private tour of the Library of Congress and awarded the Woodrow Wilson Award for Public Service. He even laid a wreath at Mount Vernon where George Washington is buried, according to tax filings. 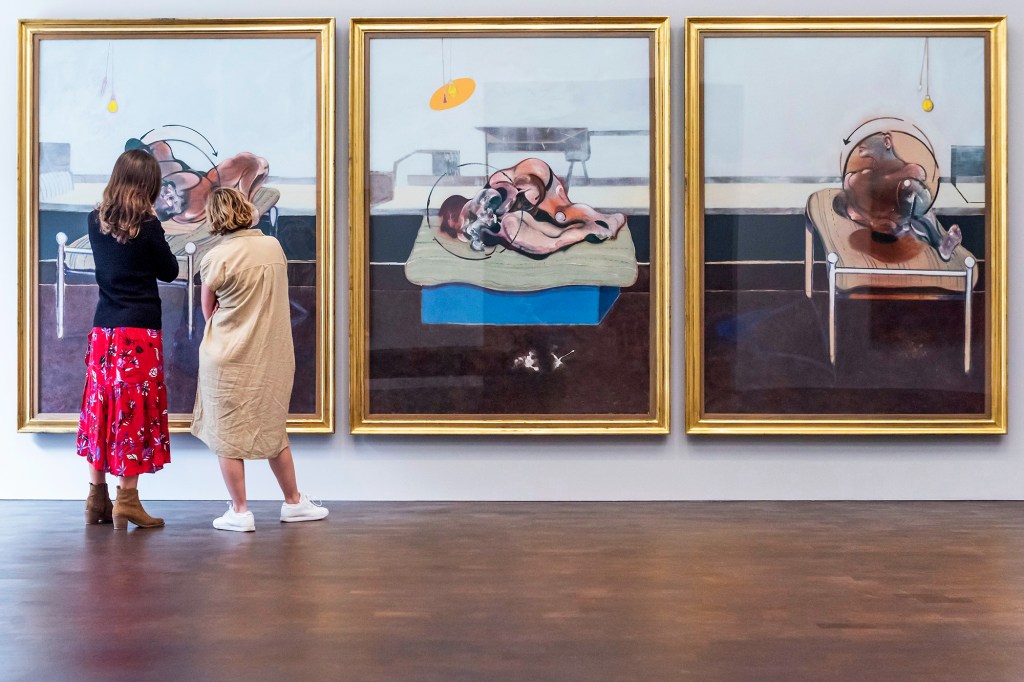 In 2017, “Larry Gagosian graciously hosted an intimate dinner for Professor Piotrovsky and several art collectors in his home,” according to the Hermitage Museum Foundation’s website.

Abramovich, who made international headlines when he paid $86.3 million for Francis Bacon’s “Triptych” and another $33.6 million for Lucian Freud’s “Benefits Supervisor Sleeping” in 2008, was added to the British sanctions list of “pro-Kremlin” oligarchs with ties to the UK.