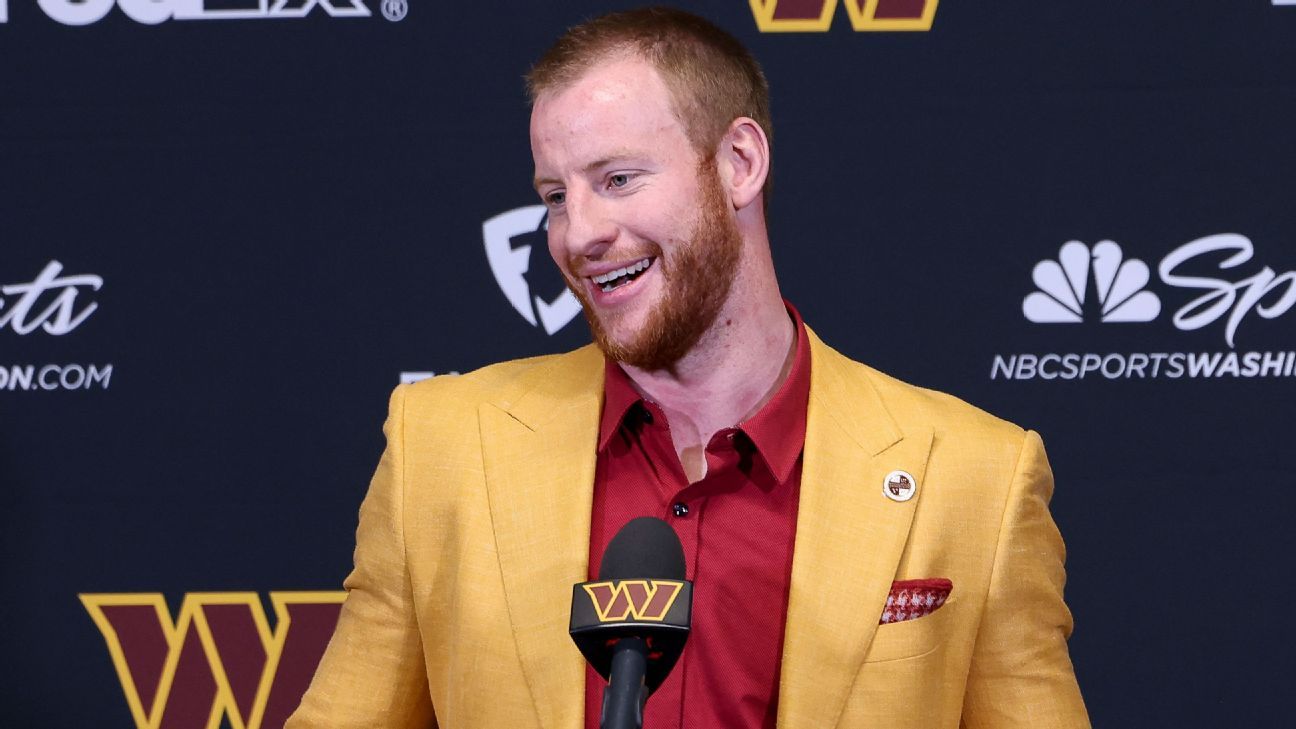 ASHBURN, Va. — The Washington Commanders’ quarterback search has lasted more than 30 years, interrupted by brief periods of solid play and the hope that maybe, just maybe, Quarterback X would end the quest. It never happened.

The Commanders embarked on yet another search this offseason, which led them to Carson Wentz and another period of hope. The search included a meeting with former Washington coach Joe Gibbs, a deep dive on analytics, a film session at the NFL scouting combine and calls with Wentz’s former coaches.

Washington’s search was not like those in other years, because coach Ron Rivera liked his roster enough to give up salary-cap space and draft picks to find the right guy.

It was a more aggressive mindset than last offseason, when Washington made an offer to Detroit for Matthew Stafford but could not afford to be as aggressive as the Los Angeles Rams. The Commanders considered trading up in the draft last year to select Justin Fields but felt the price was too prohibitive.

But this offseason, Rivera made it clear to the NFL world that the Commanders were open for business. They mapped out a strategy and made a trade with the Colts — the teams swapped second-round draft picks in 2022 and Washington also gave up a third this year and a conditional third in 2023 — to get the No. 2 overall pick from the 2016 NFL draft.

Wentz will be Washington’s 33rd starting quarterback since the franchise last won the Super Bowl after the 1991 season. Here’s how the Commanders landed him:

Washington’s scouts studied the current group of college quarterbacks during the season. The Commanders knew, even when they went on a four-game winning streak, that quarterback would be an offseason priority. But with the No. 11 pick in the first round, and with questions about the quality of this class, the team focused on finding a veteran.

In January, Rivera flew to Charlotte, North Carolina, to visit with Gibbs, who led Washington to three Super Bowl victories in the 1980s and early ’90s. He won with a different quarterback each time. Rivera spent half a day with Gibbs, with up to two hours devoted to one topic: finding a quarterback.

“One thing we talked about was size, so they had that ability to look over the top,” Rivera said. “If he’s shorter, you have to make sure they have great movement skills.”

After that meeting Rivera put down the traits they wanted: size, athletic traits, arm talent and quick-twitch throws. Then they looked to see who checked the most boxes. While size was important, they didn’t want to overlook someone who wasn’t at the desired height of 6-foot-3. But if a QB didn’t have the height, he had to show good pocket movement and the ability to find and create passing lanes.

That led them to a list of eight quarterbacks, including Houston’s Deshaun Watson.

The first two were obvious: Aaron Rodgers and Russell Wilson. The Commanders prepped for various scenarios. If they got one of those two, how would their cap look and what moves would they have to make — now and in the future? If they acquired a less expensive quarterback, how could they shape the roster?

But Rodgers and Wilson weren’t viable options. Rodgers wasn’t going to be traded and Seattle rejected Washington’s offer of three first-round picks. Watson’s legal issues, among other factors, made him a no-go. The Commanders also watched film of many other quarterbacks just in case.

At one point they even wondered: Would Andrew Luck, the retired former Colt, want to play again? That went nowhere. But whether it was realistic or a Lloyd Christmas “So you’re telling me there’s a chance” scenario, they wanted to make sure every “i” was dotted.

At some point before the combine, they called Indianapolis about Wentz and were told he wasn’t available.

Then, at the combine, after talking to other teams, they learned Wentz was in play.

While they sat in a suite inside Lucas Oil Stadium, Washington’s staff did another deep dive on Wentz, spending “a couple hours,” Rivera said, watching multiple games and looking at the various throws he made. It wasn’t the first time they had studied him, but it became perhaps the most intense session.

“I wouldn’t say one game [stood out] as much as the throws that were impressive,” Rivera said. “There were some impressive vertical throws, throwing from the far hash to outside the numbers, then some of his tight-window throws on slants and outs.”

They already had performed a deep dive on his analytics. Their internal analytics showed Wentz in the top 10 in numerous categories since he was drafted by the Eagles six years ago. According to ESPN Stats & Information research, he ranks 19th in Total QBR in that time — 12th since 2017.

During his career, Wentz ranks 11th with 140 touchdown passes (and eighth since 2017). He’s eighth in passing attempts of 20 air yards or more — a key for a team that wants to throw downfield more — and tied for 10th in completions.

Numbers don’t tell the full story, of course, but this is noteworthy: During Wentz’s time in the NFL, Washington’s Total QBR ranks 31st and its 98 touchdown passes rank 28th. That, indeed, tells a story as Washington’s record over that stretch is 31-50.

But when watching the games, the Commanders focused on Wentz’s arm, his quick throws and ability to stretch the field — not to mention his movement, which remained evident even if it might have diminished since suffering back and knee injuries with the Eagles.

There are numerous questions about Wentz’s game. They range from his desire to extend plays — sometimes to his team’s detriment — to his inconsistencies with his mechanics, to his turnovers, to a tendency to press in games when his team falls behind.

Booger McFarland says Carson Wentz is only a temporary solution for the “desperate” Commanders.

Not everyone believes Wentz is the long-term solution because of those reasons. He’s thrown 57 interceptions in 3,008 pass attempts. Among the 10 other quarterbacks with at least 2,800 attempts since Wentz entered the NFL, six have thrown more picks and eight have thrown more touchdowns.

But the ability is obvious. Listed at 6-foot-5 and 237 pounds, Wentz can see over the line and has the arm strength to make every throw. That could be down the field, it could be a slant or a shallow crossing route thrown on time. As ESPN NFL analyst Matt Bowen said, Wentz has the ability to attack defenses at the “second and third level” — areas that match well with what Commanders offensive coordinator Scott Turner wants.

“No question it’s a fit,” Bowen said. “He can throw deep in-breakers, skinny posts, challenge vertically down the field. He can make big-time throws. He can extend plays and escape outside the pocket as a runner and make second-reaction plays. That’s vital in today’s NFL.”

Wentz sounds excited to work with Turner: “Just talking with Coach Turner, just his vision for the offense, how he likes to call things and push the ball down the field and the playmakers around you. Just hearing his excitement level with it as well. I think we’re both pretty fired up.”

During the search, Rivera said he received a balanced scouting report on all facets of Wentz. He talked to Doug Pederson and Frank Reich, two of Wentz’s former head coaches. Both praised Wentz, extolling his work ethic and saying he wants to please people.

“It was very interesting,” Rivera said of what he heard. “When you talk to certain people, talk to some coaches he’s had in the past that I know well and listen to what they have to say, it was contradictory to what was happening.”

Washington also felt its locker room, with low-key veterans, would work well with Wentz. And Rivera noticed that after the trade, one of the Colts’ captains, Darius Leonard, tweeted in support of Wentz.

Rivera said the first call he received after the trade was from Reich.

“Frank was tremendous,” Rivera said. “After we made the trade, he said, ‘You’re gonna love this guy … He’s been a good person first and foremost, I want you to know that.’ My intention was to reach out to him but he called to congratulate me.”

After the trade, Rivera had one more conversation with Gibbs, who happened to be in Washington for an event. Rivera said the first thing he told Gibbs was this: