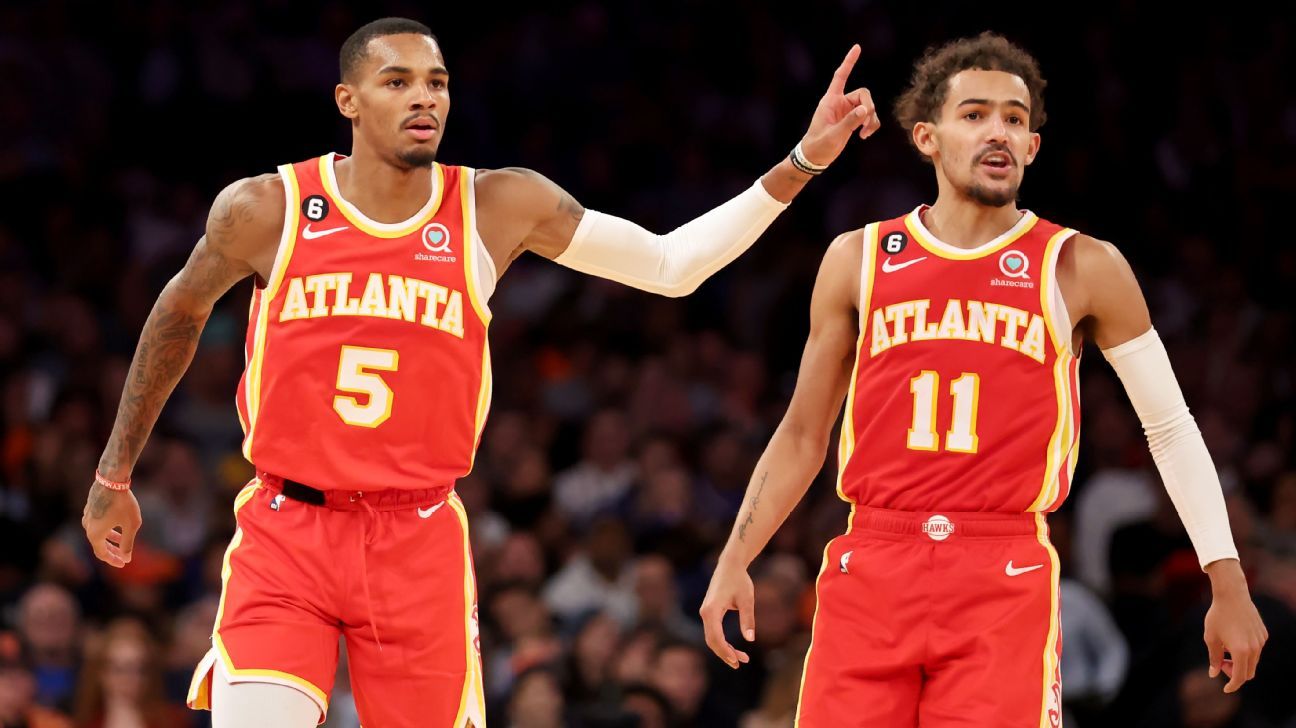 ESPN’s Basketball Power Index (BPI) identified the Hawks as a team to watch (and a potential futures goldmine) in the preseason, with the third-highest BPI score in the Eastern Conference and the highest in the Southeast Division.

Create or join an ESPN Fantasy Basketball league today and draft your league any time before the first game tips off every Monday. Your league starts fresh with 0-0 records for the new matchup period.

Young, for his part, has had the largest offensive impact among point guards in the NBA in two of the last three seasons, per ESPN’s Real Plus Minus (RPM).

And the only point guards to finish higher in Defensive RPM than Murray during each of the past two seasons were Chris Paul and Mike Conley. Murray, a former All-Defensive Team selection, also led the NBA in steals last season with 2.0 per game.

But, when you consider that Young is an extremely high usage player, with a 37.4 USG% that trailed only Luka Doncic, Joel Embiid and Giannis Antetokounmpo in the entire NBA last season, it was hard to see how this partnership could allow Murray to thrive in fantasy basketball.

Murray scored the fifth-most fantasy points in the NBA last season as the primary offensive engine on the Spurs. He was a high usage player himself, with a 27.3 USG% that ranked just ahead of Russell Westbrook and James Harden. How could there be enough points and assists for him to replicate that fantasy success this season, when he’d have to share the ball with Young?

Well, through the first month of the season, Murray is thriving in the ATL. Young has a 35.0 USG% that still ranks fifth in the NBA, trailing the same three players as last season plus Ja Morant. Young is taking two more shots this season, and his 9.3 APG are similar to his 9.7 APG from the last campaign. Everything in Atlanta still runs through Young. But, from the same backcourt, Murray currently has the seventh-most fantasy points in the NBA.

How is this possible?

It starts with the roster construction of the Hawks, where Young and Murray are the only two team-offense creators on the entire roster. No other player on the team averages more than 1.8 APG, and the other three starters combine to average 2.7 APG. While only 23.2% of Murray’s field goals are assisted (and only 13.8% of Young’s), every other Hawks rotation player sans Aaron Holiday gets at least 60% of their field goals assisted. Outside of Young and Murray, almost every other player on the Hawks is purely a finisher.

But, even surrounded by finishers, Murray is still the best scorer on the team with the possible exception of Young. Thus, the starting backcourt absolutely dominates the shot attempts on the team. Murray is also taking more shots (19.1 FGA) this season than last (18.3 FGA), and he and Young combine for almost as many shots per game (41.5 combined FGA) as the other three starters plus the top two bench producers combined (42.7 FGA).

In addition, the Hawks stagger Young’s and Murray’s minutes such that one is almost always on the court. Young plays 35.1 MPG, which means that Murray still gets about a quarter of the game to fill the Ice-Trae-center-of-everything role for the offense. And combining roughly 12 minutes of top-5 usage with 24 minutes of option 1B creator-finisher has allowed Murray not to miss a beat in terms of production compared to his time with the Spurs. His 7.8 APG this season represent a small step back from his 9.2 APG last season, but both his scoring average (21.5 PPG) and his made threes (1.9 3PG) are actually up a bit.

At the other end of the court, the presence of rebound vacuums Clint Capela and John Collins (19.9 combined RPG) in the starting lineup have eaten into Murray’s rebounds. Murray is averaging “only” 6.4 RPG this season after 8.3 RPG last, but that still ranks him among the top-5 pure guard rebounders in the league.

And, the added rim support behind him seems to have allowed Murray to be even more aggressive as a ball hawk. Murray is currently averaging 2.1 SPG, up from his NBA leading 2.0 SPG last season, and his 0.4 BPG also represent a career-best pace.

Put it all together, and Murray is living the fantasy basketball dream in Atlanta (shout-out to the WNBA Atlanta Dream). Averaging 48.6 FP/G through the first month, Murray is well ahead of the pace I projected for him (41.7 FP/G). He’s moved up to 11th in my rest-of-season FBA points rankings, and if LeBron James’ injury lingers, Murray should soon be in the top-10.

Murray missed the 2018-19 season with a torn right ACL but has been reliable in the three seasons since with an average of only eight absences per season. Moving forward with the Hawks, the system is set up for him to play to his maximum capabilities even next to one of the highest usage players in the NBA.

I’d be perfectly happy trading for Murray in fantasy leagues, particularly if you can get him more for his (relatively low) name recognition value and/or from a manager that still questions whether he’ll be able to reach his level next to Young. This would mean that you got him for value, and you know the name of the game: Elite production + good value can often lead to the championship!