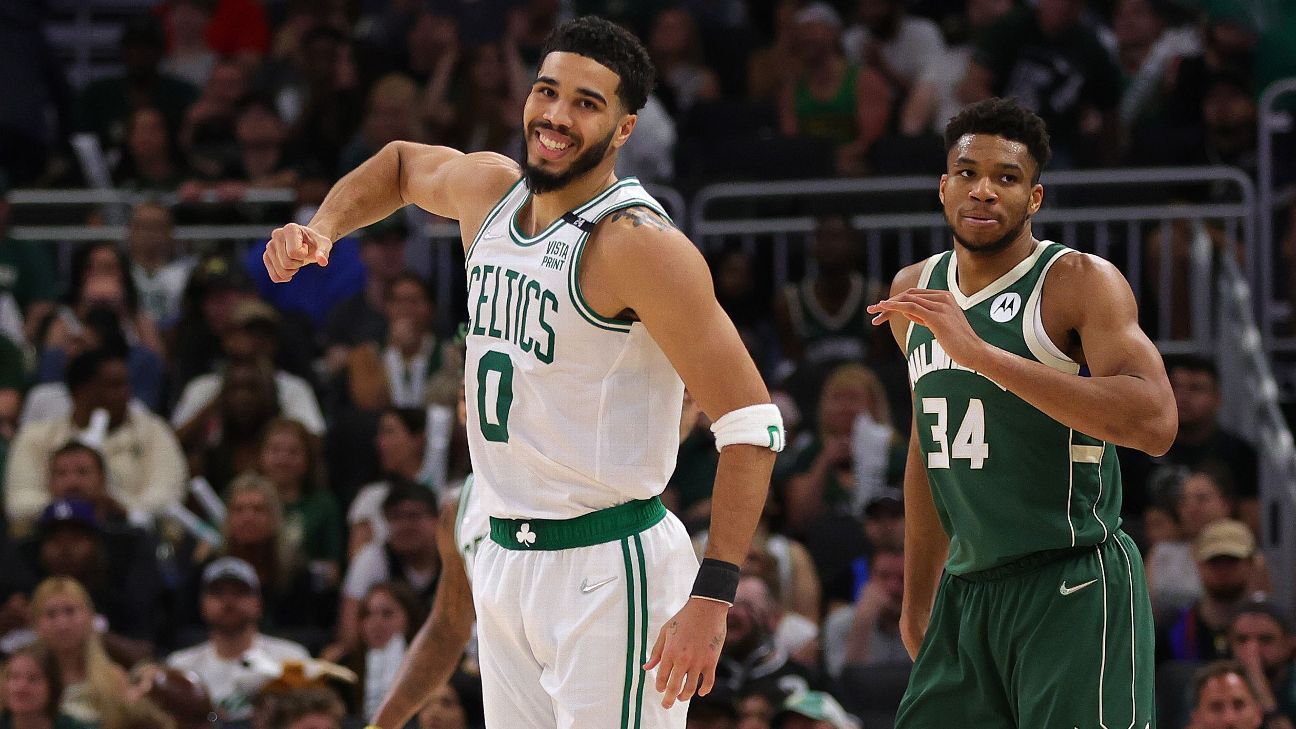 MILWAUKEE — The Giannis Antetokounmpo-Jayson Tatum rivalry is here. It is defining the present of the Eastern Conference and may extend well into the future.

Antetokounmpo is putting up Wilt Chamberlain and Shaquille O’Neal numbers. Tatum is breaking the records of all those retired jerseys for his 75-year-old storied franchise that has 17 championships.

And the Boston Celtics and Milwaukee Bucks haven’t even played Game 7 yet.

This is a black-and-blue series, the ice bag and Advil counts rising by the game. But Antetokounmpo and Tatum made art in Game 6 on Friday night, the Bucks star slamming the Celtics with two-by-fours and the Celtics star responding with high-arching dagger jumpers that cruelly prolonged each punch to the devastated Bucks’ crowd.

The Celtics won 108-95 to even the series, winning for the second time in Milwaukee in the past week. The road teams are 4-2, illustrating just how close these teams are.

Antetokounmpo had 44 points, 20 rebounds and six assists, the third player in history to have a 40/20/5 game in the playoffs, the other two being Chamberlain and O’Neal. He has three 40-point, 10-rebound games this series.

He’s the third player ever to have three 40-point games against the Celtics in the playoffs. The other two are Jerry West in the historic 1969 Finals, when he won the MVP despite the Los Angeles Lakers losing, and LeBron James, who did it in 2018 in one of the most prolific series of his career.

And Tatum is right there with Antetokounmpo. After outscoring, outrebounding, out-assisting, out-stealing and outshooting Brooklyn Nets star Kevin Durant in the first round, Tatum is going right at the current Finals MVP in this series.

Tatum had 46 points Friday, the second-most points for the Celtics in an elimination game in team history behind only Hall of Famer Sam Jones. He’s got two 45-point games in this playoff run — something Larry Bird, John Havlicek, Paul Pierce or Bob Cousy never did for the Celtics.

When the Bucks reduced an 18-point lead down to five with six minutes to play — flashbacks from the Celtics’ blown 14-point fourth quarter lead two days earlier came to mind — Tatum hit a devastatingly long 3-pointer that broke the momentum in perhaps the night’s biggest moment.

“This was our season on the line, and knowing that, you leave it all on the floor,” Tatum said. “That’s the mindset that I have, the mindset that we all have. I wasn’t going to leave anything out there and have any regrets.”

Giannis Antetokounmpo and the Milwaukee Bucks will play at the Boston Celtics in Game 7 of the Eastern Conference semifinals on Sunday at 3:30 p.m. ET (on ABC). Gary Dineen/Getty Images

He made 14 contested shots, according to ESPN Stats & Information research, demoralizing the Bucks and their crowd. They’d all come to Fiserv Forum expecting to see the Bucks win — and why not? This title-winning group had won its past eight closeout-game opportunities.

After a dud in Game 3 in which he played his worst game of the postseason, shooting 4-of-19, Tatum vowed to be better. In the past three games, Tatum has averaged 37 points and 9.3 rebounds. Setting an early tone for the Celtics, he scored 18 points in the first half to give the Celtics a 10-point halftime lead.

The big shots in the fourth quarter, in which Tatum scored 16, were even more valuable. It was exactly the kind of effort a superstar delivers in elimination games.

“That’s why he gets paid the big bucks for moments like that,” said Marcus Smart, who scored 21 points. “I was telling him the whole game, ‘Just be you, man.’ He was.”

Antetokounmpo, playing without the injured Khris Middleton, has ratcheted up his already unfathomable production. He’s averaging 35.3 points, 13.8 rebounds and 6.8 assists in the series. On Friday night, he went 14-of-15 at the foul line.

Get access to exclusive original series, premium articles from our NBA insiders, the full 30 for 30 library and more. Sign up now to unlock everything ESPN+ has to offer.

Tatum and Antetokounmpo, though both blessed with the basketball trinity of height, versatility and skill, are quite different players. Antetokounmpo grew up admiring Magic Johnson and Kevin Garnett. Tatum grew up idolizing Kobe Bryant. You can see it in their games. It’s not the most natural matchup.

But that doesn’t matter. There’s no way to watch what they have done over the past two weeks and not want to see more.

Making proclamations and predictions as to how many times this duo might do this again is foolhardy. Nothing is assured. But Antetokounmpo is 27, Tatum 24.

They’re going to play once more this year. The winner is going to feel like he’s won a prize fight, and the loser is going to be devastated — and lay in wait for another chance. What more can a basketball fan ask for?

“I was excited to play Game 6,” Tatum said. “This was a big moment for myself and the team. We believed, we truly believed, we could come in here and win, and it showed.”

Next post How far is Los Angeles to Hawaii by plane? Check it out | flight time from lax to hawaii