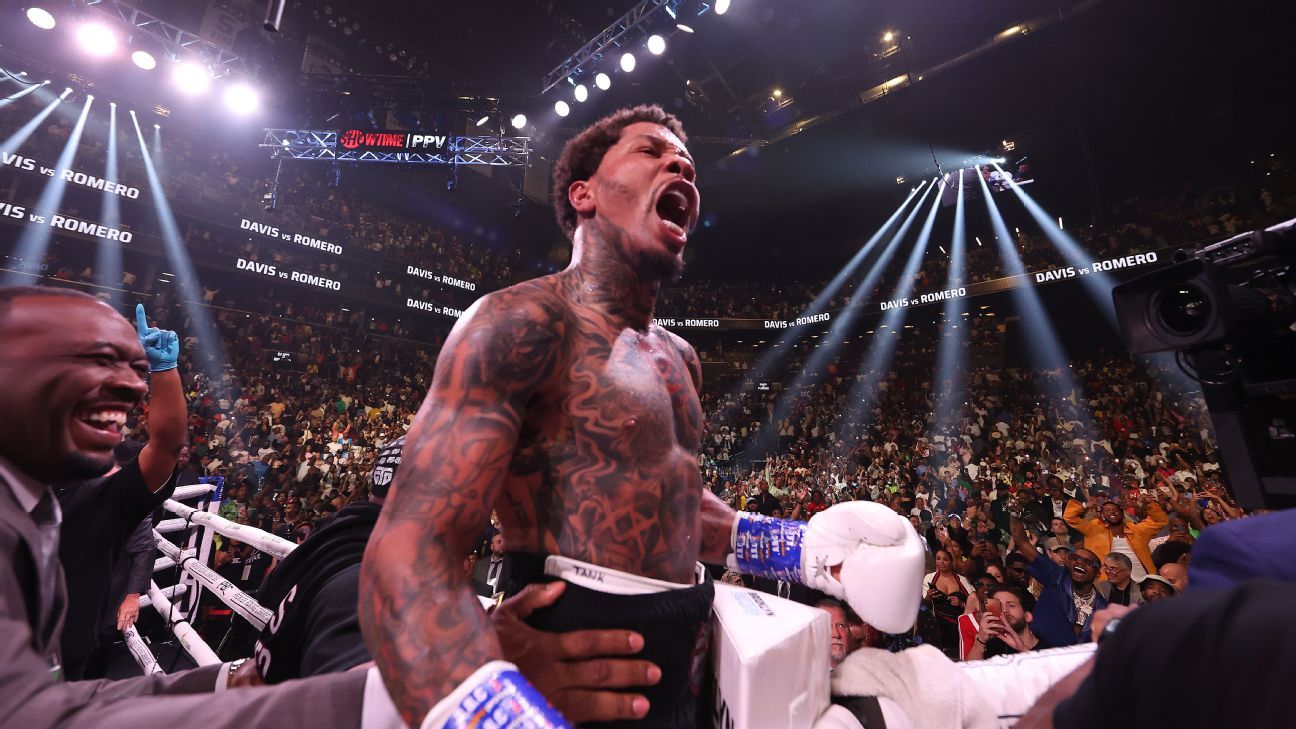 Saturday’s lightweight event at Barclays Center was no different, as 18,970 people were in attendance to see “Tank” Davis send Rolando Romero crashing into the ropes for yet another highlight-reel finish with a sixth-round TKO.

Davis proved once again he is one of the biggest stars in boxing. Barclays Center in Brooklyn? Sold out. His December fight versus Isaac Cruz at Crypto.com Arena in Los Angeles? Another packed house. No matter what city, no matter whom he faces, Davis has left no doubt he is one of the sport’s most bankable athletes.

Now, it’s time for him to step up and fight one of the elite at 135 pounds, the weight class Davis said after Saturday’s bout is his most comfortable.

There’s whomever emerges from next week’s bout between George Kambosos Jr. and Devin Haney for the undisputed championship. The problem is, if Haney wins, Kambosos is entitled to an immediate rematch.

But the biggest bout of them all at 135 pounds? Ryan Garcia.

The win over Romero was the final bout of Davis’ multifight deal with Mayweather Promotions. Tank indicated in the lead-up he is likely to part ways with Floyd Mayweather, who has been his promoter since 2015, in favor of the sort of flexibility Canelo Alvarez enjoys as a free agent. That would certainly remove any obstacles — or excuses — when it comes to pursuing the sort of high-level opponents Davis should be seeking.

“He’s been protected,” Romero told ESPN on Wednesday. “Let’s go down Gervonta’s résumé from the time he won a world title. [Jose] Pedraza, weight-drained 130-pounder. Liam Walsh, chinny, weak U.K. fighter. Francisco Fonseca, who [Davis] hit behind the head and knocked him out in the eighth round.

Of course, Romero was being overly critical ahead of the fight, but he does make some salient points. Davis’ best win to date remains that 2017 TKO of Pedraza to win his first title.

Regardless of opposition, the talent is obvious. And on Saturday, Davis (27-0, 25 KOs) showed a new layer with the kind of patient strategy he employed round after round in the face of a dangerous puncher. He picked his shots. He held on when he felt Romero’s power. It was a mature performance from an ever-growing fighter.

“I know when to take it to my opponents and when to chill out,” Davis, 27, said. “There was someone in the crowd … and they were telling me to press forward, and I was like, ‘Not yet. I got to loosen him up a little more.'”

That’s exactly what Davis did, luring Romero, 26, to the ropes then unleashing the left hand that separated “Rolly” from his senses.

Garcia, who is a top star in his own right and was watching the fight ringside, shouted at Mayweather Promotions’ Leonard Ellerbe afterward in an attempt to call for one of the biggest bouts that can be made in all of boxing.

“Golden Boy is not going to put” Garcia anywhere near Davis, said Ellerbe, who promotes both Davis and Romero (14-1, 12 KOs). “The closest he’s going to get to Gervonta Davis is where he was tonight. He don’t want to fight Tank. It’s all talk. All talk.”

That remains to be seen.

What is clear: Davis doesn’t need a proper dance partner to sell out arenas. But if he wants to truly live up to his immense potential, he needs a fight with someone like Garcia to reach new heights.

Previous post Are zonkeys natural? Check it out | are zonkeys real

Next post What do crows signify spiritually? Check it out | black crow symbolism