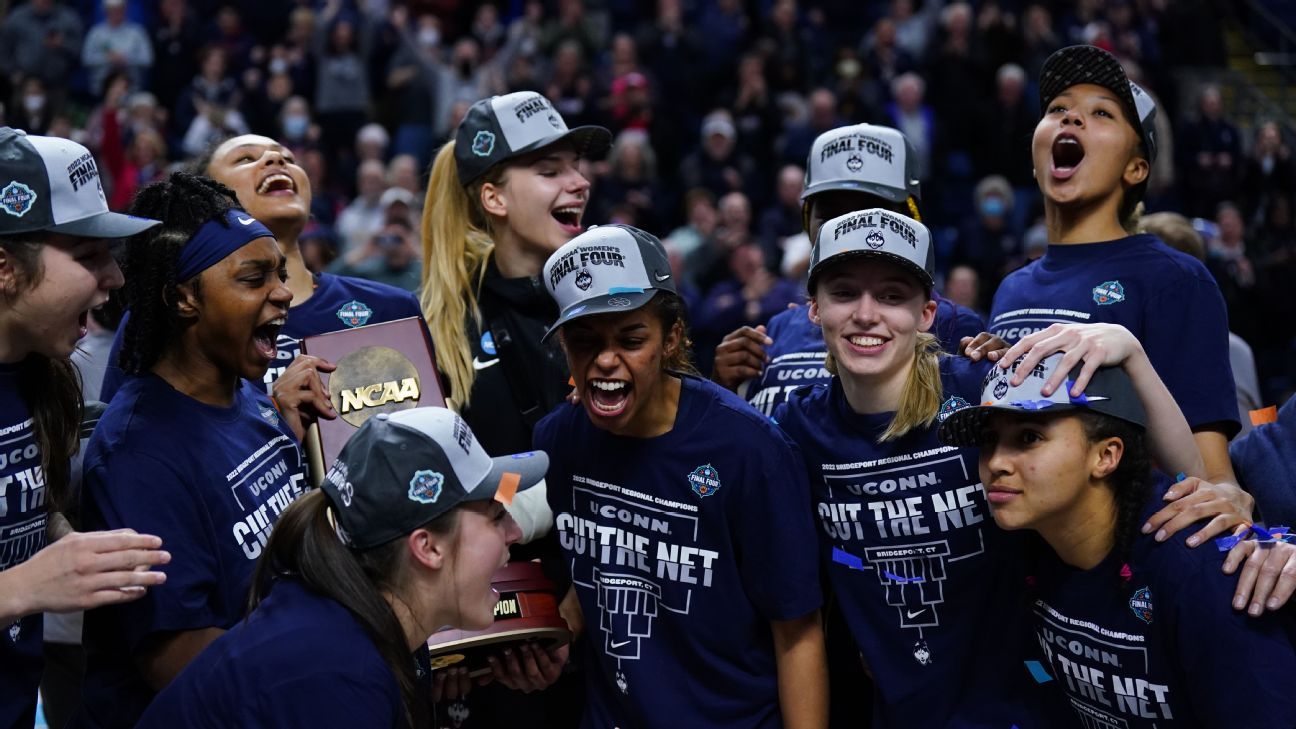 The 2022 women’s Final Four is set. Three No. 1 seeds are making their way to Minneapolis. And after a double-overtime thriller in Bridgeport, Connecticut, the second-seeded UConn Huskies will join the South Carolina Gamecocks, Stanford Cardinal and Louisville Cardinals in the national semifinals.

The Huskies, who knocked off the top-seeded NC State Wolfpack on Monday, punched their ticket to a 14th consecutive Final Four. South Carolina thrashed Creighton on Sunday for a second consecutive trip — dashing the Bluejays’ Cinderella dreams in the process — while defending national champion Stanford squeaked out a win over the Texas Longhorns. Also on Monday, Louisville pulled away down the stretch over the Michigan Wolverines to make its first Final Four since 2018.

Each team brings plenty of talent and intriguing storylines to the table. South Carolina is making its fourth appearance in seven years. As the wire-to-wire AP top-ranked team, the Gamecocks have been the favorite to lift the trophy for much of the season. Louisville is the 1-seed that fashions itself as a plucky underdog. Stanford has been dominant in the tournament and brings a tremendous amount of depth. UConn is the team that has historically entered the postseason among the favorites, but this season has been a different story.

Who will hoist the trophy is anyone’s guess, but the matchups look exquisite.

UConn punched its ticket to a 14th consecutive Final Four with a thrilling 91-87 double-overtime victory over NC State. If there’s one word that describes the Huskies’ season, it is resilience. Dealing with a combination of injuries and illnesses affecting many of its key players, this UConn team is a far cry from the ones that ran roughshod over the Big East without playing a close game. Whether that resilience will be enough to get the Huskies to their first championship game since 2016 is the question.

Complete your bracket by selecting the winner for each game of the women’s NCAA tournament. Play Tournament Challenge

Leading the Huskies is sophomore guard Paige Bueckers. After missing 19 games with a tibial plateau fracture and torn meniscus, Bueckers returned to form against NC State with 27 points. She is the engine for UConn. But the Huskies also have seen key contributions from freshman Azzi Fudd and senior Christyn Williams. While their offense mostly clicked against the Wolfpack, there were spots where the Huskies reverted to “Paige watching,” which bottles them up.

UConn also will likely be without a core player moving forward, as Dorka Juhasz left the Elite Eight matchup in the second quarter with a wrist injury. Her recovery timetable is unknown, but if she is unavailable for the Final Four, UConn will be missing a key competitor who helps the Huskies stretch the floor in a way Aaliyah Edwards and Olivia Nelson-Ododa do not. Juhasz’s absence will no doubt make some things tougher for UConn, but the Huskies have battled through challenging situations all season.

Unlike last season, when the Huskies were favored to move on to the championship game, UConn is a bit of an underdog this year. That’s an unfamiliar feeling in a familiar place for this program. — Barnes

If a team can possibly spin an underdog story out of a No. 1 seed, the Cardinals have certainly done it. They have used the “no one is talking about us” narrative as motivation for the first two weeks of the tournament. They probably won’t have to stop.

With UConn making its 14th straight Final Four, Stanford as the defending champion and South Carolina as the season-long favorite, much of the attention heading into the Final Four is likely to go elsewhere. That doesn’t mean the Cardinals can’t take top billing come Friday night.

If they do, defense will be the driving force, just as it has all season. On Monday, Michigan seemed helpless at times against Louisville’s defense in the Wichita Regional final. The Wolverines repeatedly stared at a dwindling shot clock and scored just one point in the final 6:40 of the game.

Louisville only allowed more than 70 points twice the entire season. And it’s why coach Jeff Walz has preached that if his offense can get to 70, he gives his team a chance. Given that the Cardinals have scored that many only once in the tournament makes their run even more impressive. But Louisville will need someone other than Hailey Van Lith to provide consistent offense. Van Lith, who struggled in the first half of the season, is now a star. She became the first Louisville player to score at least 20 points in four consecutive NCAA tournament games with her 22 in the Elite Eight. Chelsie Hall and Kianna Smith both hit double figures against the Wolverines, which especially helped in the first half. If Emily Engstler, who quarterbacks the defense and does just about everything else (16 rebounds, six steals, four assists but just five points against Michigan), can find her shooting stroke, getting to 70 becomes a reality again.

However, the task gets even more difficult with the nation’s best defense in South Carolina awaiting. If the underdog role has worked so far, Louisville should enjoy it again. South Carolina will be favored and get more of the attention. — Charlie Creme

South Carolina is back in the Final Four, the school’s second consecutive appearance and fourth under coach Dawn Staley. The Gamecocks have made the Final Four in four of the past seven seasons, and they are one step closer to avenging last season’s loss in the national semifinals. Throughout this year’s tournament, the questions surrounding South Carolina have been focused on the team’s offense. The Gamecocks are averaging 69.3 points in their four March Madness games, which is 1.6 below their season average. South Carolina’s regular-season average of 70.8 points ranks 58th in Division I, and since 2000, no national champion has ranked outside the top 25 in scoring, according to ESPN Stats & Information research.

If South Carolina is going to buck that trend, it will be on the strength of its defense. In the second round, the Gamecocks only put up 49 points, but they held Miami to 33. And South Carolina can be equally devastating on the boards. Against Creighton in the Elite Eight, South Carolina snagged 20 more boards than the Bluejays, and that translated into 15 second-chance points as compared to Creighton’s four.

Ultimately, though, how national player of the year hopeful Aliyah Boston plays will dictate South Carolina’s prospects. When Boston gets impactful touches, she changes the game for South Carolina offensively, and she has a tremendous impact defensively, as well. That’s why she’s the only player on the short list for both national player of the year and defensive player of the year. How the supporting cast of Destanni Henderson, Zia Cooke, Brea Beal and Victaria Saxton steps up and takes advantages of the opportunities created by defenses keying on Boston will likely make the difference for the Gamecocks’ championship prospects.

Sometimes the ability to win games, no matter what shape they take, is what makes a champion. And South Carolina — the wire-to-wire AP No. 1 team this season — has proved it can win nearly every way required. — Katie Barnes

Cameron Brink isn’t the reason Stanford won the national championship last year. She could be this year. Brink changes who the Cardinal are from game to game, even quarter to quarter.

A good defensive team becomes great. A versatile lineup becomes impossible to match. That is why coach Tara VanDerveer handles Brink and her propensity for foul trouble with kid gloves. The coach needs her 6-foot-4 sophomore on the floor at the most important moments.

Sunday’s Spokane Regional final had many of them, and Brink was involved in most. After fighting their way to a halftime lead — Brink was on the bench most of the second quarter with two fouls — the Cardinal erupted to start the third, spearheaded by Brink. Her five quick points prompted Stanford to regain command. Minutes later, when Texas’ dribble drive became too much for the Cardinal defense to handle, VanDerveer went to a rarely used zone and invited the Longhorns to throw the ball into the post. She wanted the Longhorns’ Lauren Ebo and Aaliyah Moore to go one-on-one with Brink. They couldn’t. Three Brink blocks later and Texas had to move on to a different plan. Brink single-handedly forced the Longhorns to a new strategy. She scored all 10 of her points in the third and blocked three of her six shots as Stanford took a five-point lead into the final 10 minutes.

Brink is Stanford’s leading scorer and rebounder and the Pac-12 defensive player of the year, but mostly she is the X factor of all X factors. Most nights she’s not even the Cardinal’s best player but instead that secret sauce VanDerveer uses to make the meal just right and prays foul trouble doesn’t ruin. According to Her Hoops Stats, Brink is third in the country in win shares per 40 minutes. That Brink is 23rd in overall win shares underscores how important it is that she’s on the court.

Anna Wilson and Lexie Hull can be more aggressive defensively when Brink is behind them, and defense is really what has turned some early-season disappointment into a 23-game winning streak. Brink gives an equally unique player in Haley Jones — a point guard who averages 7.8 rebounds and 3.7 assists and was last season’s Most Outstanding Player at the Final Four — the perfect landing spot for her outstanding passing skills.

VanDerveer generally manages Brink’s foul trouble or the potential for it brilliantly. Ultimately, there is only so much a coach can do. It’s up to Brink to stay on the court. If she does, Brink will be the most difficult one-on-one matchup — apart from South Carolina’s Boston — on either end of the court in Minneapolis, and Stanford will be in prime position for a second consecutive championship. — Creme

Previous post One in four women experience domestic violence before age 50, analysis finds: Governments are not on track to meet global targets to eliminate violence against women and girls