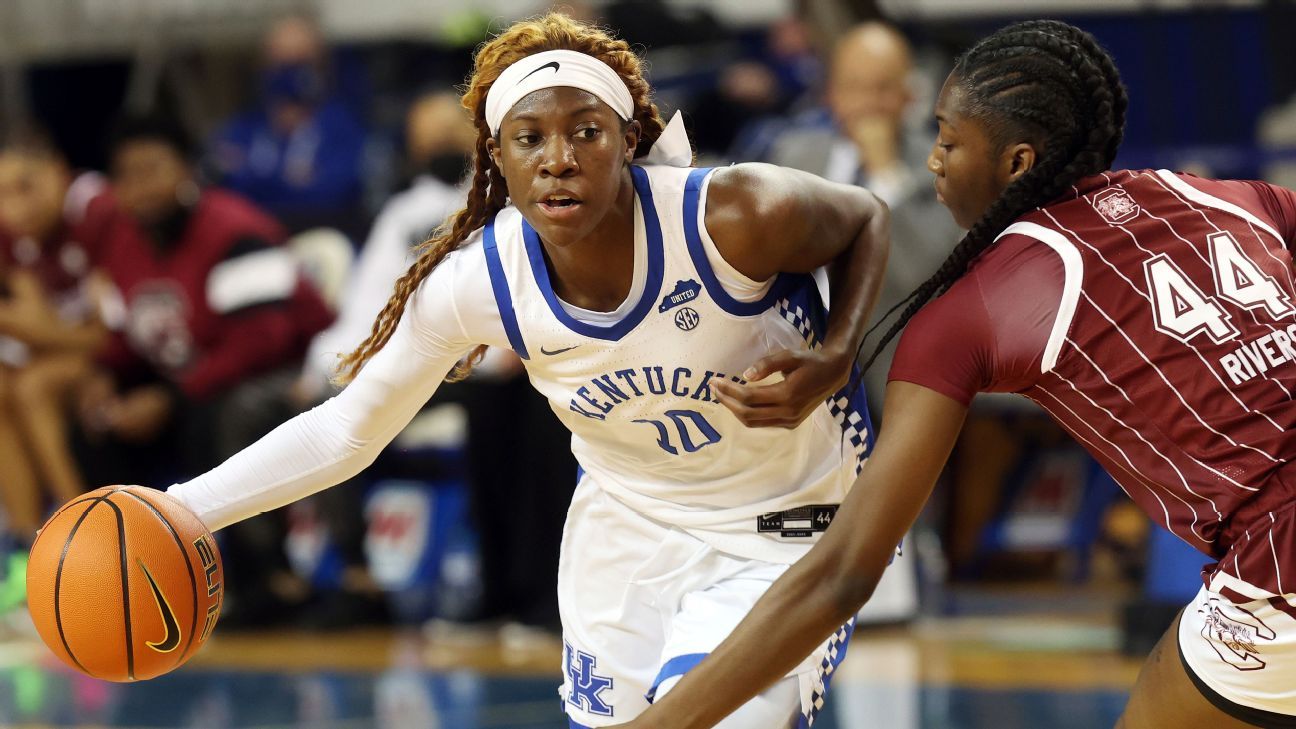 A new wave of talent entered the WNBA on Monday night as 36 players were selected to 12 teams during the 2022 WNBA draft.

Their arrival could change the trajectory of several franchises with the new season set to tip off May 6, and from the new class of rookies are eight players with a strong chance to be immediate contributors in fantasy women’s basketball this season.

The Dream are in the midst of their longest playoff drought in franchise history and desperately needed playmakers with nine unrestricted free agents from 2021. This includes Courtney Williams, who led the team in PPG, APG and RPG last season. Atlanta will return only 35% of its scoring, 31% of its assists and 34% of its rebounding from last season, so Howard will have to fill the void. Howard was an elite finisher and shooter at Kentucky and led the Wildcats in points, rebounds, 3-pointers, steals and blocks during her senior season. She left Lexington ranked second in career scoring average (19.9 PPG), third in career 3-pointers made (214), third in career 3-point field goal percentage (38.1%) and eighth in steals per game (2.3). It should be easy for Howard to adjust to the pro game.

Sign up for your free Fantasy Women’s Basketball league today!
Prepare with projections and fantasy outlooks for the top WNBA players

Smith joins a team that has won just 12 games over the past two seasons and has a combined 40-116 record over the past five seasons. Defense has been a major problem for Indiana. Last season, the Fever were ranked last in the league in defensive rating and their net rating (offensive rating minus defensive rating) was minus-12.5. Smith’s statistical body of work at Baylor and skill set are well suited for the WNBA. She had one of the most decorated seasons in Baylor women’s basketball history and averaged 22.1 PPG with 11.5 RPG. Smith finished her senior season ranked in the top 25 in double-doubles (13), field goals made (217), field goal percentage (56%), free throw attempts (154), free throws made (122) and total points (559). While Smith has a solid post game, she needs to improve from beyond the arc and should have every chance to succeed with a robust role on the Fever.

The Liberty ranked next to last in offensive RPG (6.2), which contributed to their league-low 8.1 second chance PPG. New York also struggled on defense, allowing the most points in the paint of any team last season. Sabally can make an immediate impact in these areas. She finished sixth in scoring (15.4 PPG) and third in rebounding (7.8 RPG) in the Pac-12 last season and also ranked sixth in blocks (1.4 BPG) and fifth in field goal percentage (52.7%).

Although the Sparks have had a very solid offseason, adding Burrell only enhances their ability to score from the perimeter. Burrell is a versatile guard who can stretch the floor. She scored 1,131 points and grabbed 458 rebounds while shooting 40.2% from the field over her college career with Tennessee. While a knee injury kept Burrell sidelined for part of last season, she returned for the SEC and NCAA tournaments and averaged 16.6 PPG, 5.6 RPG and 3.2 APG over her last five games.

As I mentioned above, the Fever had a plethora of glaring needs heading into this draft. Egbo runs the floor well and is a great fit for a team that wants to play more up-tempo this season. Egbo averaged 11 PPG, 8.4 RPG and 1.8 BPG during her senior season at Baylor. The chemistry she had with Smith over the past four seasons at Baylor should continue in Indiana.

The Sun found their replacement for Briann January in Clouden, who finished her four-year career at Michigan State as the No. 2 all-time leader in career points (1,882), leading her team in scoring in each of the past three years. She averaged a career-high 20.0 PPG during her senior season, along with 4.2 RPG, 4.2 APG and 1.2 SPG, while shooting a career-best 39.6% from beyond the arc. Connecticut’s coaching staff will help her quickly acclimate to the pro game.

The Fever wanted energetic, young players who can play defense, and Hull fits that mold. She was a surprise pick in Monday night’s draft as the third of Indiana’s four first-rounders, but the Fever believe in what she brings to the court. Hull averaged 12.5 PPG, 5.1 RPG, 2.0 APG and 2.2 SPG in her senior season at Stanford and is a talented guard who can complement Kelsey Mitchell, Victoria Vivians and Bria Hartley.

Cunane falling out of the first round was shocking. She started 101 of 125 games for NC State and averaged 15 PPG and 8.0 RPG over four seasons. Cunane is the school’s all-time leader in free throws made (513), ranks fifth in rebounds (987), sixth in career points (1,855) and seventh in double-doubles (34). She has first-round pedigree but is on a team that ranked second in scoring (85 PPG) last season. If the 6-foot-5 Cunane is able to make the roster, she has the potential to make a name for herself in the league.