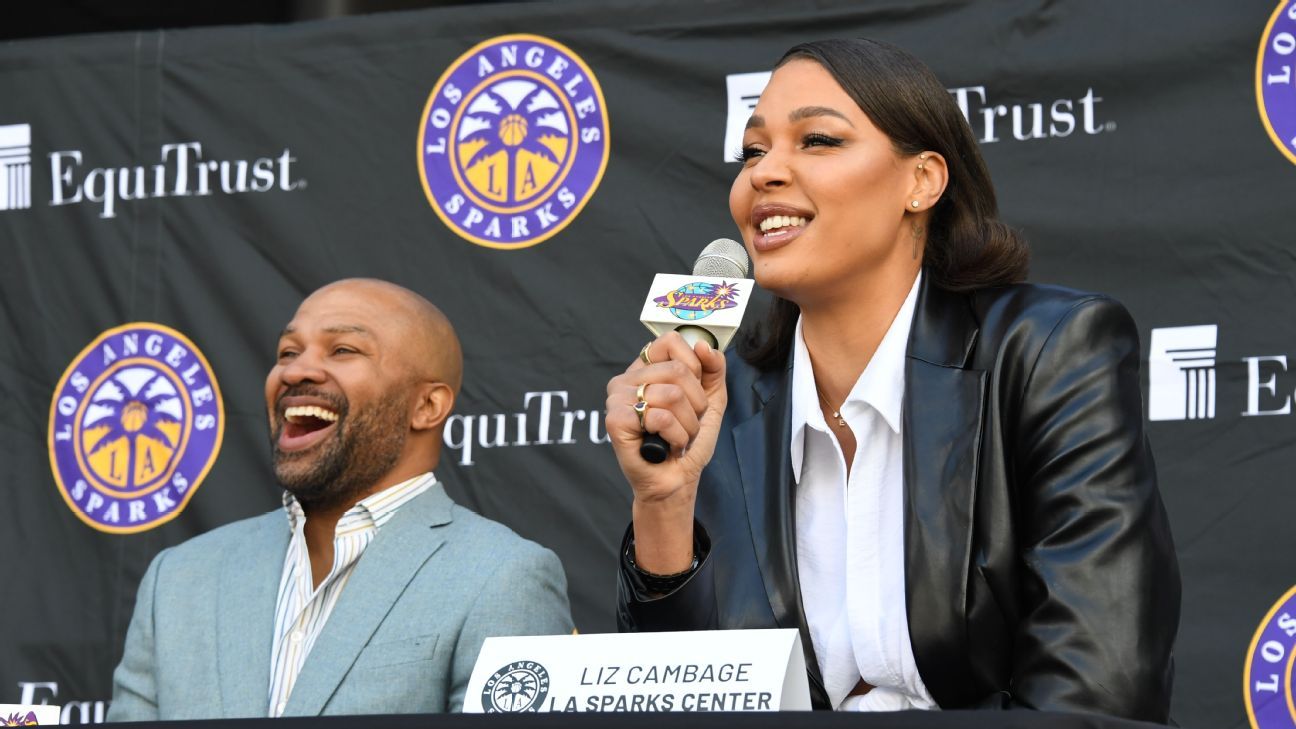 Last season did not go as planned for the Sparks. Derek Fisher’s vision of redefining Los Angeles’ identity was halted by injuries, resulting in four players missing 72% of the possible games. The most notable injured player was Nneka Ogwumike, a perennial All-Star who missed the first half of the season with injuries.

For the first time since 2011, the Sparks did not make the playoffs, as they finished with the second-worst winning percentage in franchise history. Furthermore, the Sparks were one of two teams without an All-Star last season. This offseason, Los Angeles took proactive steps to position themselves as a legitimate playoff contender in 2022.

Sign up for your free Fantasy Women’s Basketball league today!
Prepare with projections and fantasy outlooks for the top WNBA players

Four-time WNBA All-Star Liz Cambage joins the team, signing a one-year deal. With the Las Vegas Aces last season, she finished 19th in scoring, 10th in rebounding, sixth in field goal percentage and fourth in blocked shots. The 6-foot-8 center will help address the deficiencies the Sparks had in terms of rebounding and offensive efficiency a season ago.

Having traded Gabby Williams to Seattle for Katie Lou Samuelson and a first-round pick, the Sparks addressed an area of opportunity. In Samuelson, Los Angeles gains an excellent wing with outside shooting abilities. During her time with Seattle last season, she averaged 7.0 points, 3.5 rebounds and 1.7 assists in 21.0 minutes per game while shooting 45.6% from the field.

Chennedy Carter, who was suspended from the Atlanta Dream last season, can start fresh with the Sparks. Carter also suffered an elbow injury last season. However, she averaged 14.2 PPG in 11 games.

Jordin Canada, the former Seattle Storm point guard, was signed as a free agent. There is a good chance that she will be competing with Arella Guirantes, Lauren Cox, and Jasmine Walker for the final roster spot. Canada isn’t known for her scoring ability, but she brings elite defense, veteran leadership and the ability to get the rest of the team involved.

The Sparks selected four players in this month’s WNBA draft, including Rae Burrell at No. 9 overall and Kianna Smith with the 16th pick. In this draft, Los Angeles was looking for wing players as well as additional shooting, and the players they selected fit their needs. The Sparks made the most of their selections.

The Sparks were a solid defensive team last season. Only the Aces (96) and Connecticut Sun (91.7) had a better defensive rating than Los Angeles (97.5). Offensively, it was a different story. In 2021, L.A. was the league’s lowest-scoring team, averaging 2.5 fewer points per game than the next worst team. Additionally, the Sparks were the worst in assists and assists to turnover ratio in the WNBA.

Los Angeles also had poor rebounding numbers. It finished last in total rebounds. As a positive offensively, the Sparks forced more turnovers than any other team and also led the league in points per game off turnovers. With offseason additions and a healthier roster, the Sparks should improve their offensive woes.

Liz Cambage, C (29.0 projected FP/G): During the 2021 season, Cambage averaged 14.2 PPG, 8.2 RPG, 1.6 BPG and 1.3 APG. Cambage (987) will play a key role for the Sparks and is projected to lead Los Angeles in fantasy points. As part of a loaded frontcourt playing alongside Nneka Ogwumike, Cambage is praised for her efficient scoring and her ability to stretch the floor and make good passes.

Experience the 2022 WNBA season like never before with the first full-featured fantasy league game dedicated to a professional women’s sport. Get a team or start a league today!.

Chennedy Carter, G (26.9 FP/G): In 2022, Carter will serve as the Sparks’ primary point guard. During her first two seasons in the league, she averaged 14.0 PPG and 3.0 APG. In Los Angeles, Carter should be able to replicate those per-game averages. She is likely to be the third offensive option behind Cambage and Ogwumike.

Nneka Ogwumike, F (26.5 FP/G): The addition of Cambage is likely to cut into Ogwumike’s overall usage, but she will still be a reliable fantasy contributor. She played in only 18 games last season because of a knee injury. However, Ogwumike averaged 14.5 PPG, 6.5 RPG, 2.7 APG and 1.4 SPG in 31.7 MPG. She’s a WNBA champion, 2016 MVP and six-time All-Star. Don’t overlook Ogwumike in fantasy drafts.

Katie Lou Samuelson, F (13.8 FP/G): With the opportunity to play in the arena where she attended Sparks games, Samuelson is now back home where she grew up. Samuelson is on her fourth team as she enters her fourth WNBA season, but I believe she’s finally found a WNBA home. Her older sister Karlie has played with the franchise as well. Samuelson and Fisher have not yet discussed how she will fit into his plans, but they have discussed longer-term strategies. It is clear that Fisher and the Sparks organization believe in her. Samuelson will provide Los Angeles with some much needed triples.