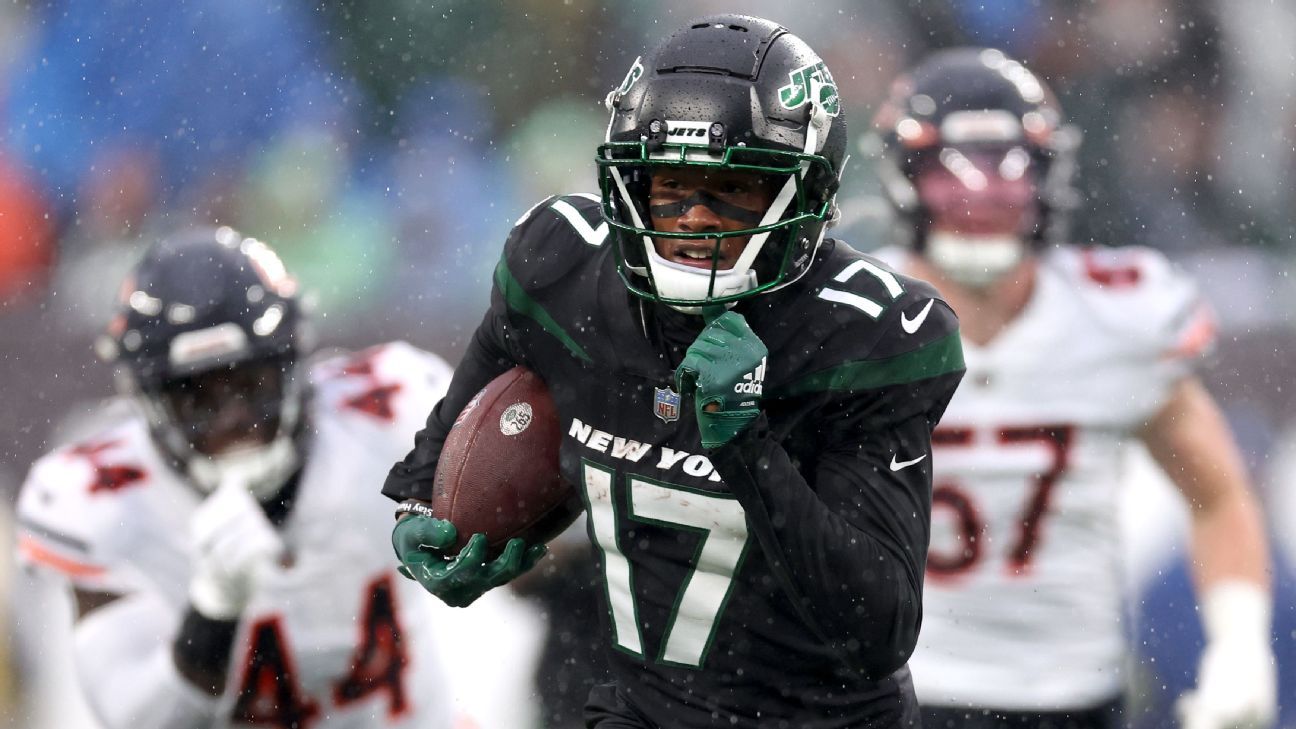 Week 12 of the 2022 fantasy football season featured Garrett Wilson and Mike White of the New York Jets coming up big against the Chicago Bears, and another huge performance by Josh Jacobs. Which other developments from the week are worth reading into? Matt Bowen and Tristan H. Cockcroft offer their analysis.

Thanks in large part to his game-winning 86-yard touchdown on which Next Gen Stats clocked him with a max speed of 20.4 mph, Jacobs scored 48.3 PPR fantasy points in Week 12, obliterating his previous personal best of 36.5 points set only five weeks earlier. That is the second most by any player in a game all season, behind only Joe Mixon’s 55.1 points in Week 9, and it represented the fourth time this season that Jacobs reached the 30-point plateau, putting him in a tie with Patrick Mahomes and Justin Jefferson for the most in the NFL. Additionally, the winning run pushed Jacobs past 300 yards from scrimmage — he finished with 303 — making him only the 11th player since at least 1945, and only the fourth running back, to meet that threshold. Jacobs has been impressive since Week 4, despite his team’s many struggles. He should remain a clear RB1 for the duration. — Cockcroft

Most scrimmage yards in a game

That was a ridiculous day for Jacobs in the Week 12 win over the Seahawks. 48.3 PPR points. 38 touches. 303 total yards. And we can start with the walk-off touchdown run in overtime (on his 33rd carry). I-back set. Downhill scheme. Old school. Jacobs shifted gears on this one, too. He was rolling. The Raiders running back finished the game with 229 yards rushing, but he also added 74 yards receiving on six receptions. And those receiving totals (15 receptions in his past three games) boost the fantasy profile of Jacobs in PPR leagues. With a Week 13 matchup against a suspect Chargers run front, Jacobs should be ranked as a top-three play. — Bowen

With 26.4 PPR points in a 31-10 win over the Bears, Wilson has now posted 17.5 or more PPR points in three of his past four games. And the arrow could really be pointing up on the rookie receiver if he can continue to see consistent quarterback play with Mike White in New York. Wilson saw eight targets on Sunday, catching five passes for 95 yards, and he added two touchdowns. We know he has dynamic ability after the catch. He’s a sudden mover in space. And the Jets can scheme him open, too. Flood concepts, leveled throws in the middle of the field, more. Wilson gets the Vikings’ defense in Week 13. He’ll be an upside WR3 in my rankings for that one. — Bowen

Most scrimmage yards in a game

Rostered in just 2.5% of ESPN leagues, White could be one of the top waiver/streaming pick-ups this week after dropping 24.8 fantasy points on the Bears’ defense. Sure, that Chicago unit was missing players in the secondary. Some JV talent was out there today. And we know that’s not an upper-tier defense. But given the Jets’ lack of a functional pass game with Zach Wilson at quarterback, White is an upgrade for a New York offense that has talent and explosive ability in the route tree. White was efficient in this one, too, completing 22-of-28 passing for 315 yards — with three touchdown throws. He hit the schemed windows, delivered the ball with anticipation inside the numbers and really worked this Bears’ defense at all three levels of the field. And with those numbers, White should stick as the No.1 in New York. Up next for the quarterback? Road games at Minnesota and Buffalo over the next two weeks. — Bowen

Let’s not forget that White had that impressive 26.10-fantasy-point effort in his first career start in Week 8 of last season, then dealt with a forearm issue that knocked him out in the first quarter of the next game, meaning he hasn’t really gotten much of a chance to prove himself at this level. He now has a pair of 24-plus-point performances in his four career starts, with a mostly fantasy-friendly schedule ahead (@MIN, @BUF, DET, JAX, @SEA, @MIA), so I’m with you, Matt — he’s worth adding for streaming/superflex purposes. — Cockcroft

For the second straight game, Lawrence topped the 20-point mark, posting 24.94 points in the Week 12 win over the Ravens. Lawrence was extremely decisive with the ball late in this one, leading a two-minute drill for a score and then hitting a quick out on the 2-point try to win it. Some big-time throws here. With a positive Week 13 matchup versus the Lions, you can roll with Lawrence as a QB1 in the lineup. — Bowen

Eric Moody discusses why fantasy managers should look at him as a high-end QB2 going into Week 13.

Brian Robinson Jr., RB, Washington Commanders: Consider his Week 12 a sneaky-big step forward, after the rookie played 50% of the Commanders’ offensive snaps (to Antonio Gibson’s 40%), totaled 20 touches (to Gibson’s 12) and had three runs of 10-plus yards, the latter two shy of his entire total in his first seven career NFL starts (five). Robinson also added 14- and 8-yard receptions, as he finally delivered big plays that should continue to earn him more looks in the offense. He’s a powerful back who, despite being touchdown-dependent for fantasy purposes, brings enough strength to deliver those most weeks and potentially be a weekly RB2 from this point forward. — Cockcroft

Zay Jones, WR, Jacksonville Jaguars: A key part of the Jaguars’ come-from-behind win over the Ravens, Jones scored a career-best 27.5 PPR fantasy points, including catching the deciding 2-point conversion. He has been increasingly getting looks from Trevor Lawrence, to the point that Jones now has back-to-back games with double-digit targets, not to mention four games in double digits this season alone after having only three of them in 79 career games entering 2022. He has been frequently getting throws when Lawrence is playing from behind, but it’s also a boon that the Jaguars have a mostly fantasy-friendly remaining schedule for wide receivers (@DET, @TEN, DAL, @NYJ, @HOU, TEN). Jones should be rostered everywhere and started as a WR3 for most of those. — Cockcroft

Samaje Perine, RB, Cincinnati Bengals: Filling in for the injured Joe Mixon (concussion), Perine delivered 19.3 PPR fantasy points, a number that looks better when you consider that the opposing Titans entered the week the eighth-toughest schedule adjusted defense against running backs. Perine again had his strongest contribution in the receiving game, catching 4 of 7 passes for 35 yards. If called upon again to fill in for Mixon in Week 13, he should remain a midrange RB2. — Cockcroft

Eric Karabell breaks down how Samaje Perine’s Week 12 performance could come in handy for fantasy managers if Joe Mixon misses the next game.

Rachaad White, RB, Tampa Bay Buccaneers: With Leonard Fournette down with an injury, White posted a season-high 19.9 PPR points in the Week 12 loss to the Browns. And we saw the rookie’s dual-threat traits here. White logged nine receptions — for 45 yards — and he added another 64 yards rushing on 14 carries. If Fournette can’t go in Week 13 versus the Saints, White will stay in the RB2 discussion. — Bowen

Dameon Pierce, RB, Houston Texans:With only eight yards rushing (on five carries) in the Week 12 loss at Miami, Pierce has now logged just 16 yards rushing on 15 total carries in his last two games. Look, this Houston offense is really poor — regardless of who is playing the quarterback position. And the negative game flow continues to impact Pierce’s volume. Pierce does have a positive matchup in Week 13 against the Browns sub-par rush defense, but he’ll remain in my RB2 ranks given the Texans inability to establish offensive rhythm and tempo. — Bowen

James Conner, RB, Arizona Cardinals:In a very positive run game matchup against the Chargers, Connor rushed for 120 yards — on 25 carries. The running back also logged three receptions for 20 yards — with a red zone touchdown grab. Connor, who posted 21 PPR points in this one, has now registered 20 or more PPR points in his past two games. And when he gets the volume, plus the pass game usage, Connor can produce pretty consistent RB2 numbers. Arizona heads into the bye week, but the Cardinals return for a Week 14 game versus New England. — Bowen

DeAndre Carter, WR, Los Angeles Chargers: His 20.3 PPR fantasy point, 10-target performance wasn’t notable only because he set personal bests in both categories. Carter played a significant amount, despite Keenan Allen playing his second game since returning from injury and recapturing his slot-receiver role in which Carter had previously resided, instead aligning out wide as Mike Williams (ankle) was absent this week. Carter played 80% of the Chargers’ offensive snaps (51-of-64) and ran 32 of his 41 routes on the perimeter, a relevant takeaway should Williams need more time to recover. Carter brings plenty of speed to the table, and the Chargers face an extremely fantasy-friendly slate of upcoming matchups, with the Raiders, Dolphins and Titans the next three up. Keep careful tabs on Williams’ health throughout the practice week, as Carter, still available in 94.5% of ESPN leagues, looks like a top waiver pickup for Week 13 and a prospective WR3 play if Williams sits. — Cockcroft

Christian McCaffrey, RB, San Francisco 49ers: You wouldn’t think, in a victory his team controlled for the near entirety, that McCaffrey would play as sparsely as he did or score the number of PPR fantasy points that he did (8.9). In fact, among team wins in which McCaffrey played at least 40 offensive snaps, that was his fewest of his entire career, and even including the losses of 40-plus snaps, it was fifth fewest. He also played only 63% of the offensive snaps, a puzzling level of usage especially considering Elijah Mitchell left early with a knee injury. If the 49ers’ intent is to take a committee approach to their backfield, as was the case here with Jordan Mason stepping in for Mitchell late in the contest, McCaffrey might deliver the occasionally frustrating output like this again. Nevertheless, he’s too talented to be regarded as anything beneath a high-end RB1. — Cockcroft

Next post The Broncos just hit rock bottom: How Russell Wilson has

LOS ANGELES — Martin Truex Jr. won NASCAR’s return to the Los Angeles Memorial Coliseum for its season-opening exhibition race — a sloppy Sunday night extravaganza in which the Wiz Khalifa halftime show might have been the most entertaining part of the event.Truex took the lead with 25 laps to go in the Busch Light…