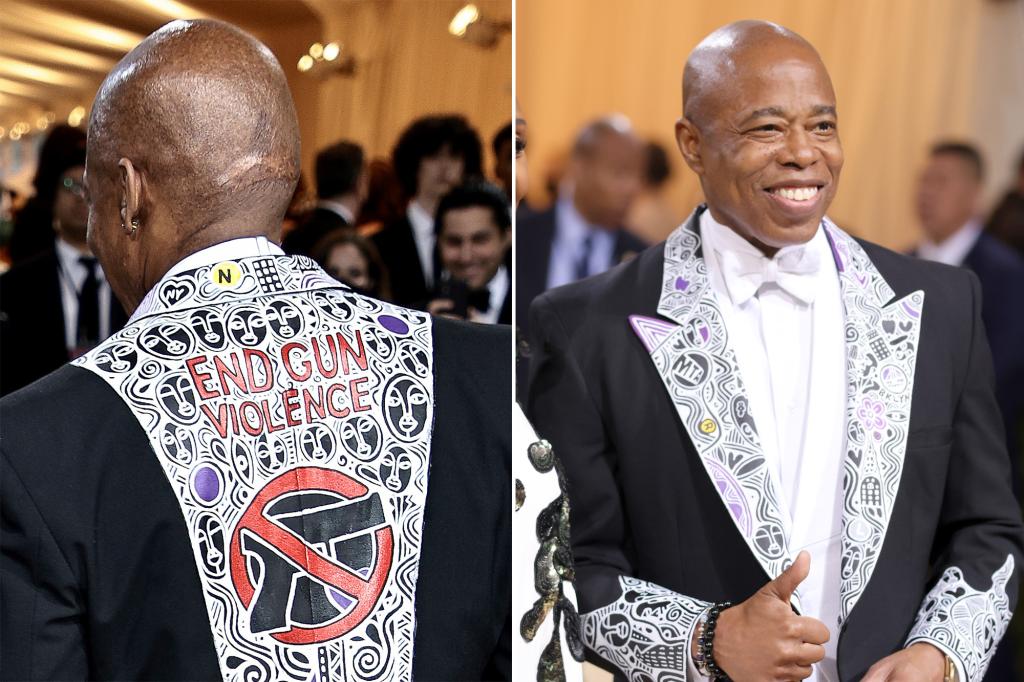 After “dying to go” to the Met Gala “for years,” New York City Mayor Eric Adams finally got his wish.

Adorned with custom art from Laolu, a Nigerian artist who is based in New York City, the mayor’s outfit made a plea to “End Gun Violence.”

The suit was already hanging in his closet and Laolu turned it into his canvas, drawing the phrase with a pistol in a red circle with a prohibitive slash across it.

“The mayor has a great sense of style. And he came up with the idea” of working with Laolu, Adam’s press secretary Fabien Levy told The Post. “He wants to send a message specifically. One of the things that is causing problems in our society is gun violence.” 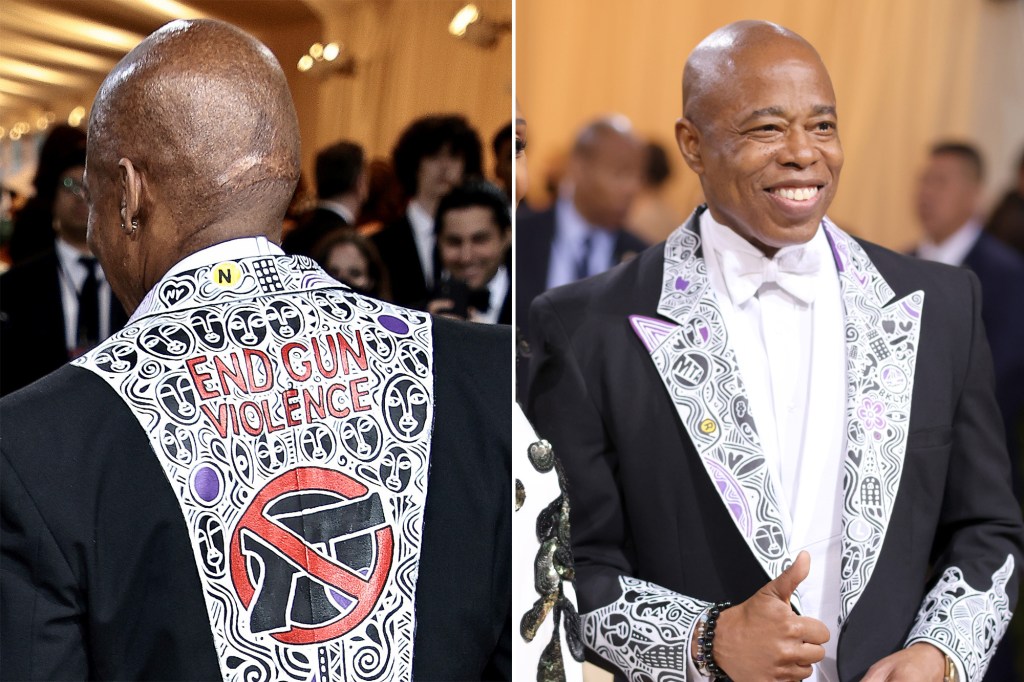 Levy added that the faces on the jacket represent young children who lost their lives to senseless gun violence.

Laolu, who practiced law in his native Nigeria, infuses his art with his Yoruba heritage and aesthetic, and he has worked with other celebrities such as Taraji P. Henson, Lupita Nyongo, Alicia Keys, Swizz Beats and Beyonce.

But the artist and the mayor also kept with the gala’s theme of “Gilded Glamour.” And so the suit features depictions of other enduring Big Apple innovations that came about during the Gilded Age, including the Brooklyn Bridge and the railways.

Then there are nods to the subways, such as the R and the N train, the same line where accused subway shooter Frank James opened fire inside a crowded train last month, shooting ten and leaving another 19 injured. 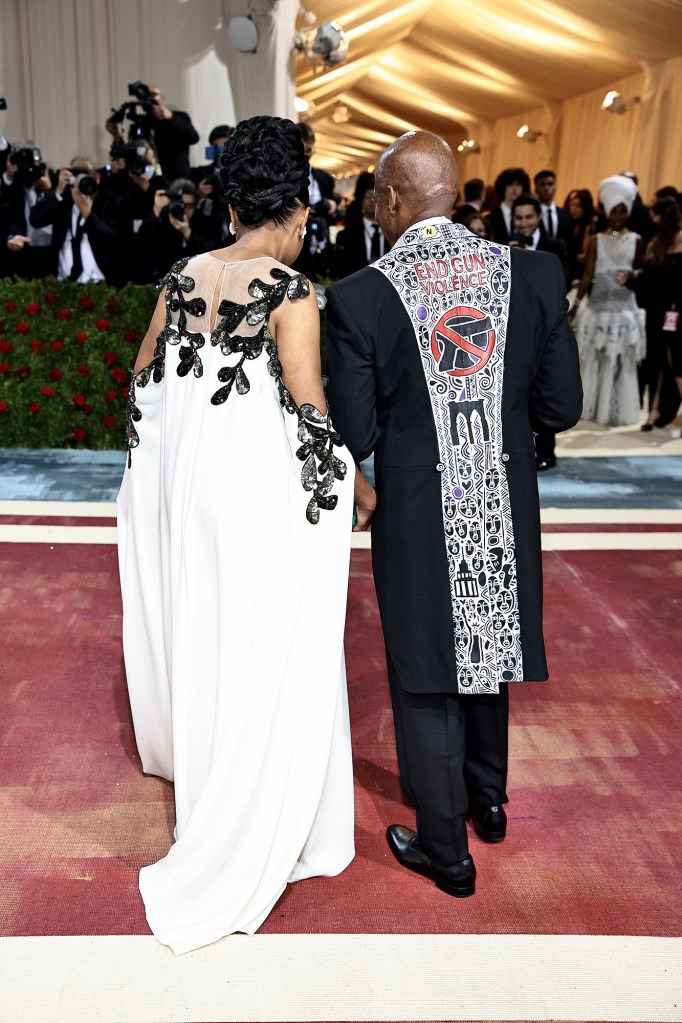 His jacket read “END GUN VIOLENCE” on the back.Getty Images for The Met Museum/

Adams’ move to make a political statement on the red carpet follows Alexandria Ocasio-Cortez, who wore a gown last year that read “TAX THE RICH.”

His look was also complete with a fresh pedicure, which he debuted on Twitter. His Monday appointment confirmed his appearance on one of celebrity fashion’s biggest nights after some speculation.

Known for his keen sense of fashion, Adams has kept up his style while serving as mayor, most notably his custom suits from the high-end Mohan Custom Tailors, which ring in at $2,000 apiece.

And he’s no stranger to the fashion-forward life, having attended New York Fashion Week in February — seated next to Anna Wintour, no less. He’s also chummy with Naomi Campbell and Jon Batiste, and has been pictured with Cara Delevingne and A$AP Rocky. 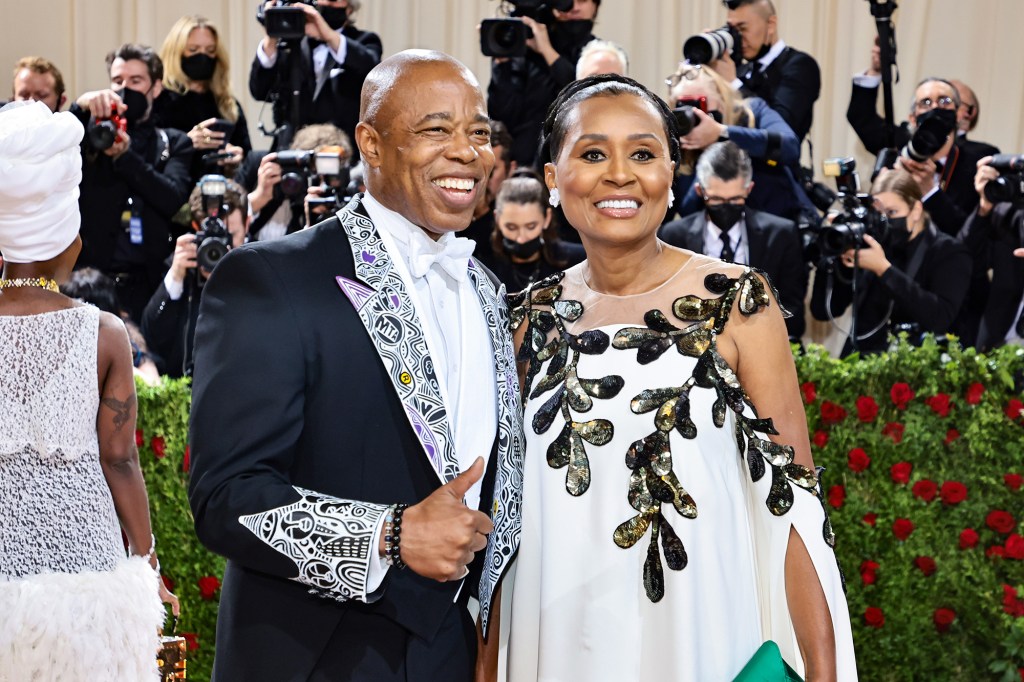 His suit had a graphic lapel and forearms, which matched the back of the coat.Getty Images

Despite the life of seeming glitz, glamor and luxury, lawyer and lobbyist Brad Gerstman, who listed Adams on his Best Dressed Politicians roundup, said the mayor isn’t allowed to accept clothes for free or discounted — including for the Met Gala.

Known now as the mayor of nightlife in the Big Apple, the Met Gala won’t be his first rodeo — and probably not his last — after appearing at other star-studded events, such as the opening night of “The Music Man” on Broadway earlier this year.